Malaria is one of the most severe public health problems worldwide. Here, we investigated the ameliorative role of berberine against Plasmodium chabaudi-induced spleen injury. Mice were divided into 3 groups. The first group served as a vehicle control, the second group was infected with 103 P. chabaudi infected erythrocytes and the third group was infected with P. chabaudi then treated with 10 mg/kg berberine for 10 days. Berberine was significantly able to lower the percentage of parasitemia. The infection induced splenomegaly and spleen injury. This was evidenced by fused splenic white pulp areas, diffuses appearance of the marginal zones, and increased number of macrophages in the red pulp. These changes in spleen led to the increased histological score. Berberine treatment caused a marked improvement in the splenic architecture and could offer protection against spleen tissue injury. Further studies are required to know the mechanism of berberine action against murine malaria.

Malaria is still a major health threat, however a safe and effective anti-malaria vaccine is not available [1]. This is somewhat astonishing as natural immunity can be acquired against the blood stages of the infectious agents, protozoan parasites of the genus Plasmodium [2].

A convenient model is the blood-stage malaria Plasmodium chabaudi, which shares several characteristics with the most virulent human-pathogenic species P. falciparum [3]. This has urged on intensive drug discovery endeavors geared towards identifying novel, potent and cheap antimalarial drugs. However, the identification of quality leads from natural sources would significantly augment these efforts.

Berberine is an alkaloid extracted from various plants used in Traditional Chinese Medicine [4]. Previous studies have shown that berberine has a wide-ranging pharmacological and biological activities including antiprotozoal infection [5].

The spleen is widely assumed as to be the major effector site against blood-stage malaria [6,7]. The present study was aimed to investigate the ameliorative role of berberine against Plasmodium chabaudi-induced spleen tissue damage.

Twenty-four male Swiss albino mice were bred under specified pathogen-free conditions and fed a standard diet and water ad libitum. The experiments were performed only with mice at an age of 9-11 weeks and were approved by state authorities and followed Saudi Arabian rules for animal protection.

Blood stages of P. chabaudi were weekly examined in mice. Experimental animals were challenged with 103 P. chabaudi-parasitized erythrocytes. Parasitemia was evaluated in Giemsa stained blood smears, and total erythrocytes were counted in a Neubauer chamber.

Mice were allocated into three groups. The first group was the non-infected control group. The second and the third groups were infected with 1000 Plasmodium chabaudi-parasitized erythrocytes. The third group was orally inoculated with 10 mg/kg berberine chloride for 10 days [8]. Animals were dissected after 10 days post-infection with P. chabaudi

Mice spleens were fixed in neutral buffered formalin and then embedded in paraffin. Sections of 5 μm thickness were stained with hematoxylin and eosin. To evaluate the splenic histological alteration, a semi-quantitative scoring system was used [9]. Segments of spleen were scored for the enlargement of white pulp areas (0, absent; 1, slight; 2, moderate; and 3, pronounced) and for the increased numbers of apoptotic cells, macrophages, necrotic cells and presence of pigments (0, absent; and 1, present). Scoring of each tissue sample represented the mean score of high microscopic power fields of five different sections.

The change in capsule thickness was calculated in 5 different fields in the spleen of each mouse.

Student’s t-test was performed and P ≤ 0.05 is considered to be statistically significant.

Berberine was able to reduce the increased spleen index (Fig. 2).

Infection induced splenic vacuolation of some cells. Also, most of the cells were darkly stained and the sinusoidal spaces became larger. The histological lesion showed some improvements after treatment with berberine (Fig. 3, 4). Treatment of infected mice with berberine could improve the splenic architecture (Fig. 3,4).

Also, the capsule of the spleen was decreased in thickness compared to that of the control spleen (Fig. 5). Berberine was able to improve the change in spleen thickness (Fig. 5). 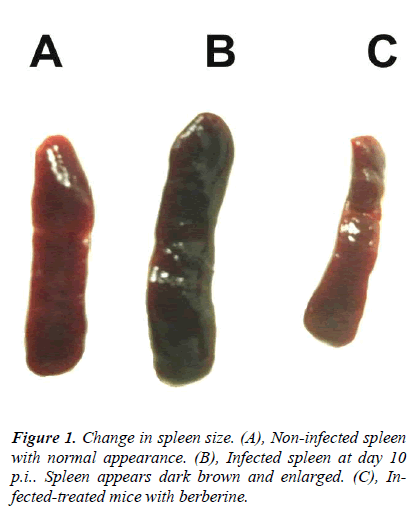 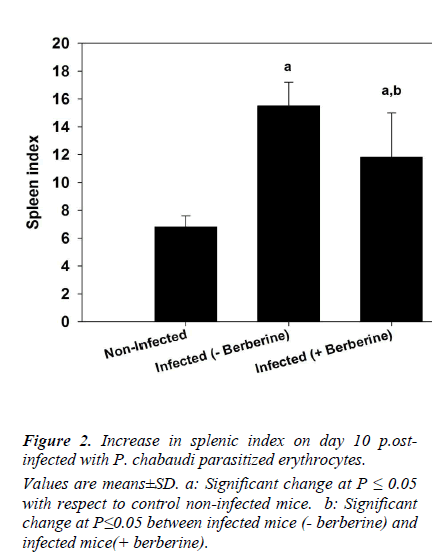 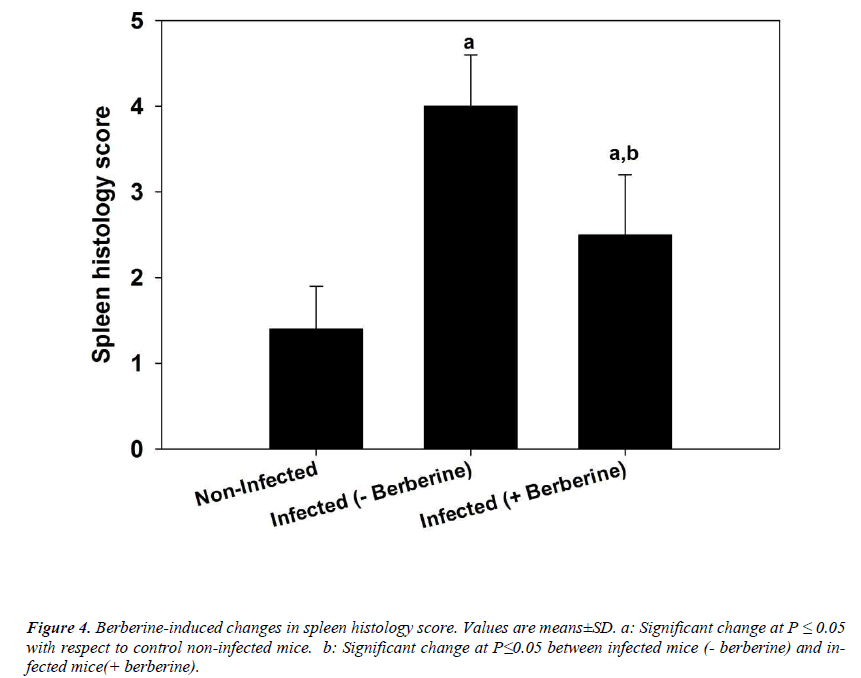 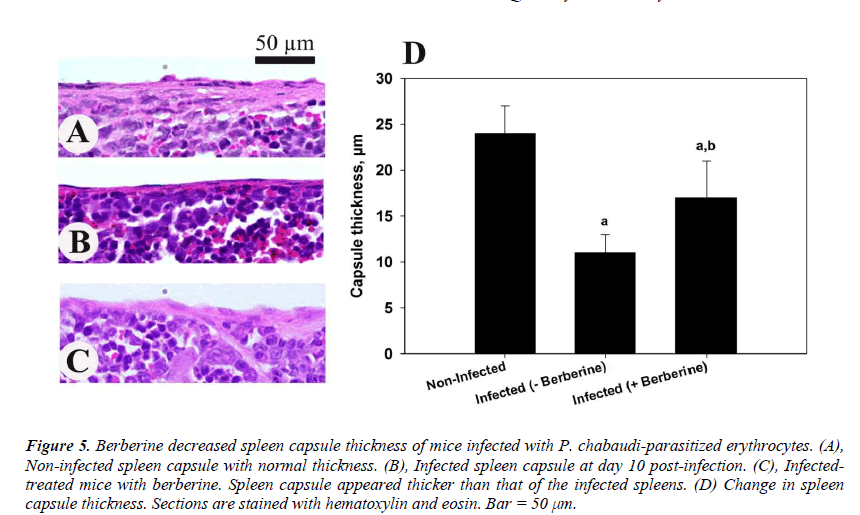 The initial hope underlying the present study was to find a natural product with anti-malarial properties. Berberine was able to reduce the percentage of parasitemia on day 10 post-infection. The antimalarial activity of berberine and its its ability to significantly decrease the number of infected erythrocytes. This clearance might be mediated by both acquired and innate immune responses [10].

Enlarged spleens, presumably be due to malaria and found in Egyptian mummies of more than 3000 years old, and the Ebers Papyrus (c. 1570 b.c.) mentioned splenomegaly, fevers and a variety of cures for such ailments [11]. The spleen is considered to be an effector against P. chabaudi Infection [7]. The widening of white and red pulps is due to splenomegaly where the spleen increases in size due to malaria infection. The splenomegaly due to infection with P. chabaudi has been reported by Dkhil [7]. Krueken et al. [6] stated that splenomegaly is due to increased number of macrophages [6].

The spleen histology is affected by malaria infection [7]. The splenic cells including T-cells and B-cells are disorganized during the infection. This led to changes in splenic architecture [7].

Berberine has significant antimicrobial activity against a variety of organisms [12] and has strong anti-malarial activities [13,14]. It has a high clearance rate of asexual parasitemia [15]. It also inhibits telomerase activity of P. falciparum in a dose-dependent manner [16]. It interacts with plasmodium DNA effectively [17].

The authors would like to extend their sincere appreciations to the Deanship of Scientific Research at King Saud University for funding this Research group (RGP-198).