Bacteriological and antibiogram of AmpC producing Enterobacteriaceae isolated from abattoir.

Owing to the continued threat of antimicrobial resistance, it is critical that farmers and clinicians take the necessary steps to use antibiotics rationally in their respective practices, and only opt for it when all other options must have been exhausted. AmpC enzymes mediate bacteria resistance to the cephamycins such as cefotetan and cefoxitin which are important antibiotics used clinically to treat and manage bacterial related infections. This study phenotypically evaluated the prevalence and antibiogram of Enterobacteriaceae that produced AmpC enzymes. Fifty (50) anal swab samples from the anal region of cows in an abattoir in Abakaliki, Nigeria were bacteriologically analyzed. The isolation and identification of bacteria isolates were carried out using standard microbiology techniques. Antibiogram was evaluated using disk diffusion technique while AmpC enzyme production was detected using the ceftazidime imipenem antagonism test. Our results show that a total of 7 (14%) E. coli and 12 (24%) isolates of Klebsiella species was isolated. The antibiogram results showed that the isolated Klebsiella species and E. coli isolates exhibited reduced susceptibility to cloxacillin (100%), ertapenem (83.3%), cefoxitin (66.7%) and ceftazidime (58.3%) for Klebsiella species; and cefoxitin (71.4%), ertapenem (28.6%) and ceftazidime (28.6%) for isolates of E. coli. AmpC enzyme production was detected in 5 (71%) isolates of E. coli and 9 (75%) isolates of Klebsiella species. The AmpC producing E. coli and Klebsiella species were multiply resistant to over 4 antibiotics found in the class: fluoroquinolones, carbapenems, aminoglycosides and penicillins. Antibiotic usage in animal husbandry allows drug resistant bacteria such as those that produce AmpC enzymes to evolve and spread. This has implication for the general public since AmpC producing bacteria are notably resistant to 2nd generation cephalosporins which are used clinically for the treatment of serious bacterial infections. Continuous monitoring of the antibiotic resistance profile in abattoir and poultry isolates is recommended as a panacea to contain the problem of antibiotic resistance in the non-hospital environment.

A remarkable therapeutic success heralded the introduction of antibiotics into clinical medicine as a panacea to treating and containing the nefarious activities of pathogenic microbes. Irrespective of the help of antibiotics in reducing the rate of morbidity and mortality due to infectious disease agents especially bacteria, some bacterial pathogens have evolved mechanisms with which to become resistant to the antimicrobial onslaught of antimicrobial agents in their environment.This phenomenon has allowed some multidrug resistant bacterial pathogens including those that produce AmpC enzymes to emerge and spread almost uncontrollably. Antibiotics have been used extensively in veterinary medicine and in agriculture; and their usage in livestock feeds at sub-therapeutic doses to promote growth and increase feed efficiency has contributed to antimicrobial resistance cases [1-3]. AmpC β-lactamases are produced by many Enterobacteriaceae strains, and they mediate bacterial resistance to cefotetan and cefoxitin [4-6]. They are carried on the genetic elements of many Enterobacteriaceae and some other bacteria such as Pseudomonas and Acinetobacter where they cause resistance to cephamycins and other betalactam agents [7-9]. The non-medical uses of antimicrobial agents allow bacteria to develop resistance through selective pressure. Previous reports on the prevalence and spread of drug resistant bacteria in the community give impetus to the irrational use of antimicrobial agents for non-clinical purposes [10,11]. The prevalence of infections with multidrug resistant Enterobacteriaceae has steadily increased over the years; and this has impacted negatively on the health of the general public [11-14]. Enterobacteriaceae producing AmpC beta-lactamases have become a major therapeutic challenge as well, since this type of resistance mechanism mediate bacterial resistance to the cephamycins. The detection and reporting of AmpC-producing Gram negative bacteria is therefore of significant clinical relevance since AmpC producers may appear susceptible to expanded-spectrum cephalosporins when initially tested [15]. In this study, the prevalence of AmpC-producing Klebsiella species and E. coli isolates were phenotypically investigated.

Collection and processing of samples

The samples (n=50) used for this study were collected from the anal region of cows from a local abattoir in Abakaliki metropolis, Ebonyi State, Nigeria. The samples were collected using sterile swab sticks soaked in normal saline. The collected samples was returned to their respective containers and labeled. All samples were bacteriologically analyzed within one hour of collection at the Microbiology Laboratory Unit of Ebonyi State University, Abakaliki. Each of the collected samples was inserted into 5 ml of freshly prepared nutrient broth (Oxoid, UK), and incubated at 30°C overnight. Bacterial growth was identified by the presence of turbidity or cloudiness in the broth culture after incubation [16].

Bacterial strains that produce AmpC beta-lactamase enzymes are resistant to the cephamycins but susceptible to the fourth generation cephalosporin, cefepime [9,17]. The susceptibility of the test isolates to cefoxitin disk (30 µg) was used as the primary screening test to screen all the isolates for possible production of AmpC enzymes. All bacterial isolates were each subjected to the antimicrobial activity of cefoxitin disk (30 µg) on an aseptically streaked MH agar plates, and these were incubated at 30°C for 18-24 h. The production of AmpC enzyme was suspected in those test isolates that showed resistance to cefoxitin disk based on the CLSI breakpoints [17,18]. Test isolates showing inhibition zone diameter (IZD)<18 mm were suspected for the production of AmpC beta-lactamase enzyme.

Ceftazidime-imipenem antagonism test (CIAT) was used to confirm AmpC enzyme production in the bacterial isolates. This was performed using ceftazidime (30 µg), cefoxitin (30 µg) and imipenem (10 µg) (Oxoid, UK). Ceftazidime disc and imipenem disk were placed at a distance of 20 mm apart on MH agar plate previously inoculated with a suspension of the test bacteria (adjusted to 0.5 McFarland turbidity standards). Cefoxitin disk (30 µg) was also placed at a distance of 20 mm from the ceftazidime disk for comparison. Incubation was at 30°C overnight. AmpC beta-lactamase production was inferred by antagonism indicated by a visible reduction in the inhibition zone around the ceftazidime disk adjacent to the imipenem or cefoxitin disk [5].

This was calculated to determine the multiple antibiotic resistance profile of the isolated Klebsiella species and E. coli isolates that were positive for AmpC enzyme production. This was done according to the method of Akinjogunla and Enabulele [19]. MARI was calculated using the formula: MARI=a/b;where ‘a’ represents the number of antibiotics which the resistant bacteria was resistant to; and ‘b’ represents the total number of antibiotics to which the resistant bacteria has been evaluated for. 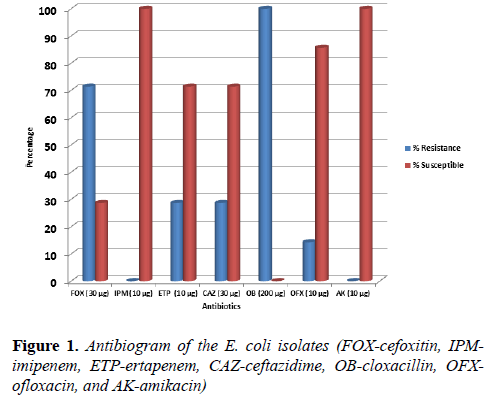 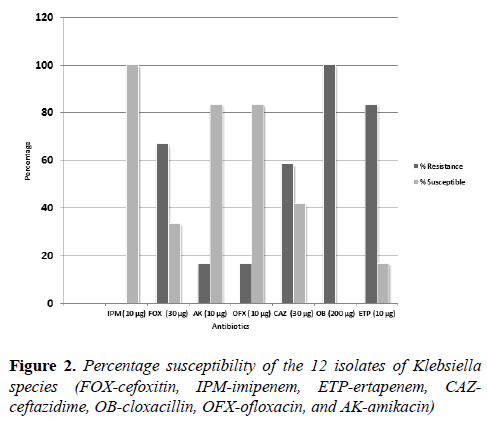 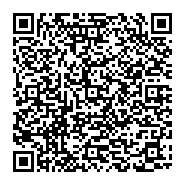