Objective: Joints displacement has been introduced in treating intertrochanteric fracture. However, the studies on the treatment of femoral prothesis stem in elderly patients are very rare. This study aimed to observe the curative effect of auxiliary biological cemented femoral stem in treating elderly patients with unstable intertrochanteric fracture.

Methods: From January 2012 to January 2016, 85 elderly patients with intertrochanteric fracture in our department were randomly divided into two groups (control group, n=42 and observation group, n=43), who were treated with auxiliary biology cemented femoral stem replacement and biological artificial hip replacement with lengthened handle, respectively. The related clinical data were collected and compared.

The patients with intertrochanteric fracture who have received prothesis replacement in our hospital from January 2012 to January 2016 were enrolled. The patients were divided into observation group and control group by the random number table method (observation group, n=43 and control group, n=42). The differences on sex, age, fracture type, injury cause, joint functions, complications and other general information between two groups were not statistically significant (P>0.05). This study was approved by the local ethical committee, and all patients signed the informed consent form.

Inclusion criteria were described as follows: 1) in accordance with the diagnostic criteria of intertrochanteric fracture; 2) with the age of no less than 66 years old; 3) with the indication of artificial hip joint replacement; 4) normal walking without or with single stick before intertrochanteric fracture; 5) Evans- Jensen type III-V fracture complicated with many underlying diseases, inappropriate for long-term bedridden after the surgery or complicated with serious osteoporosis; or Evans-Jensen type II fracture with the contraindication of fracture reduction and internal fixation. Patients with new or old cerebral thrombosis or Evans-Jensen type I fracture, or cardiac insufficiency, or pathological fracture of femoral neck or complicated with coagulation disorders and mental diseases were excluded.

The patients in control group were treated with biological type lengthened handle artificial hip replacement, while observation group were treated by bone cement auxiliary ordinary biology stem of artificial hip joint replacement. Subarachnoid block combined epidural anesthesia was adopted for all patients, patients were required to keep side-lying position and hip postlateral approach was used in their treatment. When cutting the femoral neck, since this fracture was always complicated with the fracture of the base in femoral neck, be sure to keep the greater trochanter, lesser trochanter and fascial fiber attached. Use a smaller drill to ream to avoid injuring bone cortex. Make an incision in proximal femoral medullary cavity. In the observation group, the distal medullary cavity was usually spacious, so it should only consider filling the proximal prosthesis and determine the type of the prosthesis. Set the cement plug 1 cm further than distal prosthesis; during the earlier period of wire drawing, 5 to 10 ml bone cement should be injected into the distal end of medullary cavity, about 1 to 2 min before its concretion, try to implant the prosthesis along in the middle position, hammer to implant it with low strength when necessary. Long specialized reamer was used in control group, and biological type lengthened handle was selected in this group for implantation. Take proximal femoral prosthesis as a support for broken bone block reduction, use steel wire for fixation to re-organize stable femoral calcar and greater trochanter, for the osteoporosis patients, the steel wire could also be used directly to suture the fracture block of greater trochanter. For the missing bone lump and spaces around femoral neck, cancellous bone inside femoral head could be pressed and used for filling. After the bone cement became solidified, install the head and neck of test mould, and reset; after testing the degree of tightness and equal limb length, implant the prosthesis for reduction. Operation time, bleeding volume during operation, postoperative blood loss, the total operative blood loss and ambulation time between the two groups were compared.

During follow-ups, Harris score, VAS and X-ray examinations were collected in all patients. Harris score of hip joint function before the surgery, 1, 3, 6 months and 1 year after the surgery, and VAS for grading hip pain were introduced. Also, the X-ray film could be used to observe whether the prosthesis shifted, the contact condition of prosthesis and femur; and the Engh standard [5] could be used to judge biomechanical stability of the prosthesis, which were divided into bone ingrowth stability, fiber ingrowth stability and instability (loose).

Table 1. Harris score before surgery, at 1, 3 and 6 months after surgery between two groups.

All patients in observation group have received the follow-up for 6 to 34 months after the surgery, with an average time of 24 months. At 1 year after the surgery, the function of hip joint had greatly improved in all patients. According to the latest follow-up (more than 1 year after the surgery), new bone growth was observed between the femoral prosthesis and endosteum, and there were no resorption (osteolysis) and formation of radiolucent line. According to Engh standard, all patients had received bony fixation. There were no neurovascular injury, infection, fracture, loosening or dislocation of prosthesis, pain in non-femoral region and host reactions of the transplantation occurred in any patients. After discharge, 3 cases of patients died of cardio-pulmonary failure, 1 case died of stroke, 1 case died of other internal medical disease (with unknown death cause). The prosthesis was shown in Figures 1A and 1B, effect drawing of the operation was shown in Figure 1C, and typical case was shown in Figure 2. 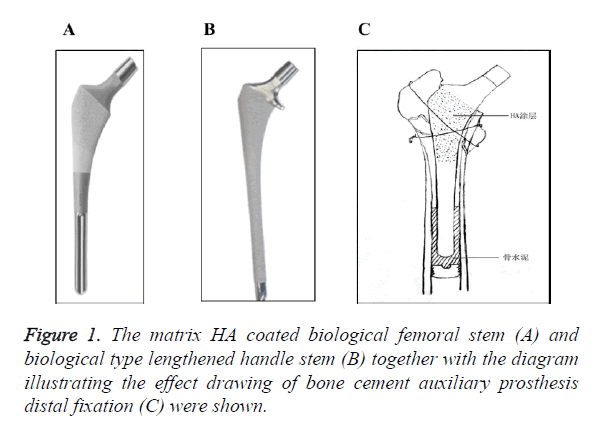 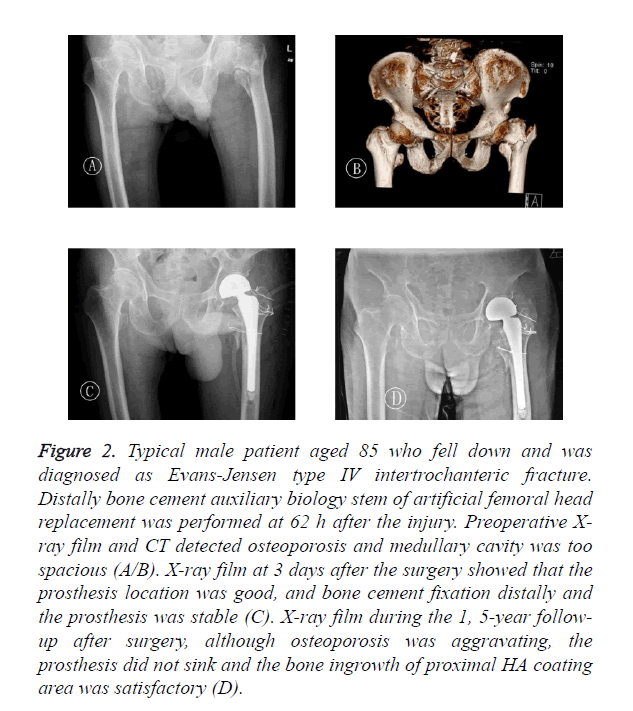 Figure 2. Typical male patient aged 85 who fell down and was diagnosed as Evans-Jensen type IV intertrochanteric fracture. Distally bone cement auxiliary biology stem of artificial femoral head replacement was performed at 62 h after the injury. Preoperative X-ray film and CT detected osteoporosis and medullary cavity was too spacious (A/B). X-ray film at 3 days after the surgery showed that the prosthesis location was good, and bone cement fixation distally and the prosthesis was stable (C). X-ray film during the 1, 5-year followup after surgery, although osteoporosis was aggravating, the prosthesis did not sink and the bone ingrowth of proximal HA coating area was satisfactory (D).

The comparison of operation time between two groups has no statistical significance (P>0.05); for the amount of bleeding during operation, postoperative blood loss and the total operative blood loss, the amount of observation group is significantly less than that of the control group, the differences are statistically significant (P<0.05); for the ambulation time, the time of observation group was significantly shorter than that of the control group, the difference has statistical significance (P<0.05) (Table 2). In observation group, there were no patients with toxic reaction, sudden drop of blood pressure, nausea, discomfort and other manifestations during treatment. And during the hospitalization period, there were no infection, bedsore, deep venous thrombosis, fat embolism and other complications in the two groups of patients.

The incidence of hip fracture has increased year by year. According to the report of Miyamoto RG et al. there were about 1.7 million suffering from hip fracture in the globe range, and the mortality rate was ranging from 14% to 36% per year [6]. For that the conservative treatment usually takes longer time and brought several complications, the life quality of patients is very poor and surgical treatment becomes the first choice for the patients [1-4]. Due to some causes like osteoporosis, poor internal fixation or unstable fracture, using internal fixation would cause fracture nonunion or malunion, lag screw cut out femoral head, ischemic necrosis of the femoral head, traumatic arthritis, etc. [7]. Most scholars suggest adopting internal fixation for young patients with good bone condition and stable fracture, while using joint replacement for elderly patients with osteoporosis and unstable fracture [1,2], considering that the treatment of joint replacement would restore the limb length quickly, provide good stability immediately, help patients get out of bed in early period after surgery and reduce the complications in peri-operative period [8].

There are still some disadvantages of ordinary femoral stem prosthesis. 1. For bone cement prosthesis, since the bone cement could penetrate the broken ends at the fractured ends, it could directly prevent fracture healing. Hardy et al. [1] reported that bone cement with polymerization heat was sufficient to inactivate mesenchymal stem cells so as to affect the fracture healing, which went against the mid and long-term stability; Zhang et al. [12] pointed that the incidence rate of bone cement prosthesis complications was up to 47%, the toxicity of bone cement increased the risk of cardiopulmonary and vascular complication, while enhancing perfusion increased the risk of fat embolism. 2. Biological type femoral prosthesis stem avoided the toxin effect, however, the current design of biological prosthesis stem could not meet the various shapes of medullary cavities, especially for the unusual spacious femoral medullary cavity due to osteoporosis, that usually its near-end expanded to the thinner cortex while its distal end still kept unstable.

Currently, choosing biological type lengthened handle for treating elderly intertrochanteric fracture patients is relatively common [13,14], for relying on the lengthened handle could increase the contact area; however, since the elderly patients usually suffered osteoporosis and had spacious medullary cavities, their proximal femoral fractures were unstable and lacked rotary control, the rotation of the prosthesis inside medullary cavity was not stable; therefore, many osteoporosis patients still could not receive initial stability, this treatment could easily cause anteversion angle disappearing after reduction, joint dislocation and loosening, and postoperative pain, which seriously influenced the curative effect. Aiming to the above problems, we designed and used the distal bone cement auxiliary biology stem for fixation, used wire binding for fracture reduction combined femoral stem biological fixation at the near end, as the treatment for unstable intertrochanteric fracture in elderly patients.

The prosthesis was matrix HA coated biological femoral stem with almost 1/3 coating, the distal end of the prosthesis was smooth (Figure 1). Use bone cement at the distal end of femoral stem to form an about 3-4 cm fixed cement column after implantation, which could receive the immediate effect of rigid fixation, and solve the unstable problem when turning inward and outward, and rotating. On the on hand, it could reduce the systemic reaction upon bone cement prosthesis, and had little interference for elderly intertrochanteric fracture patients with poor compensation ability; on the other hand, it did not require over-sized prosthesis for stability. Fixing the fracture block of proximal greater trochanter and lesser trochanter around the femoral stem for reduction, is good for keeping proximal bone mass, and has less invading towards the proximal femoral trochanteric bones, the stability of prosthesis is good for healing of intertrochanteric fracture. The good stability of prosthesis helps patients for their early ambulation, reduced the occurrence of complications during peri-operative period, and it is also good for biological prosthesis bone ingrowth, thus to improve the curative effect. Wang et al. [15] reported that biological lengthened handle would increase trauma as well as the amount of bleeding during operation, and prolong the ambulation time. In this study, the amount of bleeding during operation, postoperative blood loss and the total operative blood loss of observation group was significantly less than that of the control group, the differences were statistically significant (P<0.05). For patients with serious osteoporosis, thinner cortex and spacious medullary cavity, we think, it is difficult for biological type lengthened handle to receive rotational stability, while using distal bone cement auxiliary ordinary biology stem for fixation has significant advantage.