Present investigation evaluates the neuroprotective effect of Aster tataricus (AT) in PTZ induced epileptic rats and thereby improves the cognitive functions. Epilepsy was induced by ip injection of Pentylenetetrazol (PTZ) for the duration of 36 days. All the rats were pretreated with AT (100 and 200 mg/kg, p.o.) for 24 days and thereafter injections of PTZ was started to till the end of protocol. Effect of AT on epileptic behavior was estimated by observing the frequency and stage of seizer and cognitive function by Morris Water Maze (MWM). Effect of AT on oxidative stress, cytokines and level of neurochemicals such as dopamine and 5 hydroxy tryptamine (5HT) in the brain tissues were estimated at the end of protocol. Moreover histopathology study was done for the estimation of surviving neurons. There were significant (p<0.01) decrease in the frequency and stage of epilepsy and improves the cognitive function in AT treated rats compared to PTZ induced epileptic rats. It was also observed that treatment with AT significantly increases the dopamine and 5HT level and decreases the oxidative stress and cytokine in the brain tissues of PTZ induced epileptic rats compared to negative control group. Moreover the histopathology study suggested that AT restores the cellular structure and improves number of surviving cells. Thus present study concludes the neuroprotective effect of Aster tataricus in chronic epilepsy and thereby restores the cognitive functions.

Epilepsy is a neuronal disorder in which activity of brain cells get altered [1]. Characteristic symptoms of epilepsy are sudden start of convulsion or loss of consciousness for short period of time, over excitement of sensory nerves [2]. Epidemological study suggested the prevalence of epilepsy higher in developing countries compared to develop. Epileptic seizure generally occurred due to imbalance between excitatory and inhibitory neurotransmitter in the brain such as Gama- Aminobutyric Acid (GABA), dopamine, serotonin and noradrenaline. In chronic epileptic seizures, excitotoxicity damages the neuronal cells [3].

Reported study on status of epilepsy suggested that alteration in serotonin and dopamine level have a role in the pathology of seizure. Literature also suggested that alteration in the release of glutamate neurotransmitter results in neuronal cell death due to induction of apoptosis which is controlled by dopamine [4]. Whereas, dopamine agonists are the drug used in the management of epilepsy and neuronal damage in Parkinson’s disease and schizophrenia [5]. Presently available management options of epilepsy contain synthetic molecules that treat the disease symptomatically. Moreover patients of epilepsy are suffering from cognitive dysfunction due to epileptogenic process and treatment with antiepileptic drugs. Thus in the recent time for the treatment of epilepsy more research is going on medicinal plants.

Aster tataricus (AT) is used traditionally in China for medicinal purpose last from 2000 years. There are several chemical constituents present in the roots of AT like triterpenes and saponins [6]. Other reported chemicals that are isolated from roots such as epifriedelinol, caffeoylquinic acids, astersaponins, shionone and aster peptides [7]. Traditionally it has been used as antibacterial, antifungal, anticancer and management of chronic bronchitis and tuberculosis [8]. Literature suggested that root extract of AS possess antiinflammatory, expectorant and antitussive activity [7]. Caffeoylquinic acids and epifriedelinol possess strong antioxidant, anti-inflammatory and anticancer activity [9-11].

Healthy male wistar rats (200-250 g) were procured from Experimental Animal Center of Zhengjiang Province, China. All the rats were kept under controlled condition as per the guidelines with pallet feed and water ad libitum. Investigation protocols of the present study approved by Institutional ethical committee.

Roots of Aster tataricus were procured from local supplier and authentified from Institute of Medicinal Plant Development, Beijing. Ethanolic extraction of Aster tataricus roots was done by maceration. Dried roots were powdered and kept it with 70% ethanol for 72 hrs. Thereafter from the extract ethanol was evaporated at low temperature by rota vapor apparatus. The dried extract was stored in a desiccators and 7.1% w/w yield was obtained.

Acute toxicity for ethanolic root extract of Aster tataricus was performed as per the OECD guideline (423). In this study overnight fasted male wistar rats were used for the dosing of AT. Lethal dose of AT was estimated and 1/10th and 1/20th of LD50 considered as effective dose.

All the rats of wistar strain were divided into four different groups as per the treatment protocol: 1) Control (n=8) receives saline for 60 day; 2) Negative control group (n=8) received vehicle (saline) for the period of 24 days and thereafter treated with PTZ (35 mg/kg, ip) for 36 days. 3rd and 4th group, PTZ+ AT (n=8) treated groups which received AT (100 and 200 mg/kg, ip) for first 24 days thereafter AT given 30 min prior to PTZ (35 mg/kg, ip) for the duration of 36 days. During the protocol period stages of seizer and spontaneous recurrent seizers were estimated in the rats. Cognitive functions in epileptic rats were determined by Morris water maze and sacrificed after this test. Thereafter brain was isolated from drug treated rats for the estimation of different biochemical parameters such as oxidative stress, ROS generation, cytokines and neurochemicals (serotonin and dopamine). Histopathology study was also done on brain tissues by using Nissl staining.

Racine scale was used for the assessment of stage of seizure. Animals were observed for epilepsy behavior for 60 min after the drug administration. Epilepsy was characterized as stages such as stage 0: Absence of response, stage 1: Hyperactivity and twitching, stage 2: Myoclonic jerking and head nodding, stage 3: Unilateral forelimb clonus, stage 4: Bilateral clonus with rearing, stage 5: Clonic tonic seizure and absence of writhing reflex [12].

Cognitive functions in all the animals were estimated by using MWM which contain a tank having the 180 cm diameter and 170 cm height in dimension. Tank was divided in to four different quadrants with suitable labeling and a platform was placed under the water 2 cm below the level of water. All the rats were trained for five day in two session of an interval of 2 hr. Rat was placed in a quadrant and allowed to search the stage in each trial. All the trained rats were investigated after removing the stage from the quadrant for duration of time spent in the same quadrant [13].

All the rats were sacrificed at the end of protocol. Thereafter isolated brain was washed with normal saline solution thoroughly and brain was divided into two halves. Brains one half was homogenized with a solution that contains 50 mM Tris- Hcl of pH 7.4 and 300 mM of sucrose. The brain homogenate was centrifuged at 10,000 xg for 10 min and obtained supernant solution was used for biochemical estimation. Second half of brain was utilized for histopathological examination.

Effect of AT on Dopamine and Serotonin level in rats brain

Brain extract of rats was added to same amount of isobutane and buffer of pH 10. To this mixture 10% of heptanes was added and 5 ml of 0.1 N Hcl was added to it with vigorous shaking. This solution was centrifuged and separated the organic mixture. Estimation of dopamine and 5HT was done in aqueous phase of separated solution. Concentration of dopamine was estimated by mixing 0.4 M EDTA and buffer of 6.9 pH at 0.02 ml and 0.05 ml respectively in 0.02 ml of aqueous phase. 0.1 M iodine solution was added to the reaction mixture for oxidation. Acetic acid was thoroughly mixed in reaction solution and heated upto 100°C for 6 min. Dopamine level was estimated by observing the spectra at 330 and 375 nm as the excitation and emission wavelength. 5HT concentration was estimated by adding O-pthaldialdehyde (0.025 ml) to aqueous solution and heated upto 100°C for 10 min. Spectra was taken at 360 and 470 nm for excitation and emission wavelength respectively for the estimation of 5HT [14].

Effect of AT on stress makers

Superoxide Dismutase (SOD), Level of lipid peroxidation (LPO) and catalase (CAT) were estimated in the brain tissue of rats by using riboflavin sensitized method, Ohkawa and ability of catalase to oxidize H2O2 respectively [15-17].

Effect of AT on cytokines

Cytokines such as IL-10 and TNF-α level in the brain tissue was determined by using was specific enzyme-linked immunosorbent assay (ELISA) kits [18].

Effect of AT on histopathology of brain

Isolated brain of rats was imbedded into formalin (3%) for 24 hr and by using alcohol tissue was dehydrated. These tissue sections were poured into paraffin and by using microtome 5 μm thick sections of brain were sliced. Nissl staining in 1% thionin was used for the staining the slices. Neuronal cells were counted by using by using light microscope (400x) [19].

All the values of these experiments were articulated as mean ± SD and the data was statistically analyzed by one-way ANOVA and thereafter applied to Dunnett post hoc test. p<0.05 was considered significant statistically.

Effect of AT on epileptic behaviour

Effect of AT on the epileptic behavior was estimated in PTZ induced epileptic rat as shown in Figure 1. There were significant (p<0.01) decreases in the frequency of seizer in AT treated rats compared to negative control group of rats. This decrease in frequency of seizer was found to be in a dose dependent manner (Figure 1a). Moreover the stage of epilepsy was estimated in AT treated PTZ induced epileptic rats. It was observed that treatment with AT delays the increased stage of seizer (Figure 1b). 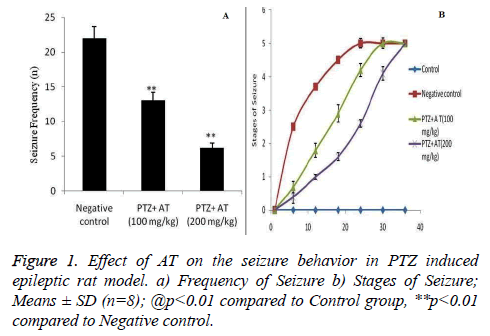 Effect of AT on cognitive function

Cognitive function was estimated by using MWM. Figure 2 shows the effect of AT on the cognitive function in PTZ induced epileptic rats. Escape latency was significantly decreases compared to negative control group. Even time spent in the target quadrants was found to be significantly increases in AT treated group compared to PTZ induced epileptic rats. 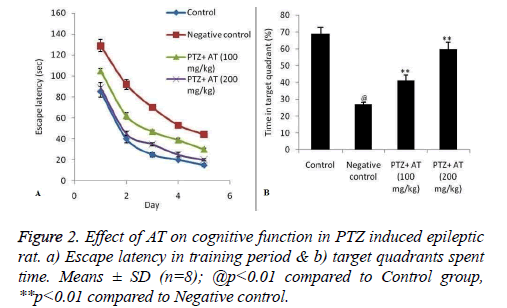 Effect of AT on dopamine and serotonin level in rat brain

Table 1. Effect of AT on the Dopamine and 5 HT in the brain tissues of PTZ induced epileptic rats.

Effect of AT on stress markers

Table 2. Effect of AT on SOD, LPO & CAT in the brain tissue of PTZ induced epileptic rats.

Effect of AT on cytokines 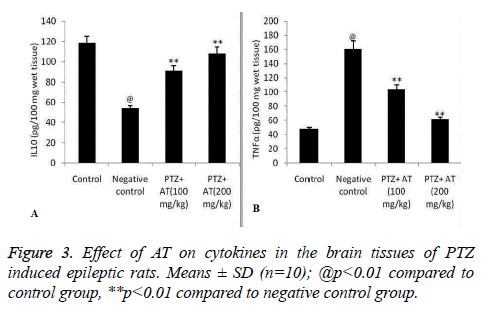 Effect of AT on pathophysiology of neuronal cell

Neurons of the control group of rats shows the regular cellular bodies after Nissl staining and in the TS of brain of negative control group shows the abnormality in the morphology of neuronal cell, in which nuclei get disturbed. Moreover number of neurons was found to be decreased in PTZ induced epileptic rats compared to control group. It was observed that treatment with AT significantly increases the number of cells in CA1 compared to negative control group. Even the morphological abnormality was found to be get reverse after AT treatment in PTZ induced epileptic rats as shown in Figures 4 and 5. 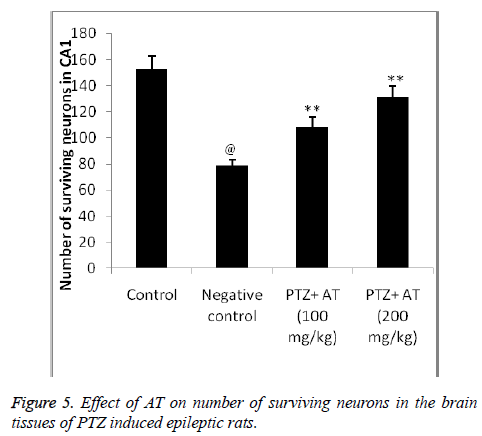 Figure 5. Effect of AT on number of surviving neurons in the brain tissues of PTZ induced epileptic rats.

This study deals with the neuroprotective effect of Aster tataricus in epilecptic rat and thereby recovers the cognitive function in epileptic rats. Neuroprotective effect of Aster tataricus was done by estimating neurochemicals concentration (dopamine & 5HT), oxidative stress parameters and cytokines in the brain tissues of epileptic rat. Moreover number of surviving neurons also estimated by histopathology study. Epilepsy is a neuronal disorder characterized by seizer [1]. It was observed that the drug lowers the frequency of seizer and reduces the stage of seizer effectively manages the chronic epilepsy [20]. In the present investigation treatment with AT was significantly decreases (p<0.01) the frequency and stages of seizer and thereby recovers the cognitive function in PTZ induced epileptic rats. Reported study suggested that imbalance of neurochemicals such as dopamine, GABA, 5HT and glutamate in the brain results in epilepsy. This imbalance increases the oxidative stress, inflammation and altered cellular ion in the brain of epileptic patient [21,22]. All these changes develop a progressive neuronal damage and altered cognitive functions.