Objective: To investigate the relationship between the expression of PTEN and Cyclin D1 in pituitary tumors and the proliferation and apoptosis of pituitary tumor cells.

Methods: The pGPU6-GFP-Neo-PTEN/Cyclin D1 vector was constructed with pGPU6-GFP-Neo as the vector, and the low expression of PTEN and high expression of Cyclin D1 were established. MTT assay and soft agar colony formation assay were used to detect the growth curve change and clonogenic ability. Western blot was used to detect inhibition of PTEN and Cyclin D1 and its relationship with Cyclin D1, CDK4, CDK2 and Cyclin E expression.

Pituitary tumor, as one of the most common malignant tumors of endocrine system [1], has a very high mortality rate [2]. At present, surgery and chemotherapy are main treatment for pituitary adenoma [3]. Although more than 80% of the patients have benefited from first-line chemotherapy, serious problems like high recurrence rate and low survival rate remain to be solved [4]. The study found that the occurrence and development of pituitary adenoma is a complex process of various factors interaction and is highly correlated with multigene family abnormity [5-8]. This suggests that the determination of molecular targets will be a research topic and it will help to understand the development process of pituitary adenoma.

As a kind of newly discovered tumor suppressor genes, PTEN belongs to the gene family of protein tyrosine phosphatases. Cyclin D1 is the protein encoded by human CCND1 gene. As a kind of traditional proto-oncogenes, excessive expression of Cyclin D1 would leave cell proliferation out of control. However, Cyclin D1’s mechanism of action remains different in development process of different malignant tumors. For example, it resists apoptotic and promote proliferation in ovarian and large B cell lymphoma [9] while inhibits tumor cell proliferation in renal cell carcinoma and esophageal cancer [10]. This study aims to analyse the expression of PTEN and Cyclin D1 in pituitary tumor, the mechanism of action of pituitary adenoma and its relationship with the occurrence of pituitary adenoma.

Human pituitary adenoma cell GH3 remains a single cell suspension in logarithmic phase digestive centrifugal suspension. Vaccinate 5 × 103 cells/well to 96-well plate. Put it in incubator with 5% CO2 at the temperature of 37°C for overnight. Next day, to draw the culture medium in the holes and add 200μL serum free medium with the infection of certain adenovirus. After continuing a routine culture for 72 h, add 20 μL MTT (5 mg/mL) to every hole and continue the routine culture for 4 h, then blot supernatant and add 150 μL DMSO solution, avoid light and shock for 10 minutes. Detect absorbance value in microplate reader.

Human pituitary adenoma cell GH3 remains a single cell suspension in logarithmic phase digestive centrifugal suspension. Vaccinate 1 × 103 cells/holes to orifice plate of 6- well. Put it in incubator with 5% CO2 at the temperature of 37°C for the night. Perform medium exchange once every three days. Blot the culture medium in the holes and dye the solution with crystal violet for 5 min after 15 min of 4% paraformaldehyde fixation of cells. Photograph with the digital camera and quantify cell cloning with the adoption of quantity one.

Make the statistical analysis of data through IBM SPSS 17.0 software with the test of measurement data marked by mean ± standard deviation and counting data χ2. Mean comparison among groups uses “t” test, conduct correlation analysis by means of the Spearman rank sum and perform multiple factors analysis with the method of logistic regression. P<0.05 represents the difference is statistically significant. 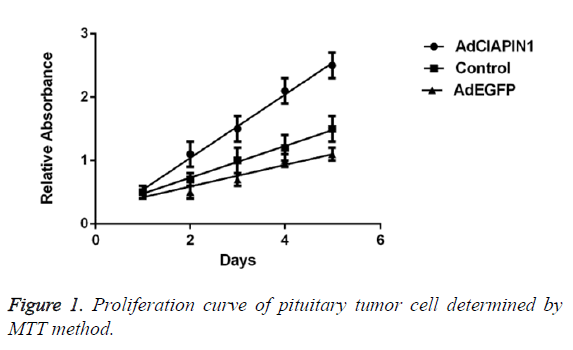 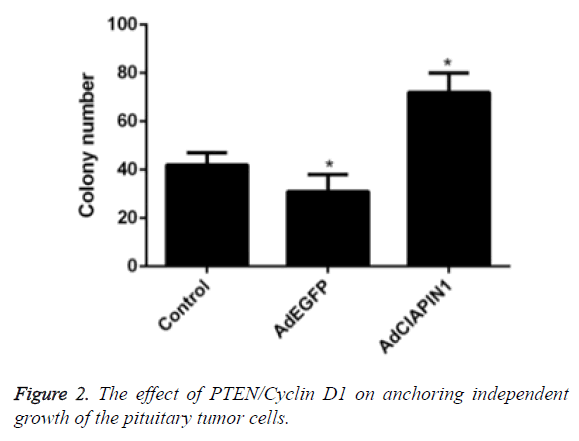 Figure 2. The effect of PTEN/Cyclin D1 on anchoring independent growth of the pituitary tumor cells. 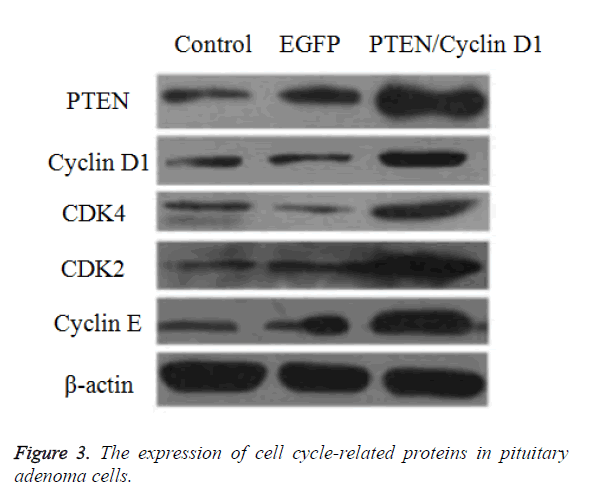 Pituitary adenoma becomes one of the most common malignant tumors in clinical endocrine system and is difficult to diagnose at the onset. The illness has often reached an advanced stage once diagnosed clinically and pathologically [11,12]. At present, the standard treatment of pituitary adenoma mainly is the ideal combination of cyto-reductive surgery with therapy of radiation and chemotherapy [13,14]. After years of exploration, the advanced microsurgical technique can maximize the removal of the tumor tissue, but the 5 y survival rate of pituitary adenoma patients remains only about 15% [15,16]. Patients after chemotherapy ends would frequently encounter chemotherapy failure caused by drug resistance and the other part of patients cannot bear the lethal effect of chemotherapy drugs. The tumor cells are killed together with non-tumor cells. Thus, to explore the occurrence mechanism of pituitary adenoma becomes the new hot spot [17].

The results showed that PTEN/Cyclin D1 can promote pituitary tumor cell growth and proliferation under the main mechanism of the up-regulation of the cell cycle related proteins like CDK4, CDK2, and Cyclin E. As a newly discovered tumor suppressor gene, PTEN is different from the traditional apoptosis regulating molecule Bcl-2 family and Caspase family. It exists in the Ras signaling pathways as a key molecule. The expression of PTEN completely depends on the stimulation of growth factors like IL-3, stem cell factors, and TPO. From the point of view of biology, however, it performs specific function mainly through the interaction of protein molecules and involvement in signaling pathways. The results show that PTEN can promote pituitary tumor cell proliferation. Cyclin D1 is the protein encoded by human CCND1 gene (specific cyclin-D1). As a kind of traditional proto-oncogenes, the excessive expression of Cyclin D1 can turn the cells to malignant tumor with the cell proliferation out of control. As the regulatory proteins in G1/S phase of cell cycle, CDK4, CDK2 and Cyclin E play an important role in split and copy of both normal cells and malignant tumor cells [18]. The upregulation of CDK4, CDK2 and Cyclin E promotes cell proliferation and advances the cell replication in G1 phase and mitosis in S phase while the down-regulation inhibits the cell proliferation, inducing a cell cycle arrest in G1 phase and damaging the reproduction capacity of cells. The experiment results show that the up-regulation of PTEN/Cyclin D1 can increase the expression of cell cycle- related protein molecules like CDK2, CDK4, and Cyclin E. This is consistent with other studies result that Cyclin D1 is a kind of important key molecules in cell cycle activity [19]. PTEN enables to make negative regulation on the expression of p38MAPK while p38MAPK promotes the cell proliferation through the negative regulation of CyclinD1molecules. In addition, Cyclin D1 can also activate the transcription factors NF-κB, also prompting the Cyclin D1 promotes pituitary tumor cell proliferation and showing that PTEN/Cyclin D1 molecules’ role in promoting the proliferation process of pituitary tumor cells with its main influence in the level of gene transcription.

The experiment verifies that PTEN/Cyclin D1 continues showing its function of promoting the tumor cell proliferation in vitro experiment of pituitary adenoma and comes into play through the expression of cell cycle-related protein molecules like CDK2, CDK4, and Cyclin E.