Introduction: Radix Astragali (RA) has been used for herbal formulations in the treatment of bone degradation in traditional Chinese medicine.

Results: Op group showed a significant decrease in bone mineral density and biomechanical properties versus control group. While RA extract could significantly reverse this bone degeneration trend, and the effects of high dose was better than low dose, which means such effects maybe dose dependent.

Conclusion: We conclude that RA decoction was able to initiate a positive effect on bone disorder after spinal cord injury, and RA is a hopefully source of new drugs for osteoporosis.

Less than 1% people who suffered significant injury of spinal cord could fully recover, and such injuries would result in partial or complete paralysis [1-3]. The number of people who currently living with spinal cord injury (SCI) in China is estimated to be about 953,000 with 41,000 new cases occurring each year [4]. SCI is responsible for several physiological modifications, including a great decline in bone mineral density (BMD) and an increased risk of fractures [4-6], individuals with functionally-complete SCI have a 20- to 100- fold greater fracture risk than age-matched ambulatory individuals [7], with nearly 50% of those with SCI experiencing one or more low-trauma fractures at some point following injury [8].

Currently, there is a critical need to develop technologies to treat bone loss after SCI. Functional exercise and pharmacological intervention are two major methods to prevent the progress of osteoporosis. Pharmacologic intervention on osteoporosis after SCI includes intake of calcium, phosphate, vitamin D, calcitonin and biphosphonates. To some extent, supplementation of calcium and vitamin D may contribute to calcium homeostasis, but can’t prevent osteoporosis after SCI [9,10]. Similarly, phosphate supplementation can reduce urinary calcium excretion, but does not prevent bone loss after SCI [11]. Tiludronate, pamidronate [12], alendronate and some other drugs were reported to have beneficial effects on osteoporosis after SCI. However, most of such pharmacological treatments didn’t show long-term effects in clinical practice [13].

The puzzle made us to look for other ways and traditional Chinese medicine (TCM) naturally become the alternative with the long history in China. TCM is a systemic and complex science based on a theory different from western medicine. Though the mechanisms of most TCM are unclear, herbal medicines have been used for about two thousand years with apparent efficacy in treating and alleviating various complicated diseases in Asia, including China, Korea and Japan. In fact, there are a few famous and well used herbal formulations in the treatment of bone degradation, such as Danggui Buxue Tang [14], Bushen Huayu Tang, Xianling Gubao capsule [15], Longmu Zhuanggu Granule, etc. Radix Astragali (RA) is one of the herbals constituting Danggui Buxue Tang, Bushen Huayu Tang, Longmu Zhuanggu Granule, and this encouraged us to study the effects of RA alone on bone loss.

Forty male Wistar rats (aged 8 weeks and weighing 260-280 g) were used in this study. The rats were maintained under controlled temperature (22-28°C), light–dark periods of 12 h, and with free access to water and a commercial diet. All animal-handling and surgical procedures were strictly conducted according to the Guiding Principles for the Care and Use of Laboratory Animals. This study was approved by the Institute of Orthopedics and Traumatology of Chinese PLA hospital Animal Care and Use Committee guidelines (number 20110289).

Rats were anesthetized with an intraperitoneal injection of ketamine (90 mg/kg) and xylazine (10 mg/kg), and a laminectomy was performed at Th9-10. In injured rats, the dura mater was exposed, and the spinal cord was completely sectioned with microscissors. In sham-operated animals, the same laminectomy was performed without spinal cord section. During the surgical procedure, body temperature was kept at 37°C to 38°C. After surgery, cefazolin (25 mg/kg; Bristol- Myers Squibb, New York, NY, USA) was subcutaneously administered for 7 consecutive days to all groups to reduce the possibility of bacterial infections. Bladders were manually emptied 3 times daily until sufficient bladder-emptying function returned (about 7 to 10 days after surgery).

Hindlimb movement of the rats was assessed using the Basso- Beattie-Bresnahan locomotor (BBB) rating scale as reported previously [16]. Briefly, the score range from 0 to 21, each number has a description of movement improvement. All rats were previously tested (each one reflected a score of 21). After surgery, all rats were tested one time per week. Two investigators observed the rats for 4 minutes without knowing which treatment was administered (double blinded), and assigned a score depending on the movement of the rat hindlimbs.

The rats were sacrificed by cervical dislocation. Tibiae and femur were collected with soft tissues removed and immersed in normal saline, kept at -20.

The tibiae were thawed at room temperature overnight before analysis. The specimens were kept in saline to prevent dehydration throughout the evaluation period. Biomechanical properties of the right tibia were determined by a 3-point bending test in Instron Universal Testing Machine (San Francisco, CA, 4444 model, 1 KN load cell). Tibiae were placed on a 3.8 cm long/metal device, which provides a 1.8 cm distant double support on the bone diaphysis. The load cell was perpendicularly positioned at the middle point of the bone. A 5 N preload was applied to avoid specimen sliding. Finally, the bending force was applied at a constant deformation rate of 0.5 cm/min until a fracture occurred. From the load-deformation curve, the maximum load at failure (N), structural stiffness (N/ mm), and energy absorption (J) were obtained.

Data were presented as the mean ± SD (n=10). Comparisons among the groups were made using one-way analysis of variance (ANOVA) with SPASS 17.0 and p<0.05 was considered statistically significant.

The lesion procedure caused severe degradation in behavioral performance, as measured by the BBB rating scale. Rats with spinal cord sectioned showed no plantar placement of the paw with weight support, and the BBB scores were below 7 after the surgery, which means paraplegia was successfully constructed. During the experimental period, spinal cord sectioned rats did not show any recovery in their general motor behavior. Though BBB scores were a little bit higher in L group and H group than Op group, this change was not statistically significant.

The BMD level of all groups was shown in Figure 1. From the data, we can see that BMD index of Op group was significantly lower than control group, and T<2.5SD (analyzed by software special for small animal. Data didn’t show in the figure), which means osteoporosis happened in femur 6 weeks after spinal cord section. BMD index of H group was significantly higher than Op group, while BMD index of L group was higher than Op group, but without statistical significance, which suggesting that RA extract could reverse bone loss after SCI with a dose dependent manner. 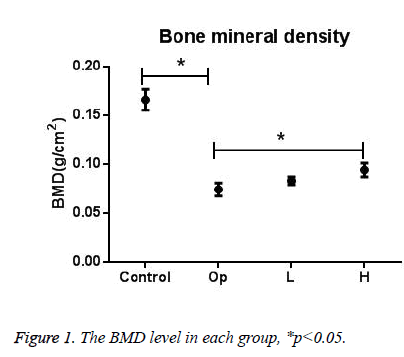 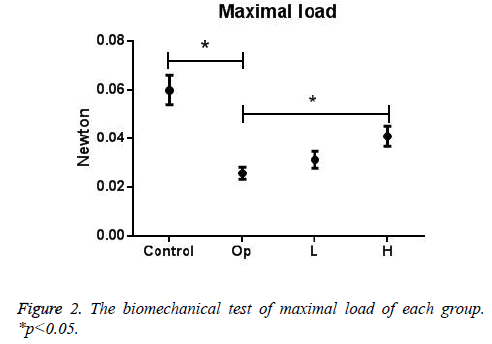 Figure 2: The biomechanical test of maximal load of each group. *p<0.05. 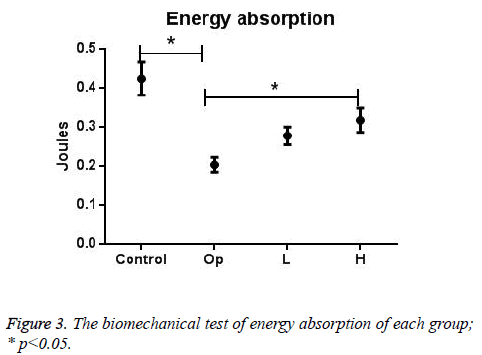 Figure 3: The biomechanical test of energy absorption of each group; * p<0.05. 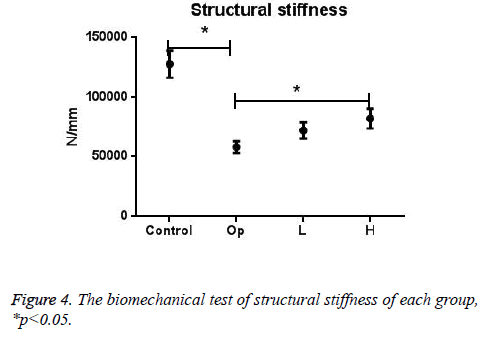 Figure 4: The biomechanical test of structural stiffness of each group, *p<0.05.

SCI model was obtained by spinal cord section, and to evaluate the model, firstly, BBB rating scale was used to evaluate spinal cord injury, and results showed paraplegia was done. Secondly, BMD were detected to evaluate the bone loss. Normally, BMD<2.5SD was considered osteoporosis happened. Thirdly, to better understand the bone loss condition and evaluate the effects of RA on bone degradation, biomechanical test with tibiae (including maximal load, energy absorption, and structural stiffness test) was acquired besides BMD. The maximum load (N), structural stiffness (N/mm), and energy absorption (J) are widely used in the measurement of bone mechanical strength, especially in several bone disorders [17]. Results in the present study showed a significant decrease in BMD and biomechanical properties in spinal cord injured rats, which are in accordance with other publications. In TCM, herbs that tonify the kidney and stimulate blood circulation are greatly used in the treatment of fracture, arthritis, osteoporosis, etc. RA is an extensively used herbal in TCM. RA is widely used for its liver protective, immunoenhancing, antiinflammatory, antiperspirant, antidiuretic, and antidiabetic properties and as a tonic drug. RA is one of the herbals of Danggui Buxue Tang and Bushen Huayu Tang, which both has been verified could alleviate osteoporosis.

Danggui Buxue Tang (DBT), a Chinese herbal decoction consisting of RA and Radix Angelicae Sinensis with a weight ratio of 5:1, is widely used for menopausal women to nourish and stimulate blood circulation. DBT was proved could significantly increase the number of osteoblasts, intracellular ALP levels, and nodule numbers, while inhibit osteoclast activity. Additionally, DBT could stimulate the proliferation and differentiation of osteoblast by stimulating the downstream signaling of p-ERK and p-JNK [18]. Besides, DBT was verified exhibiting significant estrogenic properties both in vitro and in vivo. The application of DBT did not alter the weight of uterus and liver, as well as the estrogen receptors α and β. However, DBT stimulated the transcript expression of the estrogen responsive genes. In addition, the inductive role of DBT on the expression of members of the aryl hydrocarbon receptor family in uterus and liver of ovariectomized rats was confirmed [19]. It is well know that the deficiency of ovarian hormones, especially estrogens, is the main reason of postmenopausal osteoporosis. No wonder DBT could antagonize menopausal syndrome. And the efficacy of DBT is greater than RA or RAS used alone, which means there are synergistic effects when RA and RAS used together [20].

Though RA is the main part of DBT, there is a deficiency of studies on the efficacy of RA alone on osteoporosis. We hope the present study could be an impactful complement. Beyond that, to adapt to the modernization of herbal medicine, studies on active components and mechanisms are very important. Commonly, there are various components in one herbal medicine. When speaking of RA, active components including astragalosides, isoflavonoids, isoflavones, isoflavan, and pterocarpan glycosides, among which astragaloside IV has been proved having osteogenetic effects. Astragaloside IV was proved could significantly induce osteogenesis related proteins and genes expression of preosteoblasts (OCT-1 cells) when cocultured in 3D-culture, including alkaline phosphatases (ALP), type I collagen (Col I), Osteocalcin (OC), and runt-related transcription factor-2 (Runx2) [21]. In summary, decrease in BMD and biomechanical properties were found in spinal cord sectioned rats, and water extract of RA could antagonize such degradations. From the positive effects of RA on bone degeneration in this study, RA is proved to be a potential source of new drugs for osteoporosis. The next step we should do is digging out the active components in RA extracts and the exactly mechanisms of RA on bone disorders. Although RA extract shows beneficial potential for osteoporosis, it is still a complementary and alternative medicine, it had better be used with other beneficial treatment.

We appreciate the funding from Construction of high level health technical personnel in Beijing health system, the funding number is 2014-3-093.