Aortoesophageal fistula caused by tumor recurrence after esophagectomy during chemoradiotherapy

Aortoesophageal Fistula (AEF) is an extremely rare complication after esophagectomy and it is lifethreatening. Here we present a patient who developed AEF due to chemoradiotherapy for tumor recurrence after esophagectomy. The management of an aorta fistula by deploying a stent graft into the aorta stopped the bleeding successfully. Unfortunately, the patient had symptoms and his general condition deteriorated postoperatively. Finally, the patient had multiple organ failure and died without any treatment. The cause of the complication is not clear, and may be due to radiation injury and tissue necrosis of the aortic wall. Endovascular therapy is a minimal invasive and effective option for AEF, but other symptoms of the patients should be taken care, especially after chemoradiotherapy.

Aortoesophageal Fistula (AEF) is a rare cause of bleeding after esophagectomy for cancer [1-3]. The fistula is probably caused by the development of a direct communication between the lumen of the aorta and gastrointestinal tract. In most cases of AEF, massive haemorrhage results in death and there are few therapeutic measures we can take. Inserting a stent graft into the aorta has been proved to be an effective method to control bleeding [4-6]. Here we present a case of AEF developed following esophagectomy due to ulcerative tumor of gastric remnant and chemoradiotherapy.

A 46 year-old man who had a complaint of dysphagia and pain for two months was admitted to our hospital. Gastroscopy revealed a 2 cm ulcer at 28 cm from the incisors and biopsy confirmed moderately differentiated squamous cell carcinoma. Computed tomography and upper gastrointestinal contrast confirmed the location and progression of the disease. The patient received radical surgery by thoracoscope combined with laparoscope oesophageal cancer resection and left cervical esophagogastrostomy. Intraoperatively, we observed the presence of oesophageal tumor which invaded the outer membrane of oesophagus. Pathological analysis revealed that the tumor had infiltration of outer membrane and metastatic lymph nodes were observed on oesophageal outer membrane. The malignancy was staged as pT3N1M0. Postoperative adjuvant chemoradiotherapy was implemented, including a total of 54 Gy in 27 fractions and four cycles of chemotherapy (docetaxel 120 mg, day 1/Nedaplatin 40 mg, days 1-3, DP chemotherapy regimens).

Thirteen months after the surgery, computed tomography of the chest revealed no evidence of tumor recurrence. Twenty-three months after the surgery, the patient was referred to our hospital with cough, expectoration and sour regurgitation. Enhanced computed tomography revealed a tumor around midthoracic aortic, suggesting the recurrence of the cancer (Figure 1). Gastroscopy revealed gastroesophageal anastomotic at 20 cm from the incisors and an ulcerated lesion of gastric remnant, covered with white moss and texture brittle and tagged with a metal clip on the edge of ulcer (Figure 2). Lesion biopsy confirmed squamous cell carcinoma (gastric remnant). 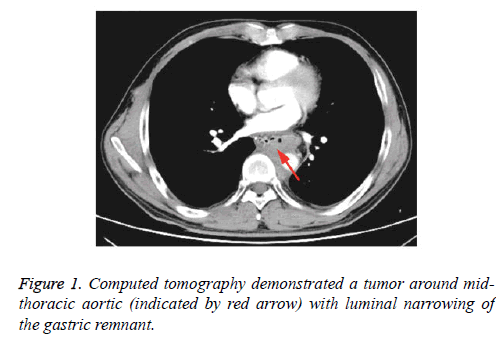 Figure 1: Computed tomography demonstrated a tumor around midthoracic aortic (indicated by red arrow) with luminal narrowing of the gastric remnant. 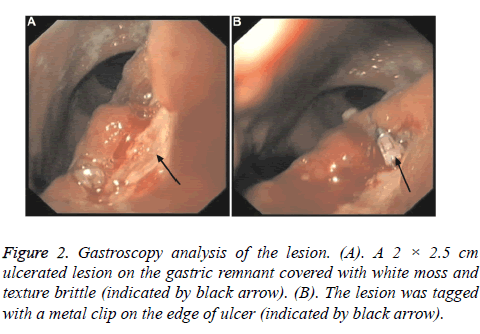 The patient received two cycles of DP chemotherapy regimens. In the meantime, he received a total of 56 Gy in 28 fractions. On the 28th day of the treatment, the patient was found to be tachycardic at 140 bpm and hypotensive at 11.5/7.6 kPa, with hematochezia and cold limbs. He began to vomit large volumes of bright red blood (about 800 ml), and then he was transferred to the Intensive Care Unit (ICU). Blood tests showed severe anaemia and blood coagulation dysfunction. Medical treatment was immediately started with Haemocoagulase Agkistrodon and the patient was stabilized through blood and plasma transfusions. Gastroscopy revealed bleeding from the ulcer of gastric remnant and the bleeding could not be stopped by gastroscopy. The hemodynamic condition gradually stabilized after fluid resuscitation. Subsequent angiogram revealed a crevasse of the descending aorta, confirming that the bleeding was due to the aortic fistula. Endovascular therapy was performed and a stent graft (ENTF2525C70EE, Medtronic vascular, Santa Rosa, CA, USA) was deployed in the descending aorta to successfully exclude the lesion (Figure 3). Postoperatively, the patient was comatose and haemorrhage was controlled. Anaemia was relieved through multiple transfusions, but blood tests revealed acute renal failure and blood coagulation dysfunction. The two complications were not largely improved after medical treatment. On postoperative day five, hepatic failure and Disseminated Intravascular Coagulation (DIC) occurred, and Continuous Renal Replacement Therapy (CRRT) and coagulation factors were applied. On postoperative day ten, the patient developed multiple organ failure and died without any treatment. 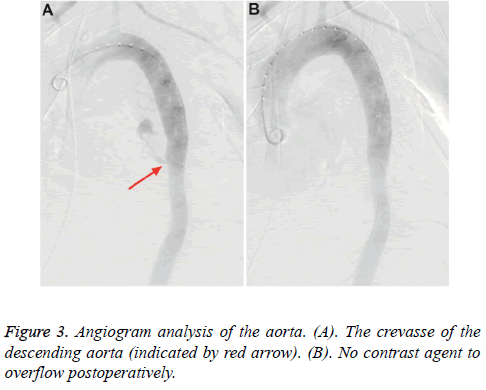 Figure 3: Angiogram analysis of the aorta. (A). The crevasse of the descending aorta (indicated by red arrow). (B). No contrast agent to overflow postoperatively.

AEF is a rare complication but is potentially lethal. It has been postulated that AEF is caused by following reasons: anastomotic leakage, digestive tract ulcers, tumor radiotherapy, and foreign body friction such as anastomotic nail. Symptoms of AEF vary widely from chest pain, dysphagia, tachycardia, melena to haemorrhage, and the most common symptoms include signal haemorrhage-asymptomatic period-massive haemorrhage and massive haemorrhage without prodrome [7]. However, very few AEF patients have all symptoms. The interval between signal haemorrhage and massive haemorrhage may vary from hours to days [8]. Our patient had immediate haemorrhage without chest pain and signal bleeding during the period of chemoradiotherapy. Diagnosis was based on both radiologic and endoscopic findings. Endoscopy not only helps the diagnosis but also help haemorrhagic control. The visualization of the fistula orifice by aortography and endoscopy further confirmed the diagnosis. Chest X-ray, computed tomography and upper gastrointestinal contrast are valuable additional approaches for the diagnosis.

In this case, endovascular therapy was successfully performed to close the fistula from the side of the aorta. Embolization of the fistula is an effective method of haemorrhagic control and endovascular therapy improves surgical repair for patients with hypovolemic shock. Despite the encouraging results of minimal invasive treatment, surgery remains the only chance of survival. The patient will suffer continued oesophageal soilage until the infected oesophagus is managed properly.

The concomitant use of chemotherapeutics with radiation therapy acted as a radio sensitizer and potentiated the radiation effect on the aortic wall, resulting in radiation injury and tissue necrosis of the aortic wall [9]. In this case, the ulcerative tumor of gastric remnant and chemoradiotherapy were the main reasons that caused AEF. We believe that chemoradiotherapy may facilitate the formation of fistula between the aorta and gastric remnant for the presence of an infiltrating and ulcerative tumor adjacent to the aorta [10]. Currently, most cancer patients after esophagectomy are treated with chemoradiotherapy, but the incidence of AEF remains extremely scarce. Therefore, when peptic ulcer and tumor invasion aorta appear simultaneously after esophagectomy, chemoradiotherapy must be cautiously conducted because it may lead to pathological changes between oesophageal gastric tissues and the aorta, promote fistula formation and increase the incidence of AEF. Despite all treatments we performed, the patient had poor prognosis due to the advanced tumor. It is important to make early diagnosis which could help develop individualized treatment plan according to the response of the tumor to chemoradiotherapy and general conditions of the patient.

In conclusion, endovascular therapy is a minimal invasive and effective option for patients with massive haemorrhage unfit for immediate surgery, but avoiding the formation of AEF is of great importance to the survival of the patients. Chemoradiotherapy should be cautiously implemented when digestive ulcer and tumor invasion aorta occur at the same time.