Performing double valve replacement in a patient with previous pneumonectomy was challenging. Here, we reported a double valve replacement, which is performed in a 60-year-old female with a history of left pneumonectomy via median sternotomy. Multiple cerebral infarctions were confirmed by cranial computed tomography after surgery with none sequela left, which was suspected causing by air embolism. We review literatures from PubMed and conclude that median sternotomy is still the most common surgical approach. Due to the adhesions induced by previous operation, intraoperative air excluding is important for cardiothoracic surgeons to avoid air embolism after surgery. Post-surgery pulmonary hypertension is also worth paying attention to. Long-term follow-up is necessary to assess the outcomes of surgery.

Performing Double Valve Replacement (DVR) on a patient with previous pneumonectomy is a challenge, not only for the surgery, but also for the postoperative periods. Pneumonectomy would not only alter the anatomical position in thorax, but also reduce the respiratory reserve since the pulmonary vascular volume was cut by half. Surgical technique of complex cardiac surgery could be alternative, such as median sternotomy, Upper Ministernotomy (UMS) and lateral thoracotomy [1-3]. However, it is controversial which technique is optimal, especially for previous pneumonectomy. Complications of DVR contain prolonged mechanical ventilation, re-intubation, acute kidney injury, cerebrovascular accident, sepsis, atrial fibrillation and so on, let alone with previous pneumonectomy [4]. This report presents a Chinese woman with 30-year history of pneumonectomy who suffered from rheumatic valve disease. A DVR surgery through standard median sternotomy was performed, and she had a transient cerebral infarction postoperatively.

A surgery via median sternotomy was performed. The right pleura were kept intact. We mobilized the adhered tissue between the pericardium and left chest wall carefully. After suspending the pericardium rightwards, we got the satisfactory exposure for DVR (Figure 2). With Cardiopulmonary Bypass (CPB) initiated and myocardial protection maintained, two mechanical prostheses were implanted in mitral and aortic valve via interatrial groove and aortic root approach respectively. An Edward MC3 ring was implanted in tricuspid annulus. Heart resuscitated autonomously. The aortic crossclamp time was 71 minutes and the total bypass time was 106 min. 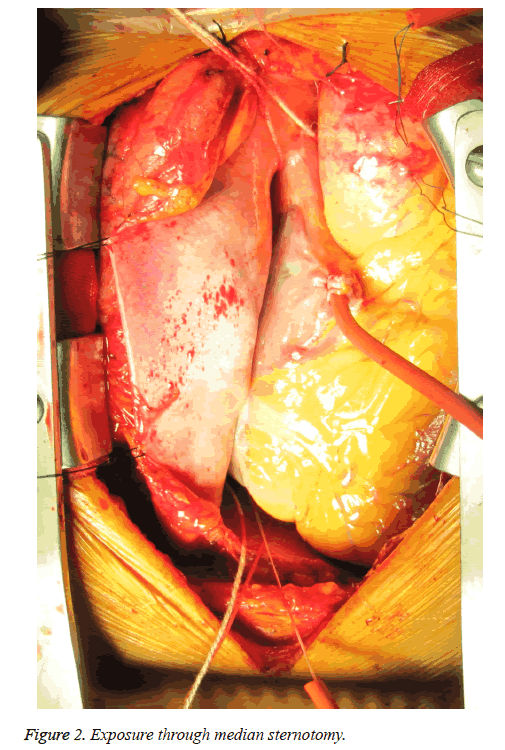 On the first day after surgery, the patient felt weakness of her right leg and left arm with stable vital signs. Physical examinations showed reduced myodynamia, level I for the right leg and level II for the left arm, accompanied with shallow left nasolabial groove. Cranial CT scanning indicated multiple cerebral infarctions in right temporal lobe, right frontal lobe and bilateral parietal lobe, respectively (Figure 3). However, all the neural signs disappeared the next day. The patient was extubated 4 d after the surgery and the remaining recovery was uneventful. 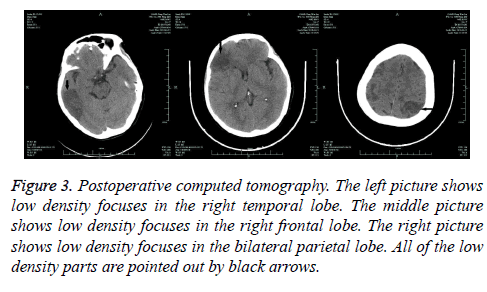 During 6 months of follow-up, the patient had none complications and the replaced valves functioned well with LVEF 55% shown by the echocardiography.

Median sternotomy was still the most common approach. As in our systematic review, it was adopted to 15 of 23 patients as the approach of CABG and/or valve surgery [10]. Median sternotomy could offer a good sight for both CABG and valve replacement, especially MVR. All the MVRs we review here were done via median sternotomy, which is correlated with our conclusion. But in some occasions, when the heart is far away and shifted into one side of chest and the base of the heart is displaced posteriorly, which leads to the plane of the mitral valve is parallel to the surgeon’s line of vision, a transseptal approach is suggested for mitral valve replacement via median sternotomy [10]. Lateral thoracotomy was adopted for CABG and AVR [6,7], thoracotomy could provide satisfactory exposure of aortic root and ascending aorta, as well as coronary arteries. We chose to use median sternotomy, as it could avoid right pulmonary injury and was convenient for cannulation. Although there were tissue adhesions, we found the exposure was good enough for all the procedures.

The patient developed cerebral infarction on the first day after surgery. Thromboembolism was usual after valve replacement. It was reported that microthrombi had been observed in 53% of single stenotic aortic valves [22]; the risk was even higher for mechanical prosthesis [23]. Air embolism was alternative, while the incidence of retained intracardiac air was reported to be 73% after cardiotomy [24]. Mechanical valve [25] and CPB [26] could be the sources of micro bubbles leading to air embolism. For our patient, it’s reasonable to consider air embolism rather than thrombus as the culprit of postoperative cerebral infarction, because there were multiple infarctions appeared quickly after surgery with transient symptoms. Though the patient had atrial fibrillation, no evidences of thrombus in the left atrial were found. The apical pericardium was found adhered to chest wall during surgery, thus complete air excluding after DVR was difficult, especially for the apical part. Our case seems to be the first reported post-surgery cerebral infarction ever in patients with previous pneumonectomy who received valve replacement. We would like to advise more attention paid to the air excluding for this sort of patients, and an intraoperative Transesophageal Echocardiography (TEE) was also suggested.

The presurgery respiratory reserve is an important prognostic factor for patients who would undergo open cardiac surgery, especially those with previous pneumonectomy. There are many issues need to be raised before surgery, such as avoidance of fluid overload preoperatively, protection of phrenic nerve during the mediastinal dissection, and internal thoracic artery harvesting for coronary artery bypass cases [8]. The operation of DVR could give an advantage for pulmonary artery pressure in long term, but might have an impact on pulmonary circulation perioperatively. Although it’s not clear whether patients with previous pneumonectomy are susceptible to pulmonary hypertension crisis, post-surgery pulmonary artery pressure should be monitored, as the vascular volume reserve is decreased. Studies showed that 36% of participants with previous pneumonectomy turned out to have mild or moderate pulmonary hypertension [27]. To deal with this possible complication, we kept the right pleura intact, protected pulmonary vessels during surgery, and used diuretics to avoid pulmonary edema and reduced pulmonary blood pressure. We observed that the patient had moderate pulmonary hypertension after surgery and gradually fell to normal range 6 months later.

This case is a successful attempt that a median sternotomy could be taken as the approach of DVR on patient with previous pneumonectomy. As there might be adhesions induced by previous surgery, intra-surgery air excluding is important. Post-surgery pulmonary hypertension is also worth paying attention to. Long-term follow-up is necessary to assess the outcomes of surgery.