Abdulrahman A. I. AL-Yahya* and Mohammed Asad

Gum arabic is a dried, gummy exudate obtained from the stems and branches of Acacia senegal and Acacia seyal. It is edible and is rich in non-viscous soluble fiber [1].

It is widely used throughout the world especially in the Arabian countries, where it is chewed or its powder is added to juices to make them viscous. Apart from this, it is used commercially as a stabilizer, thickening agent and emulsifier, mainly in the food, textile, pottery, lithography, cosmetics and pharmaceutical industries [2].

Though gum arabic is consumed and used commercially, it is generally considered as ‘inert’ without any pharmacological effects [3]. This is despite the fact that this gum is used traditionally in different parts of the world for treatment of internal and external inflammations. Gum arabic is reported to possess antioxidant [4,5], renal protective [6,7] and antidiabetic effects [8,9]. Furthermore, gum arabic is reported to prevent development of indomethacin induced gastric ulcers in rats [10].

Since, gum arabic is widely used for consumption and is a constituent of many food and pharmaceutical preparations; the present study was envisaged to explore its effect on stomach in normal animals and on different experimentally induced gastric ulcer models in rats. The study also determined the influence gum arabic on the antiulcer effect of ranitidine, a histamine receptor (H2-receptor) blocker.

Albino rats of Wistar strain weighing between 175-225 g were used. The experimental protocol was approved by the Institutional Scientific Committee. Rats were maintained under standard conditions in an animal house and were fed with pellet food and water ad libitum.

Gum arabic was purchased from the local market. The sample was identified by Prof Adulmoneim Sadabi of College of Applied Medical Sciences, Shaqra University (Saudi Arabia). A voucher specimen is preserved in the institute for future reference. Ranitidine was purchased from local pharmacy store. Chemicals used in the study were of analytical grade that were procured from different manufacturers.

Gum arabic was subjected to preliminary phytochemical analysis to detect the presence of phytoconstituents such as carbohydrates, proteins, amino acids, saponins, tannins and phenolic compounds, flavonoids and glycosides.

The animals were divided into six groups in a way that there were at least six surviving animals in each group at the end of the experiment. All the drugs were suspended in water. Except for determination of ulcerogenic potential, the animals were grouped as follows. The first group of animals received vehicle (2 ml/kg, p.o) while the second and third group of animals were treated with gum arabic suspended in water at doses of 500 mg/kg and 1000 mg/kg orally. The fourth group received ranitdine (50 mg/kg, p.o) and the fifth and the sixth groups were treated with combination of ranitidine (50 mg/kg, p.o) with gum arabic (500 mg/kg, p.o) and gum arabic (1000 mg/kg, p.o) respectively. The duration period and time of administration of drugs is mentioned under individual methods.

The ulcerogenic potential was determined by administration of gum arabic at the above mentioned doses to normal healthy rats for 4 days. Aspirin (22 mg/kg, p.o) was used as standard ulcerogenic agent while one group of animals was kept as normal healthy control and they received only vehicle [11]. On the 5th day, the animals were fasted for 24 hr and were given the gum arabic or aspirin. After 6 hr of drug administration, animals were sacrificed and stomachs were cut along the greater curvature and the ulcers were given scores based on their intensity; 0=no ulcer, 0.5=red colouration, 1.0=spot ulcers, 1.5=haemorrhagic streaks, 2.0=ulcers ≥ 3 but ≤ 53=ulcer>5.

Gastric ulcers were induced by following the method described by Asad et al. [12]. Under light ether anesthesia, laporatomy was performed; glacial acetic acid (0.05 ml) was applied onto the anterior serosal surface of the stomach using a mould of 6 mm diameter. The animals were treated once daily for 10 days as mentioned above, after induction of ulcer. Rats were sacrificed on the 10th day; stomachs were removed for determination of ulcer index and ulcer score. The ulcer index was calculated using the formula

The ulcers were given scores based on their intensity as follows

The stomach was then subjected to histological examination after staining with H & E stain. The regenerated lining epithelium was observed in all the samples.

The pyloric ligation was done under ether anaesthesia on rats fasted for 36 hr. The drugs were administered intraduodenally immediately after pylorus ligation. Animals were sacrificed 6 hr later. The stomach was isolated for determination of ulcer index using the formula mentioned above. The gastric juice accumulated in the stomach was centrifuged and the total acidity [14], mucin [15], pepsin content [16] and total proteins [17] were estimated.

The rats were fasted for 36 hr before administration of ethanol (1 ml/200 gm, p.o). Ranitdine and/or gum arabic were administered 1 hr before ethanol administration. After 1 hr, animals were sacrificed, stomachs were isolated and ulcer index was determined.

Gum arabic at two different doses and/or ranitidine was administered 30 min prior to subjection of stress. The animals were placed in a restraint cage and the cage was placed at a temperature of 2°C for 2.5 hr. The animals were sacrificed and ulcer index was determined.

Coumarins, flavonoids, tannins, saponins and carbohydrates were found to be present in gum arabic.

Administration of gum arabic at both doses for five days to normal animals did not produce any gastric damage. Aspirin produced bleeding indicating severe gastric damage and an increase in the ulcer score (2.0 ± 0.894). 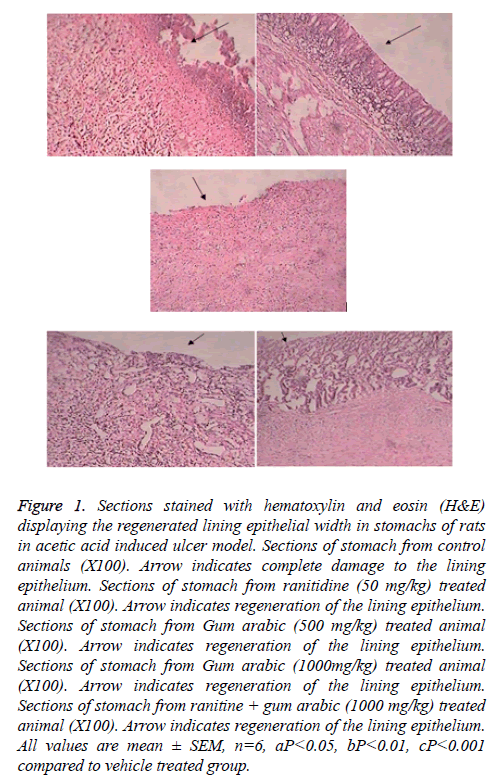 In the present study, gum arabic alone or when administered along with ranitidine showed dose-dependent antiulcer effect in all the tested experimental models in rats. As mentioned earlier, gum arabic has been reported to reduce the development of indomethacin induced gastric ulcers [10]. The present study was conducted using different experimental models to study the effect of gum arabic on gastric and gastroprotection [19]. The results of the present study substantiate earlier report on the antiulcer effect of gum Arabic [10]. It also produced additive effect when administered along with a ranitidine, a known antiulcer agent that acts through H2- histamine receptors [12]. The present study was evaluated using two different doses of gum arabic orally; 500 mg/kg and 1000 mg/kg. These doses were selected by pilot studies on acetic acid induced gastric ulcers. Doses less than these were ineffective. The healing of acetic acid induced ulcer in rats is known to resemble that of human peptic ulcer disease and this method is the most widely used method to determine effect on gastric ulcer healing [19]. Acetic acid when applied to the serosal surface at the antral region of the stomach penetrates it and produces ulcer similar to that observed in humans. Drugs that decrease gastric acid and pepsin secretion and/or increase secretion of gastroprotective mucus are known to increase gastric ulcer healing in this model. Gum arabic increased healing of gastric ulcers in a dose dependent manner and also produced a non-significant additive effect when given along with ranitidine. To deduce the mechanism of antiulcer effect, its effect on other models of gastric ulcers was studied. In pylorus ligation induced ulcer, gum arabic reduced gastric secretion and increased gastric cytoprotection as evident by reduction in reduction in acid and pepsin secretion and an increase in mucin secretion [13]. Furthermore, gum arabic produced a significant additive effect when administered along with ranitidine. This suggests that gum arabic considered by many as inert has both antisecretory effect and gastric cytoprotective effects. To further explore the cytoprotective effect of gum arabic, ethanol induced gastric ulcer and indomethacin gastric ulcer models were used. The gastric lesion produced by ethanol induced gastric ulcers is due to stasis in gastric blood flow that leads to the development of the hemorrhage and necrosis. Ethanol is known to rapidly penetrate the gastric mucosa causing damage to the plasma membrane that causes increased membrane permeability to sodium and water. There is also a massive intracellular accumulation of calcium. All these events lead to cell death and exfoliation in the surface epithelium [18]. Gum arabic was effective in this model indicating that it possesses gastric cytoprotective effect. Combination of gum arabic with ranitdine was more effective compared to gum arabic alone. We assume that the gummy nature of gum arabic might also have contributed to this cytoprotective effect. The first generation non-steroidal anti-inflammatory drugs are known to produce gastric irritation and ulcers due to inhibition of cytoprotective prostaglandin synthesis [19]. Of these, indomethacin is a very potent ulcerogenic agent. The gum arabic was effective in reducing ulcer index. The result confirmed the cytoprotective effect of gum arabic. This cytoprotective property of the gum arabic may be due to its antioxidant property [5]. Stress induces ulcers are due to release of histamine, a known stimulator of acid secretion [19]. Stress also causes an increase in gastric motility that increases folds in the stomach. These folds are susceptible for damage by gastric acid. Agents that reduce gastric motility and/or gastric acid secretion prevent ulcer formation in this model. Gum arabic and ranitidine reduced stress induced gastric ulcers. Since, there is no report on this effect of gum arabic on gastric motility, we assume that prevention of ulcer in this model may be solely due to gastric antisecretory effect. The exact constituent responsible for the antiulcer effect is not known. However, earlier reports indicate that flavonoids possess good antiulcer effect due to their antioxidant effect [20]. As mentioned earlier, gum arabic is a known antioxidant and this would have contributed to its antiulcer action. Further, arabinogalactan, present in gum Arabic [21] has been reported to possess antiulcer effect in rats. It is known to reduce development of ethanol induced gastric ulcers in rats [22]. To conclude, gum arabic possesses good antiulcer effect and it potentiates the antiulcer effect of ranitidine in rats. Some of the chemical constituents present in gum arabic are reported to possess antiulcer effect in earlier studies.