In this study, the inhibitory effect of transmembrane PBLs on HepG2 hepatocarcinoma and the potential application of PBLs on immune system of KM mice loaded with HepG2 hepatocarcinoma were carefully investigated and discussed. The animal model was established via inoculation of HepG2 hepatocarcinoma cells at the hind thigh of KM mice. Recombinant vector plasmids were transfected at the same site for gene therapy by injection to observe the inhibitory effect of PBLs on growth of tumor. A panel of genes such as IL-2, IFN-γ and HSP70 from tumor tissues at various time intervals were analyzed by RT-PCR. Flow cytometry was used to evaluate the proliferation and cytotoxicity of splenocytes after PBLs transfection. Synergistic effect of PBLs with HSP70 was also studied. It was found that the growth of tumor was significantly suppressed after the transfection of PBLs. Under the conditions of presence of PBLs, the proliferations of splenocytes and cytolysis in early phase of tumor development were significantly enhanced, and this antitumor effect was further improved by the synergistic effect of PBLs with HSP70. Therefore, the membrane-type PBLs might behave as an effective immunoregulator to enhance antitumor immune responses and the antitumor immunity is improved by the combined effect of PBLs and HSP70.

Costimulatory signal is necessary to stimulate the response of effective cellular immune [1-3]. The B7 family and other costimulatory molecules play an important role in the process of costimulatory signal transmission [4,5]. The binding of CD28 and B7 molecules on the surface of T cells seems to provide the primary costimulatory signal for T cell activation [6-8]. Various membrane surface molecules are located onto T cell surface. These molecules guarantee the antigen recognition of T cell, interactions with other immune cells and receiving signal stimulation [8-12]. Also, they provide an important fundamental for the identification and isolation of T cells and T cell subsets [7,11,13]. Due to the generation and transmission of costimulatory signals, the apoptosis of target cells can regulate the immune response artificially [14-16]. PBLs might act as a ligand for reverse transmission of signals to affect tumor immunity correspondingly [17-19]. In order to investigate this new mechanism of PBLs molecules, hepatoma HepG2 cell strain of KM mouse was used to build a solid tumor model in thigh muscle to study the inhibitory effect of PBLs molecule on HepG2 solid tumor and the influence on immune system of tumor bearing KM mice.

Twelve KM mice were taken to conduct the measurements. The plasmid PBLs was dissolved in saline solution and injected into the muscle of left thigh of the mice using in situ injection method (0.1 mg per KM mouse). After injection of PBLs solution, each three mice were killed after 12 h, 24 h, 36 h and 48 h, respectively. RT-PCR method was applied to detect the expression of PBLs in the muscle tissue of KM mice.

HepG2 hepatoma cells (1 × 106/mL) were inoculated into the muscle of left thigh of mice (0.1 mL per mouse). The mice were randomly divided into normal saline group (the blank control group), pcDNA group (the plasmid control group) and PBLs group (the treatment group) with 20 mice in each group. Plasmid was injected on alternate day after the second day of inoculation with each injection of 0.1 mL (1 mg/mL) the injection site was the position of inoculated tumor cells. These inoculated mice were dissected after two weeks. The tumor was taken and weighed to observe the growth.

The tumor mass of xenografted mice was 120 g and after treatment, the mass decreases to 400 mg and 500 mg for experimental and control groups, respectively.

After 3rdand 6th day of inoculation, five mice that were randomly selected from normal saline group, pcDNA group and PBLs group, respectively were killed for tumor tissue sampling. To the mice without tumor, the tissue at the position of inoculated tumor cells was taken. To the mice bearing grown tumor with size larger than 3 × 3 mm, the tissue at the junction of tumor and normal muscle was taken. The total RNA was extracted with Trizol reagent for reverse transcriptase reaction. Then 5 μL sample was taken as template from 60 μL reverse transcriptase product to amplify IL-2, IFN- γ and HSP70 by PCR, respectively. β-actin was used as internal reference. There were 40 cycles at the conditions of 85°C for 40 s, 60°C for 60 s, 40°C for 90 s, and 25°C for 120 s, respectively. Gel imaging analysis system was used to analyze the expression level of mRNA and relative expression value was calculated by the following equation: relative expression value (%)=(gray value of amplified bands of the gene to be test/gray value of β-actin gene amplification band) × 100%.

The in vitro experiments were repeated for 3 times. The experimental data were analyzed by statistical software package SPSS13.

Inhibitory effect of PBLs expression on tumor growth in vivo

PBLs plasmid was injected into the muscle of mice, and the expression of PBLs mRNA was detected in muscle tissue after 12 h, and the peak value reached to peak at 24-48 h, which could not be detected after 60 h (Figure 1). After inoculation for 12 d, the average tumor weight (0.84 g) of PBLs group was less than that of pcDNA group (1.57 g) and normal saline group (1.61 g), which has significant difference (P<0.05). However, there was no significant difference between pcDNA group and normal saline group, suggesting that the expression of PBLs could be inhibited by gene transfection in T cells, which could probably inhibit the growth of tumor cells. 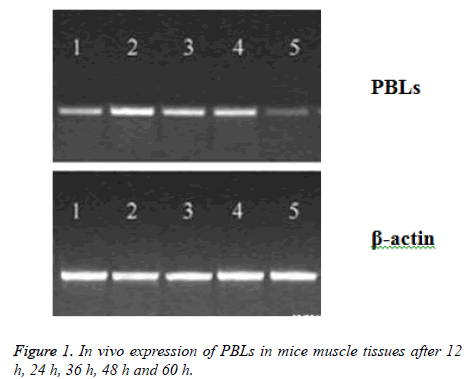 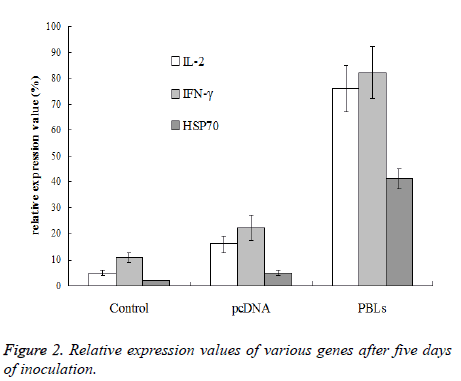 After the 10th day of inoculation, the expression of IL-2 and IFN-γ in PBLs group did not show further increase comparing with the results obtained above. However, the HSP70 expression in normal saline group, pcDNA group and PBLs group was all enhanced (Figure 3). Therefore, it can be concluded that PBLs can promote the expression of positive immune related genes in the early stage of tumor growth. 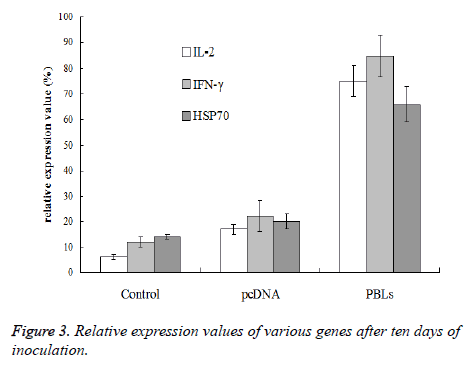 Effects of PBLs on enhancement of splenocytes proliferation and cytotoxicity 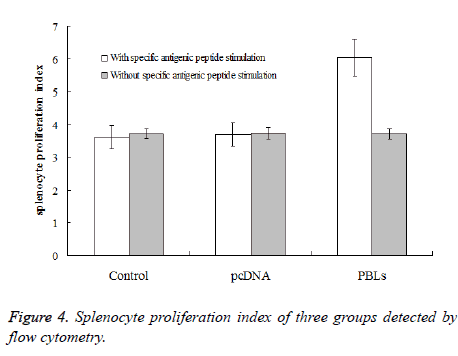 Two-color analysis of the expression of PBLs on mouse spleen B cells was shown in Figure 5. BALB/c splenocytes were simultaneously stained with KM mouse anti-mouse IgM (a) mAb DS-1 and purified anti-mouse PBLs mAb 1D3. The staining of primary antibody was detected with FITCconjugated goat anti-rat lg. 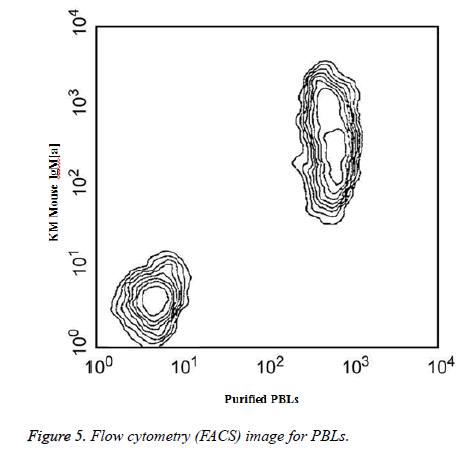 In vivo expression of HSP70 and PBLs in mice muscle tissues after 5 h, 10 h, 15 h, 20 h, 25 h, 30 h, 35 h and 40 h were shown in Figure 6. Western Blot used denaturing Polyacrylamide Gel Electrophoresis (SDS-PAGE) for separation of protein mixture; the proteins were transferred to solid supports after separation and solid phase carrier absorb protein with non-covalent interaction, which maintains the invariant properties of antigen protein or polypeptide onto membrane. Solid carrier protein or polypeptide behave as antigen and react with its corresponding antibody and enzyme labelled antibody to detect the expression of specific proteins through chromogenic substrate.

Synergistic effect of PBLs with HSP70

So far, PBLs has been used as the receptor molecule on the surface of T3 cells in the studies of membrane-type PBLs [5-7]. Generally, HSP70 is considered as the ligand of PBLs [8,9]. The signal produced by synergistic effect of HSP70 and membrane-type PBLs can prevent the activation of the cell and negatively regulate the cell immunity. However, if membranetype PBLs inhibits receptor only, soluble PBLs should enhance the immune response by blocking effect. Previous studies have found that soluble PBLs does not produce an immune enhancing effect, but generates an immunosuppressive effect [10-12]. In addition, some studies have found that membranetype PBLs is not only expressed on the surface of cells, but also on the surface of other tissue cells, including tumor cells [13,14]. The function of expression of membrane-type PBLs in these cells is unclear. However, all these studies suggest that PBLs might have multiple biological effects.

In this study, it was found that T cells can enhance the immune function by transfecting the recombinant membrane-type PBLs eukaryotic expression plasmid into HepG2 hepatoma cells of vaccinated mice, which had significant antitumor effect. This result is not consistent with a previous publication which reported that membrane-type PBLs can induce T cell immune tolerance. The membrane-type PBLs is a receptor of the T cell surface, after binding with ligand for signal transduction, PBLs produced a series of changes within the cell. In current work, intramuscular injection of recombinant carrier of membranetype PBLs was directly conducted; this carrier effectively expressed in muscle cells but was difficult to transfect T cells. The possibility that membrane-type PBLs as cell surface receptor expression in mature muscle cell surface to induce the produce of positive immune effect by muscle cells is very small. Another possibility is that the membrane-type PBLs have ligand properties, which produced positive immune regulatory effect through the interaction with receptor of immune cells surface. Because only HSP70 molecules are known to bind with membrane-type PBLs, the existence of other receptor molecules remains unclear. In this research, the method of local transfection was taken to allow the expression of membrane-type PBLs only in specific position-the thigh muscle cells of KM mice. The free cells that can contact membrane-type PBLs or even generate biological effects include macrophages, T cells, B cells and granulocytes [18,19]. We speculate that in this case the membrane-type PBLs may not have a direct effect on T cells, but indirectly activate T cells via activation of macrophages or antigen cells. Because HSP70 that combined with PBLs can express in a variety of tissue cells including macrophages, the PBLs molecule will react with these cells. The RT-PCR results obtained with pure HepG2 cell samples showed very weak expression of HSP70 only, the possibility that PBLs molecules reacted with the HepG2 cells locally inoculated can be excluded.

In this study, we have found that the membrane-type PBLs and HSP70 could have synergistic effect. HSP70 as a molecule having clear physiological functions can interact with its receptor (expressed on the surface of activated T cells) to maintain the activity of T cells or further enhance the activity and turn it into memory T cells. The transformation is independent and not restricted by other molecules, suggesting that the mechanisms of membrane-type PBLs signal is activation of T cells eventually, and produce synergistic effect with HSP70 based on the activation. After 2 weeks of tumor cells inoculation, HSP70 molecule started to function.