#These authors have contributed equally to this work

Bamboo salt is a traditional Korean baked solar salt, processed by packing the solar salt (sea salt) in bamboo tubes and heating several times at high temperatures. The anti-tumor activity of bamboo salt was investigated and compared to those of other salt’s samples. Though solar salt and purified salt exhibited high tumor weight, bamboo salt is associated with a lower weight of tumor. Bamboo salt baked nine times (9X) showed greater increased in anti-tumor activity than salts baked once (1X) or three times (3X). The growth rate, of 9X baked bamboo salt in treatin mice Splenocytes was determined by a MTT Assay. This rate of proliferation was higher than that achieved with 1X baked bamboo salt by FBS, LPS or Con A. Purified and solar salts had relatively the lowest growth rate proliferation effects. Compared to the other salt samples, 9X bamboo salt significantly (p<0.05) reduced ALS, AST and BUN levels. The bamboo salts, especially 9X bamboo salt, also significantly (p<0.05) increased the cytokine levels of TNF-α and IL-1β compared to the other salt samples.

Bamboo salt as a functional food, first produced in Korea, has been widely used in Easten Asia. Bamboo salt was first produced by a famous Buddhist Priest named; Jin-pyo Yul-sa, in Korea 1300 years ago [1]. For the manufacture process, the main raw materials of bamboo salt are solar salt (natural salt obtained from salt pond by sun drying) and bamboo grown for 3 years. Solar salt is put into a bamboo tube (about 8 cm in diameter and approximately 30 cm in length), that is sealed with natural red clay, and baked at 1000°C~1500°C using pine for fuel [2]. Bamboo salt baked once (1X) can be used as table salt. When the solar salt is baked in the bamboo case three (3X) or nine (9X) times, the salt absorbs minerals from the bamboo and clay and melts into a liquid during the baking process. The quality and medicinal properties of the bamboo salt are increased by more rounds (times) of baking. The 9X bamboo salt has been used as a traditional folk medicine in Korea [3]. Pharmaceutical research efforts have concentrated on evaluating the beneficial activities of bamboo salt such as; anti-cancer and anti-ulcer effects [4].

Bamboo salt is used as a folk medicine in Korea, after bamboo salt is baked more times; bamboo salt contains more iron, silicon, and potassium. These functional trace elements could make the bamboo salt have numerous pathologic effects, such as inflammation, viral diseases, diabetes and cancer [5].

The cancerous tumor is an abnormal growth of body tissues. In general, tumors occur when cells divide and grow excessively in the body. Normally, cell growth and division are strictly controlled [6]. Metastasis is the spreading of a cancer from, one organ or part to another non-adjacent organ or part. The new occurrences of the disease, thus generated, are referred to as metastases [7]. Metastasis is a multi-step process that begins when a primary tumor acquires mutations and becomes invasive, and cells eventually enter the blood or lymph [8]. Metastases arise most commonly in the; lungs, liver, brain, and bone. Interestingly, the lungs are the most common sites for systemic sarcoma metastases, because of the substantial vasculature that feeds into these organs in addition to particular tropic factors [9]. Other cancers that often metastasised to the lung include; breast, colon, prostate, bladder, and various Neuro-blastomas [10].

S180 cells are a kind of sarcoma cells, using these cells to build animal model could determine the anti-tissue tumor effects. The sarcoma 180 mouse cell line is derived, from a sarcoma carried in Swiss Webster mice and has been described to grow in multiple inbred mouse strains due to β2- microglobulin deficiency, MHC class I destabilisation, and lack of recognition by host CTLs. Injection of these cells results in strain-dependent killing due to accumulation of ascites fluid [11]. BALB/c mice are distributed globally and are among the most widely used inbred strains in animal experimentations. BALB/c mouse was often used for in vivo cancer researches. Sarcoma 180 tumor-bearing mice model was, a mellow research animal model, used for the tumor and metastasis studies [12].

Bamboo salt had an anti-colon cancer effect [5], bamboo salt also might has the anti-sarcoma effect, so in this study, we show that the bamboo salt anti-tumor effect in sarcoma 180- transplanted mice is used as a human tumor model. We used the model to compare the anti-tumor activities of: 1X, 3X, and 9X baked bamboo salts. The effects of these bamboo salts were compared with that of common salts (purified and solar salts). Additionally, serum levels and splenocyte cell proliferation were assessed.

Bamboo salt and other salts

Mouse sarcoma 180 cells were purchased from the Korean Cell Line Bank of Seoul National University (Seoul, South Korea). A mouse was injected with sarcoma 180 cells, the sarcoma-180 cell line was cultured for 7-10 days in the abdominal cavity of a BALB/c mouse and the cultured cells were harvested with the peritoneal fluid and centrifuged at 1200 rpm for 10 min in Phosphate-Buffered Saline (PBS). The separated sarcoma cells were floated in PBS and centrifuged and their concentrations were adjusted to 1.0 × 106 cells/ml for the further animal experiment.

The 0.2 ml of 1.0 × 106 cells/ml sarcoma 180 cells was implanted subcutaneously, in the left groins of control and sample group mice. The control and normal groups’ mice were fed with normal diet and water. The sample group mice were fed with purified, solar and bamboo salts (1X, 3X and 9X) diets and normal water for 28 days. Then, the tumors were removed and weighed [11]. The tumor-growth-inhibition ratio (I.R.) was calculated using the following formula: I.R. (%)=(Cw-Tw)/Cw × 100 (Cw: Average tumor weight of the control; Tw: Average tumor weight of the experimental group). The animal protocol used in this study was reviewed by the Animal Ethics Committee of Chongqing Medical University (SYXK (Yu) 2012-0001).

Splenocytes were obtained by gentle disruption of the spleen of BALB/c female mice and filtration via a 40 μm Nylon cell strainer (Falcon, NJ, USA). The erythrocytes were lysed with 0.38% NH4Cl-Tris buffer (pH 7.4), while the remaining cells were re-suspended in RPMI-1640 with 10 mM HEPES, 10% Fetal Bovine Serum (FBS), 100 mg/L streptomycin, and 100 IU/mL penicillin.

Splenocytes (1 × 106 cells/ml) were, respectively, treated with mitogens (lipopolysaccharide, LPS and concanavalinA, ConA) at 10 μg/ml, and co-cultured with test samples in 24-well plates for 24 h, 48 h and 72 h at 37˚C in a humidified atmosphere of 5% CO2. The proliferation of splenocytes was measured by an MTT Assay [13].

Analysis of inflammation-related cytokines in serum by ELISA

For serum cytokines Assay, blood from the inferior vena cava was collected into tube and centrifuged (3000 rpm, 10 min, 4˚C). The serum was aspirated and assayed as described below. Concentrations of inflammatory-related cytokines TNF-α and IL-1β (Bio-legend, San Diego, CA, USA) in serum were measured by ELISA according to the manufacturer’s protocol (Biolegend, CA, USA). Briefly, after biotinylated antibody reagent was added in 96-well plates, supernatants of homogenized serum were incubated at 37˚C in CO2 for 2 h. After washing with PBS, streptavidin-peroxidase (HRP) solution was added and the plate was incubated for 30 min at room temperature. The absorbance was measured at 450 nm using microplate reader [14].

An Analysis of Variance (ANOVA) was performed and the results are presented as the mean ± Standard Deviation (SD). Differences between mean values of the individual groups were assessed with a one-way ANOVA and Duncan's multiple range tests. Differences were considered significant when pvalues were<0.05. The SAS v9.1 statistical software package (SAS Institute Inc., Cary, NC, USA) was used to perform all statistical analyses. 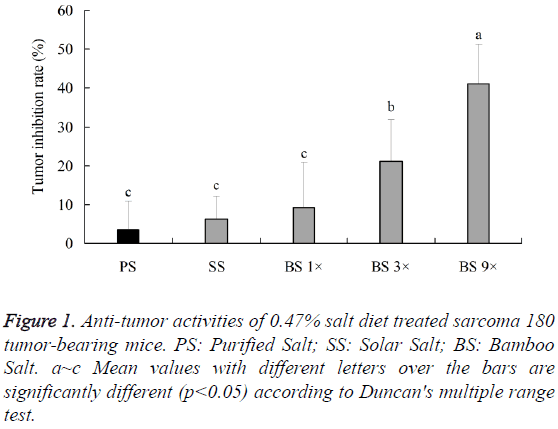 Effect of bamboo salt on serum levels of AST, ALT and BUN 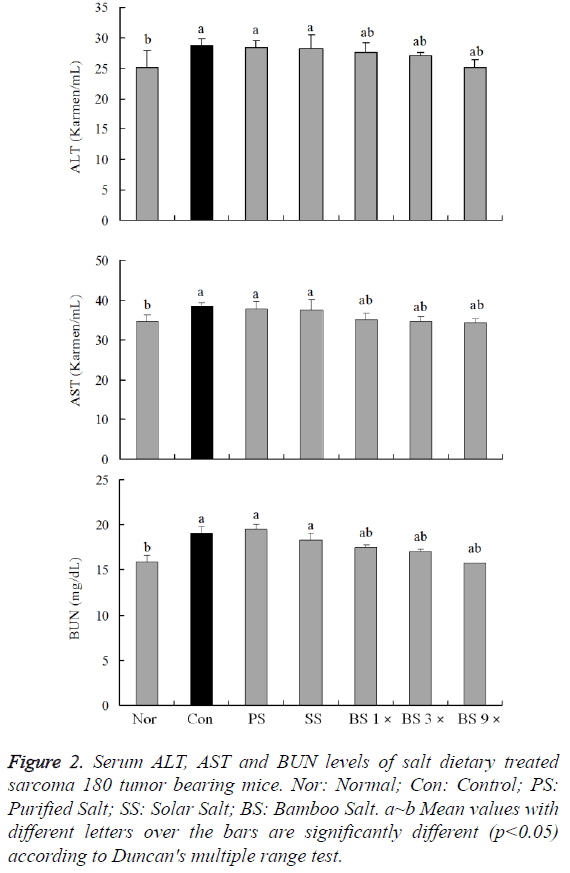 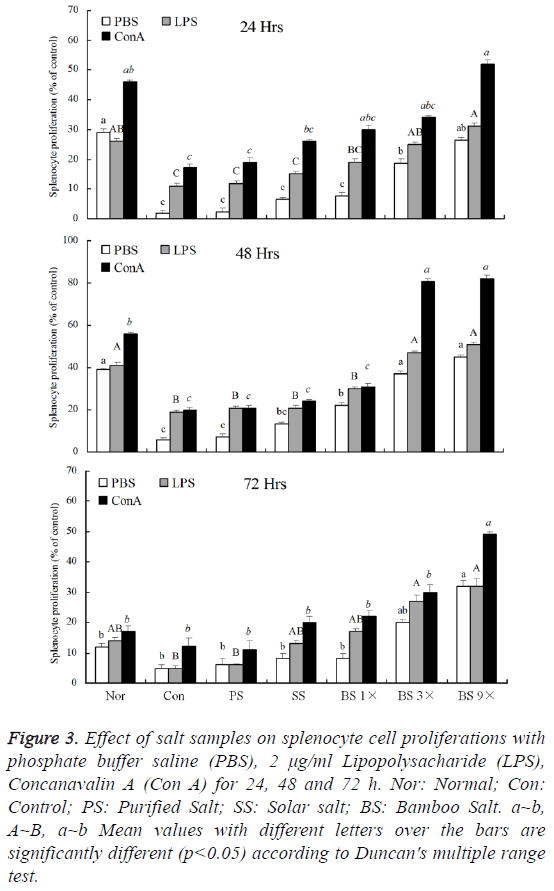 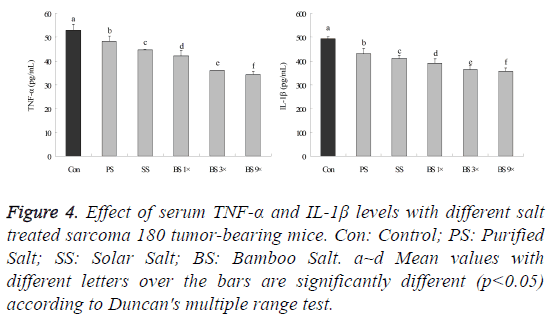 Bamboo salt has therapeutic effects on patients with various conditions, including: inflammation, viral diseases, diabetes, and cancer [2,4]. Evidence of the anticancer effects of the bamboo salts and underlying mechanisms were also observed in our previous experiments with HCT-116 and HT-29 colon carcinoma cells as well as AGS gastric carcinoma cells [5,15]. Those results demonstrated that the 9X bamboo salt has had the most potent in vitro anticancer effects, induced apoptosis, and anti-inflammatory activities. And bamboo salt also showed the in vitro anticancer and anti-inflammatory effect in oral cancer cell of TCA8113 human tongue carcinoma cells [16].

Cell injury can release endogenous damage associated with molecular patterns that, activate innate immunity. Cell injury can increase the risk of cancer [17]. AST and ALT are enzymes located in cells that leak out, into the general circulation when the cells are injured. AST is located in many body tissues, including the heart, muscle, kidney, brain and lung tissues [18]. A decreased BUN means creatinine ratio indicates malnutrition, and Syndrome of Inappropriate Antidiuretic Hormone secretion (SIADH), which is sometimes found with lung diseases, cancer, diseases of the central nervous system [19]. High levels of AST, ALT and BUN would in serum of tumor induced injury body.

Lymphocyte is a type of white blood cell in the vertebrate immune system, the three major types of lymphocyte are T cells, B cells and Natural Killer (NK) cells [20]. NK cells are a part of the innate immune system and play a major role in defending the host from both tumors and virally-infected cells. NK cells distinguish infected cells and tumors from normal and uninfected cells by recognizing changes of a surface molecule called MHC (Major Histocompatibility Complex). Class I NK cells are activated in response to a family of cytokines called interferon. Activated NK cells release cytotoxic (cell-killing) granules which then destroy the altered cells [21]. Lymphocyte decreasing would help the cancer development.

TNF-α and IL-1β are important regulators of host defense against tumor cells [22]. The observed increase in production of cytokines would suggest an enhanced ability of the host to combat the growth of tumors. Macrophages can be activated by β-glucans and other cell mediators to kill tumor cells by production of TNF-α and interleukins. The bioactivities of polysaccharides and polysaccharide-protein complexes are dependent on binding on the surface receptor of immune cells. These receptors, known as pattern recognition molecules, can recognize foreign ligands during the initial phases of the immune response [23]. At high levels of IL-1β, cancer cells receiving genotoxic insults, engage apoptotic pathways. Cotreatment with an inhibitor of IL-1β and TNF-α synthesis prevent carcinogen-induced lesions [24], the accumulation of IL-1 and TNF-α would lead to severe cancer.

Bamboo salts contain higher concentrations of minerals such as potassium, calcium, magnesium, and iron than purified or solar salts and the mineral contents of bamboo salts increase during the baking process [25]. Augmentation of the mineral contents is important for increasing anti-cancer activity [26]. Bamboo salt also contains more OH group than purified or solar salts, which may account for the fact that bamboo salt has a higher reduction potential [27]. Higher levels of minerals and more OH groups due to prolonged baking may have increased the anti-mutagenic, and anti-inflammatory and anti-tumor properties of the bamboo salt. The anticancer effects of the bamboo salts and underlying mechanisms were also determined in previous experiments with colon carcinoma cells as well as gastric carcinoma cells [5]. Those results showed that bamboo salt 9X had the best in vitro anticancer effect. Bamboo salt also showed the in vitro anticancer effects in TCA8113 human tongue carcinoma cells [16].

Results from the present study demonstrated that bamboo salts can decrease sarcoma 180 tumor-bearing tumor. The 9X baked bamboo salt has the greatest anti-tumor effects against MNNG compared to 1X or 3X bamboo salt as well as solar or purified salt. Bamboo salts also sarcoma 180 induced tumors. Bamboo salt, especially the 9X bamboo salt, has a strong activity as observed with tumor weight count, serum levels assay and lymphocytes proliferation. Increased mineral contents and reduction potential of the bamboo salts acquired during baking are important for augmenting these anti-tumor effects on sarcoma 180 treated tumors. Increasing the number of times, the bamboo salt was baked (up to nine times), particularly increased the properties of the salt in this study.

This work was supported by grant 20130290 to Solar Salt Research Center of Mokpo National University from Ministry of Oceans and Fisheries of Korea and the Program for Innovation Team Building at Institutions of Higher Education in Chongqing (grant no. CXTDX201601040).