Reactive oxygen species (ROS) play a significant role in pathogenesis of chronic renal failure (CRF) , leading to damage to protein, lipid and DNA.. The present paper focuses on the extent of free radical damage on lipid (measured as malondialdehyde, MDA) and effect on antioxidant defense mechanism (measured as vitamin E and vitamin C in the serum of CRF patients predialytically. The study was done at M.S.Ramaiah Medical Teaching Hospital, Bangalore, between October 2005 to june 2006.40 cases and 40 controls between age group of 25 - 60 were taken. Lipid peroxidation was measured in terms of MDA and antioxidant were measured as vitamin E and Vitamin C in serum of CRF patients before dialysis. The level of MDA, creatinine, blood urea nitrogen was significantly increased, antioxidant vitamin levels were decreased in CRF patients as compared to normal subjects. The elevation of ROS can lead to lipid peroxidation with progressive renal failure and also promote the complication of CRF. These patients can be supplemented with antioxidant vitamins for preventing lipid peroxidation and occurance of complica-tion.So, supplemention with antioxidant vitamins serves as a method of preventing oxidative stress among patients with renal disease

Chronic renal failure (CRF) is defined as the renal injury of a more prolonged nature which often leads to progre-ssive and irreversible destruction of nephron mass [1]. Though the incidence of chronic renal failure (CRF) or kidney disease is not as common as coronary heart disease, because of the population density and lack of adequate health care to match, there is a constant clamor for Dialysis and treatment facilities in India. Long term care for kidney disease continues to be expensive. For every one million population about 150 new cases of CRF occurs in India annually and for the country’s one billion population there would be 1,50,000 new cases every year. In United states more than 300,000 people are treated for it annually, a number that has doubled since 1989, accor-ding to the U.S. Renal Data Survey.

Chronic renal failure (CRF) is a pro-oxidant state, charac-terized by increased levels of free radicals, which are involved in progressive renal injury [2]. Reactive oxygen species play a significant role in the pathogenesis of many chronic diseases such as diabetes mellitus, cancer, chronic renal failure etc [3].Oxidative stress is imbalance between ROS generation and antioxidant system that scavenge or reduce ROS concentration. Redox imbalance caused by increased ROS production and/ or reduced antioxidant reserve, leading to pathological consequences including damage to proteins, lipids and DNA.

Antioxidants are first line defense against free radical damage and are critical for maintaining optimum health and well being. Supplementation of antioxidant vitamins (vitamin C and vitamin E) has been recommended for the prevention and treatment of CRF [4]. In this study, the extent of free radical- mediated damage on lipids ( measu-red as MDA levels) and effect on antioxidant defense mechanism(measured as vitamin C and vitamin E) was studied in CRF patients before dialysis to show the role of antioxidant in preventing the progression of CRF and for monitoring and optimization of antioxidant therapy.

The blood samples for the present study were collected from Nephrology department, M.S. Ramaiah Medical Teaching Hospital, Bangalore. The healthy volunteers who come for blood donation served as controls. The cases were 40 CRF patients, age 25-60 years,having inclusion criteria of serum creatinine more than 2mg/dl predialytically. The exclusion criteria were patients with no clinical or laboratory evidence of diabetes mellitus, liver diseases, lupus nephritis, acute illness, respiratory diseases. None of the patients had history of antioxidant vitamin supplementation. They were 40 healthy volunteers from blood bank of age 25-60 years of either sex who served as controls.

Informed consent was obtained from each patient before sample collection. The study was approved by medical education council at M.S.Ramaiah medical teaching hospital, Bangalore. From each patient 5 ml blood was collected before dialysis in sterile vacutainer without adding any additives and then centrifuged. The resulting serum was used for studies.

The creatinine and blood urea nitrogen (BUN) were estimated by an autoanalyzer DADE-DIMENSION® clinical chemistry system which employs a modification of the kinetic Jaffe’s reaction reported by Larsen[5] and urease glutamate dehydrogenase coupled enzymatic technique according to Talke H and Schubert [6] respectively. The serum malondialdehyde estimation was done by method described by Wilbur et al [7]. The vitamin E was estimated colorimetrically by a method using α, ά dipyri-dyl and ferric chloride [8]. Vitamin C levels were determ-ined after derivatization with 2,4- dinitrophenylhydrazone (DNPH) [9]. The statistical software namely SPSS 11.0 and Systat 8.0 were used for the analysis of the data and Microsoft Word and Excel have been used to generate graphs, tables etc. 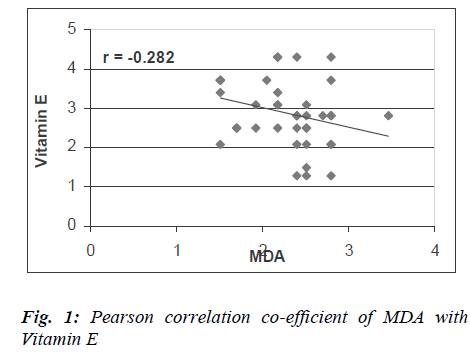 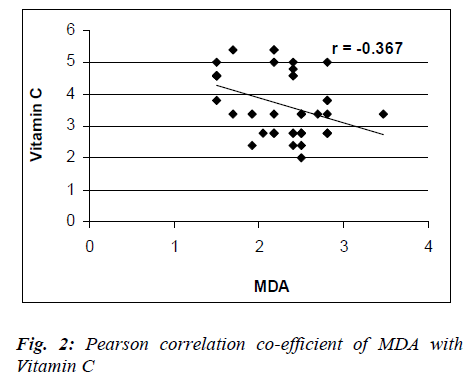 The correlation between serum creatinine, BUN and MDA is represented in table 2. Serum creatinine and BUN correlates positively with MDA.

There is association between increased levels of MDA and progression of renal insufficiency. MDA estimation is one of the most commonly used method for monitoring lipid peroxidation in biological samples. The renal source of reactive oxygen species(ROS) are vascular, glomerular and tubular cells. Circulating infiltrating cells (granulo-cyte-monocyte-macrophage) and platelets present in infla-mmatory renal processes also produce large amount of ROS. Different cellular enzymes including mitochondrial oxidase, lipoxygenase, cycloxygenase, myeloperoxidase, NADPH oxidase, xanthine oxidase, NO synthase have been identified as cellular sources of ROS formation [10]. ROS causes increased lipid peroxidation. In this study level of MDA in serum of CRF is higher than control. Increased concentration of MDA have been reported in plasma of hemodialyzed patient[11].

From the present study, it is established that CRF is associated with oxidative stress as evidenced by increase in MDA level with decrease in antioxidant vitamins because of their overconsumption or loss in urine. Further study is needed on a large sample size for better under-standing of the concept so that supplementation of anti-oxidant vitamins may be helpful in preventing oxidative stress and related complication in chronic renal failure patients.