The imbalance between reactive oxygen species (ROS) production and total antioxidant capacity in seminal fluid indicates oxidative stress and is correlated with male infertility. One of the rational strategies to counteract the oxidative stress is to increase the scavenging capacity of seminal plasma. In such cases a combination of antioxidants may e more useful treatment of male infertility. We therefore undertook this study the usefulness of antioxidant supplementation on seminal oxidative stress and its relation with sperm function test. In present study total Sixty one oligozoospermia patients and forty four fertility proved healthy donors with normal sperm analysis were included in the study. Seminal lipid peroxide, nitric oxide and total antioxidant power and various parameters were compared including sperm function test among the fertile control and before & after treatment of oligozoospermic patients. Of the 61 untreated oligoozoospermia patients the mean lipid peroxide and nitric oxide levels were found to be increased along with decreased total antioxidant power and sperm function ability as compared to fertile control subjects. However significant reduction in lipid peroxide and nitric oxide and improvement in seminal total antioxidant power, sperm function ability were observed after supplementary treatment of combined antioxidant.

Infertility is defined as the failure of conception at least 12 month’s of unprotected intercourse [1]. Infertility is a worldwide problem and approximately 8-10% of couples within reproductive age group are infertile [2]. It is estimated that globally 60-80 million couples suffer from infertility every year, of which probably between 15-20 million are in India alone [3]. In the era of evidencebased medicine specific management of infertility should be based on identifying reversible causes of infertility and treating them with suitable medications. However this may constitute a challenge. Since inspite of extensive research no identifiable cause can be found in 25% of infertile males [4]. Recently, oxidative stress has become the focus of interest as a potential cause of male infertility [5,6]. Normally, equilibrium exists between reactive oxygen species (ROS) production and antioxidant scavenging activities in the male reproductive tract. Under physiological conditions, spermatozoa produces small amount of ROS, which are needed for capacitation acrosome reaction and fertilization 7. However excessive amount of ROS produced by leukocytes and immature spermatozoa can cause damage to the normal spermatozoa by inducing lipid peroxidation and DNA damage [8,9,10]. High concentration of ROS was detected in the semen of 30-80% infertile men [11]. In view of this rational strategies with the goal of reducing concentration of oxidative stress may be effective in the treatment of male infertility. Initially Clinician can identify and treat the cause for increased ROS production like reproductive tract infection, smoking, varicocele etc.[12]. Following this, augmentation of the scavenging capacity of the seminal plasma can be an effective treatment for the male infertility.

A total of sixty One oligozoospermic patients (sperm count is below 20 X 106) visiting the Infertility Clinic, at Krishna Hospital and Medical Research Centre, Karad and forty four healthy normozoospermic matched non patients controls were included in the study. Institutional ethical committee clearance was taken. All subjects were in the age group between 21-45 years. They were advised to observe an abstinence of 3 days and to deliver semen sample on 4th day. After due orientation about nature of study a written informed consent was taken from healthy individuals and infertile male subjects. After liquefaction, ejaculates were analyzed for volume, pH, sperm count, percentage motility, morphology and sperm function test according to the guidelines prescribed by World Health Organization [13]. As per the WHO criteria semen specimens were divided into two group of normozoospermic having >20 X 106 sperms/ ml. with normal morphology and motility and oligozoospermic with <20 X 106 sperms/ ml.

After centrifugation seminal plasma was used for measurement of free radical production by estimating malondialdehyde[14] and assays of nitric oxide by Griess reaction[15]. In kinetic method in which nitrate is reduced to nitrite by copper coated cadmium granules. Total anti oxidant power in seminal plasma was measured as ferric reducing ability of plasma (FRAP) assay of Benzie I.F.F. [16].

Table 1 shows the distribution of sperm count, percentage sperm motility, percentage of functional sperm, lipid peroxide in term of MDA, nitric oxide and total antioxidant power in Normozoospermic and Oligozoospermic patients before and after treatment. 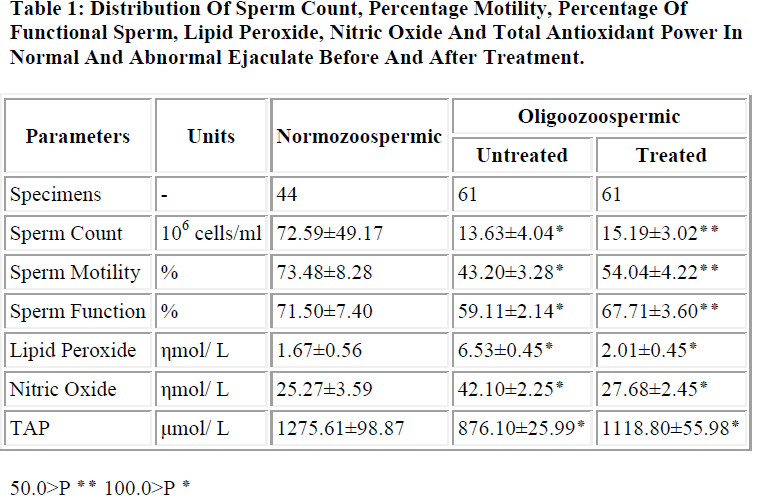 The identification of adequate molecular markers to diagnose a semen sample, in conjugation with the design of appropriate therapeutic strategies to combat defects and deficiencies, is decisive for resolving male factor problem. Among these, oxidative stress markers are relevant factors in male infertility, since they play a significant role in sperm physiology. A fine balance of these markers could determine the reproductive success [18]. Although the importance of seminal plasma in the protection of spermatozoa against ROS is well established as other few studies [6,7,10] have investigated its antioxidative properties, and the possible relationship between infertility and plasma antioxidant defence system.

The lipid composition of plasma membrane of mammalian spermatozoa is markedly different from mammalian somatic cells. They have very high levels of phospholipids, sterols, saturated and polyunsaturated fatty acids. Therefore sperm cells are particularly susceptible to the damage induced by excessive ROS release [19-20]. The most significant product of lipid peroxidation is malondialdehyde (MDA). Lipid peroxidation plays a major role in the aetiology of defective sperm function. This may lead to the onset of male infertility via the mechanism involving the induction of peroxidative damage to plasma membrane [20-21].

Nitric oxide (NO) is another oxygen free radical which is apparently generated by defective population of spermatozoa. NO is normally generated from L-arginine by three isoforms of nitric oxide synthase (NOs) [22] .The fact that iNOs (inducible nitric oxide synthase) deficient spermatozoa exhibited significantly higher in vitro fertilization rates than the wild type control, clearly suggests that Nitric oxide may be involved in the aetiology of defective sperm function. Nitric oxide clearly has a detrimental effect on normal sperm function inhibiting both motility and the competence of these cells for sperm – zona binding [23] . If the sperm lipid peroxidation and nitric oxide inhibits sperm maturation, the therapeutic intervention would be beneficial [22]. In the present study, increased levels of lipid peroxide and nitric oxide along with decreased total antioxidant power in seminal plasma of infertile male is an indicative of increased oxidative stress. A negative correlation was observed between the oxidative stress markers (Lipid peroxide and nitric oxide) and sperm function ability and sperm motility. This suggests that lipid peroxidation and nitric oxide were responsible for significant reduction in sperm function ability and sperm motility. A negative correlation between total ferric reducing ability of plasma and lipid peroxide and nitric oxide were observed respectively. Further after treatment with multiple antioxidants as supplementary to such individuals, significant elevated total antioxidant power along with decreased lipid peroxide and nitric oxide were observed. This change in status of seminal plasma positively correlated with impaired sperm function. Thus the present study suggests that multiple antioxidant treatment may be helpful to maintain the balance between prooxidant and antioxidant, which may prevent damage of sperm membrane by oxidative stress and help in improvement of the sperm function ability. Further studies are warranted to determine the structure and functional changes in sperm membrane lipid during the process of peroxidation and this may be useful in understanding the role of lipid metabolism in spermatozoa physiology and may help to develop novel therapeutic strategies for male infertility.