Uneventful pregnancy is a condition with changes in metabolism and physiological profile. Altered metabolic and hormonal status of the body in pregnancy may predispose to oxida-tive stress. Changing demand of the pregnant women for different nutrients like vitamins may counteract the damage done by such oxidative stress. The present study was aimed at evaluating the level of oxidative stress and level of antioxidant water-soluble vitamin C. Hence malondialdehyde (MDA) and plasma antioxidant vitamin C were estimated spectro-photometrically in blood of 60 primigravida and in 20 age matched controls. Increasing lev-els of MDA, a end product of lipid peroxidation with advancement of gestational age to-gether with decline in plasma vitamin C level in pregnant women as compared to nonpreg-nant control women revealed that pregnancy poses a body to excessive oxidative stress and ascorbic acid defense system may be helpful in combating the deleterious effects of oxidative stress if sufficient vitamin C is present in the plasma.

Process of oxidative conversion of unsaturated fatty acids to primary products known as lipid hydro peroxides and variety of secondary metabolism is referred as free radical process of lipid peroxidation. In healthy body Reactive Oxygen Species (ROS) and antioxidants remain in bal-ance. When balance is disrupted towards an overabun-dance of ROS, oxidative stress occurs. In mammals ROS are essential factors of cell replication, differentiation and growth during gestation. In women ROS play a role in remodeling of uterine tissue, implantation of embryo, set-tlement of villi and development of blood vessels that are the characteristics of gestation [2].
It has been seen that oxidative stress play important role during pregnancy, normal parturition and in initiation of preterm labour. Effects of oxidative stress are seen in pa-thophysiology of preeclampsia, hydatidiform mole, free radical induced birth defects and other situations such as abortions [3].

Therefore in this study product of lipid peroxidation ma-londialdehyde and antioxidant vitamin C was assessed in normal pregnancy to reveal the extent of antioxidant de-fense offered by vitamin C and evaluate the response whether the oxidative stress occurs in this physiological condition like pregnancy.

The present study was done in a rural based medical col-lege M.G.I.M.S Sevagram. The study was approved by the institutional Ethical committee. 60 primigrvida attend-ing Obstetrics and Gynecology OPD, were selected as cases. They were grouped as per age of gestation. Twenty each in I, II and III trimester. All subjects were vegetari-ans, not taking any drug, which could influence antioxi-dant levels ,with age more than 18yrs and blood pressure range within normal limits (Systolic blood pressure <140 mm Hg and diastolic blood pressure <90 mm Hg ). The subjects in whom date of last menstrual period not certain as well as with multiple pregnancies and with previous history of hypertension and diabetes were excluded. Twenty age-matched healthy control were included in this study. Informed consent was obtained from each patient before removal of blood sample.

End product of lipid peroxidation MDA was measured by an assay, which utilizes Thiobarbituric acid TBA and was based on acid, catalyzed decomposition of lipid hydro peroxide to malondialdehyde (MDA) which reacts with thiobarbituric acid to form a chromogen, monitored sphectrophotometricaly at 530nm. MDA value was ex-pressed as TBARS [4].

Plasma TBARS (MDA) levels were high during all three trimesters and all values were statistically significant (p<0.001) when compared with control group. Levels increased with progress of gestation from I to II, and then to III trimester in primigravida. Progressive decrease in Vitamin C levels was seen from I to III trimester and it was statistically significant (p<0.001) when compared to control group (Table I). 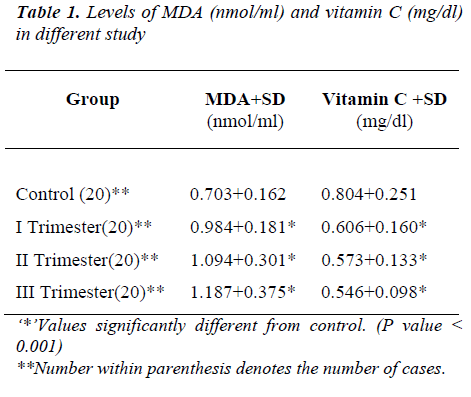 In the present study, a weak negative correlation between MDA and vitamin C but significant at (t = 0.05) was found.

Oxidative stress is a state of imbalance between genera-tion of reactive oxygen species (ROS) and the level of antioxidant defense system [5]. After conception the cor-pus luteum, placenta and developing embryo release hor-mones and growth factors and other substances into the maternal circulation that brings about different changes. Increased availability of substrates and precursors for fe-toplacental metabolism and hormone production is medi-ated by increase in dietary intake as well as endocrine changes that increase the availability of glucose and low density lipoprotein (LDL) cholesterol [6]. Maternal early gestation can be viewed as anabolic state in the mother with an increase in maternal fat stores and small increase in insulin sensitivity .In contrast, late gestation is better characterized as catabolic state with decrease insulin sen-sitivity (increase insulin resistance). An increase in insu-lin resistance results in increase in maternal glucose and free fatty acid concentration, allow for greater substrate availability for fetal growth [7]. Thus pregnancy is a stressful condition in which many physiological and me-tabolic functions are altered to a considerable extent.

Markers of lipid peroxidation (MDA) have been observed to be increased during the progression of normal preg-nancy as observed by Toescu V et al [8], Upaydhyaya [9], Patil et al [10]. Consistent with these previous reports an increase in MDA levels in pregnant women as compared to control nonpregnant women were observed in our study. Increase lipids levels in pregnancy may increase susceptibility of polyunsaturated fatty acids (PUFA) to peroxidation damage presumably by the free radicals that may lead to increased production of MDA. Lipid peroxi-dation is also induced in placenta. Lipid peroxides origi-nating from both the trophoblast and villous core com-partment are secreted into the maternal effluent possibly adding to levels in the maternal blood as additional per-oxidation cascades are initiated As placenta is rich in mi-tochondria it favors oxidative stress during pregnancy [11].

Our study is in agreement with the study by Rao, which showed a statistically significant decrease in levels of vi-tamin C in normally pregnant women when compared with control [12]. According to study by Roes in uncom-plicated pregnancy, concentration of vitamin C decreased during pregnancy. Hence in normal pregnancy there seems a balance between antioxidant and oxidant concen-tration despite modest oxidative stress [13].