Thamotharan B1*, Venkatraman B2, Anusuya A1, Chandrasekaran S3, Ramakrishnan S1 and Karthikeyan MP1

Bubble detector dosimeter is used to measure the neutron dosage in the premises. Removing noises from the image may be a difficult task for researchers even until date. There are numerous approaches and techniques that have its own limitations and benefits.

The study based on the concept of edge detection after denoising of digital image before getting data from an image, removal of noises from the image is necessary and thus becomes the first step in image processing [1]. Most of the natural images are assumed to have additive random noise which is modeled as a Gaussian. Thus this paper helps us to know how to apply different edge detection techniques and analyses its result and output images.

Edges accommodate important features and contain vital data. It considerably reduces the image size and filters out data that will be considered less relevant, therefore conserving the vital structural properties of an image. Most images contain some quantity of redundancies that may generally be removed once edges are detected and replaced throughout the reconstruction. Thus here the edge detection comes into play. Also, edge detection is one among the ways of constructing images that does not take up an excessive amount of space within the hardware. Here in this paper, we will discuss the four edge detection techniques namely:

The Sobel edge detector uses two masks, one is vertical and another one is horizontal. These masks use 3 × 3 matrices. Sobel has two main advantages: the random noise of the images are met with smoothing effects and since it is the differential of two rows or two columns, the element on the edge found on both the sides gets enhanced, thus the edge will be thick and bright [4]. This edge detection technique extracts all of the edges, regardless of direction. Thus the resultant image appears as a unidirectional outline of the objects in the original image. The regions which are constantly bright become black, while other regions become highlighted. The derivative can be applied in digital form in several ways. The operator consists of a pair of 3 × 3 convolution kernels, which are represented as follows:

Sobel operator, the gradient magnitude is given by:

The approximate magnitude which is faster to compute is given by [5]:

The angle of the orientation of the edge is given by:

Example taken in this paper is (Figure 1): 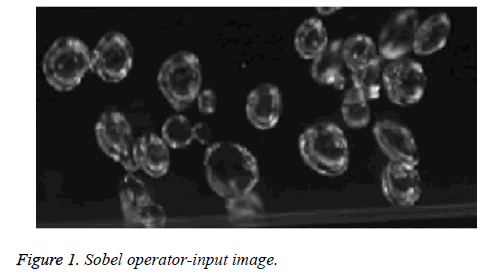 Thus, when Sobel operator is applied, the resulted image is a grayscale. Thus the result so obtained is (Figure 2): 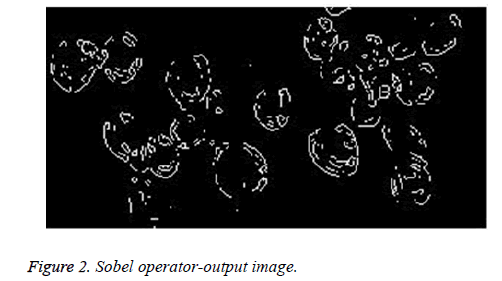 The Roberts cross operator performs a quick 2D spatial gradient measurement on an image. It is used to highlight the regions of high spatial frequency which often seems to be the edges detected in an image. The input to the operator often tends to be a grayscale image, the output will also be a grayscale image. Each pixel values at in the output represents the calculable magnitude of the spatial gradient at that time. The 2 × 2 convolution kernel given in Roberts cross operator edge detection technique is as follows:

One kernel is just the other turned by 90º, this can be similar to the Sobel operator. Thus the gradient magnitude is given by:

And the approximate magnitude which is faster to compute is given by:

The angle of the orientation of the edge is given by:

Example taken in this paper, Figure 3 is the input image.

When Roberts cross operator is applied, the resulted image is a grayscale image. Thus the result so obtained is (Figure 4): 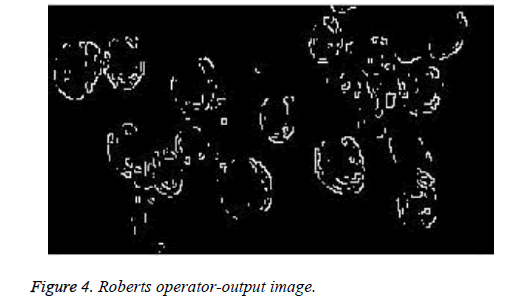 The Prewitt edge filter detects the edges by applying a horizontal and vertical filter in sequence. Both filters are applied to the image and then it is summed to get the final result. This edge detector is one of the best ways to calculate the magnitude and orientation that are found in an edge. It doesn’t place any important role on the pixels that are found closer to the center of the mask [6], unlike Sobel operator. This operator is restricted to eight possible orientations, but most direct orientation estimates don’t seem to be that much correct. The Prewitt mask thus used is a 3 × 3 convolution kernel:

This operator is restricted to eight possible orientations, but most direct orientation estimates don’t seem to be that much correct. This edge detector is estimated in the 3 × 3 neighborhood for all eight directions. Then one convolution mask is selected, which is of largest module [7]. Figure 5, the image is taken as input image. 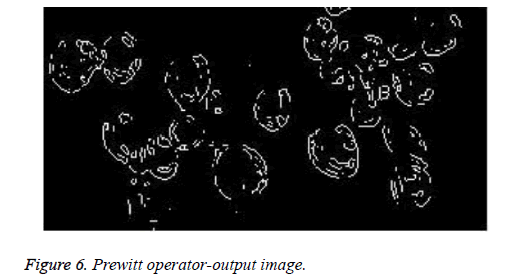 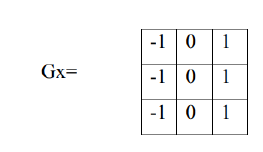 The canny edge detector is also well known to many as the optimal detector, it aims to satisfy three main criteria:

There are some steps involved in canny edge detection technique:

Filter out noise if any using the Gaussian filter.

Then find the intensity gradient of the image.

Then find the intensity gradient of the image.

Convolution kernel used in this technique is:

Then the magnitude and gradient strength are calculated.

Non-maximum suppression is used to remove pixels that are not found to be the part of an edge. Thus only thin lines (candidate edges) will remain.

• Pixel is accepted as an edge if the pixel gradient value is higher than the upper threshold.

• Pixel is rejected as an edge if the pixel gradient value is below the lower threshold [8].

• If the value is between the two thresholds, then it will be accepted only if it is connected to a pixel that tends to be above the upper threshold [8].

• The ratio between upper and lower threshold is between 2:1 and 3:1.

Figure 7 is the image taken as input image.

Thus the result so obtained after applying canny edge detection technique on the input image is (Figure 8): 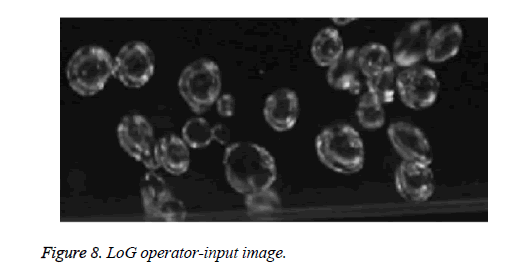 Since the convolution operation is associative, we will turn the Gaussian smoothing filter with the Laplacian filter, first of all, and then turn this hybrid filter with the image to attain the desired result. Doing things this manner it has 2 advantages:

• Since both the Gaussian and also the Laplacian kernels are sometimes much smaller than the image, this methodology sometimes needs far fewer arithmetic operations.

• The LoG (‘Laplacian of Gaussian’) kernel may be precalculated beforehand therefore only 1 convolution must be performed at run-time on the image.

The watershed method is used to get the initial segmented image [9]. Then it has been clustered. This approach has reduced the unwanted region by providing the area under suspicion.

Figure 9 is taken as an input image in this paper. 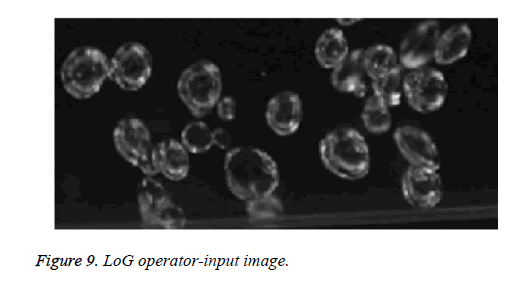 Thus the result so obtained after applying canny edge detection technique on the input image is (Figure 10): 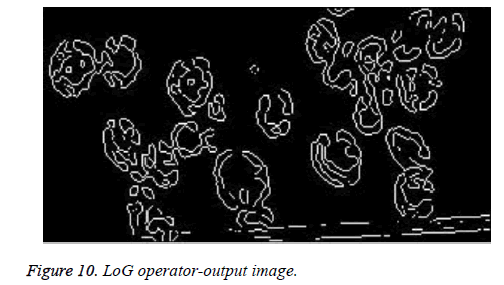 Thus, this paper allows us to get a clear idea about the edge detection techniques used in the digital images. Whereas in edge detection, various edge detecting operators are used on the same input image of the bubble dosimeter image to find the best technique. By visual perception, we can conclude clearly that the Sobel, Prewitt, and Roberts give low-quality edge maps relative to the others. A detailed illustration of the edges in an image of this bubble detector dosimeter is obtained through the canny and Laplacian of Gaussian ways. Among the assorted methods investigated, the canny methodology is in a position to find both strong and weak edges and appears to be more appropriate than the Laplacian of Gaussian. A statistical analysis of the performance offers a strong conclusion for this complicated category of images. This analysis of edge detection in the dosimeter bubble detector image will give good idea in the field of atomic to process the measure of the neutron dosage in the radioactive premises. This image processing based edge detector analysis can be applied in the application of bio-medical field to count the number of cells in the blood especially red blood cells and white blood cells.