An update on diagnostic value of biotinidase: From liver damage to cancer: Minireview.

The discovery of biotinidase (BTD) deficiency, an inherited biotin-responsive disorder has increased the interest in biotinidase. Impaired serum BTD activity has been reported in patients suffering from chronic liver diseases, and in rats with experimentally induced acute or chronic liver injury. Molecular biology techniques such as tandem mass spectrometry have added a new dimension to our understanding of the role for biotinidase in cellular metabolism that go beyond the classical roles for biotinidase in the recycling of biotin. Recently, biotinidase has been implicated in the diagnosis of cancers. Decreased BTD is suggested as a potential serological biomarker for the detection of breast cancer .Recent reports suggests the potential applicability of biotinidase in the fine needle aspiration (FNA) diagnosis of aggressive papillary thyroid cancer. The exact role of biotinidase in cancer remains to be established. Histone biotinylation is considered to play an important role in signaling DNA damage. As biotinylation of histones depends on biotin supply it may be decreased in BTD deficient patients thereby affecting signaling of DNA damage. Elevated serum biotinidase activity has been reported in patients with glycogen storage diseases. The focus of this review is to update the metabolic importance of biotinidase and to present the applications of BTD in the diagnosis of liver diseases and recently, certain cancers.

The carboxylases serve important roles in intermediary metabolism and their impairment can cause abnormalities in fatty acid synthesis, amino acid catabolism, and gluconeogenesis, resulting in the accumulation of abnormal organic acids. The absence or deficiency of biotinidase impairs the recycling of free biotin, thereby slowing the functioning of the biotin-dependent carboxylases.

Biotin deficiency in humans is rare because biotin is continuously being recycled from the biotin dependent holocarboxylases by the action of biotinidase. Under normal conditions these enzymes undergo proteolytic degradation to biocytin or biotinyl peptides. Cleavage of these breakdown products by biotinidase recaptures and recycles the free biotin for continued cofactor functioning.

Biotinidase is also important for making biotin bioavailable from bound dietary sources. Biotin in the diet is mainly present in a protein-conjugated form. BTD is secreted in pancreatic fluids and plays a critical role in releasing free biotin from biocytin and biotinylated peptides prior to absorption. Intestinal BTD may also be derived from the intestinal flora, intestinal secretions and brush border membranes [9,10].

BTD participates in the transport of biotin to peripheral tissues [9].Thus, biotinidase plays a crucial role in maintaining the free biotin pool in the body and deficient biotinidase activity has been shown to result in late-onset MCD in children.

In addition to hydrolytic activity, biotinidase has biotinyltransferase activity resulting in the transfer of biotin from biocytin to nucleophilic acceptors [11]. Biotinyl transferase activity occurs at physiological pH and at physiological concentrations of biocytin and, therefore, may be a major function of the enzyme in serum and other tissues. Recent studies have shown that biotinidase post translationally modifies histones by biotinylating them in the presence of biocytin and removing the biotinyl moiety from histones Pindolia et al [12].

Eleven distinct biotinylation sites in histones H2A, H3and H4 (Figure 2) have been identified [13]. Although the specific role of histone biotinylation is not known, biotinylation of histones appears to participate in the biological processes such as gene expression, and DNA repair. Firstly, biotinylation of histones has been shown to increase (more than 4 fold) early in the cell cycle (G1 phase) [14] and remain increased during later phases (S, G2 and M phase) compared with quiescent controls. Fibroblasts from patients with holocarboxylase synthetase deficiency have severe deficiency in histone biotinylation [15] .It remains to be determined whether this is associated with decreased proliferation rates. Recently, it has been shown that biotinylation of distinct lysine residues in histone H4 changes at specific phases of the cell cycle [16].Secondly, studies in chicken erythrocytes have provided evidence that biotinylated histones are enriched in transcriptionally silent chromatin [17].

Figure 1: The biotin cycle and its roles. Free, unbound, biotin is the coenzyme for four carboxylases in humans and mice: propionyl-CoA carboxylase (PC), β- methylcrotonyl-CoA carboxylase (MCC), pyruvate carboxylase (PC), and acetyl-CoA carboxylase (ACC). Holocarboxylase synthetase (HCS) catalyzes the covalent attachment of free biotin to apocarboxylases forming holocarboxylases. The holocarboxylases participate in amino acid catabolism, fatty acid synthesis, and gluconeogenesis. Biotinidase releases biotin from biocytin and/or biotinylated peptides generated from the proteolytic turnover of holocarboxylases, thereby recycling biotin and resupplying the free biotin pool. Biotinidase also mediates the release of biotin from biocytin and/or biotinylated peptides generated by the proteolysis of dietary proteins. Biotinidase may posttranslationally modify histones by biotinylating them in the presence of biocytin and removing the biotinyl moiety from histones. HCS can also biotinylate histones and produces biotinyl-AMP, which can then participate in the cGMP signaling pathway regulating gene expression. Free biotin is absorbed in intestine, recaptured in the kidney and transported in the cytoplasm by transporter proteins, sodium-dependent multivitamin transporter (SMVT) and monocarboxylate transporter 1 (MCT1) Pindolia, et al [12]. 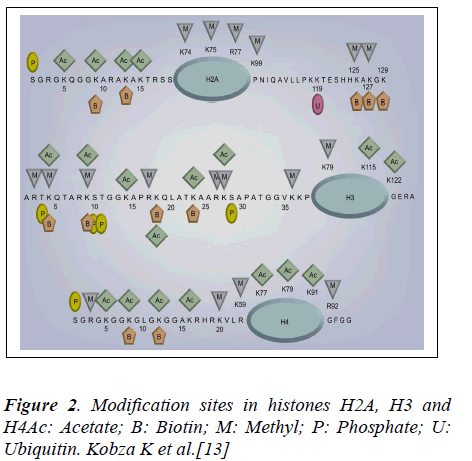 Thirdly, it is proposed that biotinylation of histones might play a role in the cellular response to DNA damage Biotinylation of K12 in histone H4 is suggested to play roles in gene repression, DNA repair, heterochromatin structures and repression of transposons to mediate genomic stability and minimize cancer risk in human cells and Drosophila melanogaster [17,18]. Formation of thymine dimers caused by exposure of lymphoid cells to UV light, resulted in the increased biotinylation of Histones [17]. If double-stranded DNA breaks are caused by exposure of lymphoid and choriocarcinoma cells to etoposide, biotinylation of K12 in histone H4 shows a rapid and transient decrease [18] .This suggests a role for histone biotinylation in signaling DNA damage.

As biotinylation of histones depends on biotin supply [19] it may be decreased in BTD deficient patients where biotin recycling is impaired [20].

The liver is thought to be the source of serum biotinidase. Activities of this enzyme are high in the serum, liver, kidney and adrenal gland [21].

BTD activity is known to exist in microsomes and mitochondria [21,22], while the presence of BTD in nuclei is controversial. Pispa proposed that 26% of the cellular BTD activity is located in the nuclear fraction [21], which was confirmed by subsequent immunocytochemistry studies [23]. However, no nuclear BTD was detected by Stanley et al [24].

1. Pyruvate carboxylase, the enzyme that is involved in the catabolism of glucose, catalyzes the conversion of pyruvate to oxaloacetate within the citric acid cycle. Decreased activity of this enzyme results in the accumulation of lactic acid and alanine.

4. The fourth carboxylase, acetyl-CoA carboxylase, located mainly in the cytosol and to a lesser extent in the mitochondrion, is involved in the regulatory step of fatty acid synthesis and catalyzes the conversion of acetyl-CoA to malonyl-CoA

In clinically symptomatic cases, urine analysis by gas chromatograph/mass spectrometry will identify elevation of ß-hydroxyisovalerate, lactate, ß-methylcrotonylglycine, ß-hydroxypropionate and methyl citrate, which build up due to the inactivation of the biotin requiring enzymes.

Biotinidase deficiency is a biotin-responsive, autosomal recessively inherited metabolic disorder resulting from mutations in the biotinidase gene [31]. Wolf has reported 150 mutations thus far [32] and depending upon the nature of the mutation(s), the enzyme deficiency maybe either complete or partial. Biotinidase deficiency is classified as either profound or partial based on the serum biotinyl-hydrolase enzyme activity (0–10% and 10–30%, respectively [33]. Despite its rarity, early recognition is crucial because expeditious treatment may reverse all of its manifestations [34].

The clinical symptoms of biotin deficiency can appear within a few weeks after birth or several years later. A wide spectrum of clinical manifestations, including abnormalities of the neurological, [35] dermatological, immunological, and ophthalmological systems has been reported. Symptoms include ataxia, hypotonia, developmental delay, conjunctivitis, skin rash and alopecia, seizures, hearing loss, breathing problems and optic atrophy. The expression of these symptoms is variable and may be related to dietary biotin intake and the degree of residual Biotinidase enzyme activity. If untreated, patients will develop metabolic ketoacidosis and organic aciduria. Most patients with Partial Biotinidase deficiency exhibit chiefly the cutaneous symptoms.

BTD-deficient patients are treated with lifelong daily oral doses of biotin 5–20 mg, independent of their age to compensate for its decreased bioavailability from food sources and increased urinary losses [37].

As biotinidase is synthesized in the liver [21] certain liver diseases can cause decreased synthesis of liver proteins or enzymes, including biotinidase, thereby reducing biotinidase activity in serum [40-44].

It has been shown previously that epileptic patients receiving a high average dose of anticonvulsants (valproic acid) have lower biotin concentrations than those receiving a low dose [46]. Liver function data were found to be elevated in the patients receiving low dose and high dose of valproic acid. On the other hand, biotinidase activity was significantly statistically lowered as compared with controls. It is suggested that VPA impairs the liver mitochondrial function, resulting in a low biotinidase activity and biotin deficiency. In our laboratory, we have investigated the effect of hepatotoxins on the plasma biotinidase activity in rats. We observed a marked decrease in the activity of biotinidase in the plasma of rats after single dose of carbon tetrachloride [47]. Liver fibrosis induced in rats by chronic exposure to carbon tetrachloride resulted in a significant decrease in plasma biotinidase activity, while the plasma albumin levels were normal [48,49].

Acute acetaminophen toxicity in rats results in increased plasma biotinidase activity. In the plasma of ethanol/ phenobarbital-treated rats as well as the ethanoltreated rats, albumin and the activity of biotinidase were decreased significantly as compared with the controls [50].

Paesold-Burda et al [53] reported increased biotinidase activity in patients with various glycogen storage disorders- GSD Ia, GSD I non-a, GSD III, GSD VI and GSD IX. The sensitivity of this test was 100% for patients with GSD Ia, GSD I non-a and GSD VI, 62% for GSD III, and 77% for GSD IX respectively. These authors propose serum biotinidase as a diagnostic biomarker for hepatic glycogen storage disorders. The reason why plasma BTD activity increases in GSDs patients or the clinical importance of the increment is not known.

Evidence suggests that biotin is also important in cell signaling, gene expression, and chromatin structure. It is suggested that biotin-dependent gene products play important role in signal transduction, gene expression, and cell proliferation and differentiation .More than 2000 human genes depend on biotin for expression. One such process is regulation of transcription factor NF-α -B, which is important in prevention of all death [58]. Evidence has been provided that expression of N-myc, cmyb, N-ras and raf oncogenes depends on biotin in small cell lung cancer cells [59].

Loss of biotinidase would subsequently cause a biotin deficient state which would in turn affect histone biotinylation in chromatin remodeling. Eleven distinct biotinylation sites in histones H2A, H3 and H4 have been identified (Figure 2). It is known that biotinylation of K12 in histone H4 is important for repair of DNA and heterochromatin structures as well as repression of genes and transposons to maintain genomic stability and reduce cancer risk in human cells and Drosophila melanogaster [18].

In the present review, the importance of biotinidase, consequences of its deficiency, and its implications in the diagnosis of cancer is reviewed. Serum biotinidase activity has been used as a marker of hepatic synthetic ability. Its activity is reported to be decreased in patients with acute or chronic liver damage as well as in rats with liver injury. Recent studies have suggested the usefulness of biotinidase in the diagnosis of cancers including breast cancer, papillary thyroid carcinoma and cervical cancer. Whether the loss of biotinidase plays a functional role or is associated with cancer remains to be investigated. Additional work in this area could shed crucial light on the role of biotinidase in cancers.