Brain tumor is a dreadful disease which occurs when abnormal cells form uncontrollably. The modality adopted to detect abnormalities is Magnetic Resonance Imaging (MRI). MRI brain images contain nonbrain tissues. One of the important preprocessing steps is the whole brain segmentation, the process of skull stripping which isolates brain tissue and non-brain tissue. Segmentation is tedious and consumes more time only well experienced radiologist or a clinical expert can perform it with best accuracy. In order to overcome these limitations, computer aided medical diagnosis is essential. In this work, an intelligent and a robust skull stripping algorithm using mathematical morphology suited for all types of MR sequences is proposed. The method was validated on the international database collected from whole brain Atlas. The performance was evaluated using the metrics Jaccard Similarity Coefficient (JSC), Dice Similarity Coefficient (DSC), False Positive Rate (FPR), False Negative Rate (FNR), sensitivity, specificity and accuracy. An average of 97.25% indicates better overlap between proposed skull stripping and manual stripping by radiologists as a gold standard. The simulation results proved high accuracy in comparison to the ground truth results which is evident from the similarity coefficient metrics.

Brain is the most complex structure of our human body. Grey matter consists of neuronal cell bodies, neurophil, glial cells, synapses and capillaries which is the major component of the central nervous system. White matter is made up of myelinated axons called tracts. Grey matter contains numerous cell bodies and has few myelinated axons. Brain is surrounded by tissue membrane called meninges which separates brain from skull. CSF is a colorless body fluid that exists in the brain and spinal cord. CSF acts as a cushion and provides immunological protection to the brain [1,2].

Computer aided medical diagnosis with various image processing techniques has increased the possibility of accurate prediction due to better visualization. Amongst the various tools, MRI (magnetic resonance image) is an effective imaging tool, to study the anatomical structure due to its high spatial resolution. Conventional MR sequences are T1-weighted, T2- weighted, and PD-weighted. T1-weighted has highest signal on fat tissue and hence better suited for showing anatomical structures. T2-weighted has highest signal in liquid and hence suited for detecting lesions. PD-weighted is suited for characterizing lesions by differentiating the contrast of the brain tissues [3]. MRI images brain in axial, coronal and sagittal planes. MRI scans can produce detailed pictures of organs, soft tissues, bone and other internal body structure [4,5].

Artifacts introduced during acquisition and undesired tissues affect the processing quality and lead to inaccurate diagnosis. Thus, an important preprocessing step is skull stripping where the brain tissue is segmented from the skull. Since the manual segmentation is very time consuming and prone to errors, various methods have been developed to automatically remove extra-cerebral tissues without human intervention. Morphometric studies require a preprocessing procedure to isolate the brain from extra-cranial known as skull stripping [6-9]. Skull stripping ensures better segmentation and assures accurate diagnosis of brain diseases and probability of misclassification of abnormal tissues is also reduced. Numerous skull stripping algorithms are available in the literature. Several studies are being carried out on the available skull stripping procedures and their performance is analysed on the standard research datasets. Every algorithm has its own merits and limitations. In this work, a robust skull stripping algorithm that is suited for all types of MR image sequences has been developed.

Atkins et al. [16] suggested template based method which separates brain and non-brain regions effectively. It varies with the type of templates used for separation and also on the application of atlases. Leung et al. [17] performed multi-atlas propagation by combining many segmentations performed by atlas registration.

Research database consists of 27 datasets of 6 patients with age between 35-71 with anaplastic astrocytoma, grade IVastrocytoma, low grade glioma, meningioma with T2- and PDweighted MR, metastatic carcinoma with T2-weighted MR and grade II- astrocytoma with T1-weighted MR collected from the whole brain atlas-Harvard Medical school database (http:// med.harvard.edu/aanlib\) is used to validate the proposed skull stripping algorithm. The RGB image is converted into grayscale before processing. All of the images had 256 × 256 pixels acquisition matrices, and 2 slices from each patient was collected. The imaging protocol used a 3 T MRI scanner with slice thickness of 1 or 3 mm. The standard slice orientation of trans-axial is considered. Figure 1 represents the complete set of database acquired. 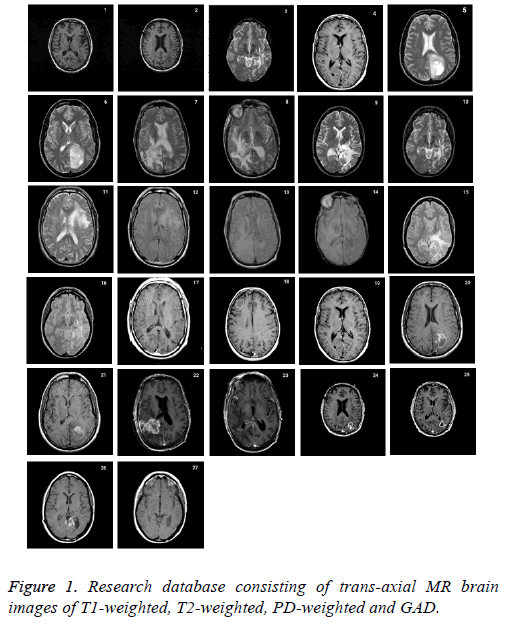 To analyse geometrical structures such as size, shape, connectivity, mathematical morphology is a tool used which is based on set theory. It was developed originally for binary images but can be used for grayscale and color images. It is a collaborative work of Georges et al. at the École des Mines de Paris, France. The procedure is to search the image at different locations with a pre-defined shape and to decide as how this shape fits or misses the shapes in the image. This is called the structuring element, and it is also a binary image. Choice of size and shape of structuring element is need based. Diamond, square, disc, horizontal line, vertical line, cross etc. are the most commonly used structuring element, erosion and dilation are the two essential operations in mathematical morphology. Other operations like opening and closing can be derived from it.

Dilation of I by the structuring element S is denoted by I ⊕ S. I overlaps by at least one element. Dilation performs thickening of an image. It highlights small objects in the image.

Closing operation denoted by I • S smoothens the contours. It eliminates discontinuity and small gaps between the objects. In closing operation, dilation is performed followed by erosion. 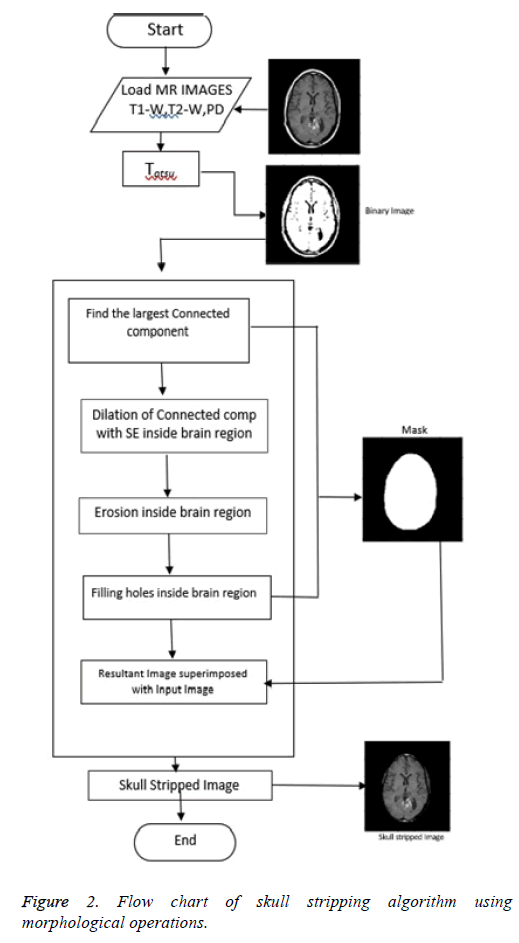 Step 1: Conversion to binary image: The input image is converted to binary image with Otsu’s thresholding [24]. Otsu's method automatically performs reduction of a gray level image to a binary image. The algorithm considers the image as two classes of pixels, foreground pixels and background pixels. Optimum threshold is obtained which separates the two classes so that their intra-class variance is minimal and their inter-class variance is maximal.

Step 2: Creation of mask: Brain is the largest connected component. This component is extracted from the binary image. Dilation and erosion operations are performed to preserve the minute features of the brain in the resultant image. By filling the holes, the brain becomes a complete connected component.

Step 3: Superimposition: The final skull stripped image is obtained by superimposing the mask on the input image.

Skull stripping is a challenging pre-processing step in tumor characterization due to intrinsically imprecise nature of brain image. It helps to remove the skull from the input image. The performance of the proposed approach is compared with ground truth which is a manual stripping by a well experienced radiologist considered as gold standard. Figure 3 shows the results of the proposed skull stripping algorithm for different MR brain image sequences. The algorithm is carried out by using Matlab tool kit. 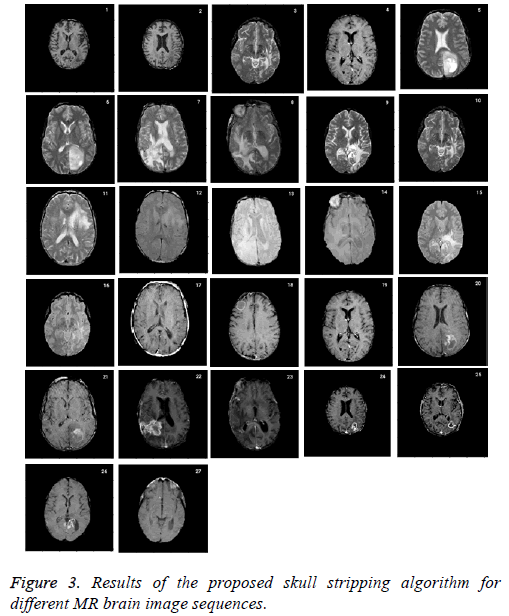 DSC is used to describe the overall level of similarity between proposed skull-stripped algorithm and ground truth. DSC has been calculated according to the following equation

False positive rate (FPR) and false negative rate (FNR) were used to quantify over and under segmentation. Both FPR and FNR were calculated according to

A direct relation between JSC, FPR, and FNR is according to the following expression:

The performance metrics evaluated for the proposed skull stripping algorithm is given in Table 2. The proposed method is robust and hence successfully strips the skull for all types of brain image sequences. Average performance using dice coefficient is 97.25% and using Jaccard coefficient is 94.87% which illustrates that highest similarity or overlap between the skull stripping algorithm proposed and the ground truth.

Skull stripping being a preliminary step, its accuracy is a key factor. Most of the methods suggested in literature cannot be applied for all brain image sequences and orientations. In this paper, an intelligent skull stripping algorithm that works well for all types of MR Image sequences such as T1, T2, PD, and GAD is proposed. Experimental results confirm the efficacy of the proposed algorithm. Moreover comparison with ground truth showed that the proposed approach is promising in obtaining high performance metrics.