This study aimed to observe the impact of Triamcinolone (TRI) on distal articular cartilage in rabbits subjected to Lumbosacral Plexus Nerve Block (LBPNB). A total of 32 New Zealand white rabbits were randomly divided into four groups: A1, 2.5 ml × 2 times; A2, 2.5 ml × 4 times; B1, 5 ml × 2 times; and B2, 5 ml × 4 times. The interval among these treatments was 5 d. Structural changes in Hip Articular Cartilage (HAA) were observed using an electron microscope, and flow cytometry was performed to detect the number of apoptotic cells for verification. Lower-limb muscle strength in these four groups was maintained at grades II-III after LBPNB; the electron microscopy results revealed that the HAA structures and development degrees in these four groups did not differ significantly, and the flow cytometry results were consistent with the electron microscopy results. Short-term (up to 20 d) intermittent (up to 4 times) Nerve Block (NB) combined with TRI (doses up to 10 mg) had no impact on hip cartilage cells.

Pain may affect one’s daily life by limiting range of motion, strength, and functional recovery. Regional anesthesia for peripheral nerve stem or plexus, called a Nerve Block (NB), has been widely used as an effective diagnostic and therapeutic tool [1], especially in the management of acute or chronic pain [2]. When considering the use of NB for chronic pain, clinicians must always consider the indications, risks, benefits, and proper techniques, such as epidural steroid injections, radiofrequency ablations, and sympathetic nerve neurolysis [3] to provide maximal benefits for patients.

NB is a more conservative approach than surgery is, when the latter is not indicated or as a palliative bridge to surgery. For example, the superior ability of Suprascapular Nerve Block (SSNB) to relieve chronic shoulder pain was demonstrated in a meta-analysis of placebo and physical therapies [4], and many studies of steroid injections in patients with herniated discs, radiculopathy, and stenosis as well as with myofascial pain of masseteric origin reported significant benefits in pain scores, walking tolerance, and standing [5-7].

Steroid prescription selection and injection placement accuracy were identified as factors that would affect the treatment outcomes [8,9]. However, considering repeated steroid injection, the main concerns should be the amount of total steroid dose injected and the possibility of causing adrenal suppression and affecting bone reabsorption [10]. At the same time, the impacts of NB on distal articular cartilages have not yet been reported, but clinical experience had shown that the addition of Triamcinolone (TRI) during NB exhibited good effects. Axoplasmic motion occurs inside the nerves, and it has not been reported whether this motion would transport glucocorticoids to the distal end of the articular cartilage to impact or even destroy the articular cartilage. The study used electron microscopy and flow cytometry to observe the impacts of different TRI doses and times on HAA.

This study was carried out in strict accordance with the recommendations in the Guide for the Care and Use of Laboratory Animals [11]. The animal use protocol has been reviewed and approved by the Institutional Animal Care and Use Committee (IACUC) of Guizhou Provincial Orthopaedic Hospital.

Pre-experiment: First, the waist fur was shaved off in three rabbits, which were then fixed in the lateral position. After the puncture site was confirmed (1.5 cm from the spinous process of the ileospinal connection), one needle was injected 2-2.5 cm deep; it broke the intertransverse ligament, and then entered the intergroove of the greater psoas muscle. After the positioning was accurately confirmed via radiography, 1 ml of iohexol was injected. The distribution of the contrast agent along the intergroove of the greater psoas muscle was then examined on Computed Tomography (CT) and the depths were recorded. Another three rabbits underwent localization using the same method, and the depth referred to the average depth obtained in the first step, during which the feeling of breakthrough should be noted; thereafter 2.5 ml and 5.0 ml of methylene blue were injected, and the rabbits were anesthetized with propofol. The rabbits were then anatomized for inspection of the location and distribution of methylene blue, which should be confirmed within the intergroove of the greater psoas muscle, and the distributions of the lumbosacral plexus nerves should be seen to confirm that the two methods had consistent localization results.

Each rabbit’s lower-limb muscle strength was observed, graded, and recorded according to the muscle strength gradation of humans; the morphological changes in HAA in each group were also observed by electron microscopy. Meanwhile, to further observe whether articular chondrocytes react to steroid therapy, flow cytometry was performed to detect the apoptosis of articular chondrocytes in each group to supplement the morphological observation results.

Electron microscopy revealed no significant difference in HAA among the four groups as shown in Figures 1-5. 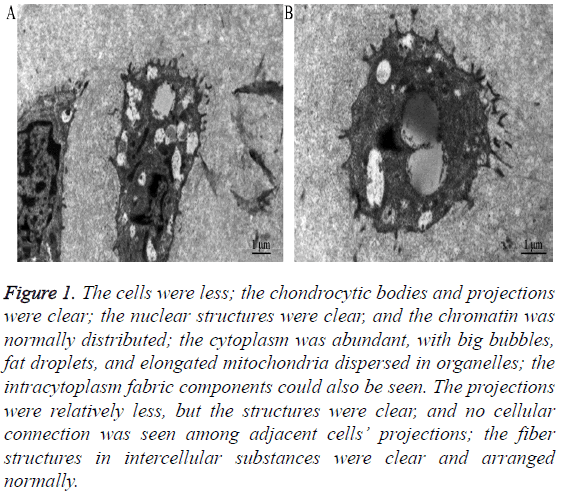 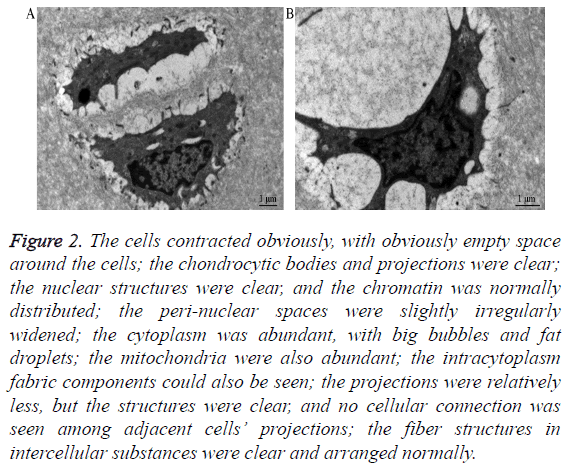 Figure 2: The cells contracted obviously, with obviously empty space around the cells; the chondrocytic bodies and projections were clear; the nuclear structures were clear, and the chromatin was normally distributed; the peri-nuclear spaces were slightly irregularly widened; the cytoplasm was abundant, with big bubbles and fat droplets; the mitochondria were also abundant; the intracytoplasm fabric components could also be seen; the projections were relatively less, but the structures were clear, and no cellular connection was seen among adjacent cells’ projections; the fiber structures in intercellular substances were clear and arranged normally. 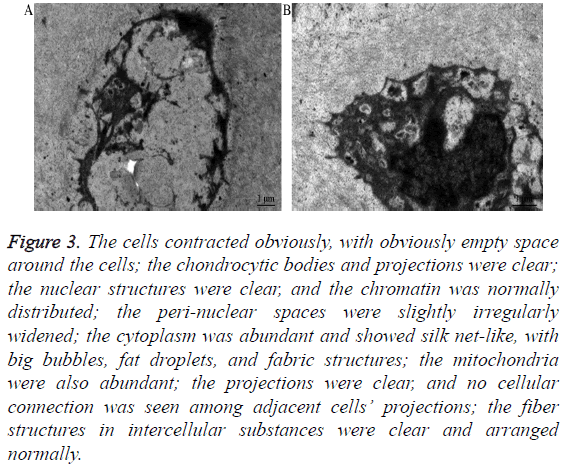 Figure 3: The cells contracted obviously, with obviously empty space around the cells; the chondrocytic bodies and projections were clear; the nuclear structures were clear, and the chromatin was normally distributed; the peri-nuclear spaces were slightly irregularly widened; the cytoplasm was abundant and showed silk net-like, with big bubbles, fat droplets, and fabric structures; the mitochondria were also abundant; the projections were clear, and no cellular connection was seen among adjacent cells’ projections; the fiber structures in intercellular substances were clear and arranged normally. 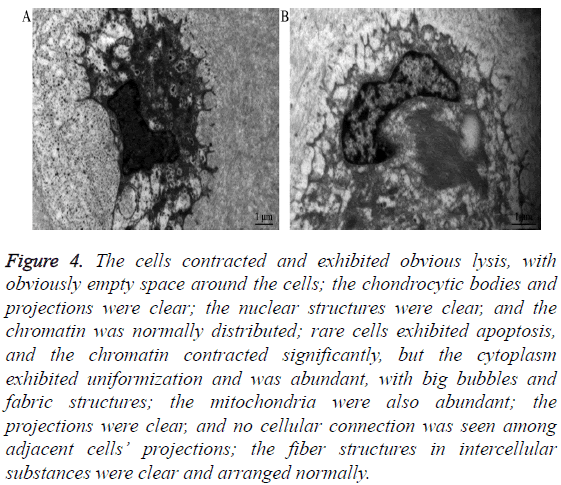 Figure 4: The cells contracted and exhibited obvious lysis, with obviously empty space around the cells; the chondrocytic bodies and projections were clear; the nuclear structures were clear, and the chromatin was normally distributed; rare cells exhibited apoptosis, and the chromatin contracted significantly, but the cytoplasm exhibited uniformization and was abundant, with big bubbles and fabric structures; the mitochondria were also abundant; the projections were clear, and no cellular connection was seen among adjacent cells’ projections; the fiber structures in intercellular substances were clear and arranged normally. 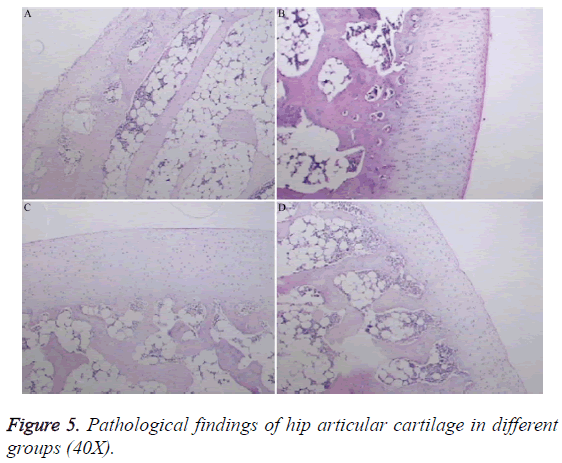 Epidural steroid injections and lumbar nerve root block/steroid injections are commonly administered interventional treatments for spine-related pain [12]. Several studies have presented evidence that blocking peripheral nerves effectively treats some neuralgias and could reduce pain frequency, intensity, and duration [13]. In this study, we found that the lidocaine injection led to nerve anesthesia, and because the simultaneous injection of steroids could relieve inflammation and treat pain, the outcomes could be better than those of lidocaine alone. The mechanisms underlining this were considered related with the fact that hormones could regulate the peripheral nerve microenvironment, reduce the inflammation and edema at the lesions, and promote the absorption of inflammatory mediators. The mechanisms of the effect of NB on chronic pain lay in blocking the vicious pain cycle, suppressing the central sensitization, simultaneously improving blood circulation, and promoting the absorption of inflammatory mediators; NB could also relieve muscle spasms and improve muscle nutrition [14,15].

Steroid injection therapies are frequently used in chronic pain treatment since the signs and symptoms of inflammation can be rapidly and effectively controlled [16] by reducing the inflammation around the nerve roots, which contributes to pain [17].

For example, the addition of perineural dexamethasone to local anesthetic solutions could significantly improve postoperative pain control in brachial plexus block but not increase the complications in a system analysis, and smaller doses of dexamethasone (4-5 mg) were as effective as higher doses (8-10 mg) [18], but the volume of local anesthetic varied widely from 5 ml to 10 ml in recent studies [19,20] and even up to 20 ml [21]. In fact, after consideration of human and rabbit weights, the volume we used in our study might have exceeded 20 ml, so smaller doses of TRI and shorter therapy durations might be as effective as higher doses and longer therapy durations; however, future studies are required to confirm our findings.

A meta-analysis that included peripheral nerve blockade in 29 controlled trials of 1695 participants confirmed that dexamethasone could increase the mean duration of analgesia in anesthetics acting locally [22], which verified the effectiveness of nerve blocks using an anesthetic and a steroid.

However, safety concerns have always been considered in NB because spinal cord injuries are also known to occur with interventions such as epidural steroid infiltrations [23], and only one study showed that TRI induced chondrotoxicity in chondrocytes in vivo [24]. Some studies also found that corticosteroids have a time- and dose-dependent effect on articular cartilage, with beneficial effects occurring at low doses and durations and detrimental effects occurring at high doses and durations [25,26]. Since TRI was used in the NB, the concentrations were very low, which may be the reason for the lack of intergroup differences, which might explain why shortterm steroid use had no effect in the articular cartilage.

This study was performed in rabbits, which are different from humans. We may find structural changes in patients who undergo hip replacement surgery in the future.

There were no structural changes in hip cartilage cells in the lumbosacral plexus nerve block based on different triamcinolone doses and durations.

This work was funded by Projects of Guizhou Science and Technology Department, (No. QKHLS (2012) 051).