Objective: To study the effect of sevofluranein on the developmental hippocampal neurons of rats and the possible mechanism.

Conclusion: The effect of sevoflurane on hippocampal neurons in vitro is bidirectional which may be related to the time through the BDNF-TrkB pathway.

In America, approximately 6 million children, including newborns, undergo general anaesthesia each year [1]. In China, this number is much more. The effects of general anaesthesia drugs on children have become one of the most watched issues. In previous reports, anaesthetics have neuroprotective effects on new-borns [2]. However, the cytotoxic effects of neonatal anaesthesia have also been mentioned in a large number of studies [3]. Multiple studies demonstrated that anaesthetics induce neurotoxicity in the developing brain [4,5]. Long-term exposure to sevoflurane causes neurologic disorders in infants and the developing brain [6]. In animal, general anaesthetics caused neurological and cognitive deficits in rodents [7-9].

Volatile anaesthetics such as isoflurane, desflurane, sevoflurane, due to the rapid onset and short recovery time, have been commonly used in neonates and infants. Sevoflurane is a commonly used inhaled aesthetic, which provided amnesia, unconsciousness, and immobility by interfering with γ- aminobutyric acid receptor sub-type A, N-methyl-D-aspartate acid receptor, and glycine receptor [10].

Brain-derived neurotrophic factor (BDNF) is a member of the neurotrophin family of growth factors, which are related to the canonical nerve growth factor and active in the hippocampus, cortex, basal forebrain-areas vital to learning, memory, and higher thinking [11]. The activation of the BDNF-TrkB pathway is important in the development of short term memory and the growth of neurons. At present, a study presents that the 6th day rats were exposed to 3% sevoflurane every day for 3 times, showing degeneration of neurons and abnormal cognitive function [12].

Based on the above result, we try to investigate the effect of sevofluranein on the hippocampal neurons from 24 h-old rats and confirm whether it is related to the BDNF-TrkB pathway.

This study protocol was approved by the Ethics Committee of Hebei Medical University, and the experiment was performed in accordance with the Guidelines for the Care and Use of Laboratory Animals from the National institutes of Health, USA. Within 24 h-old Sprague-Dawley (SD) rats (4.0-6.5 g) were purchased from the Hebei Medical University Laboratory Animal Company (No:1408088).

According to the literature method [13], hippocampal tissue was dissected from rat stripping the veins and membranes and removed into papaya enzyme for 30 min at 37°C with 5% CO2. Then the tissue mass was immigrated into DMEM containing 10% serum for ending digestion twice (2 min per time). After sieved, the isolated cells were seeded at 1 × 106 cells/ml cell suspension, transferred to 24 well plates coated with Matrigel basement membrane (500 μl per well), cultured at 37°C with 5% CO2 . Six h later, medium was changed to serum-free neurobasal medium totally, and then the medium was renewed half quantity every 2 days during the culture process.

After 12 h, hippocampal neurons were moved back to medium for continuous culture. Medium samples were randomly collected for pH measure and corrected according to the PH of CG. Cultured for 24 h, hippocampal neurons were randomly selected for vision pictures, and 5 pictures were taken and analysed with Motic Med 6.0. The average neurite length in the field was measured as a statistical index.

For protein extraction, hippocampal neurons were washed twice with PBS and lysed in appropriate amounts of radio immune-precipitation assay (RIPA) buffer. Protein was determined using bicinchoninic acid (BCA) method according to the instructions of BCA test kit. Equal amounts of protein were denatured and separated on 10% SDS-PAGE gels, and transferred onto polyvinylidene difluoride membranes (PVDF) (Bio-Rad, Hercules, CA) membranes at 100 V for 2 h.

After blocking with skim milk (5%), proteins were incubated with respective primary antibodies in blocking solution at 4°C overnight: anti-BDNF (1:100, Abcam) and anti-TrkB (1:100, Affinity). Primary antibody binding was detected with antimouse or rabbit secondary antibodies (1:5000) and visualized with enhanced chemiluminescence. Immunoreactive bands were photographed using Chemi Scope Capture, and relative band densities for various proteins were measured from the scanned films with Gel Image Analysis V2.02. β-actin was used as a loading control.

Compared with the control group, significantly decreased protein expression of BDNF and TrkB was observed after treatment with sevoflurane for 6 and 12 h (P<0.05, Figure 1); while sevoflurane exposure for 3 h with increased protein expression of BDNF and TrkB in S3 group (P<0.05, Figure 1). Gray value of reference β-actin band in each group showed no significant difference (P>0.05). 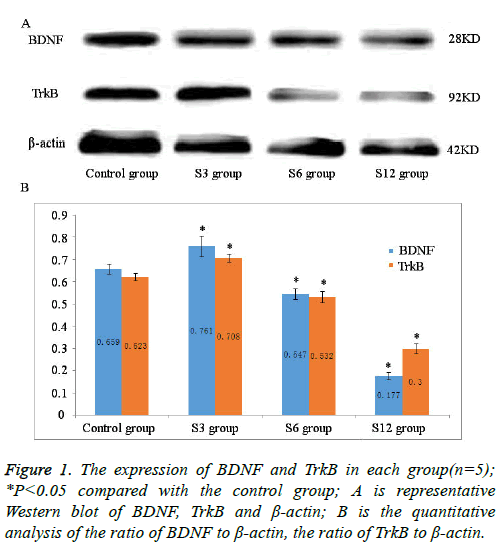 Figure 1: The expression of BDNF and TrkB in each group(n=5); *P<0.05 compared with the control group; A is representative Western blot of BDNF, TrkB and β-actin; B is the quantitative analysis of the ratio of BDNF to β-actin, the ratio of TrkB to β-actin.

Sevoflurane was first discovered by Ross Terrell, which was synthesized by Regan in 1968 and completed phase-III clinical trials in 1986. In recent years; many famous anaesthesiology experts sew it as milepost type drug in inhalation anaesthesia. Multiple studies have demonstrated that sevoflurane is very helpful for reducing perioperative mortality [14]. However, this study showed that sevoflurane exposure for 6 or 12 h induced significant and persistent decrease of average neurite length and MOD. And, no significant effect was found between 0 and 3 h in these parameters. To a certain extent, these findings demonstrated that sevoflurane exposure beyond 6 h induces destruction of neuronal development and confirmed that 1 MAC sevoflurane could cause apoptosis in developing hippocampus neurons, altering their development in a timedependent manner.

It is well known that the nervous system of human is rapidly developed in the middle of pregnancy (18 weeks) until 2 years after birth [15]. In this period, if affected by external factors, the nervous system is easy to be damaged or destructed. The rats were often used to study in basic research. For the differences among species, the nervous system of rats was rapidly developed at 0-25th day after birth. Thus, this study chose 24 h-old rat and 6 days hippocampal neurons cultured in vitro as investigated object. The hippocampal neuron in this period is very close to the rapid development of the human brain, which is most sensitive and vulnerable to external stimuli such as anaesthetics [16].

A large number of studies suggested that a large proportion of interneurons are cleared by apoptosis during synapse formation in the central nervous system [17]. Some scholars believed that in the development of the nervous system, excessive apoptosis of nerve cells also affects the development of the central nervous system [18]. When apoptotic neurons were found in the dentate gyrus and hippocampus, apoptosis may affect their physiological functions, including learning and memory [19]. Indeed, it has previously been reported that inhalational anaesthetics, such as isoflurane and sevoflurane, caused neurological disorders in rats and mice [20], which was in line with our result. Although 6 h of primary neurons culture, if converted into exposure time in paediatric patients will be very long, the clinical dose of sevoflurane in children, especially infants, may cause security risks in clinical anaesthesia in the relevant people.

In the past several decades, neuroscientists have found many possible mechanisms for inhalational anaesthesia-induced apoptosis of hippocampal neurons. Recent reports suggested that NMDA receptor antagonists, GABA receptor agonists, and BDNF could affect the development of hippocampal neurons [21]. However, the mechanisms of sevoflurane-induced discrepant effects in developmental hippocampal neurons are currently unknown. BDNF is a protein related to neuronal survival, differentiation, and several forms of synaptic plasticity in the immature brain. On the other hand, BDNF is a curial regulator of neuronal survival and neuroplasticity in the brain [22]. TrkB is a receptor for brain-derived neurotrophic factors. BDNF binds TrkB, regulating neuronal development and plasticity, long-term potentiation, and apoptosis [23]. Meanwhile, BDNF-TrkB activates serine/threonine-specific protein kinase (Akt), promoting neuronal survival [24]. Thus, the BDNF-TrkB pathway via PI3K/Akt regulates neuronal development. BNDF-TrkB pathway has been found to be important for long-term potentiation in the hippocampus [25], hippocampal memory consolidation [26], and normal morphology of neurons [27]. We firstly found that anaesthesia with 1 MAC sevoflurane for 3 h increased BDNF and TrkB protein expression. These findings indicated that single exposure to 1 MAC sevoflurane might enhance activation of the BDNF-TrkB pathway. However, anesthesia with 1 MAC sevoflurane for 6 h resulted in reduced levels of BDNF and TrkB. These findings suggested that single (6 h) exposure to sevoflurane inhibited the BDNF-TrkB pathway. Taken together, the current data indicated potential dual effects of sevoflurane on the BDNF-TrkB pathway.

The effect of sevoflurane on hippocampal neurons in vitro is bidirectional which may be related to the time. Exposure to 1 MAC sevoflurane for3h, it showed a neuroprotective effect on hippocampal neurons, whereas the time is longer for 6 h, it showed a neurotoxicity effect. And this result was related to the change of BDNF and TrkB protein expression, which was also called BDNF-TrkB pathway.