Aesthetic characteristics of the orthodontic wire with silver plating

Materials and Methods: A silver-plated wire that we have developed and six brands of esthetic arch wires were assessed. These wires were measured three times using a colorimeter color system 1. Lightness (L*), 2. Hue (a* • b*), 3. Chroma (C*), were evaluated. The colors of these wires need to be compared with the natural tooth color. VITA shade A1 (VA1) as evaluation criteria was measured.

Discussion: The silver-plated wire was closest to the natural tooth color, lightness, chroma, hue. In the future, we are working on development of a more aesthetic wire.

Wires used in orthodontic appliances are coated using different methods including the sputtering, plating, and printing methods. Among these methods, we focused on the electroplating method in this study. Electroplating is a process that uses an electric current to reduce dissolved metal cations so that they form a coherent and uniform coating on an electrode [5]. Silver is known to show superior performance in reproducing white color in arch wires during electroplating [6]. The plating is used widely at present, most of which are alloy plating. The alloy plating can get various kinds of favorable colors depending on the composition, and its application range as the decoration plating is very wide. In addition, there is corrosion resistance plating, wear resistant plating, and plating for soldering by being easy to melt [7]. Alloy plating is precipitated at the same time with two or more kinds of metals and non-metals in the electroplating or other methods to make the alloy coating film. We used an electroplating treatment. Electroplating method can be applied to a substrate of complex shape, and it is possible to perform mass production. Electroplating treatment is the method that the metal ions in the plating bath is deposited on the target metal surface as a metal atom, and formed a crystal lattice by diffusing its surface.

In the present study, we focus on the difference in color between an archwire and a natural tooth, as it is one of the aesthetic issues associated with orthodontic devices, as described above. Therefore, the aim of this study is to develop aesthetic orthodontic arch wires by using silver electroplating. The color of the aesthetic arch wires is assessed using a devised colorimetric measurement method, which will be described later.

Typical alloy plating which can provide aesthetic properties to the metal are Silver alloy, gold, rhodium, platinum, and palladium alloy. In them, silver alloy can be brought close to the appearance to the natural color of teeth by adjusting the alloy composition. The method is plating treatment. Silver plating wire was created by the electroplating process. The film thickness was set to 5 μm. It can be seen that silver plating wire is nearly the same dimension of non-coated stainless steel wire. Thus silver plating wire was created based on non-coated stainless steel wire while keeping its dimension. We developed a silver-plated wire and assessed its performance in reproducing a white color in arch wires by comparing it with six brands of aesthetic arch wires in the present study. The brands or wire names, cross-sectional sizes, compositions, and coating surfaces are listed in Table 1, as described by the manufacturers (examples shown in Figure 1). 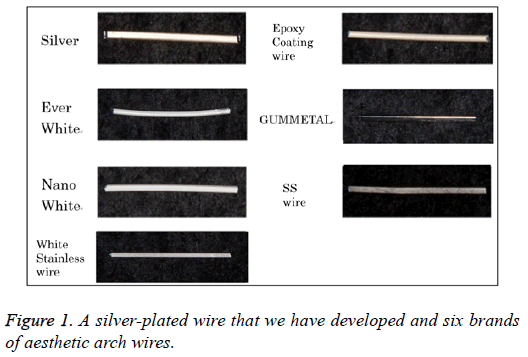 Figure 1: A silver-plated wire that we have developed and six brands of aesthetic arch wires.

In order to measure arch wires with small diameters and accurately determine their color using colorimetry, samples having minimum widths of 3 mm are required. Therefore, in the present study, the technique described by da Silva et al. was used with slight modifications [9]. Six wire segments were fixed tightly at both ends by using utility wax, as shown in Figure 2, and the colorimeter (Shade eye, Shofu, Kyoto, Japan) used in this study is shown in Figure 3. Colorimetric measurements were performed by contacting the measurement tip of the optical sensor to the sample. To measure the reference white color, the instrument tip was placed perpendicular to and in complete contact with the labial surface of the tooth [10]. Measurement values were obtained by averaging the values of the wire samples and VA1; all of which were measured three times. Color parameters were expressed using the Commission International de l’Eclairage (CIE) L*a*b* color space system. As the assessment of visual color is subjective, quantitative color systems with rectangular coordinates that allow an objective assessment of visual color were used in the present study. The three axes in this threedimensional color space were L*, a*, and b*. The L*-axis denotes the brightness, which increases as the value of L* increases. The value of a* represents the degree of redness (+a*) or greenness (-a*) of an object. The value of b* represents the degree of yellowness (+b*) or blueness (-b*) of an object. The value of C*, which represents the vividness of color, is calculated using C*=((a*)2+(b*)2)1/2 [11]. The color difference between VA1 and each wire (ΔE*ab) was calculated according to 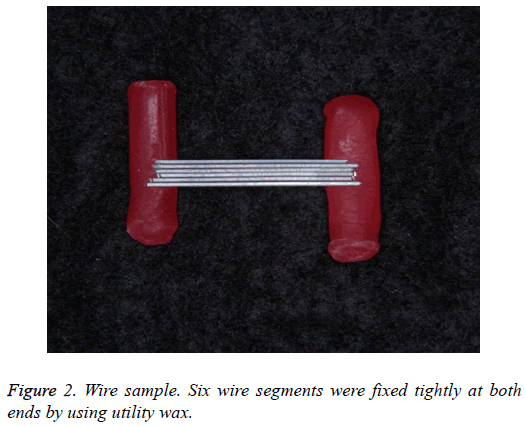 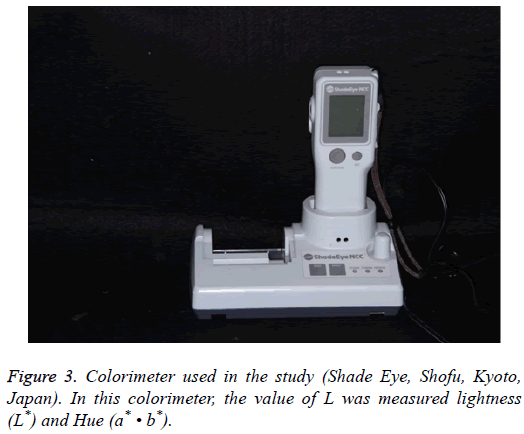 Figure 3: Colorimeter used in the study (Shade Eye, Shofu, Kyoto, Japan). In this colorimeter, the value of L was measured lightness (L*) and Hue (a* • b*).

Furthermore, in order to relate the extent of color difference to a clinical environment, the data were converted to National Bureau of Standards (NBS) units by using the following formula: NBS units=ΔE*ab × 0.92. The definition of color changes quantified by NBS units was used [12] (Table 2).

Table 2: Color differences according to the National Bureau Standards.

We examined the experimental results by using an analysis of variance and Tukey Kramer’s multiple comparison tests in order to identify differences among the different values with the significance level set at p=0.01.

A chromaticity diagram is shown in Figure 4A; the diagram does not display the value of L* because it is a twodimensional diagram. The blue dot at the center of the figure denotes the value of VA1. The red-green hue (a*) of epoxy coating wire was the closest to VA1, followed by Nano White and the silver-plated wire, respectively. Three-dimensional color spaces are shown in Figure 4B. In this figure, the coordinates of the seven wire samples and VA1 are displayed. The 3D figure shows that the wire samples of similar color to VA1 are Silver, Ever White, and epoxy coating wire. Color differences (ΔE*ab) were observed between the wire samples; the values of VA1 and NBS were also different (Table 4). The color differences represent numerical differences between two colors. The color differences were calculated using a color difference formula that corrects differences between measured values and visual evaluations, i.e., a weakness of the L*a*b* color system. Weighting (SL, SC, and SH) and parametric (KL, KC, and KH) coefficients were corrected based on the differences in brightness (ΔL*), chroma (ΔC*), and hue (ΔH*). A low value indicates a low color difference from VA1. ΔE*ab values for Silver were significantly lower than other groups (0.01>p) (Table 4). The NBS values for Silver were significantly lower than other groups (0.01>p) (Table 4). 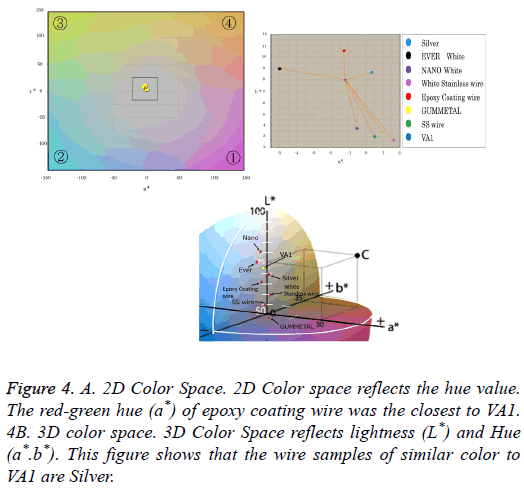 Interest in color research in the field of dentistry has increased significantly over the past several decades [13]. Silver-plated wires are considered to approximate the color of natural teeth. Silver easily reproduces a particularly brilliant white color in electroplating. In the present study, silver was used as the reference color for natural teeth. Therefore, if the coating color was too dark or too bright, it contrasted with natural teeth. Therefore, in this study, we developed an arch wire by using the electroplating method.

Hue (a*, b*) may be determined to some extent even when wires are coated with white. The hue of the wires were measured in this experiment, with the minimum and maximum values of a*-excluding the Ever White and whitestainlesswirebeing -5 and 1.6, respectively. The maximum and minimum values of b* were 10.6 and 2.7, respectively. Hue (a*, b*) is considered to a certain extent while reproducing a white color in arch wires. However, the minimum and maximum values of lightness were 60.9 and 81.1, respectively. Among the values measured in this experiment, the value of L* is considered to markedly influence color difference, as the formula to calculate color difference is given by ΔE*ab=((ΔL*)2+(Δa*)2+(Δb*)2)1/2 [15]. Therefore, the lightness (L*) is most important for reducing color differences with respect to VA1.

We did not perform a subjective assessment by self-perception in the present study. Gerlach [16,17] investigated the selfperception of tooth whitening by bleaching and compared the results with objective measurements of changes in tooth color in a study using 50 subjects. The subjective assessment by selfperception with regard to tooth whitening was investigated by distributing a questionnaire among the subjects, and changes in tooth color were objectively measured using a digital image analysis system. The data were fitted into a probability model, and the obtained findings revealed that subjective responses to improvements in whiteness and satisfaction correlated with changes in the yellow-blue hue (b*) but not the lightness (L*) or red-green hue (a*). Thus, Db* (reduction in yellowness) is of primary perceptual importance to users of vital tooth bleaching products [18].

The color properties of wires and teeth are important for enabling orthodontists to achieve better results in aesthetics. The color of teeth differs for different patients. Previous studies measured the color of the maxillary central incisors of subjects. The obtained findings showed that the color parameters (L*, a*, b*) of natural teeth in subjects ranged from 51.1 to 73 for L*, from -0.9 to 5.4 for a*, and from -0.2 to 18.7 for b* [19-23]. Orthodontists need to carefully evaluate color especially that of the maxillary anterior teeth, prior to installing aesthetic wires because they are the most visible. This study only measured the color of wires compared to a single reference. In clinical practice, the harmonization of color for arch wires and brackets used for teeth is important in order to achieve the best aesthetics.

In the present study, we investigated silver-plated wire. The value of color difference between VA1 and the wire, ΔE*ab, was 2.3, which was the closest to the color of teeth. In NBS units, the color difference between the silver-plated wire and VA1 was “perceptible”. This value was the smallest among all the wires examined. However, in order to approximate tooth color, it is desirable for the value to be between 0 and 1.5 in terms of NBS units. In the statistical analysis, the values of ΔE*ab of the silver-plated wire were compared with those of six different brands of arch wires, and these values were approximately equal to the values of ΔE*ab for tooth color. This result shows that the silver-plated wire that we have developed is aesthetically more pleasing than the other wires examined. Based on the results of the present study, silver appears to be the most aesthetic coating material for orthodontic wires.

The authors have no conflicts of interest relevant to this article.