The aim of this study was to evaluate the VO2max, peak blood lactate and peak heart rate among wheelchair basketball and rugby players. Thirty-eight wheelchair basketball and rugby players were purposively selected based on the following criteria: aged 18-50 years, actively involved in a wheelchair sport for at least one year prior to the study and had at least a minimum of 10% loss of function in the lower extremities. Results indicated that the paraplegics had a higher absolute peak VO2 when compared with the quadriplegic groups. When percentage differences were compared, it was evident that the “other” group (34%) and the paraplegic group (27%) were above the average group mean (1564.3 m?/min-1), whilst the other two groups were (21% and 15%) below the group mean, respectively. The results of the study have practical implications for players’ health and sport performance. It is important that athletes suffering from spinal cord injury or any other type of physical impairment establish some type of anaerobic/aerobic fitness specific to their sport. For disabled athletes, sport participation is imperative for optimising their health, functional ability and physical performance.

Wheelchair basketball is played by athletes who have a physical disability that prevents running, jumping and pivoting, such as paraplegia, amputations, or joint and musculoskeletal conditions [1]. On the other hand, wheelchair rugby is played by individuals who have a disability which affects the normal functioning of the arms and legs [2]. Previous studies [3-5] have shown that aerobic endurance fitness is important for wheelchair games’ players. VO2max (aerobic capacity) is an attribute required for success in endurance-related events [6]. Data on aerobic fitness of wheelchair players have been reported in the literature [3,5]. However, there appeared to be differences in the VO2max of athletes in terms of gender, age, type of disability, and sports. For instance, a study by Bhambhani, Holland, Erickson and Steadward [7] investigated physiological responses during wheelchair racing in which quadriplegics were compared to paraplegics. Bhambani et al. [7] found the peak values of VO2, and HR obtained during incremental velocity wheelchair exercises tended to be significantly higher in paraplegics than quadriplegics. The authors did not find any significant differences between these groups for oxygen pulse (oxygen utilisation per heart beat). However, another study by Eriksson, Lofstrom and Ekblom [8], found aerobic power during maximal exercise in trained and untrained quadriplegics and paraplegics. A significant difference was found in which a 38% increase in peak VO2 was noted in the trained athletes. They concluded that peak VO2 values in well trained quadriplegic athletes were comparable to those of untrained paraplegics with a low-level injury and that physical training could largely reduce the differences in aerobic capacity between quadriplegics and paraplegics [8]. In the study conducted by Mclean, Jones and Skinner [9], 11 individuals with quadriplegia were tested of which six were classified as high-level quadriplegics (lesion at C7 and above) and five, low-level quadriplegics (lesion from C7 and below) and found peak power output, VO2 and ventilation to be 16%, 15% and 18% higher in the supine position. According to McLean et al. [9], another possibility for the increased peak VO2 in the supine position was the gravitational pull on the abdominal contents which could not be opposed by contraction of the paralysed abdominal musculature. During wheelchair ergometry, Huonker et al. [10] reported that the peak VO2 in able-bodied individuals was 32% higher than that of untrained individuals with paraplegia but 10% lower than that found in trained athletes with paraplegia. The oxygen pulse was lower in the untrained individuals with paraplegia by 20%, with no difference observed between the able-bodied individuals and the athletes with paraplegia.

To our knowledge, there is hardly any study that has assessed peak VO2 among physically impaired athletes with a wheelchair ergometer. Therefore, this study was primarily conducted to examine the VO2max among wheelchair basketball and rugby players. It was also of interest to the study to assess the players’ peak blood lactate and peak HR as predictors of peak fitness.

The sample of this study consisted of 38 purposively selected male basketball and rugby wheel chair players. The participants were categorized according to their physical disabilities as follows: 13 polio (34 %), 8 paraplegics (21 %), 8 quadriplegics (21 %) and 9 others (24 %). Participants were chosen based on the following criteria: aged between 18-50 years, actively involved in a wheelchair sport for at least a year before the study and had at least a minimum of 10% loss of functional ability in the lower extremities.

Prior to data collection, permission to carry out the study was granted by the Tshwane University of Technology Higher Degree Ethics Committee. All the athletes were fully informed about the risks associated with the project and signed an informed consent form. Due to the nature of the athletes being tested, they were all fully screened by a physician prior to the study. Peak VO2 testing was done in the human performance laboratory at Tshwane University of Technology under supervision of the lead author and his co-supervisors.

The ergometer was calibrated with special weights before each peak VO2 test was performed. An electronic display board was placed in front of the participant when he was seated in the ergometer. This electronic board displayed the athletes’ heart rate and propulsion velocity measured in revolutions per minute. Once the athlete was seated in the wheelchair ergometer, he was strapped in to assure stability, and also to prevent him from generating power from the pelvis area rather than from the upper body.

The following protocol was used during the testing:

• the players were required to propel at a constant speed of 32-RPM throughout the test;

• a warm-up set of three minutes was allowed at zero resistance;

• every three minutes thereafter the flywheel resistance was increased in increments of 30-watts; and

• the test was terminated if the set speed (32-RPM) could not be maintained or due to volitional termination.

The wheelchair ergometer was connected to a Med Graphics system ® (Med Graphics Corp, St Paul Minnesota, USA). Manual calibrations of gas analysis were performed prior to each test to ensure that the correct amount of oxygen concentration was recorded. Athletes were required to wear a portable face mask which measured their expired oxygen and carbon-dioxide flow. A face mask was used to attach the mouth piece which analyzed the amount of airflow that the athlete generated during the test. Athletes had to inhale and exhale through their mouths as the face mask prevented them from breathing through their noses. During the peak VO2 test, verbal encouragement was given to all the athletes to help them maximize their performances. After every three minutes, RPE (rating of perceived exertion) was taken using the Borg’s scale. This scale is a sound predictor of fatigue in the arms (local), and at the chest (lung) area. Exercise heart rate was measured by means of an Accurex Plus ® heart rate monitor. Resting exercise heart rates’ were taken, and every three minutes thereafter during the peak VO2 test. Post-exercise values were obtained up until nine minutes. The age predicted formula (220bpm/min-age) was used to examine whether the participants reached their peak HR values. Blood lactate values were obtained by means of an Accusport ® (Boehringer Mannheim, Belgium) (BM) lactate metre. Lactate strips and Softclix II (Softclix II ® lancets) were used to measure blood lactate concentrations. Resting values were recorded and every three minutes thereafter during the peak VO2 test until exhaustion. Post-exercise values were recorded up to nine minutes.

As shown in Figure 1 the paraplegics had a higher absolute peak VO2, when compared with the quadriplegic groups. Comparing percentage differences (Table 1), it was evident that the “other” group (34%) and the paraplegic group (27%) were above the average group mean (1564.3 ml/min-1), whilst the other two groups were (21% and 15%) below the group mean, respectively. 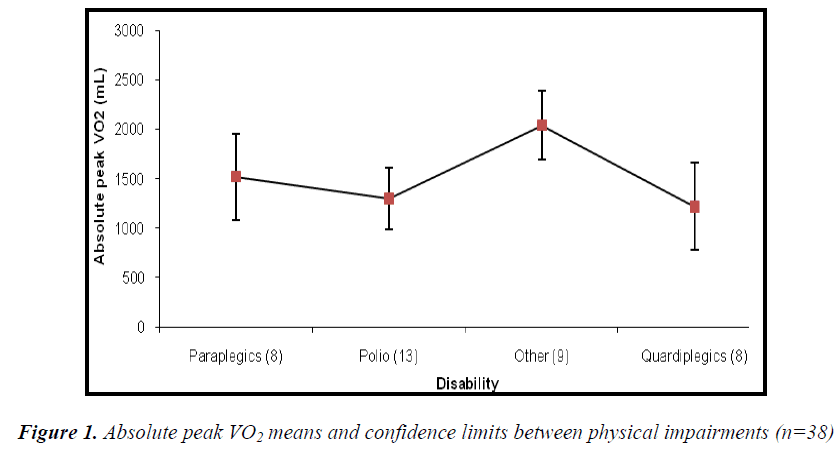 Eriksson et al. [8] found that peak VO2 values during maximal exercise increased with lower levels of spinal cord injury, indicating that paraplegics had a higher peak VO2 than quadriplegics. Bhambhani et al. [7] also reported similar results when peak VO2 was compared between paraplegics and quadriplegics. Figure 1 demonstrates that the “other” group displayed the highest absolute peak VO2 values (2182.7 ml/min-1). This phenomenon can be attributed to the fact that this group did not consist of any SCI athletes. Thus more muscle mass was utilised and the redistribution of blood flow was enhanced [11]. 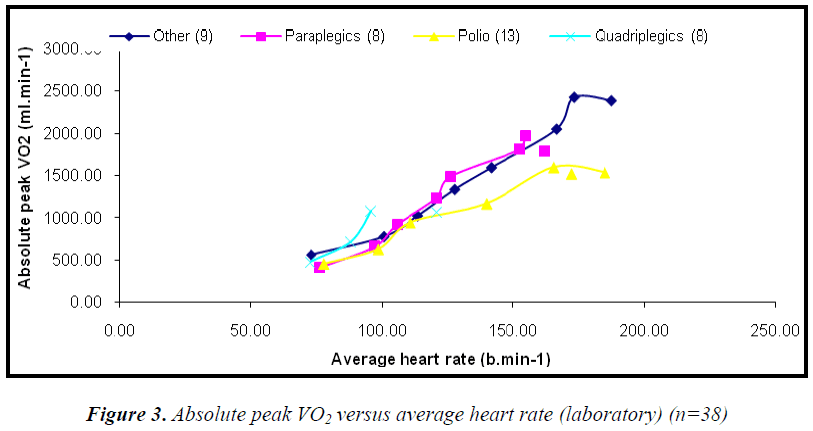 A graphic illustration of average and maximal peak VO2 and HR values is presented in Figure 3. Bar-Or and Nene [12] noted that there was no linear relationship between HR and peak VO2 in the individuals they tested who had a lesion above the third thoracic level (T3). In contrast, this study revealed that a linear relationship existed between absolute peak VO2 and HR (Figure 3). Between all the groups, the HR increased as the absolute peak VO2 increased, which gave an indication of linearity. Similar to this finding, Bar-Or and Nene [12], Jehl et al. [13], Hooker et al. [14] and McLean et al. [9] concluded that there was a linear relationship between HR and peak VO2 in individuals with spinal cord injury. The polio group and the “other” group displayed the highest average HR values (184 b/min and 187 b/min), respectively.

Scientific literature on aerobic characteristics of wheelchair athletes is sparse. Therefore, access to more recent literature on the subject was difficult to find. Furthermore, it is desirable to collect the data on larger samples of wheelchair athletes, but this was not feasible as they are usually found in relatively small numbers. These limitations should be considered in interpreting the findings of this study.

It is important that athletes suffering from spinal cord injury or any other type of physical impairment establish some type of anaerobic/aerobic fitness specific to their sport. This study found that paraplegics reported a higher absolute peak VO2, when compared with the quadriplegic groups. For disabled athletes, sport participation is imperative for optimising their health, functional ability and physical performance.