Background: Acromegaly is a rare disease characterized as a disfiguring and progressive disorder caused by prolonged exposure of high levels of growth hormone (GH) and insulin-like growth factor 1 (IGF-1).

Objective: To evaluate treatment management and follow-up with patients who have acromegaly.

Acromegaly is a rare disease that can be characterized as a debilitating disorder, disfiguring and progressive, caused by prolonged exposure to high levels of growth hormone (GH) and IGF-1 [1]. The annual incidence is 3-4 cases/million, with a prevalence of 40-90 cases/million, according to European studies [1-3].

The most prevalent cause of hypersecretion GH sporadic is the pituitary adenoma secreting GH, corresponding to 99% of cases, and very rarely by ectopic hypersecretion of GHRH [2-4]. In familiar cases, somatotropic adenoma may be part of two neoplastic hereditary syndromes, multiple endocrine neoplasia type 1 (MEN-1) and Carney complex (CNC), or it may occur isolated in a clinical condition termed isolated family somatotropic adenoma (IFS) [3,4].

The average age of diagnosis is 40-45 years, which is often performed about 8-10 years after the onset of signs and symptoms due to the lack of population knowledge [1,2]. Thus, it highlights the relative risk of mortality compared to the normal population, which is 2-3, with the main causes of mortality being cardiovascular and respiratory complications. This risk can be reversed with proper treatment [1,2].

In this context, studies reveal that morbidity and mortality secondary to cardiovascular, metabolic and respiratory complications are significantly increased in patients with acromegaly in activity [4]. The literature shows a significant correlation between GH concentrations and increased mortality in acromegaly [3,4]. It can be seen, however, that patients with adequate control of GH concentrations have a similar mortality to the rest of the population [2,4].

There are reports that tumor size may compromise in relation to disease remission [3,4]. Previous studies demonstrated the clinical alterations of patients that are not effective to followup and were set as a criterion for control or remission [4,5]. Thus, the disease control criterion is based on the serum levels of GH and IGF-1 [3,4].

In the meantime, several studies have shown that GH levels less than 2.5 ng/ml are associated with normalization of mortality in acromegaly [3,4]. In our study, we used values according to new consensus, in which the reference values for analyses of remission are lower [5]. There is no consensus on the influence of normal levels of IGF-1 on mortality rates. Some epidemiological studies have suggested that the attainment of normal serum IGF-1 is related with a reduction in mortality rates, so our interest to evaluate IGF-1 with GH [3-5].

Studies evaluating clinical therapeutic success associated surgery with the use of octreotide are incipient. In this context, justified our interest in order to better management these patients as well as reduce complications inherent in acromegaly.

Data was collected through medical records of patients. According to current guidelines, it is considered to control the disease when levels of GH and IGF-1 are normal and not controlled when both parameters are changed. Defined in this study: 1) controlled disease (CD): basal GH <1.0 ng/ml or GH nadir in OGTT <0.4 ng/ml and IGF-1 standard; 2) uncontrolled (DNC): Basal GH>1.0 ng/ml or nadir in OGTT>0.4 ng/ml IGF-1 and higher; 3) inadequately controlled (DIC): Normal GH and IGF-1 elevated or elevated GH and IGF-1 standard. These criteria are used in clinical practice to monitor the disease activity and evaluate the requirement in adjuvant therapy combined [3-5].

The data collected regarding the baseline laboratory dosages of GH and IGF-1 and GH nadir in OGTT (Oral tolerance test 75 g of glucose) are evaluated in the routine of each consult. They were considered for analysis values GH and IGF-1 performed at the first visit without prior treatment and the value of the last visit after clinical treatment and/or surgery and/or radiotherapy. GH was measured by chemiluminescence methods, whereas IGF-1 values were determined by IRMA.

Retrospectively selected 37 patients with acromegaly in the follow-up Unit of Endocrinology in Santa Casa Medical School, 13 men and 24 women; mean age 49 ± 10.7 years (30-68 years) from 2000 to 2014. Five patients were previously excluded due to a follow-up loss or evolved to death not related to comorbidity of acromegaly (Table 1). 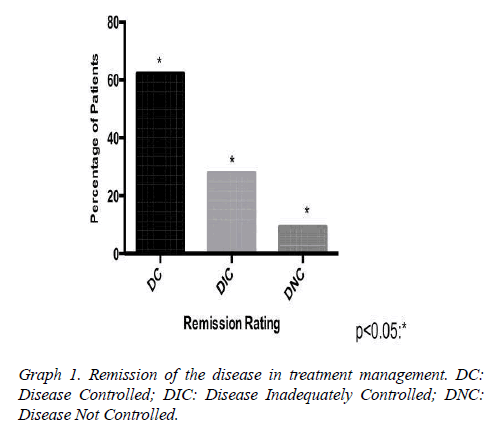 It is an interesting highlight that the fall of GH was proportional to baseline and it depends on what were the previous treatments, which were either clinical, surgical or a combination of both. The remission rate was evaluated according to the "Cure criteria for Acromegaly" presented in Graphs 2-4. 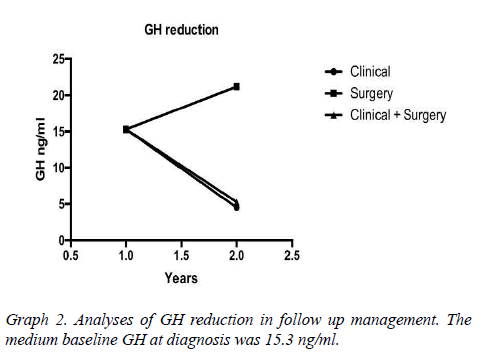 Graph 2. Analyses of GH reduction in follow up management. The medium baseline GH at diagnosis was 15.3 ng/ml. 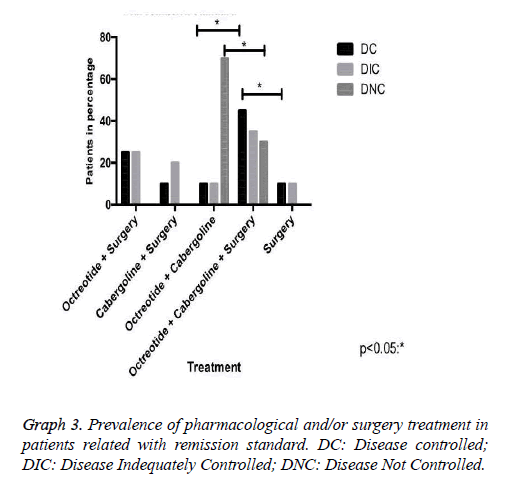 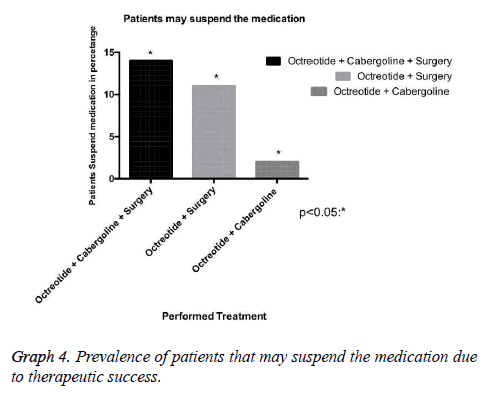 Graph 4. Prevalence of patients that may suspend the medication due to therapeutic success.

Treatment of acromegaly is the normalization of both GH and IGF-1 in the control of tumor growth, and preservation of pituitary function possible, especially in the total or partial resolution of co-morbidities and an increase in the reversal of mortality [6,7]. The types of treatment for medications such as Sandostatin and/or cabergoline, with transsphenoidal surgery or not, suggested that its results depend mainly on the characteristics of somatotrophic adenoma and the surgeon's experience with the procedure, which can be associated with radiotherapy [6-8].

The laboratory criteria for biochemical remission of acromegaly has been modified over the years as a result of more sensitive assays for measurement of GH and IGF-1 and epidemiological studies linking the reduction of morbidity and mortality in disease with increasingly lower values of GH [5]. Thus, the criteria were adopted for different biochemical remission for acromegaly in the series published in the literature, hindering a direct comparison between them [5].

The evaluation of a cumulative meta-analysis resulted in an average rate of biochemical remission of 61.8% (42 to 82.5%) [9]. In our group of patients, we obtained a biochemical remission rate of 90.6%, being that 62.5% with CD and 28.1% with DIC; only 9.4% developed with DNCD. Our study demonstrated that elevated GH levels were not a positive predictive value for therapeutic failure as occurred in other literature reports. These studies had very high preoperative levels of GH that were also involved with surgical treatment failure in acromegaly, but the sample size was minimal [4,9].

There is a crescent interest in this survey for the best form of therapy for acromegaly [4,9]. Most studies show low isolated surgical success rate, which cannot unfortunately be proven in this study due to a small number of patients who underwent this procedure exclusively, corresponding to 12.5% [9,10]. Of these, 50% had DC and 50% DIC; therefore, the study of medications alone or in combination with surgery is increasingly required and comprehensive [9-11].

In case of pharmacological therapy, three major pharmacological classes may be helpful: somatostatin analogues (SRIFa), dopamine agonists (DA) and GH receptor antagonists [1]. Our study demonstrated only the first two. The SRIFa has been considered the most effective drug in the normalization of GH levels and are usually employed in cases that do not respond to surgery [1,2,12]. Its effectiveness as a primary treatment of acromegaly has been demonstrated in literature as well as in this study, which 10.7% of patients had biochemistry remission using only Sandostatin associated with cabergoline [7,9,10].

The dopaminergic D2 receptor is expressed in some somatotrophs, which validates the use of dopamine agonists in the acromegaly treatment [1]. The analysis of several studies showed that therapy with cabergoline allowed normalization of GH and IGF-1 on average, respectively, 34% and 30% of acromegaly patients [11,13]. Our casuistry demonstrated getting better at 10% when isolated, and 65% when in association with octreotide for those patients with DC.

In this context, drug therapy with somatostatin analogues, and in selected cases with cabergoline, is currently an important resource in the treatment of acromegaly with high biochemical remission rates [12,13]. Our study reveals that 75% of patients with biochemical remission of the disease made use of Octreotide, with 80% of this group was featured with DC. It is important to consider that the cost of these therapies is extremely high. In our series, 30% of these patients stopped using the medication after successful surgery and pharmacological therapy [12-14].

A comparative study revealed casuistry similar to ours, in relation to response to therapy with Octreotide in acromegaly patients [13]. This study reported that the 32 cases in monitoring the response to Octreotide was 23 (72%) with GH <5ng / ml and 17 (53%) GH <2.5 ng/ml after beginning medication [13]. IGF-1 was measured in 28 of 32 cases and normalized in 9 patients (32%). Our study also showed that 80% presented lower GH values for monitoring with Octreotide, however, most related to surgery.

The major limiting factor of therapy with somatostatin analogs is the cost. Fortunately, in our country Octreotide LAR is purchased and distributed by State Health Departments for adjuvant therapy of acromegaly in all states, with the exception of Acre, Roraima, Tocantins, Rondônia, Amapá and Sergipe [12,14].

Few studies have reported the treatment management of patients with acromegaly, and the causes of therapeutic failure. This study demonstrated a small fraction of patients with disease not controlled, with any statistical significance. These patients probably evolved with therapeutic failure due to tumor size greater than 3 cm in all cases, and there are no comparative studies.

Our study demonstrated the importance of multidisciplinary approach clinical and surgical. Otherwise, a recent survey showed that pegvisomant is effective and useful monotherapy treatment for Japanese active with acromegaly that have little concern for safety, although the interpretation may be limited because of the small number of subjects [15].

Finally, radiation therapy is, in most cases, the third line treatment of acromegaly when surgical and pharmacological therapies are not sufficient to lower the levels of GH and IGF-1 to safe values [14]. In our health service, radiotherapy indicated a small group of acromegaly patients with aggressive tumors that invaded adjacent structures, which do not cure with surgical resection and continue to grow and/or do not reach levels of GH and IGF-1 secure with pharmacological therapy available [1,14]. Only 6.25% of our patients underwent the procedure after clinical and surgical treatment failure. In this case, patients presented adequate control of the disease, however, still making use of Sandostatin and cabergoline medications.