Background: This study was to investigate the role of AB-PAS in the diagnosis of Intestinal Metaplasia (IM) as compared to HE staining, and to evaluate the relationship between Helicobacter pylori (H. pylori) infection and IM to explore whether IM was a possible pathogenic mechanism of H. pylori in gastric carcinogenesis.

Methods: Patients who suffered from Chronic Atrophic Gastritis (CAG) to Gastric Cancer (GC) were recruited, and the gastric tissues (CAG tissues and cancer tissues) were collected for HE staining, ABPAS and silver staining for detection of IM and H. pylori infection.

Conclusions: AB-PAS is superior in the diagnosis of IM to HE staining and IM might be one of pathogenic mechanisms underlying the H. pylori induced gastric carcinogenesis.

Gastric Cancer (GC) is one of the leading causes of human cancer-related death and has the second highest incidence and morbidity globally according to the WHO statistics. The overall five-year survival rate of Early Gastric Cancer (EGC) is higher than 90% while the prognosis of Advanced Gastric Cancer (AGC) is still tremendously poor [1]. Therefore, early detection of precancerous lesions is pivotal for the prevention of GC. Intestinal Metaplasia (IM), one of precancerous lesions of GC with the nature of metaplasia [2], can be halted and reversed if interventions are given timely [3]. Hematoxylin- Eosin staining (HE staining) is the most common method used in the diagnosis of IM. However, the procedures and evaluation criteria of HE staining are complex. Thus, to investigate potential staining methods with simple procedures and evaluation criteria is necessary and urgent for the diagnosis of IM.

There are some risk factors for GC such as family medical history, lifestyle, bile reflux, and Helicobacter pylori (H. pylori) infection [4]. Marshall and Warren originally discovered H. pylori in 1982. H. pylori, prevalent worldwide [5,6], belongs to gram negative, non-spore forming spiral bacteria, and colonizes the human stomach. It is closely related to peptic ulcer and chronic gastritis, which is also one of carcinogenic factors [7-10]. At present, the gastric carcinogenic mechanisms of H. pylori mainly include gene instability, cytokine, immunity, proliferation and apoptosis of gastric epithelial cells [11-14]. It also assumes that H. pylori accounts for the IM of gastric epithelium resulting in GC [15,16], but evidence is still conflicting. Thus, this study was to investigate the role of AB-PAS in the diagnosis of IM as compared to HE staining, and to evaluate the relationship between H. pylori infection and IM to explore whether IM was a possible pathogenic mechanism of H. pylori in gastric carcinogenesis.

All procedures followed were in accordance with the ethical standards of Institutional Review Board of Sir Run Run Shaw Hospital and with the Helsinki Declaration of 1975, as revised in 2000. Informed consent was obtained from all patients for being included in the study.

Finally, 26 out of 5475 patients met the inclusion criteria and recruited into this study. CAG tissues and cancer tissues were collected by endoscopic biopsy and/or surgery at different time points. Three slices were obtained from each tissue for HE staining and AB-PAS for the evaluation of IM, and for silver staining for the detection of H. pylori infection. The flow chart is shown in Figure 1. 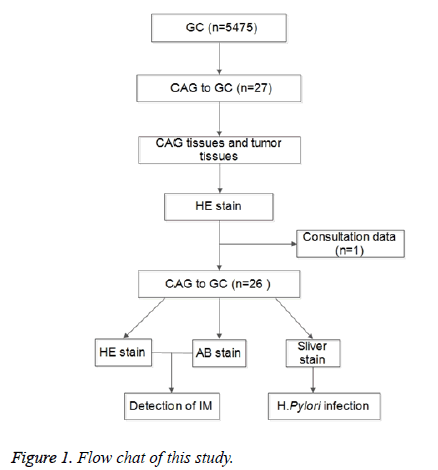 Figure 1: Flow chat of this study.

The diagnosis of IM was performed independently by three experienced pathologists according to the diagnostic criteria of Chinese Anti-Cancer Association 1998. Any disagreement was resolved by discussion. H. pylori infection (+) was defined when H. pylori was present in one and/or two slice(s). Statistical analysis was performed using SPSS version 17.0 statistical software (Chicago, IL, USA). Correlation was assessed by the Spearman rho correlation analysis. A value of P<0.05 was considered statistically significant.

Twenty-two male and four female patients aged 41-84 years met the inclusion criteria and were recruited into this study. Nineteen out of twenty-six lesions were from the gastric antrum and five from gastric fundus or body. The main pathologic type of GC was adenocarcinoma, and two patients were diagnosed with gastric stump carcinoma (Table 1). 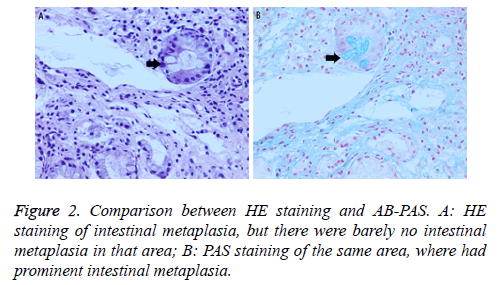 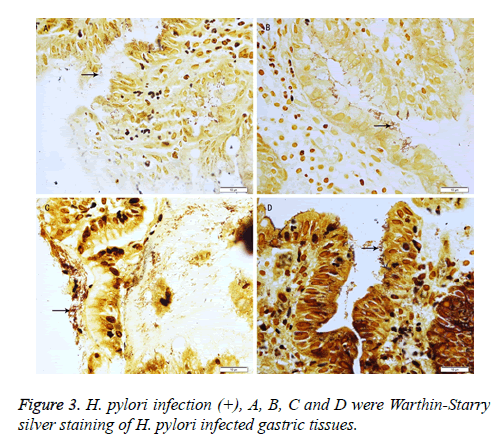 HE staining is the most common used method in the diagnosis of IM. Although the classifications of IM according to HE staining are comprehensive, it is still complex in procedures and evaluation criteria. IM classifications by AB-PAS are concise and explicit (none, existence). In this study, IM (+) slices in HE staining were also IM (+) in AB-PAS, but a half of IM (-) slices in HE staining were IM (+) in AB-PAS, the severity of which were all mild. This means AB-PAS may identify earlier IM, but the specific reasons are unknown. It is possible that goblet cells in the gastric mucosa secret acidic proteins before they become mature. Thus, further studies are needed to confirm the results.

H. pylori are involved in the pathogenesis of GC [9]. Some studies have reported that they contribute to GC by mainly regulating genes (ras, p53, c-myc, etc), cytokines, proliferation and apoptosis of gastric epithelial cells [9,17,18]. GC secondary to IM is also considered as one of consequences due to H. pylori infection, but evidence is still conflicting [16]. In this study, the correlation coefficient between H. pylori infection and IM was 0.41 (P<0.05), implying a correlation between them. There might be several reasons accountable for this correlation. First, the sample size in this study was small, and only 21 out of enrolled patients were H. pylori (+). Second, H. pylori can be classified into two types: CagA positive and CagA negative. CagA positive H. pylori are highly pathogenic while CagA negative H. pylori are not [19]. We did not detect whether H. pylori detected in 21 H. pylori (+) patients were pathogenic H. pylori. Although the correlation coefficient was only 0.41, we still speculate that IM is one of mechanisms underlying the H. pylori induced carcinogenesis according to above factors.

Undoubtedly, it will take a remarkably long time evolving from CAG to GC. In our study, it was about 8 months (data not shown). Possible explanation might be that patients visit hospital only when they have some symptoms such as abdominal distension, abdominal pain, and dyspepsia and they might have suffered from CAG for a long time, or even decades before diagnosis. A majority of subjects died at the time of study and thus we were unable to confirm the exact time when patients got sick. More exactly, the “8 months” were the time interval between the diagnosis of CAG and GC.

In the present study, patients with CAG and GC occurring in the same location were recruited in order to assure that GC evolved from CAG, which reduces the error. Previously, it was difficult for gastroscopists to obtain the gastric mucosa from the same point at different time points. Marking Targeting Biopsy (MTB) is now considered as an accurate assisted biopsy technique during gastroscopy. However, repeated injection of MTB solution is necessary for long-term supervision, and may result in inflammation of the gastric mucosa and finally confuse the histopathological evaluation; despite MTB solution was not harmful. Computer Simulation Making Targeting Biopsy (CSMTB) is a technique which can automatically memorize and identify the original lesion of biopsy without solution injection. Ever since the first use in clinical practice, it has never stopped being improved.

There were still several limitations in this study. First, this study was retrospective, and incomplete patients’ information was inevitable. Second, it was difficult to obtain the gastric tissues due to a long time span. More studies are still required before a more preferable method for the diagnosis of IM is developed.

Taken together, AB-PAS is superior to HE staining in the diagnosis of IM, but its clinical application is needed to be further confirmed in future prospective studies. The correlation coefficient between H. pylori infection and IM was 0.41, implying an association between them. Thus, IM may be one of mechanisms underlying the H. pylori induced carcinogenesis.