A study on myocardial performance index in children with nephrotic syndrome in age group 1-12 years.

Background: Nephrotic syndrome (NS) is a common paediatric kidney disease characterised by leakage of protein from the blood into the urine through damaged glomeruli. An increased risk of cardiovascular disease exists in patients with NS because of hyperlipidemia, increased thrombogenesis, and endothelial dysfunction. Objective: Study of Myocardial Performance Index in children with Nephrotic Syndrome and its correlation with age of onset, relapses, hypertension and lipid profile Methods: Total 70 children with nephrotic syndrome of age group 1-12 years included in this observational study. All Children subjected to full history taking, clinical examination and lab studies including serum albumin, serum cholesterol, renal function test. Myocardial performance Index of these children calculated by Doppler Echocardiography using Tissue Doppler Imaging performed in the apical four chamber view. Isovolumetric Contraction time (IVCT), Isovolumic Relaxation time (IVRT), Ejection Time (ET) and MPI were calculated. Results: In our study the mean myocardial performance index is found to be .398±0.045. Significant increase in the Mean Myocardial Performance Index of the patients with the increase in the number of relapse and duration of disease was observed. Myocardial Performance Index has inverse relation with Global ventricular function. Increase in MPI indicate worsening Global Ventricular Function. MPI is significantly higher in patients of Nephrotic Syndrome who had hypertension as compared to patients with normal blood pressure. There is a significant positive correlation between Serum Cholesterol and MPI.

Nephrotic syndrome (NS) is the most common chronic renal disease of childhood and the most common type of NS is Primary Nephrotic Syndrome [3]. It is caused by impaired glomerular function, characterized by protein leakage from the blood to the urine through the glomeruli, resulting in proteinuria, hypoalbuminemia, hypercholesterolemia and generalized edema [4]. Apart from hyperlipidemia, a wellknown risk factor for coronary artery disease (CAD) and a defining hallmark of Nephrotic Syndrome, these children also get exposed to other risk factors associated with impaired endothelial function and adverse cardiovascular outcomes like high oxidative stress, frequent infections, sustained proteinuria, hypoalbuminemia and thromboembolism [5].

An Echocardiographic/Doppler index of combined Systolic and Diastolic function has been described by Chuwa Tei. Myocardial Performance Index, also called Tei index, is calculated by dividing the sum of IVRT and IVCT by Ejection time (ET). Normally (0.39 ± 0.05). This Tei Index is simple to calculate, reproducible, independent of Heart Rate and Blood Pressure. Measurement of Tei Index is Noninvasive and Easily Obtained, it does not require the presence of an echocardiographer with great experience and it does not materially prolong the time required for examination.

All the consecutively admitted Nephrotic Syndrome Children of age group 1-12 years fulfilling the inclusion criteria of the study were enrolled. Nephrotic Syndrome Children with comorbidities like Congenital Heart Diseases and Severe Anaemia which could independently affect Myocardial Function are excluded. Informed written consent was obtained from parents of eligible Children. Participant’s demographic profile, immunization status, lab parameters were taken and entered into a case record form. Myocardial Performance index assessment was done by the method of Tissue Doppler Echocardiography. 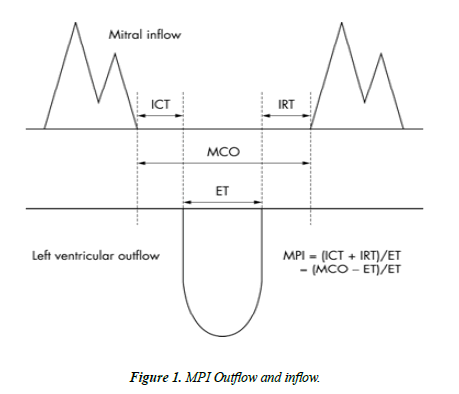 The collected data were transformed into variables, coded and entered in Microsoft Excel. Data were analyzed and statistically evaluated using SPSS-PC-25 version.

Quantitative data was expressed in mean ± standard deviation or median with interquartile range and depends on normality distribution. Difference between two comparable groups were tested by student’s t-test (unpaired) or Mann Whitney ‘U’ test while for more than two groups comparison ANNOVA test or Kruskal Wallis H test was used. Qualitative data were expressed in percentage and statistical differences between the proportions were tested by chi square test or Fisher’s exact test. Spearman correlation coefficient was used to correlation between two quantitative parameters. P’ value less than 0.05 was considered statistically significant.

Table 1: Association of frequency of relapses with MPI.

Nephrotic syndrome (NS) is a common paediatric kidney disease characterised by leakage of protein from the blood into the urine through damaged glomeruli. It is classically defined by nephrotic-range proteinuria (≥ 40 mg/m2/hour or urine protein/creatinine ratio ≥ 200 mg/mL or 3+protein on urine dipstick), hypoalbuminaemia (<25 g/L) and oedema [6]. An increased risk of cardiovascular disease exists in patients with NS because of hyperlipidemia, increased thrombogenesis, and endothelial dysfunction [7]. Hypercholesterolemia is strongly associated with severity of hypoalbuminemia, and persistent proteinuria or renal insufficiency also contributes to cardiovascular disease [8].

The MPI increased gradually with relapse and the number of episode in Nephrotic Syndrome and this increase was found to be significant. There have been no studies in the Indian subcontinent which have explored this relation between relapse and Myocardial Performance Index.

The patient with hypertension-13544.html'>Hypertension had a significantly higher MPI, the studies in the past have linked the increased MPI with essential hypertension in children [11,12]. Saleh et al, also recorded and increased systolic and diastolic blood pressure in their study subjects.

A significant correlation was established between myocardial performance index and serum cholesterol in our patients, however in the study by Saleh et al an insignificant increased mean cholesterol was found in patients with RV diastolic dysfunction as compared to normal patients, in the study by Caraba et al [1], a strong inverse correlation (r=-0.9399) was also observed between the endothelial dysfunction and total cholesterol in the patients of nephrotic syndrome. Also in the study by Oflaz et al, Coronary flow reserve measurements were negatively correlated with total cholesterol (r=−0.31; p=0.02). However as opposed to our study in which the creatinine was positively associated with MPI there was a negative correlation with endothelial dysfunction with creatinine.

The cardiac performance in the patients of nephrotic syndrome is a sum total of the aetiopathogenesis as evidenced from the present study as well as research done in the past. There is a requirement of regular cardiac monitoring in patients with Nephrotic Syndrome as the risk of progression to cardiovascular disease through accelerated artherosclerogenesis is increased in such patients. There needs to be further exploration of the topic with appropriate randomised controlled trials to quantify the level of MPI in patients of Nephrotic Syndrome as to better use it as a prognostic indicator in such patients.

What is already known?

Increase in Serum Cholesterol level and Blood pressure is a prognostic marker for Myocardial dysfunction in children with Nephrotic Syndrome.

What this study adds?