A Study of Pulmonary Functions and Lipid Peroxidation Biomarker in COPD: Correlation between Malondialdehyde and Lung Functions

Global Initiative for Chronic Obstructive Lung Disease (GOLD, 2008) has defined Chronic Obstructive Pulmonary Disorder (COPD) as “a diseased state which is characterized by airflow limitation that is not found to be fully reversible”. COPD is projected to be the third leading cause of deaths globally by 2030. The most common Risk Factor for COPD is tobacco smoking. Poor Socio-economic Status, Occupational Factors, Pollution and Poor Nutrition also contribute to development of COPD. Free Radicals carry one or more unpaired Electrons, capable of independent existence. These are highly reactive species, found implicated in various diseases, known to humans. Normally, they are kept under check by various Enzymatic as well as Non-enzymatic Antioxidant Defence Mechanisms. Enzymatic Antioxidants include Superoxide Dismutase, Catalase and Glutathione Peroxidase. Lungs are exposed to high levels of Free Radicals. Production of ROS has been found directly linked to oxidation of Proteins, DNA, and Lipids, which may cause direct lung injury, or may induce a variety of Cellular Responses, through the generation of secondary Metabolic Reactive Species. Membrane Lipids are highly susceptible to Free Radical damage which is found to be highly detrimental to the functioning of the Cell. Malondialdehyde is a product of Lipid Peroxidation and an indirect measure of Free Radical activity in body. As free radical injury increases lung functions show decrease. Oxidative Stress is reported to play an important role in the Patho-physiology of COPD. The aim of the present Study is to evaluate the oxidant antioxidant imbalance in healthy non-smoker controls and COPD group. A total of 60 control and 60 COPD patients were studied. The mean age is more in COPD group, as compared to healthy controls, which identifies advancing age as a risk factor for COPD. The mean Body Mass Index (BMI Kg/m2) and weight of COPD group is reduced as compared to control group. GOLD 2008 criteria was used to assess lung functions. Lung functions namely FEV1, FVC, FEV1/FVC% and FEV1 % PREDICTED showed significant reduction in COPD groups, as compared to healthy non-smoker controls. MDA in Control and COPD group (1.09±0.09 and 1.41±0.23 nmol/ml respectively) showed significant changes (P<0.001). Our Study results also demonstrate significant negative correlations of MDA with FEV1 % PREDICTED (r=-0.828,P sig at <0.001 level), FEV1(r=-0.775, P sig at <0.001 level), FVC (r=-0.625,P sig at <0.001 level), FEV1/FVC % (r=-0.761,P sig at < 0.001). On the basis of our Study, it is concluded that advancing age and male gender are risk factors for COPD, the disease contributes to weight loss and there is inverse correlation between MDA and Lung functions

The earliest known documented literature on COPD dates back as early as to 1679, when Bonet led the team on ‘Voluminous Lung’. The term “Chronic Obstructive Pulmonary Disease” (COPD) was first mentioned by Mitchell in the United States of America (Mitchell et al 1964). Terms like Chronic Obstructive Airway Disease (COAD), Chronic Obstructive Respiratory Disease (CORD), Chronic Airway Obstruction (CAO), and Chronic Airflow Limitation (CAL) were all used and are being used synonymous with COPD. WHO recognizes that Chronic Obstructive Pulmonary Disease (COPD) carries much importance in matters of public health. 210 million people suffer from COPD, of this 80 million suffer with Moderate to Severe COPD; and, it is responsible for 5% of total death globally. It is projected to rank third leading cause of death by 2030 globally [1]. The prevalent rates vary between 2 to 22 per cent in men, and from 1.2 to 19 per cent in women [2]. A Median Rate of 5% in men and 2.7% in women has also been reported [3]. The major risk factors, contributing to COPD, can be divided into (i) External, and (ii) Internal Factors. Smoking - both active and passive - is responsible for Patho-physiology of COPD [4,5,6]. An imbalance between Oxidants and Antioxidant capacity is reported to play an important role in the Patho-physiology of COPD, which results in multisystemic manifestations of the disease including weight loss [7,8]. Oxidative Stress induces Peroxidation of Membrane Lipids which amplifies cellular damage. Lipid Peroxidation increases in a number of disease states including COPD [9]. It generates a variety of relatively stable decomposition end-products like MDA (Malondialdehyde) which is a physiological Ketoaldehyde and acts as a marker for oxidative stress[10].

AIM AND OBJECTIVES: The aim of the present Study is to assess the pulmonary functions and biomarker of lipid peroxidation Malondialdehyde in healthy nonsmoker controls and COPD patients and to find the correlation between them.

Place and Duration of Study

The Study was conducted in the Department of Physiology, Department of TB and Chest Diseases and Department of Biochemistry, Jawahar Lal Nehru Medical College, AMU, Aligarh. The Study period was between May -September, 2009.

The present Study is a Case Control Study. The patients included in the present Study, were selected from among those attending the Out-Patients Department (OPD), Emergency Ward, and from those Indoor Patients, admitted in the Ward for Tuberculosis and Chest Diseases, Jawaharlal Nehru Medical College, Aligarh Muslim University, Aligarh, Uttar Pradesh. Healthy subjects serving as controls were selected from the Institution. The Study was approved by the Board of Studies, and Institutional Ethical Committee clearance was obtained.

Subjects over 18 years of age with no history of Bronchial Asthma, Diabetes Mellitus, Hyper-tension, Lung Cancer, Cardiovascular and Renal Diseases, and other diseases in which Oxidative Stress has been documented to be a causative factor, were included in the Study. Healthy controls were non-smokers and with no exposure to biomass fuel. Patients with history of exposure to risk factors for COPD, particularly smoking and/or exposure to smoke from biomass fuel and history of dyspnea and chronic cough, or sputum production on most days for at least three months of the two consecutive years were included in the Study. Subjects taking antioxidants were excluded.

Measurement of Height, Weight and BMI: Height (in centimeters) was measured without shoes in standing position, with heels put together and with calve buttocks, heels and back touching the Stadiometer and head of the patient tilted in such a manner that the lower orbital margin was at the level with the external auditory meatus (Frankfurt Plane). Weight (Kilograms) was recorded without shoes and minimal clothing. BMI (Kg/m2) was measured by dividing weight by height in meters square.

PFT was performed using the Mir Spiro Lab II Spirometer. Measurement of Forced Vital Capacity and Forced Expiratory Volume was done in the First Second. The FEV1/FVC is calculated using the Maximum FEV1 and FVC from the technically acceptable, though not (necessarily) from the same Curves. The Data were obtained from the printer, attached to the Spirometer.

Under aseptic conditions and with prior consent of the subjects, 5 ml of blood sample was drawn from the peripheral vein from the subjects of both the sexes. It was centrifuged at 3000 rpm for fifteen minutes. Free radicals were estimated by the method, adopted by Philpot [11]. Free Radicals by their unstable and transient nature, are difficult to measure directly. Their ability to cause Lipid Peroxidation has been used as an indirect measure. One Molecule of MDA reacts with two Molecules of Thiobarbituric Acid (TBA) at pH 3.5. The pink color Chromagen is measured spectophotometrically at 532 nm.

Statistical analysis was done, using the statistical package for social science (SPSS 17.0) for Windows Software, Microsoft Excel, 2007. The results were expressed as Mean±Standard Deviation (S.D). The difference in the Serum levels of MDA was evaluated by means of t-test. Unpaired t test was applied to analyze the statistical significance of change in the MDA between Controls and COPD cases. Pulmonary Function Tests parameters were also statistically analyzed in the same way. Pearsons correlation was applied to find the relation. P Value of less than 0.05 was taken as statistically significant.

Table 3: Malondialdehyde concentration in serum in control and COPD groups (p significant at <0.05) 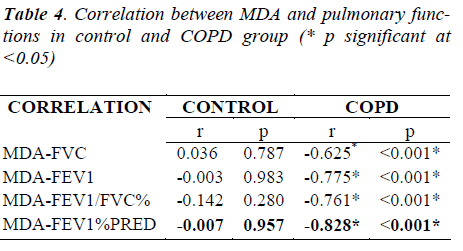 Table 4: Correlation between MDA and pulmonary functions in control and COPD group (* p significant at <0.05)

Lungs are exposed to high levels of environmental Oxidants, which together with their large surface area and blood supply, make them susceptible to Oxidative Stress due to imbalance between Oxidants and Antioxidants [12,13]. The reported prevalence of COPD is higher among men than women [14,15,16]. Sex (Male) and increasing age are identified as Risk Factors in most of the Studies from Asia [17,18]. In India, prevalence rates, varying between about 2 -22% in men and between 1.2- 19% in women, have been shown in different reports [19]. Loganathan R et al, 2006, reported a lower prevalence of COPD in females, as compared to males [20]. COPD can be attributed to greater prevalence of smoking among men, as well as cumulative effects of smoking, and other exposures with advancing age. Aging may be characterized by altered lung Alveolar Cell maintenance due to decrease in growth factor signaling and an overall increased sensitivity to Oxidative Stress [21]. In the present Study, Mean BMI value was found to decrease significantly in COPD Group, as compared to healthy controls.

Weight loss in COPD, like any other chronic inflammatory disorder, has been associated with increased circulating levels of Tumour Necrotic Factor α [22,23,24]. There is also increase in the levels of Leptin, which may contribute to weight loss. Low BMI may be attributed to Skeletal Muscle Atrophy and Weight Loss [25]. Malnutrition and unexplained weight loss are also known with more advanced COPD. In COPD, there appears interplay of Inflammation, Remodeling, Bronchospasm, Mucus Hypersecretion, Loss of Elastic Recoil and Increased Airway Resistance, resulting in progressive reduction in the Expiratory Airflow. Pierachille S et al, 2005, reported a marked reduction in FEV1 and FEV1 % in COPD patients, when compared with the Healthy Controls [2i6]. The Study conducted by Daphne CR et al in 2008, reported FEV1 % decline in the COPD Group [27]. Production of ROS has been found directly linked to oxidation of Proteins, DNA, and Lipids, which may cause direct lung injury, or may induce a variety of cellular responses, through the generation of secondary metabolic reactive species. ROS may also alter remodeling of extracellular Matrix (ECM) and blood vessels; stimulate secretion of Mucus; inactivate Anti-proteases; cause Apoptosis, and regulate cell proliferation [28]. Alveolar-repair responses and immune modulation in the lung, may also be influenced by ROS. Furthermore, increased levels of ROS are found to initiate inflammatory responses in the lungs through the activation of transcription factors such as Nuclear Factor (NF)-kB and Activator Protein (AP)-1, Signal Transduction, Chromatin Remodeling, and Gene Expression of Pro-inflammatory Mediators [29]. Various Studies have reported that the Plasma levels of MDA are increased in healthy smokers and in patients with COPD [30,31,28]. A Study conducted by Birgul I et al, 2007, showed that MDA levels are significantly higher in smokers than in non- smokers [32]. Sahin U et al, 2001, reported higher Serum Values of MDA in COPD patients, as compared to Controls [33]. Yessica D et al, 2009, reported an increase in MDA levels in all stages of COPD severity, as compared to Healthy Controls [34]. Schunemann HJ et al, 1997; Arpana V et al, 2007, showed that FEV1 percentage predicted decreases as the Mean Value of MDA increases [35,36]. Inverse correlation between lung functions and MDA have been demonstrated [37,38]. As Oxidative Stress increases, MDA would be expected to increase [39].

In conclusion on the basis of the Study, COPD is associated with weight loss probably due to inflammatory mediators. Gender based differences are risk factor for COPD. MDA as a biomarker of ROS is increased in COPD, as compared to non -COPD group, and it causes a deteoriation in the lung functions.

Authors are thankful to the supporting staff of the Departments of Physiology, TB and Chest Diseases and Biochemistry, and to the participants in the Study.