A study of academic stress and its effect on vital parameters in final year medical students at SAIMS Medical College, Indore, Madhya Pradesh

Stress can reduce the efficiency of healthy individuals and it has been shown in most of the physiological studies. The present study was carried out to assess stress and its effect on vital parameters during academic examination in final year medical students. The study was car-ried out at Sri Aurobindo Institute of Medical Sciences, Indore. The final MBBS students of academic year 2010-11 were selected for study. The height, weight, pulse rate and blood pressure were taken before and during examination. Zung’s scale was used for assessment of Stress. Out of 71 students 68 participated in the study. There was highly significant dif-ference in vital parameters [Pulse rate (t=8.89, P<0.001), Systolic Blood Pressure (t=3.89, P<0.001) and Diastolic Blood Pressure (t=2.86, P<0.006)] during examination. It was also observed that the stress level was high. SDS Index of stress was more in girls as compared to boys. No significant change was observed in weight. It was observed that academic examina-tions for medical students are stressful and produce changes in vital parameters which may affect their academic performance. Girls had more stress as compared to boys. Academics and examinations are the most powerful stressors in medical students.

Stress is the body's reaction to a change that requires a physical, mental or emotional adjustment or response. But too much stress can cause a lot of discomfort and can get in the way of being able to focus and achieve. As a col-lege student all have a lot of demands on them, which it can be difficult to balance. (1)Mannapur B. et al (2010) observed that stress is a term in Psychology and Biology, which in the more recent decades, has become a common place of popular parlance. The term ‘stress’ was first em-ployed in the 1930’s by the endocrinologist (2)Hans Selye.

Stress is caused by an existing stress-causing factor or "stressor." All are aware of fearfulness of examinations and especially about practical examination in a medical college. Whether it is a test or an annual promotion ex-amination, it does cause to loose some sleep which leads to anxiety. (3)Reem Rachel A. (2009) confirmed the gen-eral impression that there is a considerable amount of stress among medical students. Perceived stress was sig-nificantly higher among female students [4].

Physiological studies have shown that stress can affect the vital parameters. These changes include increase in pulse rate and blood pressure. The present study was aimed to assess the stress and its effect on vital parameters during academic examination in final year medical students.

The present study was carried out at Sri Aurobindo Insti-tute of Medical Sciences, Indore (M. P.), India in final MBBS students of academic year 2010-11. There were 71 students out of which 68 participated in the study. Ethical approval was obtained from Institutional research and ethical committee. Two months prior to the academic ex-amination height (in Cms.), weight (in Kg.), Pulse rate and Blood Pressure were recorded and again during aca-demic examination the same was repeated. The observed mean age of student was 21 years. Three students were excluded from study as they were absent during examina-tion. After explaining the purpose of the study a question-naire was provided to one student at a time just before the start of viva-voce and was asked to answer (fill up) the questions in prescribed format so as to assess their stress level.

(5)Zung’s scale was used to assess the stress level. The questionnaire consists of twenty questions where Likert Scale Format is used for assessment and scoring of stress level. Ten questions based on positive answers and ten negative are included. Each question has answer score from 1 to 4. The option for each question is (a) None or a little of the time (b) Some of the time (c) Good part of the time and (d) Most or all of the time. The raw score is converted to 100 point scale (SDS Raw Index). SDS Raw Index = (Raw Score/80 total points) x 100 and SDS Index = SDS Raw Index x 1.25. The score obtained was analyzed by using scale of stress according to Zung’s categorization as <50 is Normal, <60 is Mild Stress, <70 is Moderate or Marked Major Stress and >70 is Severe or Extreme Major Stress. Pre readings (before examination) for Pulse Rate, Systolic Blood Pressure and Diastolic Blood Pressure were compared with post readings (at the time of examination). (6) Body Mass Index was calculated for all the students.

The Data were entered into the computer database. The responses of frequencies were calculated and analyzed by using statistical software SPSS version 11.0. Prevalence of an outcome variable along with 95% confidence inter-val was calculated. Student’s t-test for paired samples was used to compare the mean values of study variable vital parameters in relation to stress. The descriptive statistics like mean and standard deviation and Pearson’s coeffi-cient of correlation among different study variables was calculated. The (5)Zung’s self rating depression scale was analyzed by categorization of the three levels (Mild, Moderate or Marked Major and Severe or Extreme Major Stress) of stress as presence of stress. The probability value p<0.05 was considered as significant, p<0.01 and p<0.001 were considered as highly significant. 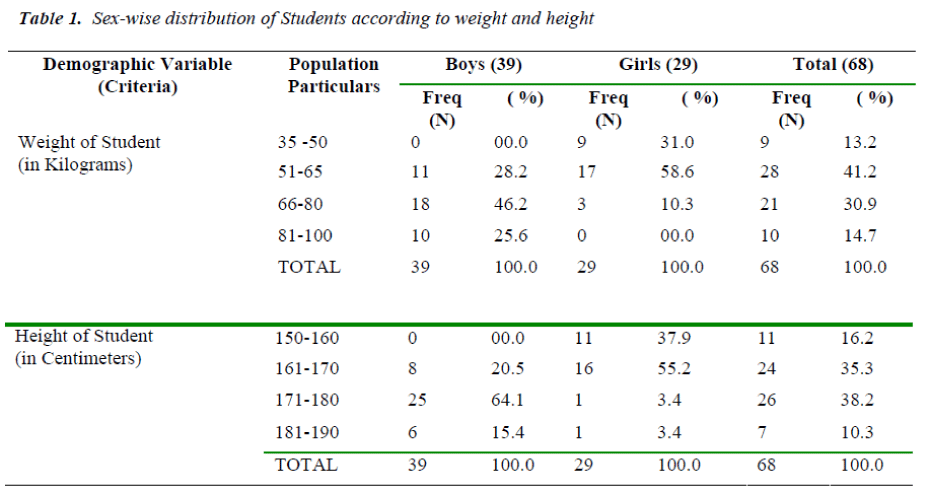 Table 1: Sex-wise distribution of Students according to weight and height

Table 2: Sex-wise distribution of Students according to Stress

Table 3: Sex-wise distribution of Students according to Body Mass Index

It was also reflected that there is a positive and very high degree of correlation (p<0.01) between weight, height and BMI both at the time of examination and before examina-tion. It was noted from table 2 that 7.7% and 13.8% boys and girls were in extreme major stress category which needs careful attention. Moreover it was significantly ob-served that the academic stress level in Medical students during practical examinations in girls is more as com-pared to boys.

The present study showed that there was significant dif-ference in vital parameters (Pulse rate, Systolic Blood Pressure and Diastolic Blood Pressure) due to academic examination. It was also observed that the stress level as indicated by (5)Zung’s self rating depression scale was very high. The girls had more stress as compared to boys. A recent research reported similar findings by (4)Mohsin S. et al (2010) that the overall mean perceived stress was significantly higher among female students and a higher level of perceived stress was reported by the students but with the contrast that stress was not found to differ sig-nificantly on the basis of sex as reported by (7) Supe AN (1998).

Various studies (8)Shah C. et al (2009), (3)Reem Rachel Abraham (2009) and (7) Supe AN (1998) confirmed the general impression that there is a considerable amount of stress among medical students which is common and process oriented. (9) Steenberger et al (1993) and (10) Ronald B. W. (1993) noted that girls have reported ex-ams, as the reason for their stress than their male col-leagues. (11)Mamoza M. A. (2008) obtained the response of stress by confirming the higher prevalence of stress in undergraduate medical students. It was observed by (12)Everly, G. S. and Rosenfeld, R. (1981) that stress is a psycho-physiologic arousal occurring in the body as a result of a stimulus which becomes a “stressor” by virtue of the cognitive interpretation of the individual. Recently (1)Mannapur B. et al (2010) observed that the students with psychological stress were found to be involved in habits like tobacco chewing and smoking, as well as alco-hol intake. Average stress of the professional group is significantly higher then non-professional group of stu-dents reflected by (13) Singh A. and Singh S. (2008).

The prevalence of perceived stress seems to be high among medical students, which tends to affect not only their academic performances but also all aspects of health and the similar findings as the frequency of stress seems considerable with little difference between males and fe-males observed by (14)Babar T. S. et al (2004).

(15)Stowell (2004) had revealed that the stress level in medical students is increased during academic examina-tion and the label “academic examination stress” covers a wide range of situations that may have very different psy-chological and immunological consequences. (16)Faiyaz Qureshi et al (2002) had also concluded that academic examinations in medical students are stressful enough to produce changes in blood pressure and blood cells pa-rameters. (17)Maes M. et al (1998) had observed that stress caused by academic examination led to significant changes in heamatological variables. The study conducted by (18)Sajjan K. and Krupa J. (2005) confirms the general impression that there is considerable amount of stress found among the occupational therapy students.

As it is confirmed the general impression that there is a considerable amount of stress which produces changes in vital parameters in final year medical students and it is common and process oriented. It was also reflected that stress was more in girls as compared to boys. The main stressor was related to academic examinations. An at-tempt has been made to identify the stress profile of final year medical students at the time of academic examina-tions. A high stress level may affect not only academic performances but also all aspects of student health. The stressors should be identified and discussed with individ-ual students.

As stress in colleges cannot be eliminated, teachers can and should do a better job and provide review of academ-ics and exam schedules, more leisure time activities, bet-ter interaction with the faculty and proper guidance, advi-sory services and peer counseling could do a lot to reduce the stress. Interventions like reduction of stress, perceived by students approaching exam can be planned while lay-ing more emphasis on regular, day by day reading, mock examinations and use of question banks could alleviate the fear and anxieties associated with the university ex-amination.

Authors acknowledge that this is a study with sample of only final year medical students drawn from only one medical college. Furthermore, the findings of this study are based on self reported information provided by stu-dents and some potential for reporting bias may have oc-curred because of respondent’s interpretation of the ques-tions or simply because of inaccuracies of responses or desire to report their emotions in a certain way. It could be considered as one of the limitation of this study.

A prospective study could be carried out with a cohort of all five year students in all the medical colleges in the territory of Madhya Pradesh to look at the different levels of stress.

The authors are grateful to referees for their valuable sug-gestions regarding improvement of this research paper.