Herpes Zoster (HZ) or Shingles presents as a cutaneous vesicular eruption in the area innervated by the affected sensory nerve, usually associated with severe pain. Oral manifestations of HZ appear when the mandibular or maxillary divisions of the trigeminal nerve are affected. Osteonecrosis of Jaw Bones (ONJ) is one of the rare complications associated with it. This paper will discuss about a case of HZ with subsequent osteonecrosis of maxillary bone as one of the complication

Herpes Zoster Virus Infections (HZI) occur by varicella zoster reactivation which is characterized by dorsal root ganglia or extra medullary cranial nerve ganglia inflammation. It presents with cutaneous painful and vesicular eruptions in the affected sensory nerve innervated area [1-2]. 45% of thoracic, 23% of cervical and 15% of trigeminal dermatomes are involved respectively [3]. The incidence rate is 1/1000 in young population with 5-10 fold increase rates in older population [4]. There are numerous triggering factors initiating the onset of HZ such as trauma, malignancy of dorsal root ganglia, X-ray radiation or any immunosuppressive therapy. Post herpetic neuralgia is the frequent complication of HZI. There are some developmental anomalies also associated with its complication such as irregular short roots and missing teeth, periodontitis and calcified and devitalized pulps [4]. There are also literature evidence showing HZI associated with periapical lesions and resorption of roots [5]. This paper will discuss a case of HZ infection who presented with osteonecrosis of maxillary bone on subsequent visits.

62 year male patients reported to outpatient department with the chief complain of ulcers over right side of face and mouth for past 3-4 days. History revealed that the patient was suffering from fever since 1 week which was preceded by burning sensation in the right side of the face as well as inside the mouth. Gradually vesicles appeared which ruptured to form painful ulcers. Simultaneously there was swelling over upper right side of face and orbital region. Patient visited doctor for the same and took medicine but got no relief. Medical history was non-contributory and there was no prior history of Bisphosphonate therapy or radiation therapy. On examination multiple irregular shallow ulcerations and crusts were present on the lips and the perioral skin including chin region, ala of nose, upper lip, cheek region up to temple on right side of face but not crossing the midline (Figures 1 and 2). Diffuse, erythematous, tender swelling was present over right periorbital region. On intraoral examination, diffuse multiple unilateral ulcerations of varying size were present on right side of hard and soft palate, oropharynx, buccal mucosa, buccal vestibule and labial vestibule (Figure 3). 14 were carious and tender on percussion. Based on history and clinical, provisional diagnosis of Herpes Zoster affecting the right side of face involving all three branches of trigeminal nerve were made. Patient was prescribed acyclovir (800 mg five times a day for 10 days) with anaesthetic mouth rinses. There was complete resolution of lesions both intraorally and extraorally after 10 days of follow up (Figures 4 and 5). Since patient was not willing for endodontic treatment of 14, it was extracted. Patient again reported with sharp, lancinating pain along maxillary division of trigeminal nerve on right side after 1 month of treatment. Based on history, diagnosis of postherpetic neuralgia was made and was prescribed Carbamazepine (200 mg thrice daily). Patient responded to the medication and was kept under regular follow up. During one of the follow up visit at 3 months, exposed alveolar bone over root surface of 13 was seen (Figure 6). Intraoral periapical radiograph was made of 13 but there were no radiographic changes (Figure 7). Based on history of herpes zoster infection and clinical findings, diagnosis of herpes zoster induced osteonecrosis of bone was made. Since patient was asymptomatic and there were no radiographic changes, patient was advised to maintain oral hygiene and was kept under regular follow up. After 6 months of follow up, there is no progression of lesion and no recurrences observed (Figure 8). 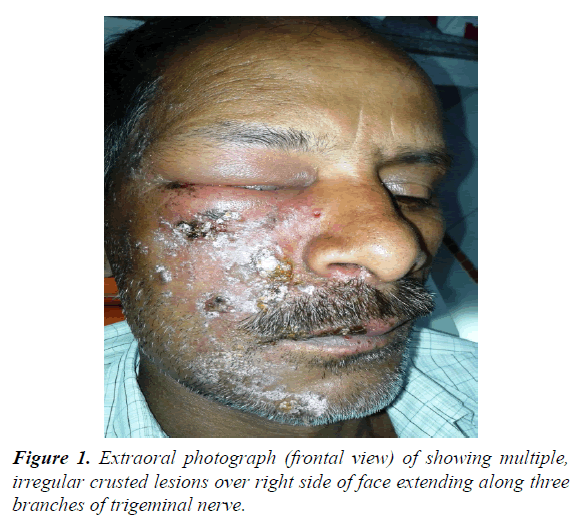 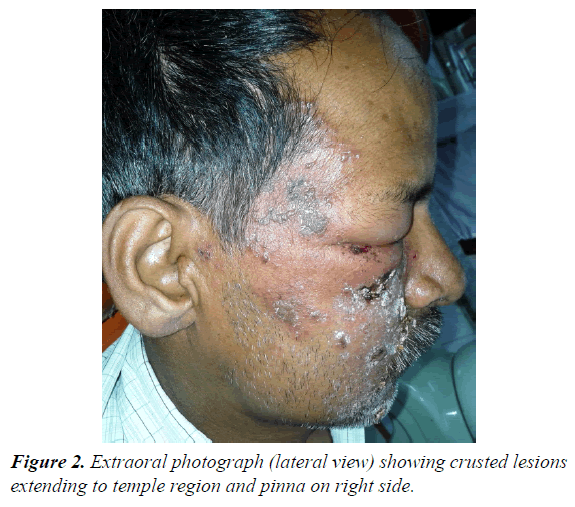 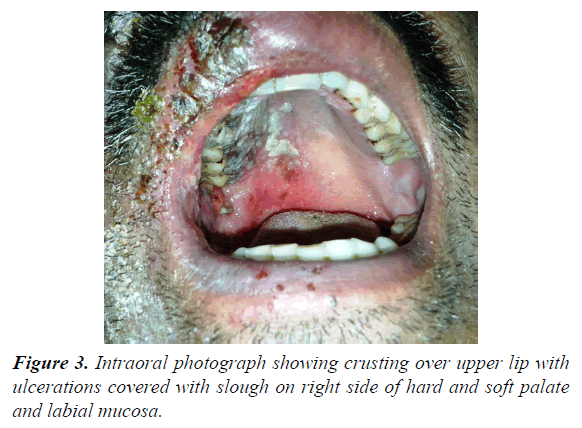 Figure 3. Intraoral photograph showing crusting over upper lip with ulcerations covered with slough on right side of hard and soft palate and labial mucosa. 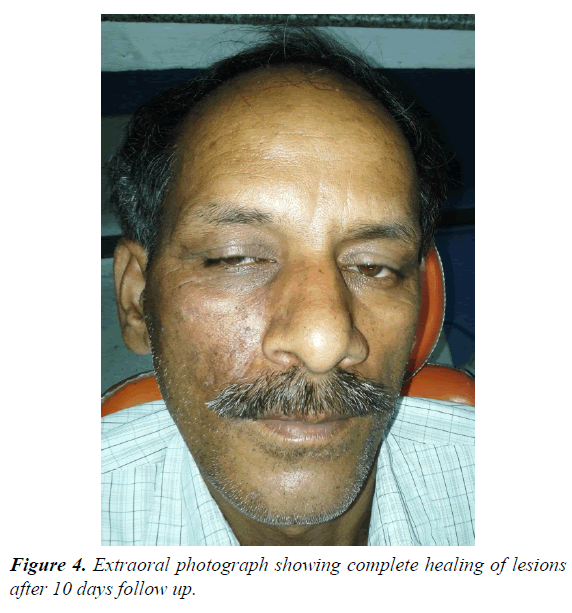 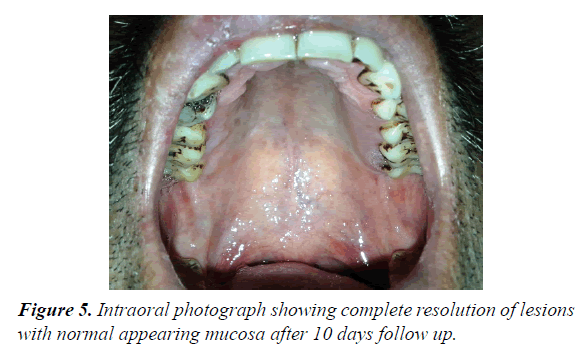 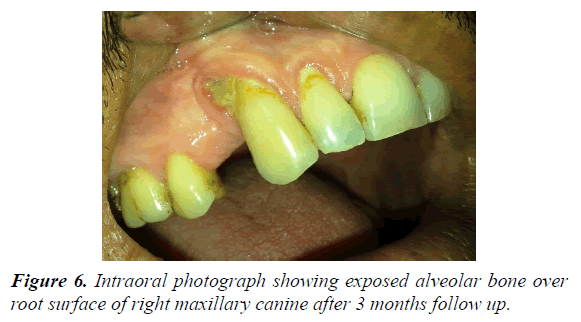 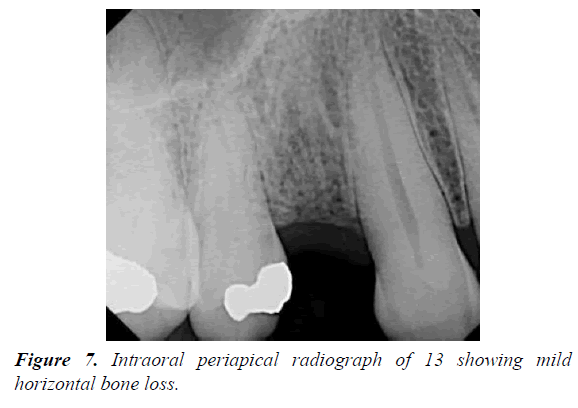 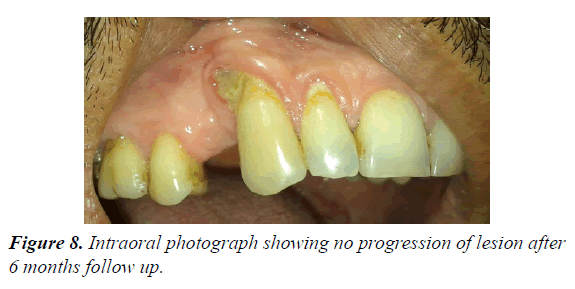 Figure 8. Intraoral photograph showing no progression of lesion after 6 months follow up.

Oral manifestations of HZ infection are present when the mandibular or maxillary divisions of trigeminal nerve are involved. HZ infection is common over 50 years of age and in immunocompromised patients such as suffering from lymphoproliferative or other malignancies, HIV infection, receiving corticosteroids or chemotherapy/radiotherapy. Few of cases have been found in young, immunocompetent, and otherwise healthy individuals. The most significant and debilitating complication of HZI is post-herpetic neuralgia. Other complications include facial scarring, motor nerve palsy, optic neuropathy, and blindness, encephalitis, and calcinosis cutis [6]. According to Dechaume et al. and Gonnet’s presented the first report to draw attention towards osteonecrosis and tooth exfoliation as one of the complication associated with HZI complication [7]. Several hypotheses have been proposed for HZI induced osteonecrosis which are described here [8].

• Local vasculitis caused by direct extension of a neural inflammatory response to adjacent blood vessels, which may cause infarction of the trigeminal vessels and lead to jawbone necrosis by triggering ischemia.

• Generalized infection in trigeminal nerves is the cause of vasculitis of periosteum and periodontium, which induces osteonecrosis and tooth exfoliation.

• Pre-existing pulpitis, periodontitis, or prior surgical procedures can induce osteonecrosis. There are no universally accepted treatment protocols for ONJ. In the absence of a defined treatment algorithm for ONJ, there is a generally accepted approach of palliation of symptoms and controlling associated infection. Treatment strategies range from conservative nonsurgical therapy to early surgical intervention [8].

• Topical antibiotic mouth rinses & systemic antibiotic therapy as & when indicated. This is consistent with the previous recommendations of the Canadian Association of Oral and Maxillofacial Surgeons (CAOMS), AAOMS, and the American Dental Association and is supported by many practitioners.

Recent literature shows successful treatment of ONJ with teriparatide & this may become a conservative treatment choice for those with osteoporosis and without cancer or prior radiation therapy to bone. Because teriparatide has been reported to facilitate osseous wound healing in the oral cavity, it may be a possible approach for patients on anti-resorptive therapy for the treatment of osteoporosis. Teriparatide should not be used in patients with cancer, a history of skeletal radiation, or with active bone metastases, because these patients are at risk for the development or advancement of bone malignancies and teriparatide should be avoided unless prospective studies demonstrate a favorable benefit-to-risk ratio for its use.

Other experimental treatment approaches found in the literature awaiting further substantiation include topically applied ozone, bone marrow stem cell intralesional transplantation, and addition of pentoxifylline and tocopherol to the standard antibiotic regimen. The latter reportedly reduced both ONJ symptoms and the amount of exposed bone. Favorable outcomes have been reported with low-level laser therapy, in conjunction with conservative and/or surgical debridement, but further confirmation is needed.

Conservative therapy should be continued as long as there is no:

• Pain that is not being controlled by conservative means.

• Patients who had anti-resorptive therapy discontinued by their oncologist because of ONJ.

Early treatment recommendations for ONJ discourage surgical intervention with conservative therapy continuing indefinitely or until there is progression of disease. However, there are now many reports demonstrating success with surgical management of these lesions. Resection of the affected bone should be extended horizontally and inferiorly to reach healthy-appearing, bleeding bone.

Promising results have also been reported with surgical debridement in combination with Platelet-Derived Growth Factor (PDGF) applied to the site in Stage 2 ONJ cases [12]. Hoefert et al. [13] suggested that longer-term preoperative antibiotics (23-54 days) resulted in improved surgical outcomes versus short-term antibiotic therapy (1-8 days). Adjunctive therapy with Hyperbaric Oxygen (HBO) in combination with surgery has been investigated with encouraging results [14-15]. Further researches are required with these innovative combination therapies prior to formalizing treatment recommendations.

In summary, in the absence of debilitating ONJ lesions, conservative therapy with optimal oral hygiene, topical antibiotic rinses, and systemic antibiotics are advised as needed for pain or infection [16].

For nonresponsive ONJ lesions, surgery is an option and includes ostectomy of the affected area with resection margins that extend into adjacent normal-appearing bone. Soft tissue closure should be tension-free with no underlying sharp edges of bone that could lead to mucosal breakdown. 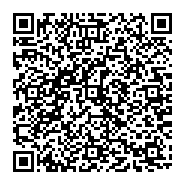