Herein, we report a rare case of a trabecular variant of thyroid follicular adenoma in a 40-year-old Japanese woman. The nodular tumor, 40 × 25 × 20 mm in size, showed extensive growth and sharp demarcation within the left lobe of thyroid gland, exhibiting entirely trabecular histological characteristics. Moreover, the atypical trabeculae were extraordinarily elongated and serpentine in form. The longest trabeculae visible in the sections were approximately 40 mm in length, arranged in irregular folds. The tumor cells showed homogenous distribution; however, the trabeculae showed irregular distribution with either dense or diffuse localization, in association with edematous stroma. No follicular structures were detected in the tumor, and no vascular and capsular invasions were observed. Immunohistochemically, tumor cells were positive for thyroglobulin, whereas laminin-positive staining was clearly visible in the surrounding trabeculae. Moreover, both amyloid A and calcitonin immunostainings were negative, and the tumor cells exhibited an extremely low labeling index of <1% for MIB-1 immunostaining; moreover, no cell membrane or cytoplasmic staining was observed for MIB-1. No signs of lymph node metastasis or malignancy were detected. We present a case of a purely trabecular variant of thyroid follicular adenomas, with extraordinarily long trabeculae. More cases of this tumor type should be identified in order to characterize its biological behavior.

According to the current World Health Organization (WHO) classification for thyroid follicular adenomas [1], the tumor cells may be arranged in trabecular, microfollicular, normofollicular, and macrofollicular patterns; frequently, these patterns may intermingle within the tumor2. The trabecular pattern frequently resembles the embryonic phase of the thyroid; hence, it may be termed the embryonal type [2]. Because of its characteristic pattern of homogenous trabecular cell growth with high cellularity, and the absence of visible colloid or follicle formation by light microscopy, the trabecular type may also resemble poorly differentiated carcinomas( PDC) [3,4,5]. However, upon higher magnifications, the PDC reveal abortive or rudimentary follicles arranged in trabecular, insular, and solid areas [6]. Then, medullary carcinoma(MC) with stromal amyloid deposition and hyalinizing trabecular tumor(HTT) [6-9] were also very important for differential diagnoses.

In the present case, tumor cells were arranged in an extraordinary elongated trabecular pattern throughout the tumor. This purely trabecular variant of follicular adenomas is rare; we present the histopathological and immunohistochemical findings, with an emphasis on differential diagnosis.

Written, informed consent was obtained from the patient in the present study, and the identity of the patient has been strictly protected.

The extirpated tumor showed clear margins with a thin, fibrous capsule (Fig. 1A). The solid tumor revealed either dense or diffuse edematous portions upon histopathological examination (Fig. 1B). The parenchymal tumor cells were homogenous and arranged in irregularly curved or folded trabeculae, which were extraordinarily elongated, almost serpentine in form (Fig. 1C). The longest trabecula observed was 40 mm in length, with folds and irregular curves. No follicles or colloids were detected. The tumor cells were homogenous, revealing no nuclear swelling, and no visible nucleoli (Fig. 1D). No mitotic figures were detected. The margin was sharp, revealing no invasion of the surrounding tissues and no daughter nodules. No vascular invasion was found. No lymph node metastases were documented. 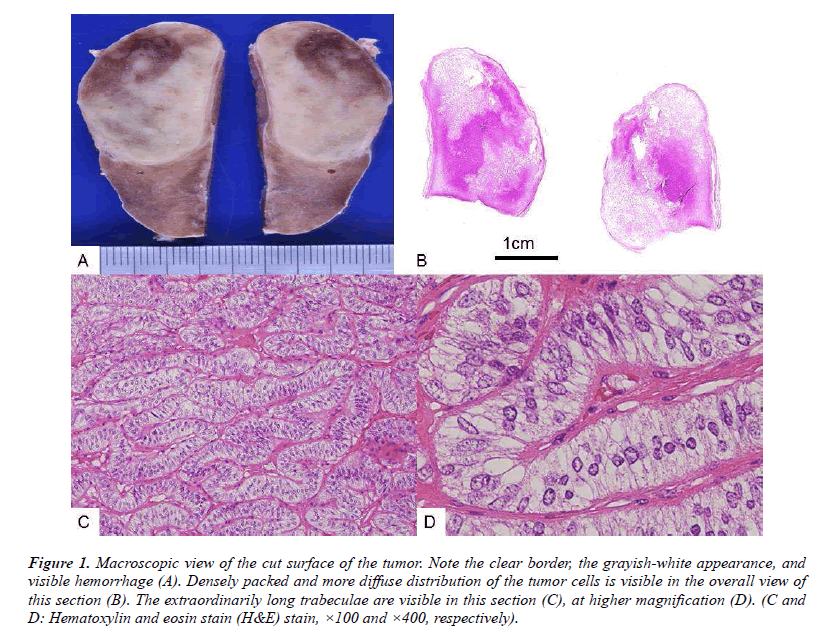 Figure 1: Macroscopic view of the cut surface of the tumor. Note the clear border, the grayish-white appearance, and visible hemorrhage (A). Densely packed and more diffuse distribution of the tumor cells is visible in the overall view of this section (B). The extraordinarily long trabeculae are visible in this section (C), at higher magnification (D). (C and D: Hematoxylin and eosin stain (H&E) stain, ×100 and ×400, respectively). 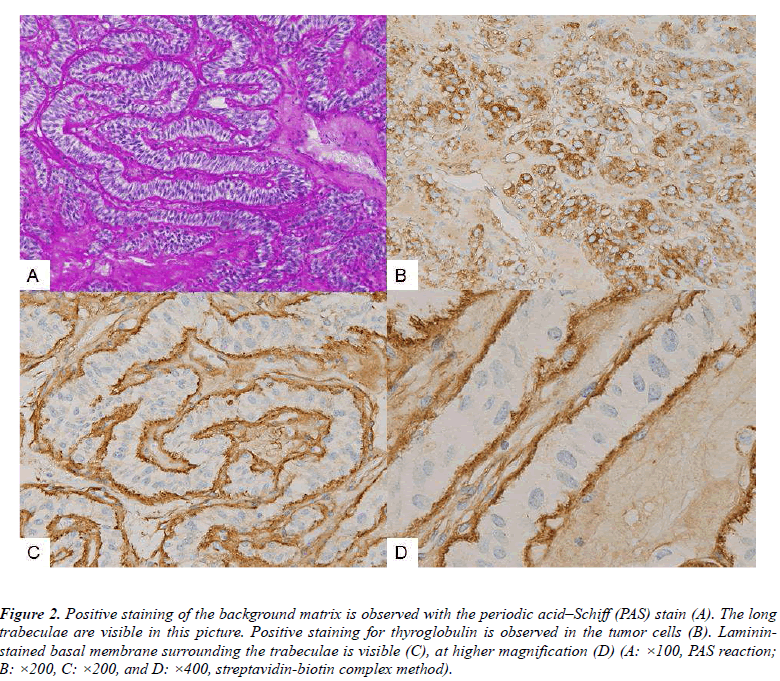 Figure 2: Positive staining of the background matrix is observed with the periodic acid–Schiff (PAS) stain (A). The long trabeculae are visible in this picture. Positive staining for thyroglobulin is observed in the tumor cells (B). Lamininstained basal membrane surrounding the trabeculae is visible (C), at higher magnification (D) (A: ×100, PAS reaction; B: ×200, C: ×200, and D: ×400, streptavidin-biotin complex method).

Based on these results, the tumor was diagnosed as a benign trabecular variant of a thyroid follicular adenoma, harboring extraordinarily long trabeculae, with a maximum length of approximately 40 mm in the section.

The major differential diagnoses for the trabecular variant of thyroid tumors included PDC [3,4,5], MC, and HTT [6-9]. Although PDC exhibits a predominantly trabecular pattern, invasion and metastases may be observed frequently, typically accompanied with enlarged nuclei and clear nucleoli. In PDC, hematogenous metastases often occur because of the presence of malignant tumor. Although no follicle or colloid was detected by light microscopy in the trabecular, insular, and solid areas of PDC3-5, rudimentary or abortive follicles were detected in the trabecular tumor cells in an ultrastructural study [11]. In the present case, no adhesion or invasion to the surrounding tissues was observed during surgery. The tumor margin was remarkably clear, and the nuclei were uniform and small, with no visible nucleoli. No recurrence or metastasis has been found, 7 months after the operation. MC is associated with amyloid deposits in the tumor stroma. However, in the present case, no such findings were revealed by immunohistochemical staining; moreover, calcitonin staining was negative. The HTT is fundamentally benign8; in addition to the standard nuclear stain, it exhibits a characteristic pattern of immunostaining with MIB-1, specifically localized at the cell membrane and in the cytoplasm [6,7]. The positive cell membrane staining has been reported to be linear in pattern7. This divergence in staining patterns was utilized to differentiate an HTT from a papillary carcinoma, both of which contained nuclear inclusions7. However, this characteristic pattern of MIB-1 immunostaining was not observed in the present case. To be considered malignant, >10% of the follicular adenoma should show MIB-1 immunostaining of the nucleus; however, in the present case, MIB-1 immunostaining was <1%. Moreover, ultra-structurally, HTT was reported to contain abundant basal lamina-like material in the stroma, which was immunopositive for collagen type IV antibody [7]. In this point, the present case also differs from HTT.

Although the general characteristics of these three disease subtypes were similar to those of the trabecular type of thyroid adenomas, the tumor in the present case did not harbor all the aforementioned specific characteristics of any one specific subtype. The tumor in the present case was benign, and showed no invasion, metastasis, and cellular atypia, demonstrating a clear margin. This purely trabecular variant of thyroid follicular adenomas is rare. Some cases of thyroid follicular adenomas might possess the latent ability to metastasize; therefore, information should be gathered on this variant in order to characterize its biological behavior in detail.