Majumdar A, Upadhye V and Harinath BC*

An inhouse developed SEVA TB ELISA using cocktail of Mycobacterium Excretory-Secretory antigens (ES-31, ES-43 & EST-6) for antibody detection and their affinity purified antibodies for antigen detection was prospectively evaluated during January-August 2008 in TB suspected patients in tertiary hospital located in rural area. Antibody or antigen positivity is considered as ELISA positive. 238 suspected cases of pulmonary and extra-pulmonary tuberculosis were screened. ELISA test showed 100% correlation (12 patients) with AFB positivity. ELISA test also showed 100% correlation (42 patients) with anti-tubercular therapy (ATT) treated cases. 110 out of 238 cases showed negative ELISA test and these cases were also not recommended ATT. 86 out of 238 cases were neither AFB positive nor ATT treated, but these cases were ELISA positive. These cases may possibly have dormant infection and need further follow up for showing disease, if any, in due course of time and its usefulness for confirmation of clinical suspicion. This study has shown usefulness of SEVA TB ELISA in diagnosis of suspected patients of Pulmonary and Extrapulmonary tuberculosis

Tuberculosis (TB) is one of the curable infectious diseases, remain the leading disaster in front of the world inspite of availability of treatment. Based on surveillance and survey data, WHO estimated that 9.2 million new cases of TB occurred in 2006, including 4.1 million new smear-positive cases. India, China, Indonesia, South Africa and Nigeria rank first to fifth in terms of incident cases. Among these new cases around 7.7% were HIV-positive [1]. Latent tuberculosis is another burden on TB control programme. Currently, about 2 billion people worldwide are believed to have latent TB. Of those, 8 million to 9 million will develop TB each year and 1.6 million of them will die [2]. The successful control of TB depends on early detection of cases and effective treatment. [3,4].

Diagnosis of TB using acid-fast staining of sputum smear or standard culture is considered as the ‘gold standard’, however the sensitivity of detection has been shown to be only 40-75% and hence clinicians have to treat the suspected patient based on clinical judgment [5-7]. Emp-irical treatment increases public health expenditure and the risk of drug side-effects that may be fatal [8].

The advent of the nucleic acid amplification test seems to help in the diagnosis of TB, however faced with problems of contamination and sensitivity [9]. Further, this technique is expensive, time consuming and requires special expertise and equipment. Hence, there is an urgent need for improved and easily accessible diagnostic methods that are simple, rapid, inexpensive, reliable and suitable for use in the developing world.

Serological tests are relatively simple to use, inexpensive and easy to interprete. As they do not depend on the site of infection, serological tests may be better for detecting extra-pulmonary TB and for children or uncooperative patients, among whom collection of clinical samples may be difficult. Many groups have explored culture filtrate antigens of Mycobacterium tuberculosis (M.tb.) in ELISA for serodiagnosis of TB [10,11]. In earlier studies from our laboratory, we have shown diagnostic usefulness of M. tb. excretory secretory (ES) antigens ES-31, ES-41 and ES-43 in antibody detection by sandwich penicilinase ELISA (Pen-ELISA) [12-15]. Antigen EST-6 containing 38 and 41kDa proteins was also explored for antibody detection by Pen-ELISA [16]. A cocktail of ES-31, ES-41 and ES-43 antigens had shown improved sensitivity of Pen-ELISA compared to single ES-31 antigen in antibody detection in pulmonary TB (PTB) [17]. Further, a cocktail of affinity purified antibodies against ES-31, ES-43 and EST-6 antigens was explored for circulating free and IC antigen detection in TB by Indirect ELISA [18]. Hence we made a prospective study to find the usefulness of this inhouse developed SEVA TB ELISA using cocktail of antigens (ES-31, ES-43 and EST-6 antigens) for antibody detection and their immunoglobulins for antigen detection in TB suspected cases in tertiary hospital located in a rural area.

The present prospective study was carried out for the duration of 8 months, between January 2008 and August 2008. Patients attending Kasturba Hospital of Mahatma Gandhi Institute of Medical Sciences (Tertiary hospital), Sevagram, located in rural India, who were suspected of having tuberculosis on clinical examinations and other laboratory investigations participated in the present study. Sputum microscopy and culture test for AFB are routinely done by Microbiology Department of this Institute. Sera samples were received from 238 patients, out of which 154 were suspected for having PTB while 84 for EPTB. EPTB patients belonging to different forms of EPTB namely bone and joint TB (40), genitourinary TB (17), ocular TB (11), abdominal TB (9), tuberculous meningitis (4) and tuberculous lymphadenopathy (3). Out of these 238 cases, 12 cases were AFB positive. These 12 bacteriologically confirmed cases included 11 PTB cases and 1 case of TB lymphadenitis. Out of 238 cases, 42 cases were administered anti-tubercular treatment (ATT) treated.

Sera samples were stored at our Center’s sera bank in 0.5 ml aliquots at -200C with 0.1% sodium azide until use. Sera samples from healthy individuals with no history of TB stored in the sera bank, served as healthy controls. All cases included in this study had history of BCG vaccination. The study was done prospectively in blinded manner in which clinical diagnosis was not available to the laboratory personnel prior to the assay. In the present study, each serum sample had been assayed in duplicate.

Case selection and diagnosis of EPTB

Clinical history, physical examination, baseline laboratory investigations [hemogram, tuberculin skin test, chest skigram, urinanalysis], microbiological (AFB smear and culture)], histological and cytological (FNAC) investiga-ions, ultrasound or computerized tomographic scanning (CT) depending upon the location of the infection in patients, clinicians high degree of suspicion of TB depen-ng on clinical sign and symptoms and response to ATT or ATT treated were considered as the basis for selection of cases.

Indirect Penicillinase ELISA was performed for detection of antibody using cocktail antigen. Optimum individual antigen concentration of 1ng per stick was used in this assay. In brief, 5μL of optimally diluted antigen (0.6μg protein/ml) was applied to Cellulose acetate membrane squares fixed to a plastic strip and used along with optimally diluted human serum (1:600). Serum incubation was done at 37°C for 1 hr. After washings, strips were incubated with anti-human IgG Penicillinase conjugate (1:1000) at 37°C for 30 minutes. Finally, strips were incubated with blue color starch-iodine-penicillin ‘V’ substrate at least 5 min earlier than the negative control was considered as positive.

Sandwich penicillinase ELISA was performed for detection of circulating free and immune complexed antigen using cocktail of affinity-purified antibodies to ES-31, ES-43 and EST-6 antigens. Optimum individual antibody concentration of 1μg protein per stick was used in the assay. In brief, 5μL of optimally diluted antibody (0.6 mg protein/mL) was applied to cellulose acetate membrane squares fixed to a plastic strip and used along with optimally diluted human serum (1:300). Serum incubation was done at 37°C for 1 h. After washings, strips were incubated with goat anti-cocktail IgG penici-llinase conjugate (1:1000) at 37°C for 1 hr. Finally, strips were incubated with blue color starch-iodine-penicillin ‘V’ substrate at least 5 min earlier than the negative control was considered as positive.

For detecting IC antigen, serum samples were pretreated with Glycine-HCl buffer (0.1mol/L) followed by heating at 65°C for 15 minutes. 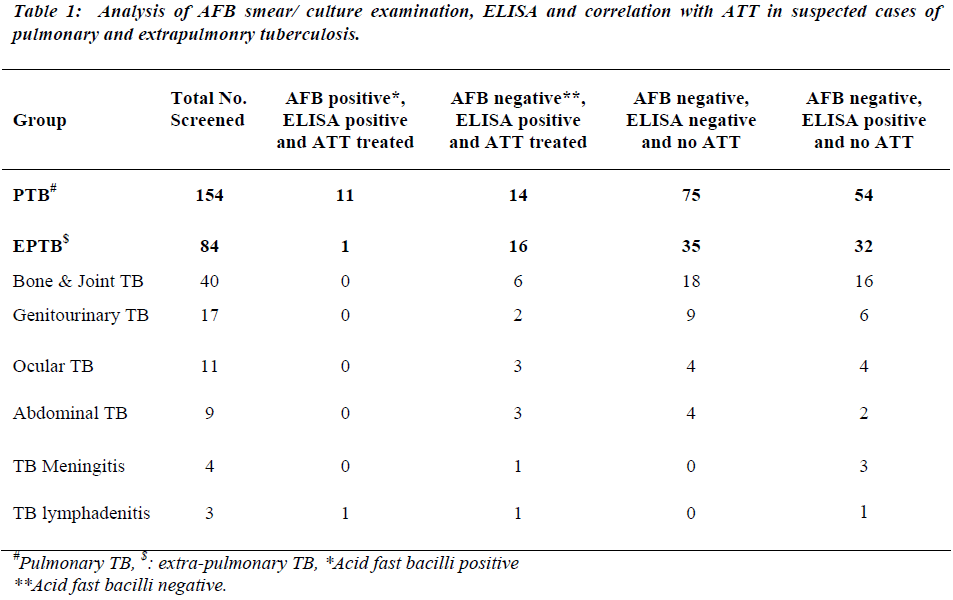 Table 1: Analysis of AFB smear/ culture examination, ELISA and correlation with ATT in suspected cases of pulmonary and extrapulmonry tuberculosis.

In current clinical practice diagnosis of TB depends on clinical information and various laboratory tests including smear, culture and FNAC for AFB, chest radiology, computer tomography, ultrasonography and response to ATT. Although AFB smear microscopy and culture are valuable for confirmative diagnosis of tuberculosis, low bacillary load, extent of TB disease extrapulmonary site of the infection do make the AFB test undependable. Further, It is very difficult to obtain sputum specimen in children. Based on suspected clinical symptoms and time consuming culture methods there is always a delay in dia-gnosis. Therefore immunodiagnosis seems to be ideally suited as a diagnostic method. Serodiagnostic tests like ELISA can show promise because of their ease of performance in field laboratories and cost-effectiveness.

Over a period of decade, our laboratory reported usefulness of various mycobacterial excretory secretory antigens in the diagnosis of TB by ELISA. Cocktail of different antigens has shown to be more useful than single antigen assay [20]. Assay for detection of free circulating cocktail antigen (ES-31, ES-43 and EST-6) was found useful for PTB cases with 91% sensitivity and 97% specificity for sputum positive AFB positive cases [18]. In EPTB and latent TB cases the diagnosis is difficult due to the insensitive sputum and culture methods. This cocktail antigen assay showed 70 % sensitivity and 100%specificity in EPTB cases [20].

In the present study the inhouse developed Pen-ELISA test was evaluated prospectively for the diagnosis of PTB and EPTB cases attending Kasturba Hospital, a tertiary hospital located in rural area. Assay showed 100% correlation with AFB positivity as well as with ATT treatment. A total of 42 cases of PTB and EPTB were administered ATT. Out of the 12 AFB positive cases, 11 cases were of PTB and one case was of EPTB. Based on other clinical investigations and ELISA positivity, 31 out of 84 EPTB patients were treated for TB showing the usefulness of ELISA test in extrapulmonary tuberculosis. 110 out of 238 cases (46.21%) cases were suspected of having tuberculosis were negative for TB by Pen-ELISA and were not treated for TB. 86 out of 238 cases (36.13%) were neither AFB positive nor ATT treated, but these cases showed ELISA positivity. The probable reason of this finding might be the low sensitivity of sputum microscopy and mycobacterial culture [8]. At concentra-tions below 1000 organisms per ml, the chance of observing bacilli in a smear becomes less than 10% while detection limit of mycobacterial culture is around 100 organisms per ml [21]. Even the smear examinations has proven less sensitive in HIV-TB coinfection due to absence of cavity formation secondary to poor immune status, resulting in lower bacillary count [22]. Expanded case definition and response to treatment (RTT) have been advocated to enhance the diagnosis of PTB and EPTB in HIV infected adults in resource limited settings [23,24].The other probable reason might be that these cases may be harboring latent TB infection. These suspe-ctted TB cases need further followup for showing clinical disease if any in due course of time.

Thus, this inhouse developed simple and less expensive SEVA TB ELISA has shown to be user friendly and may be used as an adjunct test with smear microscopy or culture techniques for routine screening of patients suspected of pulmonary and extrapulmonary tuberculosis. AFB negative but ELISA positive patients may be followed and can promptly be administered treatment with the development of the disease.

This study was supported by a Tropical Disease Research Grant from Kasturba Health Society, Sevagram.We thank Mr. DS Mehta, President of KHS and Dr (Ms) S Chhabra, Dean of MGIMS for their keen interest and encourage-ment for this study. The technical assistance of Mrs S.Ingole and Mr.Sagar is appreciated.