Introduction: Acquired tracheomalacia could develop to Trachoeoesophageal Fistula (TEF) by the damage of tracheal and oesophageal wall secondary to the long term endotracheal or tracheostomy tubes. Most of Amyotrophic Lateral Sclerosis (ALS) patients they need mechanical ventilation support with tracheostomy and commonly experience inappropriate management of tracheostomy tube, leading to complications like tracheomalacia, TEF. Strategies for the TEF management are controversial, but several operations have been preceded. We report a successful case of the novel approach of management for the tracheomalacia with inoperable TEF in ALS patient.

Case presentation: A 62-year-old Asian male patient had tracheostomy after diagnosis of ALS and was supported by 24hrs of mechanical ventilator since 2011. He was diagnosed as tracheomalacia with TEF 2 years later and had primary closure and muscular rotation flap on oesophageal and tracheal defect. Nonetheless, he was diagnosed as the recurrent tracheomalacia with TEF 10 months after the operation. As, the condition of trachea was not enough to endure re-operation, we tried an non-surgical approach using a Amplatzer Vascular Plug II (AVP II, St. Jude Medical, Plymouth, Minnesota, USA) for the TEF closure instead of operation and successfully managed recurred TEF without any complication.

Conclusions: We report a rare care of inoperable recurrent TEF in ALS patient. As recurrent TEF after previous operation should be considered more carefully, using a vascular plug for the management of recurrent inoperable TEF can be considered as treatment of choice especially for the patients who are under vulnerable conditions.

Acquired Tracheoesophageal Fistula (TEF) is caused by a malignant tumor or non-malignant factors such as infectious diseases and iatrogenic injury including cuff related injury and complications from prior operation on trachea or oesophagus [1-3]. Some of the known major risk factors of TEF are overinflation of tracheostomy cuff; excessive motion of the Tracheostomy Tube (TT), direct touching the posterior wall of trachea by the tip of TT, tracheostomy cuff exerted against a firm nasogastric tube, and repeated aspiration injury [3].

The condition underlying tracheomalacia might accelerate complications by losing tracheal support framework, and the major cause of acquired tracheomalacia is the over-inflation of endotracheal and TT cuff [4]. It can cause the development of TEF by ischemic necrosis of the trachea membrane and the anterior wall of the underlying oesophagus [1].

Most of Amyotrophic Lateral Sclerosis (ALS) patients are no longer dependent on Non-Invasive Ventilation (NIV) due to severe saliva aspiration. Eventually they need mechanical ventilation support with tracheostomy and commonly experience inappropriate management of TT, especially over inflation of tracheostomy cuff. Such experiences easily cause tracheomalacia and deteriorate into TEF as fore mentioned.

Strategies for the TEF management are controversial, but several operations such as oesophageal exclusion to separate between air ducts and oesophagus, temporal stent insertion on tracheal or oesophageal, and direct fistula closure have been preceded [2]. Furthermore, a few cases could be hard to undergo surgical management secondary to poor general condition of patients or recurrent TEF after their pervious operations [2,5].

A 62-year-old Asian male patient who complained of the abdominal distension was transferred to our hospital. He has been assisted with 24 h of mechanical ventilation since he was diagnosed as ALS on 2008. He needed a maximal assist for all Activities of Daily Living (ADL) and received a nutritional support through PEG tube.

On his past history, he transferred to our hospital on July 2013 because of the dyspnoea and chest discomfort for few months. He was diagnosed as pneumonia and tracheomalacia with TEF by bronchoscopic exam and chest Computed Tomography (CT).

On history taking, the caregiver used to inflate additional air on TT whenever the patient complained of dyspnoea and symptom seemed to be alleviated. We confirmed tracheomalacia with TEF secondary to the chronic overinflation on TT and referred to the department of thoracic surgery. The patient underwent TEF primary closure and muscular rotation flap on oesophageal and tracheal defect. After successful operation on TEF, we replaced the endotracheal tube with normal cuff pressure, and he started a home nursing care after he discharged without any complication.

Ten months later, the patient started to complain of the abdominal distension. Few days later, he admitted to our clinic for evaluating the previous symptom. On admission day, X-ray showed aerophagia so that chest CT was taken under suspicious of the recurrent TEF. It showed no significant interval change with normal tip position of TT. Two days later, we performed bronchoscopic exam after endotracheal tube was removed. However, we couldn’t find any evidence of recurrent TEF except stitch from prior operation on upper trachea. In sequence, we performed the upper gastrointestinal endoscopy to rule out recurrent TEF. There was no different finding except stricture and narrowing on upper oesophageal sphincter secondary to the previous TEF operation. However, we couldn’t still rule out of the recurrent TEF so that we checked gastrointestinal endoscopy again by using contrast media to confirm for any possible leakage. After all, we found the recurrent TEF on 3 cm above postoperative TEF site through the leakage of gastrografin and referred to the thoracic surgeon (Figure 1). However the surgeon hesitated for re-operation, because not only his tracheomalacia was so progressive and vulnerable to endure reoperation but also had a high risk of postoperative complication. We had to find other non-surgical options for TEF closure because TEF was a life threatening disease, but the patient was in inoperable state. So we decided to close the TEF by AVP II, which was never tried for TEF closure except for occluding medium and large vessels. AVP II is a multi-layered, multiple-lobed Nitinol (Nickel-titanium) mesh design provides for rapid embolization. 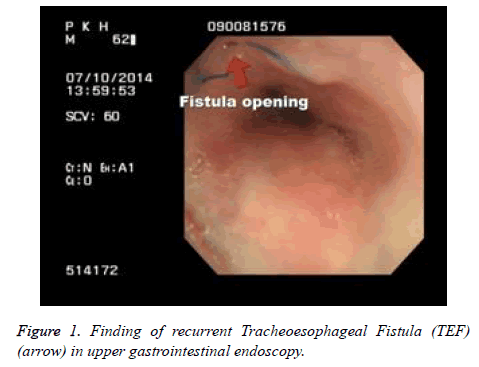 Six days after his admission, the first attempt to occlude TEF through fistulogram was tried. The intervention radiologist confirmed TEF through fistulogram at first (Figure 2A), and approached to the fistula through trachea and placed an 8 mm AVP II on fistula site without leakage. However, two weeks later, the patient started to complain of the abdominal distension again. We auscultated air bubble sound on his abdomen whenever he inhaled through mechanical ventilation, and aerophagia was reappeared on X-ray. Immediately we confirmed re-opening of TEF by migration of the 8 mm AVP II and place an additional 10 mm AVP II on it. Small amount of histoacryl-lipiodol (1:1) mixture was injected surrounding AVP II to prevent migration. Post procedural fistulogram was undergone and complete occlusion of recurrent TEF was confirmed (Figure 2B). A reinforced 8.0 mm cuffed tracheal tube with 40 mmHg cuff pressure was applied on his tracheostomy, and he was discharged from the hospital 27 days after admission without any complication. He was followed up monthly and we couldn’t find any complication more than 6 months so far. 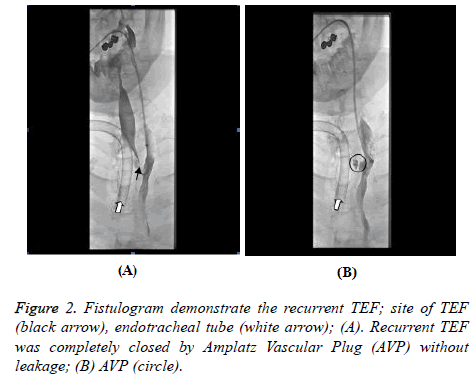 Trachomalacia is airway compression resulting from tracheal collapse secondary to the losing elastic and/or cartilaginous system [6]. The most frequent cause of acquired tracheomalacia is resulted by endotracheal cuff or TT, especially by long- term exposure to high cuff pressure [1]. Although safely recommended cuff pressure are normally less than 20 mmHg to decrease the mucosal injury, the caregiver tends to gradually increase the cuff pressure for adequate sealing and preventing leakage during mechanical ventilation like this case [4,5]. It eventually leads to TEF which occurs when posterior membranous trachea and oesophageal anterior wall are ischemic necrosis before the margin closure by granulation tissue and scar contracture [1].

Several different approaches to the management of TEF have been suggested, but they are still controversial [7]. The most common strategy for repairing TEF has been known as surgical management under general anesthesia, however, it is challenging due to high postoperative complications such as respiratory failure and pneumonia, mortality, and recurrence. Also inoperable cases due to poor medical condition are quite commonly reported [7]. Few non-operative techniques for recurrent TEFs are reported. Sporadic successes by using endoscopic cauterization with small crystals of sodium hydroxide [8]. Tracheal and/or oesophageal stent implantation have been used for the endoscopic treatment of the fistula in patients with surgical contraindication [9]. However, it is a conservative treatment prior to surgery and should be removed sooner or later. Furthermore, intratracheal stent implantation has reported severe complications including aggravation of tracheomalacia by airway infection, bronchial wall necrosis, occlusion by excessive growth of granuloma tissue, and stent breakage or migration [10].

The disease of TEF deteriorated by tracheomalacia is life threatening and is hard to manage. Furthermore, the management of ALS patients who were diagnosed as recurrent TEF after previous operation should be considered more carefully, because those ALS patients need long term assistant of mechanical ventilation with TT and they are usually under vulnerable conditions. Although there has been no attempt to use a vascular plug for the management of TEF so far, it has been known as the most specialized device for occlusion of medium and large vessel with persistent occlusion [11]. Also it has a radiopaque platinum marker to ensure high visibility under fluoroscopy can it easily be applied by self-expanding feature with high resistance to migration which could overcome the limitations of inserting stent [11].

In this case, the ALS patient diagnosed as TEF deteriorated by tracheomalacia, which was caused by chronic over-inflation of tracheostomy cuff, and TEF recurred even after the previous primary closure and muscular flap operation. The condition of trachea was so vulnerable due to the tracheomalacia, and experienced thoracic surgeon was reluctant for re-operation to resolve recurrent TEF. The new challenge to close TEF by using AVP was tried twice, through approaching trachea lumen. After all, the novel approach of non-surgical management using AVP for the recurrent TEF was succeeded in an inoperable ALS patient, and it has been maintained without any complication over 6 months.