Tuberculosis is an infectious disease caused by a bacillus called Mycobacterium tuberculosis. It can lead to death in untreated and inappropriately treated patients particularly in countries with low income. Therefore, early diagnosis of the disease not only increases treatment success, but also reduces death rates. Today, due to high classification and diagnosis rates, specialist systems have become an important tool in diagnosis of the disease. In this study, support vector machines (SVM), which is a machine learning technique was used for preliminary diagnosis of tuberculosis disease for the first time. A recognition system that was developed with the properties included in patient reports obtained from a local hospital was tested for its performance. The results indicated performance of the designed system was quite successful and that it could be used in diagnosis of the disease. Obtained diagnostic results were compared with similar studies using different specialist systems on this disease, and it was observed that our results were better.

Tuberculosis disease manifests itself if tuberculosis microbes get active and start to reproduce after entering the body by various ways. When left untreated, the disease causes damage at the affected organ and can lead to death.

Tuberculosis is present in all countries worldwide. Today, it is still the most fatal contagious disease caused by a single microbe. Annually 9.2 million people contract this disease, whereas 1.6 million die because of it. It comprises 2.5% of all diseases and 26% of preventable deaths in the world. Number of tuberculosis patients tends to increase worldwide (WHOWorld Health Organization). It is estimated that 12-15 million people in Turkey are infected, that is, they carry the tuberculosis microbe which has not caused disease yet. Approximately ten percent of these people will suffer from tuberculosis in some period of their lives.

After tuberculosis microbes enter the body, time to develop disease and chance of developing the disease vary among individuals. Those with lower body resistance and small children are most likely to develop the disease. The disease can develop soon after the microbe is contracted, or it can manifest itself after decades [1].

Symptoms of the disease generally start mild and progress slowly. For this reason many patients delay attending to a physician. Some patients attribute their coughing to smoking or another reason, and do not attend a physician. This condition can lead to wrong diagnosis and treatment.

Patient complaints and findings on chest X-ray raise suspicion for the disease. In suspected cases, definitive diagnosis of tuberculosis relies on demonstration of the bacillus in microscopy and culture in growth media. Sputum or rarely some other samples obtained from the patient are examined in the laboratory and the definite diagnosis is made [1-8].

The most important advantage of Support Vector Machines [9,10] is that they resolve classification problem by converting it to their own squared optimization problem. Thus, number of processes during learning period for solving the problem is reduced, and it takes less time to reach resolution compared to other algorithms [11]. It provides great advantage particularly for high-volume datasets. Furthermore, it is more successful than the other algorithms regarding classification performance, computing complexity and practicability, since it is optimization based [12].

In this study, we developed a system that diagnoses whether a patient has tuberculosis using database [1-6] established with SVM algorithm earlier. We compared obtained results to other studies which used same data with different algorithms for diagnosis of tuberculosis

There are few studies related to automated diagnosis of tuberculosis using different artificial intelligence techniques. Most of these studies have high classification accuracy rates. These studies are mentioned below:

Elveren and Yumusak used multilayer neural network (MLNN) with two hidden layers and a genetic algorithm for diagnosis of tuberculosis. They obtained 94.88% success rate in their study [14].

Dongardive et al. used the identification tree (IDT) for diagnosis of pulmonary tuberculosis and achieved 93% success rate in diagnostic accuracy. They used 250 patient data in their study in accordance with clinical data that they obtained from a local hospital in Mumbia [15].

Er et al. used multilayer neural network algorithm which is an artificial neural network model, for the diagnosis of tuberculosis using our same dataset in 2010. They used 150 patient data in their study and they achieved 94.88% success rate in diagnostic accuracy [4].

In their study in 2010, Er et al. used multilayer neural network algorithm which is an artificial neural network model, for the diagnosis of tuberculosis. They used 38 parameters present in patient discharge reports of 357 infected and normal patients that they obtained from a local hospital as input, and designed the output as either tuberculosis is present or absent. They achieved 95.8% success rate in diagnostic accuracy [5].

Ucar et al. used ANFIS (Adaptive-Network-based Fuzzy Interference System), which is a mixture of artificial neural network and fuzzy systems, with 503 different disease data for diagnosis of tuberculosis. They achieved 97% classification success with the help of ANFIS [16].

In this section, we describe the SVM developed by Cortes and Vapnik in 1995. On the basis of statistical learning theory, SVM were proposed for classification and regression purposes [17-20]. They have proven good capabilities for the classification of complex and large datasets [21].

SVM is a statistical classification method originally designed for binary classification. Given a set T={(X,Y),......,(Xm,ym)} of m training data, where Xi ϵ Rn representing the with training data and yi ϵ {-11} the class label of, SVM provides the optimal hyperplane f(x)=wT x-b that separates two classes. When the training data are linearly separable, this hyperplane separates two classes with no training error, and maximizes minimum distance from the training data to the hyperplane. In order to maximize this minimum distance, we need to classify correctly the vectors xi of the training set into two different classes yi, using the smallest norm of coefficients w. The maximum hyperplane problem can be formulated as the following Quadratic Programming (QP) optimization problem [21]: 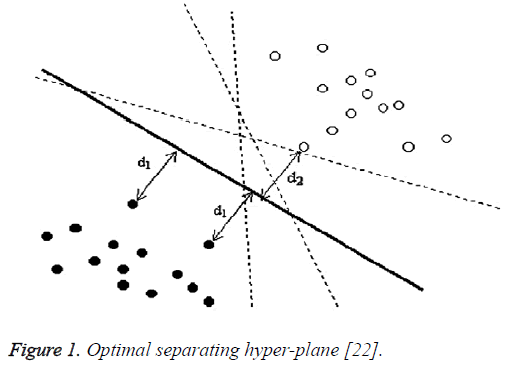 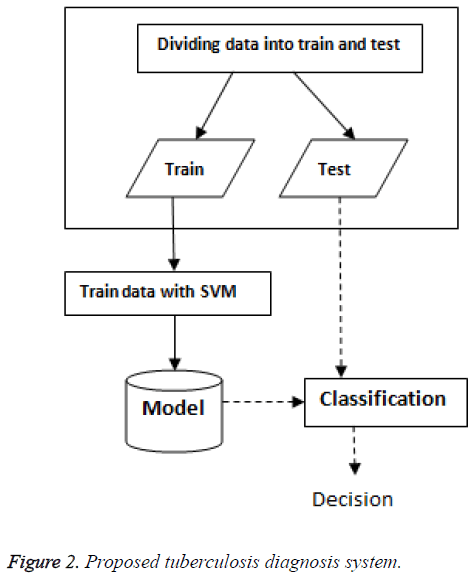 In the beginning, the database is split into training-test partitions: The training data is used to create the model for training. After obtaining the predictive model, we conduct the prediction on each testing data.

It is one of common performance measure in the literature defined as correct classified instances divided by the total number of instances with using different (input-output numbers) dataset [13].

As it is seen in the same table, we achieved 96.68% successful diagnostic accuracy rate using SVM method in this study. Furthermore, we saw that we achieved better and acceptable results than both MLNN and the other methods, namely PNN, LVQ, GRNN and RBF. These results can be explained by the effectiveness of SVM for tuberculosis diagnosis.

By way of conclusion, the following results should be mentioned:

In general, the classification accuracy obtained by this study is close to those obtained by reference studies [4-5,14]. The SVM not only present high accuracy rate but also reduces the training time. It is obtained that using SVM is a successful way to diagnose tuberculosis.

In this paper, we proposed the use of SVM for tuberculosis diagnosis. Experimental results are encouraging. It can be seen that SVM methods bring a significant performance to reach 96.68% with only a few minutes of runtime necessary for training. The results were also compared with the previous studies. The classification accuracy obtained by this study using SVM was better than those obtained in the previous studies. We can say that SVM could be successfully used for diagnosis of tuberculosis. In conclusion, practical implications of this study would be beneficial for physicians for the diagnosis of tuberculosis. This kind of systems could be directly used for prediction of the disease when used routinely in hospitals where there are no specialist doctors.