Tissue Factor Pathway Inhibitor 2 (TFPI2) is a serine protease inhibitor; it plays an important role in the degradation and remodeling of Extracellular Matrix (ECM). The degradation and reshaping of ECM is the basic steps of tumour growth and metastasis, angiogenesis, cell migration, and normal physiological processes. Therefore, TFPI2 plays a key in cancer, while it often silence by its promoter methylation. This study aimed to conduct a meta-analysis to access the relationship between TFPI2 promoter hyper-methylation and Colorectal Cancer (CRC). A detailed search of the literature was made using PubMed, Cochrane Library, Excerpta Medica Database (Embase), China National Knowledge Infrastructure (CNKI) and Web of Science for related research publications written in English and Chinese. The methodological quality of the studies was also evaluated. The data were extracted and assessed by two reviewers independently. Analyses of the pooled data were performed. Odds Ratios (ORs) were calculated summarized. A final analysis of 1,125 CRC patients from 13 eligible studies was performed. The pooled OR from 13 studies was OR=37.31 (Confidence Interval (CI)=22.06-63.12, p<0.00001). Aberrant TFPI2 hyper-methylation was significantly higher CRC than in normal control. This present study observed that TFPI2 hyper-methylation was significantly higher in CRC than in normal controls, which suggest that TFPI2 hyper-methylation is associated with an increased risk of CRC.

Colorectal Cancer (CRC) is one of the most malignant types of cancers. In the developed countries, CRC is the second most frequent cancer that leads to death [1]. Currently, there are about 1.25 million patients diagnosed with CRC, and more than 600,000 patients would die from CRC every year in the world [2]. Surgery can be used to extract the tumor if no lymph-node or distant metastasis, while the recurrence rate after surgery remains high [3]. Therefore, investigation of the mechanism of initiation and progression and identification of diagnostic markers are still needed in the treatment of CRC.

Tissue factor pathway inhibitor 2 is a protein that in humans is encoded by the TFPI2 gene. It is a serine protease inhibitor and plays an important role in the degradation and reshaping of Extracellular Matrix (ECM) [4]. The degradation and reshaping of ECM is the basic steps of tumor growth and metastasis, angiogenesis, cell migration, and normal physiological processes [5]. Studies have shown that with the progress of the breast cancer, colon cancer, pancreatic cancer, stomach cancer, laryngeal cancer, kidney cancer and other malignant tumor, the expression of TFPI2 is declining, and thus enhances the aggressivity of tumors. Other studies have confirmed that down-regulated expression of TFPI2 may have closely related with its promoter methylation. Therefore, DNA methylation of TFPI2 may promote tumor cell migration [6]. However, its role in CRC and its clinical significance have not been thoroughly investigated. The present study reviews and updates the published clinical investigations regarding the effect of TFPI2 promoter methylation on patients with CRC.

Searching PubMed, Cochrane Library, Excerpta Medica Database (Embase), China National Knowledge Infrastructure (CNKI) and Web of Science to identify studies by twelve 2015 using the search terms (“colorectal cancer” or “colon cancer” or “colorectal carcinoma” “colorectal tumor” or “colon tumor”) and (“hypermethylation” or “epigenetic” or “methylation”) and (“tissue factor pathway inhibitor 2” or “TFPI2” or “TFPI-2” or “REF1” or “PP5”). Conference abstracts were not selected for this analysis if they contain insufficient data. After the exclusion of redundant and/or irrelevant publications from the different databases, the fulltext versions of the remaining papers were estimated against exclusion and inclusion criteria (see the following paragraph), their reference lists searched for additional relevant articles. All searched data were retrieved twice.

The four inclusion criteria were as follows: 1) original study and the diagnosis of CRC was based on histopathology, 2) TFPI2 methylation evaluated in the circulation and/or primary CRC, 3) research revealed the relationship between TFPI2 methylation and CRC clinicopathologic parameters, 4) the subjects in every study comprised of CRC patients and healthy controls. The fore exclusion criteria were: 1) letters, reviews, case reports, conference abstracts, editorials, expert opinion; 2) not human studies; 3) not CRC studies; 4) and all in vitro/ex vivo studies.

Two authors independently reviewed and extracted the data from eligible studies. Decisions were made, and disagreements about study selection were resolved, by discussion with a third reviewer. The two authors reviewed all of articles that fitted the inclusion criteria. The following information was recorded for each study: the first author’s name, year of publication, sample source, number of cases, clinicopathologic parameters, methylation detection method, methylation rate, and follow-up. Data for study characteristics and clinical responses were summarized and transferred into table format. The heterogeneity of investigation was evaluated to determine whether the data from the various studies could be analysed in a meta-analysis.

Analysis was conducted using R Software (R version 3.1.2). The strength of the association between TFPI2 gene promoter methylation and CRC was measured using a pooled Odds Ratio (OR) with a 95% Confidence Interval (CI). The frequency of TFPI2 hyper-methylation in different clinicopathologic features was compared. Heterogeneity among studies was evaluated with Cochran’s Q test [7] and the I2 statistic [8,9]. When heterogeneity was not an issue (I2<50%), a fixed-effects model was used to calculate parameters. If there was substantial heterogeneity (I2>50%), a random-effects model was used to pool data and attempt to identify potential sources of heterogeneity based on subgroup analyses. The pooled OR was estimated for the association between TFPI2 hyper-methylation and clinicopathologic features. P-values less than 0.05 were considered statistically significant.

Publication bias was assessed using a method reported by Begger’s funnel plot and Egger’s test [10]. Subgroup analysis and sensitivity analysis was used to explored the reasons of statistical heterogeneity.

Thirty-three publications were identified using the described search method. Of these, 39 were excluded due to being laboratory studies, non-original articles (i.e., reviews), or irrelevant to the current analysis. Eventually, 13 studies were included in the final meta-analysis [11-23], as shown in Figure 1. 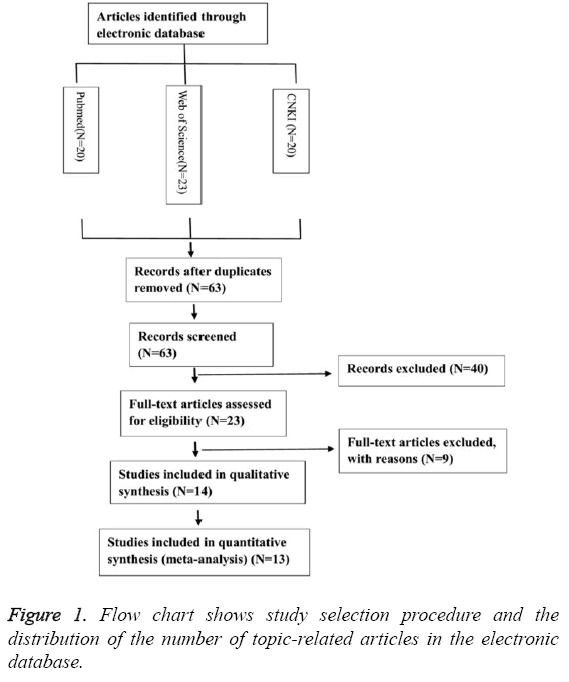 Figure 1: Flow chart shows study selection procedure and the distribution of the number of topic-related articles in the electronic database.

Table 1: Characteristics of eligible studies considered in the report.

The results of the association between the promoter methylation of the TFPI2 and CRC and the heterogeneity test were shown in Figure 1. For TFPI2 promoter methylation associate with the CRC risk, this meta-analysis demonstrated that the frequency of TFPI2 promoter methylation in CRC was significantly higher than that normal control (cancer vs. normal: OR=37.31, 95% CI: 22.06 63.12, p<0.0001) with no heterogeneity (p=0.12) as shown in Figure 2. Subgroup analysis by ethnicity demonstrated that TFPI2 gene methylation was positively associated with the risk of CRC among between Asians, Mixed and Caucasians (all p<0.0001) when compared to healthy control as shown in Figure 3A. By comparing CRC to normal control as regards TFPI2 methylation in tissues/serum/stool the result found significant differences as shown in Figure 3B among tissues/serum/stool with association of TFPI2 methylation in CRC patients. In addition, subgroup analysis by methods used showed that the OR was 58.58 (95% CI=(25.88; 132.58), p<0.0001) in Methylation-Specific Polymerase Chain Reaction (MSP), 27.64 (95% CI=(14.01; 54.55), p<0.0001) in Quantitative Methylation Specific Polymerase Chain Reaction (QMSP). 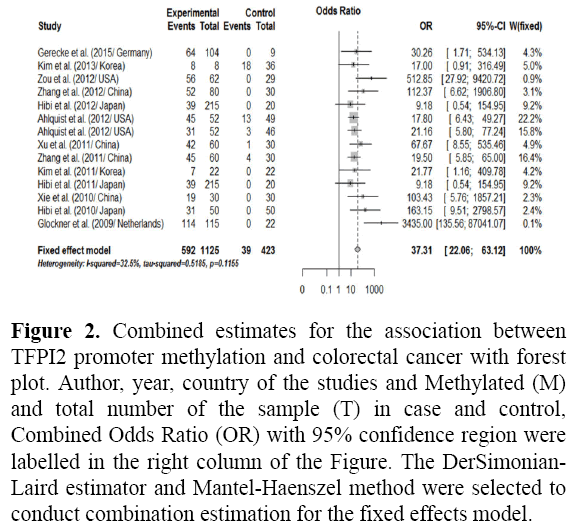 Figure 2: Combined estimates for the association between TFPI2 promoter methylation and colorectal cancer with forest plot. Author, year, country of the studies and Methylated (M) and total number of the sample (T) in case and control, Combined Odds Ratio (OR) with 95% confidence region were labelled in the right column of the Figure. The DerSimonian- Laird estimator and Mantel-Haenszel method were selected to conduct combination estimation for the fixed effects model. 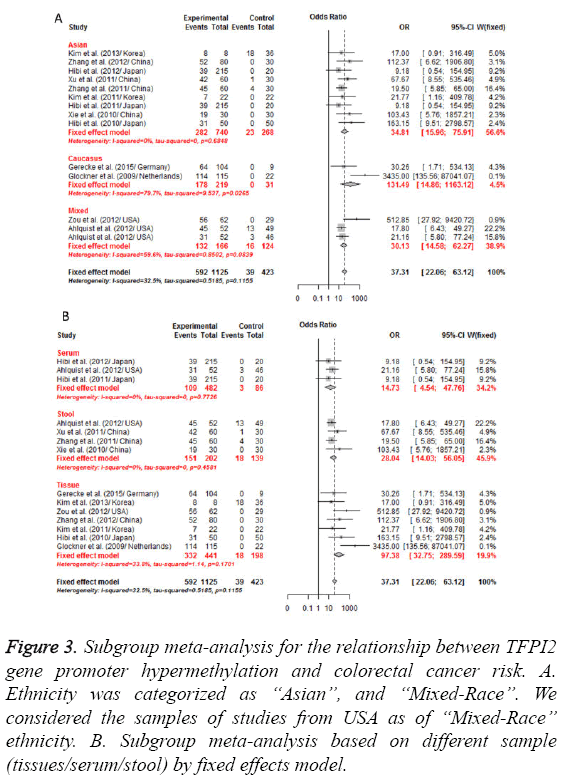 By comparing early stage to advanced stage patients (cut of point was stage I and II vs. stage III and IV) as regards TFPI2 methylation in CRC of the meta result which were found a significant differences between both groups with association TFPI2 methylation in CRC with advanced stage patients. Meanwhile, the result of the histology was significantly, which was similarly to the result of TNM staging system. When comparison between patients with males and old females also showed a non-significant difference as regards methylation status in TFPI2 promoter as shown in Table 2. The heterogeneity was so big between the results of TNM staging system and histology as shown in Table 2.

Table 2: The relationship between TFPI2 methylation and difference clinical characteristics.

A “sensitivity analysis”, in which one by one study was removed at a time, was conducted to assess the stability of the results. The pooled ORs were not significantly changed when we removed one study, indicating the stability of our analyses as shown in Figure 4A. Similarly, the funnel plots were largely symmetrical as shown in Figure 4B which suggested there were no publication biases in this meta-analysis of TFPI2 methylation and CRC risk. 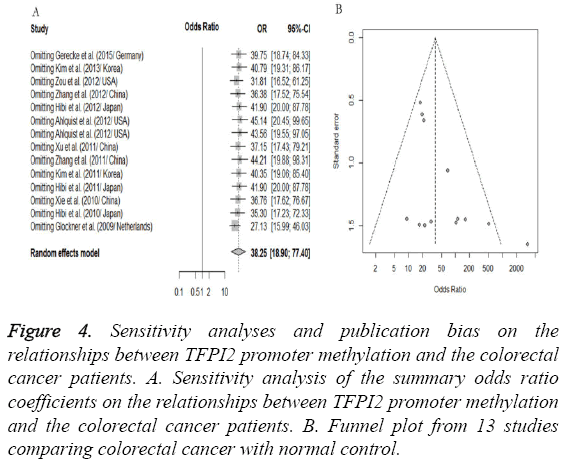 CRC is a major cause of cancer-associated morbidity and mortality in the world. It is the second most prevalent cancer affects in males and females almost equally [24]. The epidemiologies of CRC have been studied by researchers but the result was insufficiency. Epigenetic alterations, particularly aberrant the methylations of DNA, one of the most primary epigenetic modifications, contribute to tumor initiation and progression. TFPI2 gene promoter region methylation has been reported involvement in the pathogenesis of Ovarian Cancer [24], prostate carcinoma [25] and colorectal cancer [20]. Here, a systematic review was made to access the association between the promoter methylation of the TFPI2 and CRC.

To our knowledge, this first meta-analysis of the relationship between of TFPI2 gene promoter methylation and CRC. This meta-analysis retrospectively studied 13 cohort studies aiming to investigate whether promoter DNA methylation of the TFPI2 gene has an impact on the risk of CRC. The results revealed that the frequency of TFPI2 gene promoter hypermethylation in CRC tissues/serum/stool significantly higher than that in normal tissues/serum/stool. Although the exact role of methylation status of the TFPI2 gene in CRC carcinogenesis is still indistinct, theory has been hypothesized that CpG islands hyper-methylation in the TFPI2 promoter region may lead to transcriptional silencing, and thus inhibit its function of tumor inhibition, resulting in the development of CRC. Subgroup analyses also were conducted to identify the relationships between TFPI2 gene promoter hyper-methylation and CRC risk. The results of subgroup analysis based on ethnicity demonstrated that TFPI2 gene promoter hypermethylation was closely associated with the risk of CRC among Asians, Caucasians and Mixed-race, revealing that there was no ethnic difference in the effects of TFPI2 gene promoter hyper-methylation on CRC risk. Considering the other limitations, such as the number of some published studies was not sufficiently large, the number of cases and controls was relatively small in the subgroup analyses, other pathological factors (such as the age status, smoking status, drinking status and environmental factors) can affect the frequency of DNA methylation. Hence, In order to provide a more precise estimation, well-designed studies are warranted by taking potential confounders such as smoking status, age status, drinking status and environmental factors into account.

It is known that methylation is a major epigenetic modification in mammals, the stillness of the oncogene and tumor suppressor genes normally present in a dynamic equilibrium process, oncogene mutation or tumor-suppressor gene inactivation can directly or indirectly to break the balance, promote tumor formation and development. Hence, DNA methylation changes in cancer are well established, and translation of this knowledge toward screening has the potential biomarkers for significant health improvement. With the discovery of new disease screening markers, it may be possible to achieve early diagnosis, to have more informed choices for cancer treatment, and to identify markers associated with diagnosis and response to therapy.

The authors report no conflicts of interest. The authors alone are responsible for the content and writing of the paper.