Methods: Pre-post intervention study of 1,451 admissions to the NICU in 2012 (Period 1) and March 31, 2013 to March 30, 2014 (Period 2). FP rates were assessed in Period 1. Modified NBS collection guidelines were then implemented to withhold total parenteral nutrition 4 hours prior to obtaining sample. Period 2 data were compared to Period 1 using binomial logistic regression.

Results: 77% of all extremely low birth weight (ELBW) infants and 52% of all infants 1000-1499 g BW had at least one FP NBS result in Period 1. There was a trend towards reduction in the rates of FP results in Period 2.

Conclusion: Despite withholding TPN for 4 hours, the high rate of FP NBS results in our NICU did not significantly change.

NBS programs were further revolutionized with the introduction of tandem mass spectrometry (MS/MS), which allowed for multiple diseases to be tested [4]. In 2006, the American College of Medical Genetics recommended that expanded newborn screening include 29 inherited diseases [5]. To date, most states have implemented this expanded panel, with some states offering newborn screen testing for 40-50 inherited diseases. Tremendous variation exists between states with regards to the number of mandatory screens and timing of these screens. Expanded screening panels have, in turn, been applied to both healthy term infants as well as the smallest and sickest infants requiring neonatal intensive care.

Prior investigations have consistently reported a higher rate of false positive (FP) NBS results in premature infants (i.e., less than 37 weeks gestation), as compared with full-term infants [6,7]. However, these studies have failed to quantify the magnitude of the difference between FP rates for those 2500 g-3999 g birth weight as compared to the low birth weight (LBW, <2500 g), very low birth weight (VLBW, <1500 g and extremely low birth weight (ELBW, <1000 g) populations. In addition, total parenteral nutrition (TPN), specifically the amino acid component, has been implicated as a major contributor to the high FP NBS rates in the NICU [8-10]. Recent attempts to assess reduction in FP NBS rates by withholding TPN for 3 hours prior to obtaining NBS samples have not been consistent in showing a statistically significant reduction in the FP rates for the ELBW or VLBW population [9,10].

The goals of this study were:

(1) To establish baseline FP rates for the newborn screens in our NICU, particularly for the low birth weight patients.

(2) To identify and implement interventions aimed at reducing FP NBS rates in our NICU.

(3) Assess the effect of implemented interventions on the FP NBS rate.

This study was approved by the Yale University Human Investigation Committee. Informed consent was not required. The study was conducted at the Yale-New Haven Children’s Hospital (YNCHC) NICU, which is a 54-bed Level 4 NICU that serves as both an admitting hospital for inborn patients and a regional referral center for infants with complex medical and surgical needs.

Data were collected on all infants admitted to the YNHCH NICU during the following study periods: from January 1, 2012 to December 31, 2012 (Period 1) and March 31, 2013 to March 30, 2014 (Period 2), using the YNHCH electronic medical record and the Connecticut Department of Health Newborn Screening Database (MAVEN), which included all infants screened within the state of Connecticut.

We excluded infants from our analysis if any of the following information was incomplete: final NBS report, results of diagnostic testing performed in response to an abnormal NBS, or documentation of final diagnosis for NBS abnormality. Common reasons for incomplete data included inability to access medical records for infants transferred back to referring facilities and lack of diagnostic testing for infants who expired with abnormal newborn screen results.

The following information was extracted: sex, gestational age (GA), birth weight (BW), timing of newborn screen collection (<24 hours after birth (HAB), 24-72 HAB and >72 HAB), NBS final reports, diagnostic testing results for NBS abnormalities, and documentation of diagnosis for NBS abnormalities. The study investigators tracked each positive result on any NBS sample until its final resolution. Final resolution was accomplished either by repeat NBS collection and result or through confirmatory testing as requested by subspecialty consultation.

Based on data collected during Period 1 and in consultation with the state and local newborn screening experts, the screening protocol was modified in Period 2 in an effort to decrease FP results. The modifications were aimed at addressing concerns regarding disproportionately high FP rates for samples obtained at <24 HAB, TPN interference with NBS results, and improper sample collection techniques. The modified protocol called for:

(3) Protein intake for a minimum of 8 hours prior to obtaining the newborn screen (including breast feeding, formula feeding or TPN).

(4) When applicable, withholding TPN for 4 hours prior to obtaining any NBS specimen at 24 HAB or later (fluids with appropriate electrolyte and dextrose concentration ordered during this time).

(5) All samples obtained by heel-stick.

A comprehensive nursing/medical staff educational initiative was also conducted to inform staff of the problem of high FP rates in our preterm population and the rationale behind the initiative, to improve techniques for obtaining samples and to provide an overview of the changes to the NBS guideline. Nurses from the YNHCH NBS committee provided one-on-one review of the guideline/procedure modifications to the nursing staff. A protocol flow diagram was created and placed at each patient bedside. This flow diagram was updated by nursing at the time of NBS collection and remained at the patient bedside until discharge. This education was initiated on January 1, 2013 with full implementation of these changes beginning March 31, 2013 (onset of Period 2).

All samples were sent to the state of Connecticut Department of Public Health Newborn Screening laboratory for processing via United Parcel Service (UPS) or hospital-based courier service.

In Period 1, analysis included determination of rates of positive (abnormal) NBS and rates of FP NBS for all admissions to the NICU, stratified by GA and BW categories. Negative newborn screens were considered true negative screens given the inability to obtain information prospectively on all subjects, i.e., 100% sensitivity was assumed. Rates were summarized as percentages. Binary logistic regression was utilized to compare FP newborn screen rates between infants in lower categories of BW and infants of normal BW for the following screens: overall newborn screen for any time after birth, newborn screens at <24 HAB, newborn screens at 24-72 HAB, as well as newborn screens for Biotin, CAH, TSH, GAL, AA, AC and TREC at 24-72 HAB.

Differences in the distribution of gender, GA categories and BW categories were tested between Period 2 and Period 1 using the chi-square test. Binary logistic regression was used to compare false positive NBS rates between study periods, stratified by BW categories.

Results from logistic regression analyses were summarized as odds ratios (OR) with 95% confidence intervals (95% CI).

Statistical significance was considered at alpha=0.05. SPSS version 21 (IBM) was used to conduct all statistical analyses, and Excel (Microsoft) was used to create the figures.

There were 1,829 NBS samples obtained from the 1,581 infants admitted to the YNHCH NICU over the entire study period. Complete documentation of all NBS sample results, confirmatory testing and final diagnosis related to newborn screening abnormalities were available for 1,734 samples (94.8%) in 1,451 infants (91.8%) and were included for analysis. GA ranged from 22 weeks to 42 weeks and BW from 380 g to 5330 g (Table 1).

Complete data were available for 724 of the 791 YNHCH NICU admissions (91.5%) with 924 NBS samples included in the analysis. There were 149 (16.1%) abnormal NBS results noted in 112 (15.5%) infants admitted to the YNHCH NICU. Forty-three percent of patients with abnormal NBS results (48 infants) had abnormalities for multiple conditions (eg. AA and TREC profiles). FP results were identified in 141 (94.6%) of abnormal screening results, which corresponds to 105 (93.8%) of the patients with abnormal screening.

True positive results were found in 7 patients. Two of these infants were determined to have CAH. One of these infants was found to have an initial false negative result for CAH, in addition to FP results for the AA and AC. The other infant was found to have FP AA and TREC, in addition to true positive CAH result. The remaining 5 infants were diagnosed with Biotinidase deficiency, Galactosemia, Ornithine Transcarbamylase Deficiency, Short Chain acyl-CoA Dehydrogenase Deficiency carrier and Glutaric Acidemia. 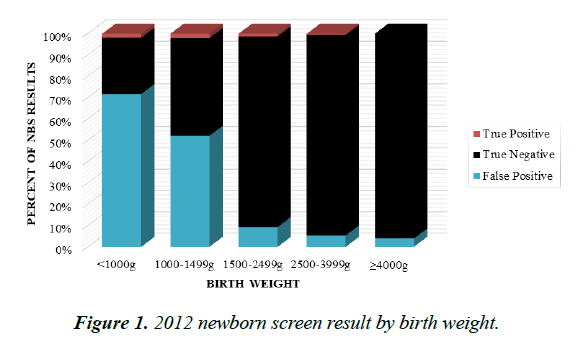 Our study confirms a very high rate of FP NBS results in LBW infants in the NICU, particularly those weighing <1000 g and 1000 g-1499 g, when compared to infants with BW 2500 g-3999 g. While the VLBW patients comprised fewer than 15% of the yearly NICU admissions, they were responsible for more than 50% of the abnormal newborn screen results, of which >95% are FP. Strikingly, our study found 3 out of every 4 ELBW infants admitted to our NICU during the study period had at least 1 FP NBS result, a finding that did not significantly change despite our interventions. Unlike previous studies which have shown the CAH and TSH profiles to be the primary drivers of the high FP rates in this population [6], we found that the most common abnormalities are those related to the AA, AC, CAH, and TREC profiles.

The impact of this high rate of FP NBS results in our most vulnerable patients is, we believe, significant. Parental anxiety is a common and understandable result of disclosure of initial positive result, despite reassurance that the results are likely spurious. Repeated blood draws cause pain to the patient and follow-up testing takes time and money. All of these factors combine to create the perception that the NBS may be causing more harm than benefit in the smallest and sickest NICU patients. The medical providers are not likely to be immune to a sense of mistrust in the NBS process for these patients, potentially leading to complacency and delay in diagnosis for the rare child who truly has a treatable disease. It is unavoidable human nature that too many false alarms can make us less vigilant in our attention to the valid ones.

We were able to show a statistically significant decrease in the likelihood of having abnormalities related to the AC profile at 24-72 HAB in the ELBW infant with the implementation of our interventions, including withholding TPN for 4 hours prior to obtaining screening samples. While the significant decrease was found only in ELBW infants, this finding supports the idea that components of TPN may affect the AC profile and withholding TPN for a standard period of time prior to obtaining the newborn screen may improve the accuracy of results. However, the appropriate duration to withhold TPN balanced with the potential risks of withholding nutrition remains uncertain [11].

Surprisingly, our investigation revealed a statistically significant increase in the likelihood of FP NBS results in 1500 g-2499 g infants at <24 HAB in Period 2 compared to Period 1, highlighting the challenges of interpreting data in a pre-post intervention study.

Following modifications to the NBS protocol, we were able to reduce the number of NBS samples obtained 1500-2499 g infants at <24 HAB from 43 in Period 1 to 8 in Period 2. The total number of patients with FP results remained essentially unchanged from Period 1 to Period 2, thus accounting for the significant increased likelihood of FP NBS results. Most importantly and in keeping with our pre-intervention data, 100% of the abnormal NBS results obtained at <24HAB were FP in our post-intervention group.

Limitations to our study included the inability to assess the true false negative rate, therefore the assumption of 100% sensitivity, as a consequence of the inability to obtain longterm follow-up information on all patients admitted to the NICU. In addition, the broad categorizations used in the study design (eg., AA and AC) limited the ability to identify particular patterns of analyte abnormalities and their associated diseases (eg., homocystinuria and methylmalonic academia), data that could be critical to inform future interventions. Perhaps most importantly, our study was limited in scope, focused on practice in a single unit in a single state. Despite these limitations, the data presented suggests a significant problem that could have serious consequences, and it is our hope that these findings will foster a national conversation focused on improving NBS in the NICU population.