It is well-known that apical periodontitis is caused mainly by bacteria and bacterial components from the root canal system. Periapical bone destruction is the most characteristic feature of acute purulent apical periodontitis [1,2]. In most cases, the abscess destroys the relatively thin bone cortex on the buccal or lingual side. Abscesses form under the periosteum, causing the inflammation to expand further into the surrounding soft tissue, which can result in the formation of fistula and a shift from acute apical periodontitis to chronic apical periodontitis [3].

Endodontic-periodontal disease is a relatively familiar disease; however, its etiology is not easily elucidated in daily clinical practice [4–6]. Even carefully following the highest standard of treatment will not always cure it, and refractory apical periodontitis can then develop.

Here a simple classification of endodontic-periodontal lesions is demonstrated (Figure 1): 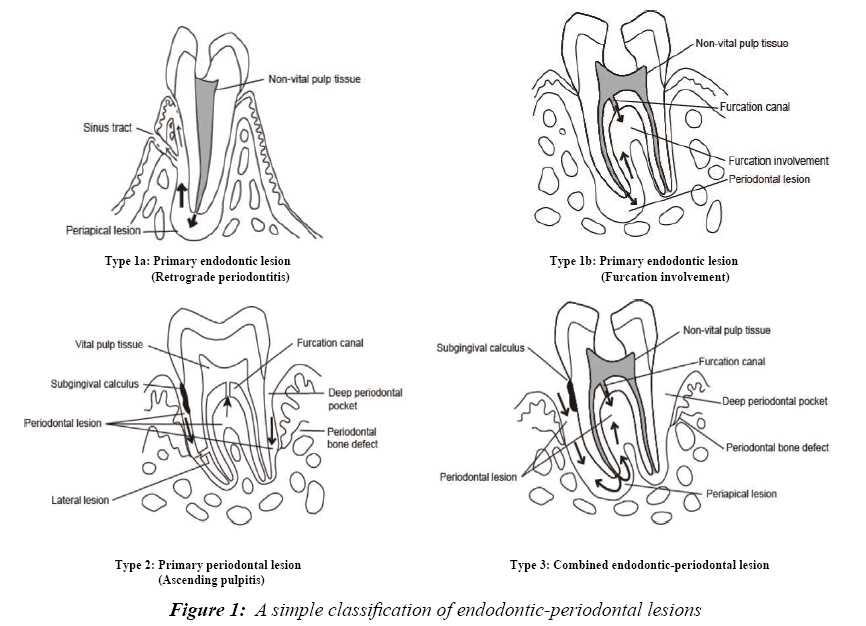 The characteristic features of each type of endodonticperiodontal lesion are shown in Table 1. In this report, a treatment course for Type 1a along with this classification, endodontic-periodontal disease in an immature tooth with retrograde periodontitis, is demonstrated.

A 10-year-old girl visited with the chief complaint of gingival swelling of the mandibular left premolar (Figure 2a). She was referred to the hospital for specialized care, manifesting spontaneous pain (–), percussion pain (+), tooth mobility (–), sinus tract (+), and apical pressure pain (±) in 35. Probing Periodontal Pocket Depth (PPD) of 35 was 6 mm, with no bleeding on probing; PPD of the other teeth were less than 2 mm (Figure 2b). Good oral hygiene was seen, and neither deposits of plaque nor calculus were observed in the pocket. Radiographic examination revealed a prominent radiolucent area extending to the root apex in the mesial site of 35 (Figure 2c). A radiolucent area in the central portion of the occlusal surface was observed (Figure 3a). A gutta-percha cone through the sinus tract was used to close the root apex (Figure 3b). Out of all the teeth, the vertical bone defect was only observed at the mesial site of 35 (Figure 4). 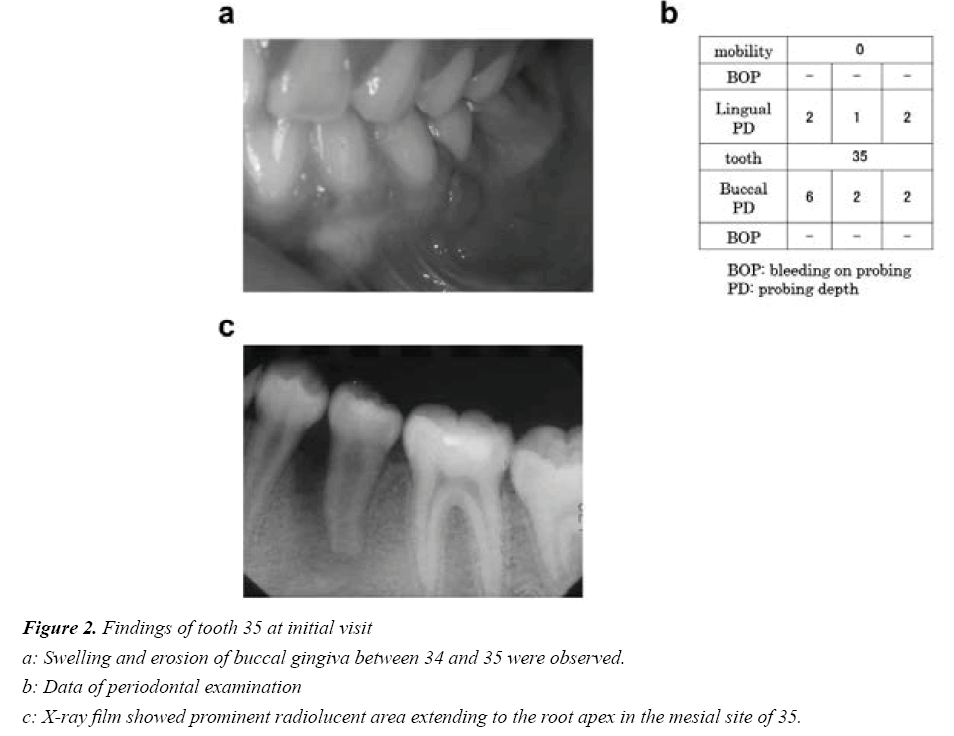 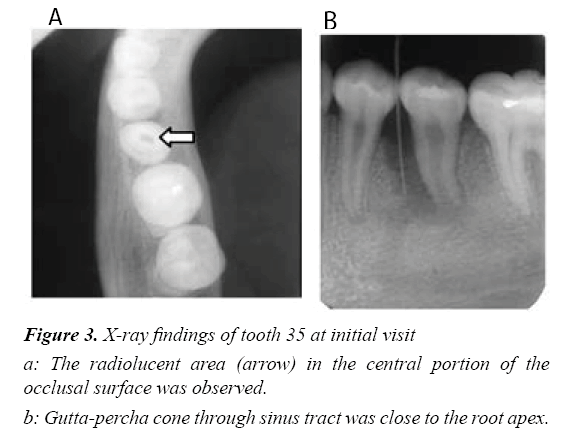 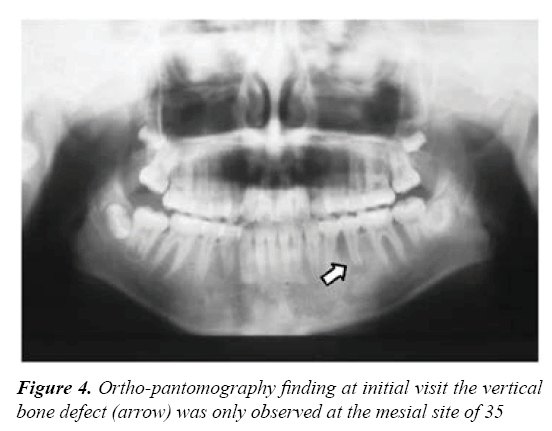 Figure 4: Ortho-pantomography finding at initial visit the vertical bone defect (arrow) was only observed at the mesial site of 35 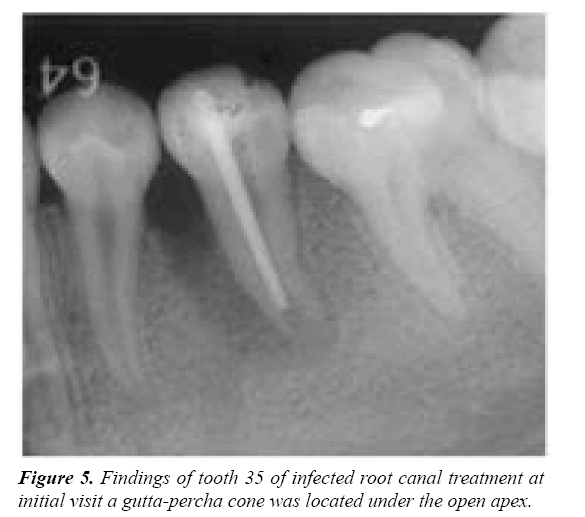 Figure 5: Findings of tooth 35 of infected root canal treatment at initial visit a gutta-percha cone was located under the open apex.

Figure 6: Findings of tooth 35 during apexification

Two years and four months after the root canal filling, no radiolucent area was observed and the alveolar bone height showed the same level as the neighboring teeth. The prognosis has been favorable, with a clear laminar dura at the mesial site of 35 (Figures 7b and 7c).

The central nodule that is commonly found in the mandibular second premolar is a conical or short rod like small protrusion seen in the central part of the occlusal surface. As a result, when this protrusion breaks during occlusion, the pulp is exposed, which may cause apical periodontitis from pulpitis, so clinical attention is required. It has been generally reported that bacterial infection spreads to the pulp cavity due to a coronal fracture caused by trauma, and suppurative inflammation often happens in the dental pulp tissue. It has also been suggested that pulpal necrosis occurs as a sequel of pulpitis or traumatic injury, and then apical periodontitis is caused by bacteria and bacterial products from the root canal system [3]. Although rare, it has been demonstrated that periapical inflammation can develop into retrograde periodontitis [7]. In this case, a deep narrow pocket was seen at just one aspect of the root surface and open to the gingival sulcus or the bottom of the existing periodontal pocket.

In general, chronic periodontitis is a common plaqueinduced periodontal infection that shows connective attachment loss followed by activation of bone resorption. Furthermore, in progressive periodontitis, wedge-shaped vertical bone defects, many deep periodontal pockets and the accumulation of large amounts of plaque are observed [8].

Because the patient in this case was 10 years old, it was hard to believe that she could be suffering from chronic periodontitis at this age. Additionally, hardly any accumulation of plaque was observed in the gingival sulcus. A horizontal bone defect image was observed at the mesial side in the X-ray findings and a periodontal pocket of 6 mm was only seen in the buccal mesial side of the diseased tooth root. This periodontal pocket disappeared quickly after the root canal treatment, and the X-ray findings revealed that bone tissue had recovered to a healthy level after root canal filling. From these findings, it is inferred that the resorption image of the alveolar bone at the marginal portion observed in this case was a different lesion from the true marginal periodontitis characterized by the attachment loss.

It is well-known that the first choice of treatment for Type 1 endodontic-periodontal disease caused by apical periodontitis is infected root canal treatment [4–6]. In addition, intervention by periodontal treatment after followup should be considered. Conversely, it has been suggested that root formation and apical closure are possible in immature teeth as long as the Herdwig’s epithelial sheath survives, even when the pulp is infected and necrosed [9,10]. It is thus important to be careful not to damage the periodontal tissue of the apical portion by over instrumentation and over filling beyond the apical foramen.

A prerequisite that forms the basis of infected root canal treatment appears to be not to damage the apical periodontal tissue but to activate its self-repairing ability by eliminating inflammatory factors in the root canal and to enhance the healing mechanisms of the periapical region. It is therefore necessary to keep the Vitapex® containing calcium hydroxide inside the root canal. Elongation of the root and closure of the open apex were observed as a result of root canal treatment in which the work length was set so that the calcium hydroxide preparation did not come into direct contact with the apical periodontal tissue [11–14]. In this case, a slight elongation of the apical apex was observed two years and four months after root canal filling without intervention by periodontitis treatment. In recent years, the possibility of hard tissue formation resulting from differentiation of the Stem Cells of the Apical Papilla (SCAP) has been suggested [15,16]. It is thought that elongation of the apical root and healing of the alveolar bone were induced by providing an effective environment for restoring the function of the Herdwig’s epithelial sheath and activating the SCAP. Recently, Regenerative Endodontic Therapy (RET) has attracted attention [17]. It was reported that RET and apexification achieved a comparable outcome in regard to the resolution of symptoms and apical healing in the treatment of immature teeth with the periapical lesion [18].

It has been demonstrated that the pathway of endodontic inflammation is through the apical foramen, furcation canals, and lateral accessory canals to the periodontal ligament in the endodontic-periodontal lesions [3]. In addition, endodonticperiodontal diseases are caused by various factors such as perforation and root fracture [9-22]. Therefore, the clinician needs to bear in mind that the successful outcome is based on accurate diagnosis during the treatment of the confusing endodontic-periodontal problem.

The results confirm the importance of accurate examination and diagnosis using clinical examination and precise observation of the X-ray findings in the treatment of endodontic-periodontal disease (primary endodontic lesion) showing retrograde periodontitis and open apex.

The authors confirm that there are no conflicts of interest related to this study.