Key steps for femoral head necrosis should meet the criteria of lesion debridement with less trauma and providing biology repair materials and structure support. To our knowledge, Fibular Allograft with Impaction Bone Grafting (FAIBG) as a minimally invasive technique could solve these problems, which has attained stable clinical effects. However, clinical doctors and researchers still debate the orientation of the implant. This study used computational biomechanical technique to explore the optimal orientation of FAIBG though investigating and analysing the stress distributions of anterolateral column and peak stress. The results indicated that the orientation of core decompression with FAIBG may attain better biomechanical conditions for the repair of osteonecrosis.

The common objective of every hip preservation procedure is to reserve the self-head of the patient with Femoral Head Necrosis (FHN) [1]. Several procedures, such as Core Decompression (CD), core decompression with fibular autograft, fan-shape decompression with fibula allograft, allogeneic fibular implantation and tantalum insertion have been developed to arrest the progression of osteonecrosis to avoid Femoral Head Collapse (FHC) and Total Hip Replacement (THR) in the early stage of FHN [2-14]. Key steps for FHN should meet the criteria of lesion debridement with less trauma and providing biology repair materials and structure support. To our knowledge, isolated CD shows limited success in delay the progression of FHC because it could not recover the biomechanical environment [15,16]. Autologous bone graft is often associated with serious trauma, high infection and longer recovery time [17]. Fibular Allograft with Impaction Bone Grafting (FAIBG) is a minimally invasive technique for preventing the mechanical failure of femoral head and interrupting the disease of FHC and THA, which attained stable clinical effects. However, clinical doctors and researchers still debate the path of the implant.

In this study, computational biomechanical technique was used to explore the optimal path of FAIBG though computing and analysing the stress distributions of anterolateral column and peak stress, which provides theoretical proof for clinical practice.

CT image of the entire hip were acquired from an osteonecrotic patient without FHC. The resolution of the CT images was 1024 × 1024 pixels. The slice thickness was 0.1 mm. The images of DICOM format were input into the interactive medical image control system (mimics 15.1) to extract the 3D geometry of hip bone. The acetabular and femoral head cartilages were reconstructed based on anatomical data in the reverse engineering software Rapidform XOR3.

The parametric analysis was designed to explore the optimal path of FAIBG. The orientations of fibula with screw are schematically shown in Figure 1. The screw was place parallel to the fibula. Screw thread embeds in the fibula upside and the tail presses the distal fibula. The fibular geometry was a 6 mm radius and 90 mm length cylinder. The apex of the fibula was 5 mm at a distance from the cortical bone of bearing weight region. There are nine models were created. 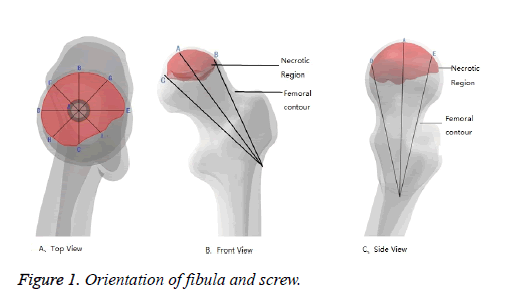 Figure 1: Orientation of fibula and screw. 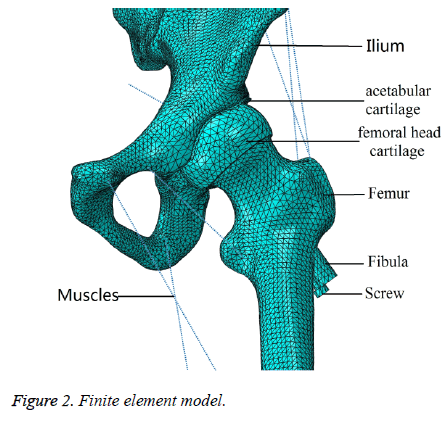 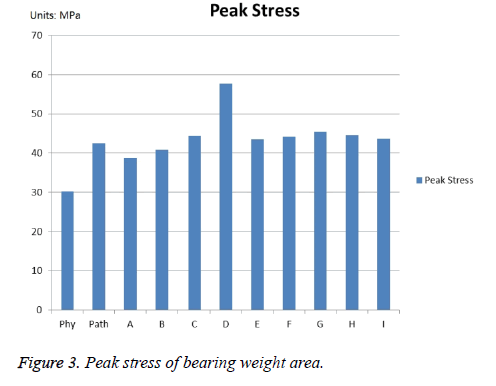 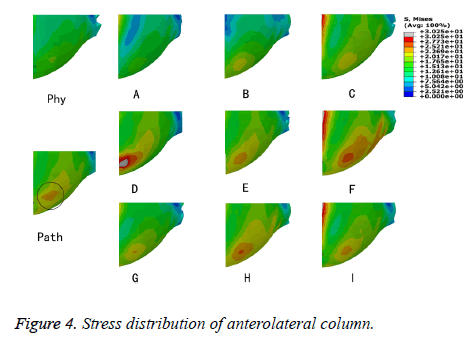 Biomechanical reconstruction of the necrotic femoral head remains a complicated issue. Clinical doctors and researchers have developed various hip preservation procedures to protect the self-head of the FHN patient and used the finite element method to assess the curative effect thought analysing the biomechanical change of different materials [23]. These studies had shown that FEA has the ability to predict the collapse risk of femoral head with various surgical setting. However, relatively few FEM studies have considered the effect of orientation of FAIBG in Treating the FHN.

FAIBG has become the most potential substitute treatment for FHN, which combines the benefit of decompression with the added benefit of allogeneic repair and support materials integrated into the necrotic region. However, the optimal orientation of the implant has not been discriminated; hence, a study centered on the basic principles for FAIBG is still importance to avoid therapic failure and FHC. In this study, eleven models have been constructed and used to simulate nine orientation of the implant. The results showed that only the A control, as the orientation of core decompression, both reduce the peak stress and eliminate the concentrated stress region compared to the pathologic control. Hence, A control appears to be an optimal orientation of FAIBG in treating FHN.

In conclusion, parametric FEA is a useful tool for providing a biomechanical basis for clinical practice. The simulated results indicated that the orientation of core decompression for FAIBG may attain better biomechanical conditions for the repair of osteonecrosis.

There are no financial and personal relationships with other people or organizations that could inappropriately influence our work for all authors of this paper.

The authors declared no potential conflicts of interest with respect to the research, authorship, and/or publication of this article.