Tuberculosis (TB) remains the single largest infectious disease causing high mortality in humans, leading to 3 million deaths annually, about five deaths every minute. Approximately 8-10 million people are infected with Mycobacterium tuberculosis every year [1]. Out of the total number of cases, 40 percent of the cases are accommo-dated in South East Asia alone. In India there are about 500,000 deaths occurring annually due to TB [2], with the incidence and prevalence being 1.5 and 3.5 millions per year. A positive AFB smear and /or culture of Mycobac-terium is the gold standard for the diagnosis of tuberculo-sis. Though smear positivity correlates well with infectiv-ity, much of the transmission occurs before the level of bacilli reach 104 per ml in the sputum. Infection is a sto-chastic process and certainly occurs from paucibacillary and smear negative cases which are more common in HIV seropositives [3].

Problem arises when sputum smear result is repeatedly negative for acid fast bacilli and to detect the TB bacilli microscopically, there should be at least 50,000 bacilli per ml of sputum. Culture for tubercle bacilli is a sophisti-cated and time consuming process. The TB bacilli grow slowly (generation time 14-15 hours) and culture becomes positive only in about 2 weeks and some times it may take up to 6-8 weeks[4].Chest radiograph (Skiagram) provides only a probable diagnosis, they are some times difficult to differentiate from other cause of lung shadows such as pneumonia and malignancies[5]. To overcome these diffi-culties various workers have tried different biochemical test from time to time which may help in early diagnosis and confirmation of pulmonary tuberculosis.

Adenosine deaminase (ADA) an enzyme of purine ca-tabolism has been shown to provide promising result. In the present study the diagnostic efficiency of serum ADA activity has been evaluated in pulmonary tuberculosis and non tubercular pulmonary diseases and its relationship with clinical, radiological and laboratory parameters.

The study was carried out on 142 patients suspected from various pulmonary disorders between July 2008 and January 2009.Forty five normal healthy individuals (Medical and paramedical staff of Navodaya Medical College Hospital and Research Centre, Raichur, Karna-taka) were included as control subjects for ADA estima-tion. The study groups and number of patients suspected from pulmonary disorders were categorized as shown in Table 1. 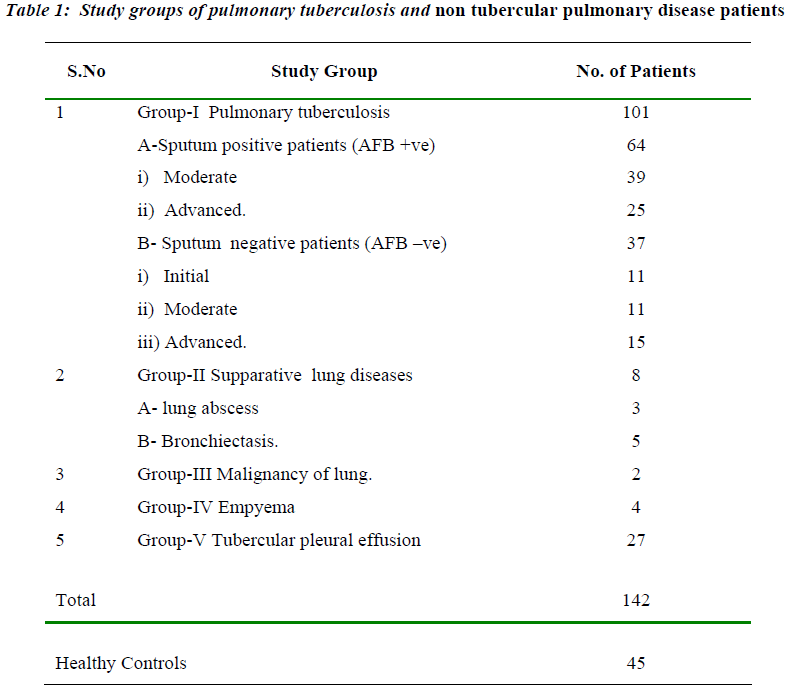 A patient with at least two sputum specimen positive for Acid Fast Bacilli by microscopy.

A patient with at least one sputum specimen positive for Acid Fast Bacilli by microscopy, and radiographic ab-normalities consistent with pulmonary TB

A patient with at least one sputum smear positive for Acid Fast Bacilli by microscopy, which is culture posi-tive for M .tuberculosis

A decision by physician to treat with a full course of anti TB chemotherapy.

Lack of clinical response despite one week of a broad spectrum antibiotic administration and a decision by physician to treat with a full curative course of anti- TB chemotherapy.

Inclusion and exclusion criteria followed in the present study are as follows:

A detailed clinical history was taken and thorough physi-cal examination was carried out in every subject. A set of investigations including three consecutive (spot-early mornings-spot) sputum samples examination, Mantoux test, Posteroanterior chest x-ray and ESR by Westergren method were carried out on study group. ADA estimation was done by sensitive colorimetric method described by Guisti [6]. Serum ADA estimation was done in healthy controls, pulmonary tuberculosis patients and other com-mon respiratory diseases.

Adenosine deaminase hydrolyses adenosine to ammonia & inosine. The ammonia formed further reacts with a phenol as hypochloride in an alkaline medium to from a blue color indophenol complex with sodium nitroprusside acting as a catalyst. Intensity of the blue colored indophe-nol complex formed is directly proportional to the amount of ADA present in the sample.

This method of serum ADA estimation is based on the principle of Guisti G Galanti methods of enzymatic analyses 1974 [6]. For the determination of Adenosine deaminase activity in serum, plasma, and biological flu-ids, ADA MTB diagnostic kit from Microxpress a divi-sion of Tulip diagnostics (P) Ltd has been used.

None of the patients of non tubercular pulmonary diseases showed serum ADA level above 33 U/L, though their values were significantly high compared to control group. Hence serum ADA of 33 U/L is taken as cut off value. The mean serum ADA activity level in pulmonary tuber-culosis (sputum AFB positive as well as in AFB negative cases) was 40.48 ± 8.02 U/L. 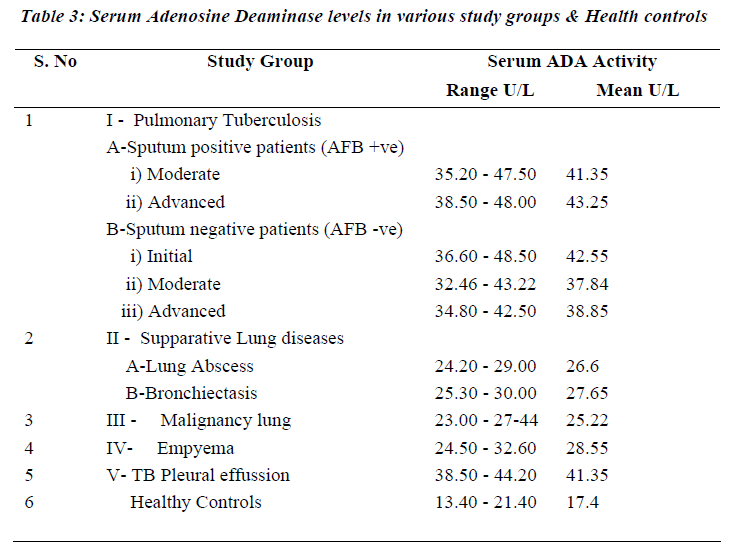 In the present study, specificity and sensitivity of serum ADA level in the diagnosis of pulmonary TB was found to be 95.35% and 98.06% respectively. 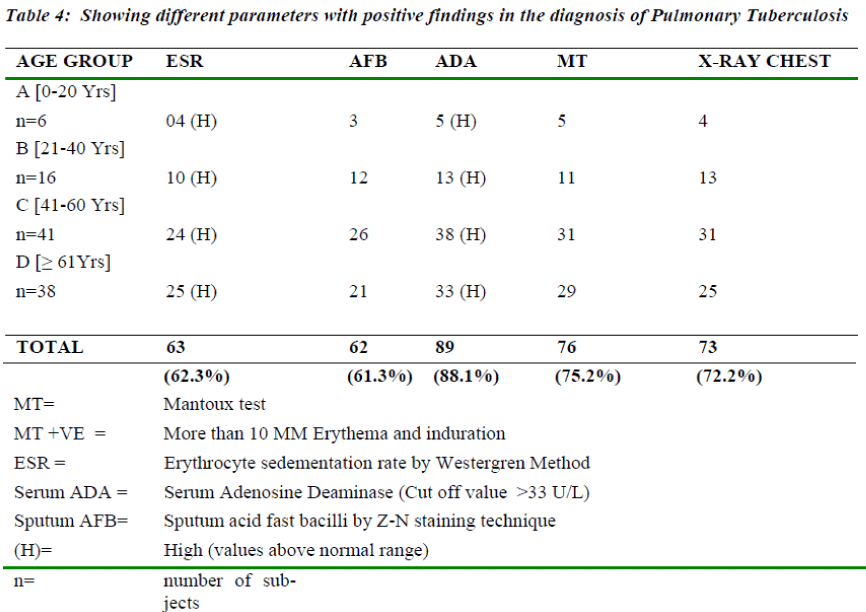 Table 4: Showing different parameters with positive findings in the diagnosis of Pulmonary Tuberculosis 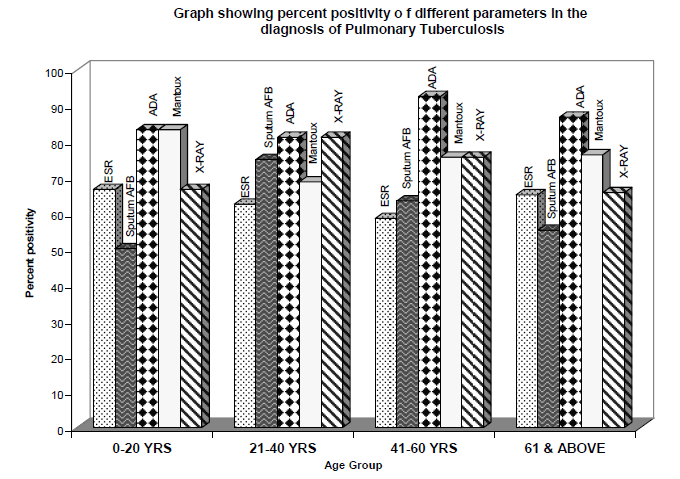 In the present study, a high occurrence of pulmonary tu-berculosis was found in the age group 41-60 years with Serum ADA positivity of 92.6% (38/41) cases. Percent positivity of serum ADA was more, compared to other diagnostic tests like Mantoux test, sputum AFB, chest x-ray and ESR. However elevated levels of ADA have been reported in effusions due to peritoneal, meningeal, pleu-ral, pericardial and in several diseases like Typhoid fever, infectious mononucleosis [14], brucellosis and broncho-genic carcinoma [15] involving stimulation of cell medi-ated immunity. According to Giblett et.al [16], a fully functioning cell mediated immune response is dependent on normal lymphocyte metabolism which is, in part, regu-lated by the purine salvage enzyme, Adenosine deami-nase. Therefore increased serum ADA activity is also found in other diseases involving stimulation of cell me-diated immunity.