Administration of immunosuppressive treatments for uraemia, haemodialysis or post-transplantation medication in patients with Chronic Renal Failure (CRF) may lead susceptibility to infections. In particular, the risk of opportunistic viral, bacterial or mycobacterial infection increases [1]. Tuberculosis (TBC) is also one of the most frequent opportunistic infections and antimycobacterial agents are used in its treatment [2]. Ethambutol (ETM) and Isoniazid (ISN) have been used as the first-line medication in tuberculosis treatment since 1960 [3]. However, the most commonly identified toxic effect of ethambutol and isoniazid combination is optic neuritis and chiasmopathy which lead to centrocecalscotoma as well as loss in visual acuity and color vision [1]. In 1984, Medical Protection Society stated that visual field examination shall be performed on both eyes of the patients prior to ethambutol medication, and they should be subject to regular checks with 1 month intervals to determine whether they suffer visual loss after starting the medication or not [2]. Precise pathophysiology of ethambutol’s toxic effects is yet to be understood. Retinal toxicity has been implicated as a mechanism of ethambutol damage. The toxicity of ethambutol was evaluated in rodent retinal dissociated cell preparations and whole eyes. Calcium fluxes and mitochondrial function were evaluated by fluorescent and staining techniques. Endogenous glutamate is necessary for the full expression of ethambutol toxicity.

Ethambutol causes a decrease in cytosolic calcium and increase in mitochondrial calcium. So an increase in the mitochondrial membrane potential becomes. The visual loss associated with ethambutol may be mediated through an excitotoxic pathway, so that ganglion cells are rendered sensitive to normally tolerated levels of extracellular glutamate. Ethambutol perturbs mitochondrial function [2]. Toxicity on the dose and duration of ethambutol and isoniazid treatment, and is generally reversible. Besides, the age, hypertension and renal dysfunction increase the risk of toxicity [3].

The aim of this article to present a case with chronic renal failure developing bilateral toxic optic neuritis during ethambutol and isoniazid treatment for bone Tuberculosis.

An 81 year old female undergoing haemodialysis three times a week for 6 years with chronic renal failure had been diagnosed with tuberculosis spondylodiscitis eight months ago. Standard treatment protocol consisting (Ethambutol 15 mg/kg/day, isoniazid 5 mg/kg/day, rifampicin 10 mg/kg/day and pyrazinamide 20 mg/kg/day) was initiated after necessary work-up. Before the treatment, eye examination was conducted. However, the patient did not admit for monthly ophthalmologic examinations and developed decreased visual acuity in both eyes within 10-15 days after the start of the medication. She applied to our clinic in the second month of the treatment. The patient did not have headache and eye ache. She had a bilateral cataract operation history. She did not have any chronic disease (e.g. diabetes mellitus, hypertension). During the ophthalmologic examination, direct and indirect light reflexes were received and eye movements were normal. Vision of both eyes was at hand motion level. Color vision and visual field tests could not be performed due to low vision level. In the bio-microscopic examination of front segment, cornea was hyaline and bilateral pseudophakia was present. Optic media did not contain any opacity. Both optic disks were observed to be faded during fundus examination. Her retinal and vascular structures and macula anatomy were unaffected. Fundus oculi for both eyes of the patient are shown in Figure 1 and Figure 2. Other systemic examinations were normal. 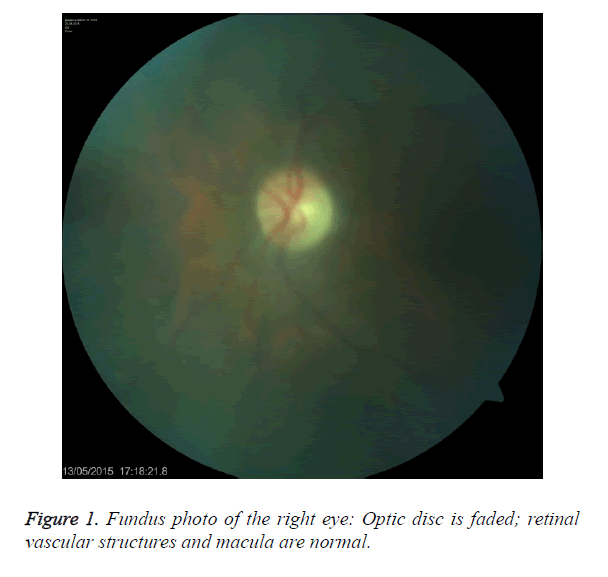 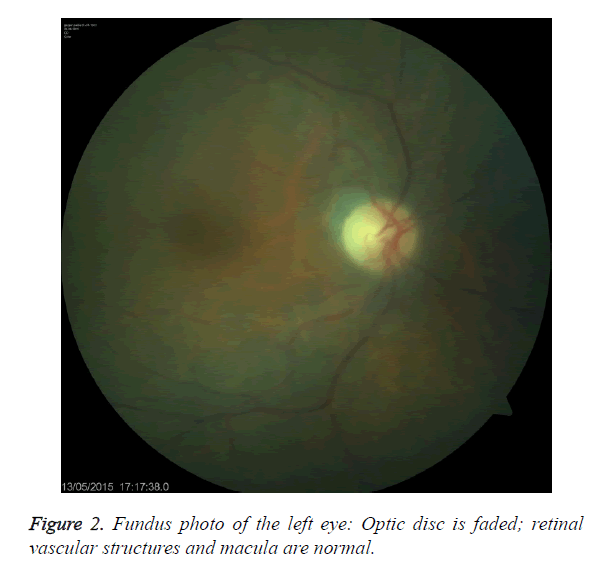 Considering the indolent and bilateral visual loss suffered by the patient occurred soon after she started to receive antituberculosis medication and eliminating other causes in etiology, ethambutol and isoniazid were excluded from tuberculosis treatment due to toxic optic neuritis associated with drugs. After multi-vitamin injections including hydroxocobalamine (vitamin B12) 1000 μg/day and pyridoxine (vitamin B6) 250 mg /day were applied to the patient whose vision did not recover in the follow-up, during 1 week, Vitamin B6 250 mg/day and Vitamin B12 1 mg/day were administered orally and regularly for 3 months. Follow-ups of the patient did not show any improvement in vision and ophthalmologic examinations. The patient continued to take treatment of vitamin B6 250 mg/day and vitamin B12 1 mg/day.

In this article a case was presented with chronic renal failure history having visual loss after tuberculosis treatment and diagnosed as having bilateral toxic optic neuritis associated with ethambutol and isoniazid medication upon a detailed examination.

In this case diagnosed with indolent bilateral optic neuritis, artheritic ischemic optic neuropathy was excluded since no fever, headache, scalp tenderness and tender temporal arteries, jaw claudication were present and, ESP and CRP values were normal [4]. Non-artheritic ischemic optic neuropathy that occurs in hypertension or hypovolemic patients having nocturnal hypotension was excluded since our patient did not have an arterial hypertension history, and there were no blood or volume loss history. Euvolemic haemodialysis had been applied to her and average arterial tension value was observed as 110/80 mmHg in her follow-ups [5]. After excluding the images of orbital and brain MRI and other demyelinating and tumoral causes, the correct diagnosis was reached through clinic and medical history. Whereas optic neuritis associated with ethambutol, which is used in the first line of tuberculosis treatment, is a known but rarely-seen side effect, the optic neuritis associated with isoniazid is observed much more rarely [6]. Optic neuritis may change depending on the dose of the drugs and comorbid situations of the patients such as chronic renal failure, liver injury, malnutrition and diabetes mellitus [7]. As renal elimination of drugs is disrupted in haemodialysis patients, this risk further increases [7].

Ethambutol toxicity-related visual loss is generally observed 2 months after the initiation of medication. Bilateral or unilateral optic neuritis may be observed. In the most frequent type of optic neuritis, blurred vision associated with disruption of central fibers of the optic nerve, decrease in visual acuity and centracecal scotoma may be observed; generally, ability to see green is lost while ability to see red is also lost occasionally (dyschromatopsia). In the second type, seen rarely, peripheric fibers of the optic nerve are disrupted and as a result, visual field narrows, but visual acuity does not decrease. No change was observed during fundus oculi examination of both types [8]. When Ethambutol is taken in doses of 50 mg/kg/day, 25 mg/kg/day and 15 mg/kg/day, optic neuritis clinic emerges with a rate of 15%, 5% and 1%, respectively [8]. In our case, although she took ethambutol in dose of 15 mg/kg/day, we think that optic neuritis development was associated with decreased elimination of the drug because of the chronic renal failure. In the picture of isoniazid-related optic neuritis, visual loss generally starts within 10 days [9]. It may cause visual complications such as slow down of accommodation, bilateral decrease of visual acuity and color vision at various levels, and bitemporal hemianopsia and centrocecal scotoma. In fundus examination, optic disk is generally hyperemic and edematous, but there are also cases having normal optic disk [6].

In this case, visual impairment of the patient started 10-15 days after anti-tuberculosis treatment, but she consulted our clinic 2 months after the visual loss. It is not definite that toxicity is related to isoniazid or ethambutol individually, because vision of the patient was at hand motion level and her optic disk was pale. However, it made us think that optic neuritis develops based on the multiple effects of both drug because of its bilateral feature, rapid progress of the clinic and paleness of the optic disk. In the treatment of isoniazid-related optic neuritis, drug intake can be stopped and 50 mg/day of pyridoxine can be administered for isoniazid toxicity. In general, discontinuance of the medication and pyridoxine treatment can improve the clinical presentation, but there are also cases that did not respond to pyridoxine treatment [10]. Despite the discontinuance of the medication and hydroxocobalamine vitamin treatment, the clinic presentation is generally irreversible in the picture of optic neuritis developing based on ethambutol toxicity [10]. However, it was scarcely reported that the clinical picture regressed after the early discontinuance of ethambutol and the hydroxocobalamine treatment [8]. In our case, no improvement of optic neuritis clinic was detected despite the hydroxocobalamine (B12) and pyridoxine treatment, because medication could not be discontinued due to the late application to the doctor.

Optic neuritis can develop based on the toxicity of ethambutol and isoniazid used in tuberculosis treatment but combine of these drugs toxicity occurs rarely. The clinical picture, which could be improved through the discontinuance of the medication and vitamin complex treatments, can be irreversible depending on high doses of drug intake, late discontinuance of the medication. Furthermore some comorbid situations such as chronic renal failure may reduce elimination of these drugs and normal doses could be toxic doses. We aimed to emphasize that ophthalmologic examinations should be performed frequently and the drug dosages should be adjusted carefully during the follow-ups of the patients receiving ethambutol and isoniazid medications in consideration of predisposing factors such as chronic renal failure in order to avoid permanent visual loss.

No acknowledgements to declare

No conflicts of interest to declare. This article is an original paper, not submitted currently to any other journal for publication.