Case report: A 58 y old woman was with diffuse large B-cell lymphoma presenting as acute pancreatitis. The patient was with no history of gallbladder stone or common bile conduct obstruction. After ruled out common causes of pancreatitis, such as bile stones, alcohol consumption and hypertriglyceridemia, she was highly suspect of secondary pancreatitis. Further test, imaging and pathology and immunohistochemistry confirmed diffuse large B cell lymphoma was a rate presentation of acute pancreatitis. Within a week after treatment, the patient’s abdominal pain has been resolved. After 1 w after treatment, the serum amylase level and serum lipase were decreased to 47 μ/l and 96 μ/l, respectively. Moreover, the C reaction protein and low density lipoprotein-cholesterol were regulated to normal level. A follow-up CT scan revealed a significant decrease in the size of retroperitoneal lymph and pancreas nodes. On the last follow up at 10 month, her abdominal pain was relieved completely.

Conclusion: Diffuse large B cell lymphoma can be a rate presentation of acute pancreatitis and timely evaluation can be effective in early diagnosis and successful treatment as in our case.

A 58 y old female was admitted to our hospital due to abdominal pain for half a month. The epigastric pain was continuous and companied with melena and reduction of bowl movement. The patient was mentally tired and pale. Abdominal examination shows epigastric region tenderness of rebound tenderness, and combined with Murphy’s sign. Bowl tone reduced to 1-2 times per minute. There was no history of gallbladder stone or common bile conduct obstruction. Patient denied any recent abusing of alcohol. She had two hospitalized days of regular pancreatitis treatment in local hospital but without improving, and transferred to our hospital. The local hospital chemical analysis showed that serum amylase, urinary amylase, white cell count and hemoglobin was 1256 U/L, 7784 U/L, 7.5 × 109/L and 76 g/L, respectively. Moreover, neutrophils account for 80.2% of all leukocytes. Ultrasonography result of abdominal showed swelling of the pancreas and low echo-level mass in the pancreas.

She was re-examined in first day after transferred to our hospital. Chemical analysis was showed as follows: serum amylase, 371 U/L; serum lipase 5515 U/L; C reaction protein, 23.44 mg/L; total cholesterol, 2.8 mmol/L; triglyceride, 0.42 mmol/L; high density lipoprotein-cholesterol, 0.69 mmol/L; low density lipoprotein-cholesterol, 1.92 mmol/L. In addition, computed tomography and nuclear magnetic imaging of epigastric zone showed that there were multiple space occupy lesions in liver, pancreas and both kidneys. The main causes of acute pancreatitis including bile stones, alcohol consumption and hypertriglyceridemia were ruled out. Therefore, secondary pancreatitis is highly suspected. A 1.5 cm × 2.5 cm flat protrusion lesion in descending duodenum, which was soft and with anabrosis on surface, was observed and detected by further gastroscopy (Figure 1). 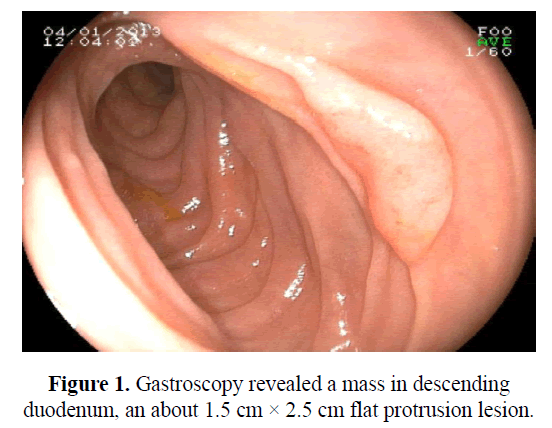 Biopsy was taken from descending duodenum mucosa. Light microscope image was applied for malignant tumor, and tumor original from lymphatic hematopoietic system is un-excluded (Figure 2). Immunohistochemistry experiments confirmed that the tissue was diffused large B cell lymphoma with CD20 (++ +), CD79α (+++), Vimentin (++), CD45RO (+) (Figure 3). Bone marrow cytological examination showed no sign of bone marrow invasion by tumor cells. The patient was transferred to department of hematology for chemotherapy. A therapeutic regimen of cyclophosphamide+dobixine+vincristine +prednisone (CHOP) was developed for her. Within a week after treatment, the patient’s abdominal pain has been resolved. After 1 week after treatment, the serum amylase level and serum lipase were decreased to 47 μ/l and 96 μ/l, respectively. Moreover, the C reaction protein and low density lipoproteincholesterol were regulated to normal level. A follow-up CT scan revealed a significant decrease in the size of retroperitoneal lymph and pancreas nodes. On the last follow up at 10 month, her abdominal pain was relieved completely. 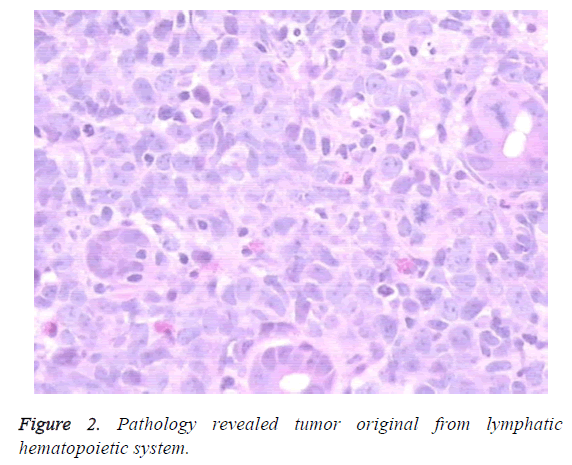 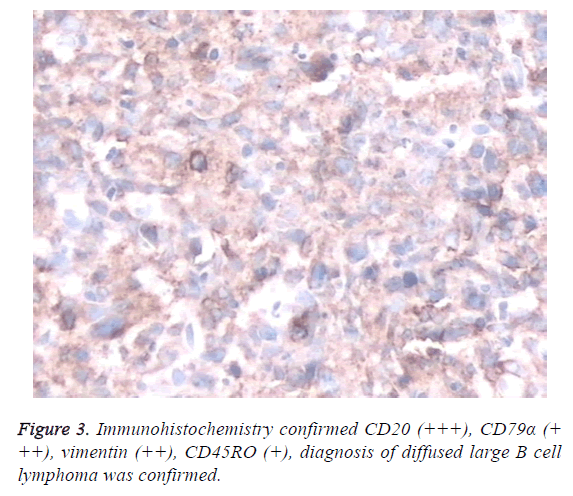 DLBCL is a type of white blood cell responsible for producing antibodies [4]. More than 50% DLBCL patients have some extranodal involvement at diagnosis [5]. The cause of diffuse large B-cell lymphoma is not well understood. In prevent study, immunodeficiency and Epstein-Barr virus were found to be risk factors of DLBCL [6]. In addition, DLBCL was onset primarily in lymph node or extranodal and more than 50% patients were with extranodal invasion related to any organs [7]. About 15%-20% patients were with extranodal invasion organs of gastrointestinal track and bone marrow [8]. Core biopsies may be appropriate as the only diagnostic test in emergency treatment [9]. Moreover, minimal immunohistochemistry (CD45, CD20, and CD3) is mandatory [10]. Acute pancreatitis associated with pancreatic lymphoma is rare [4]. Only a few cases had been reported pancreatitis associated with B-cell lymphoma [11]. Acute pancreatitis is often described as a complication of adenocarcinoma which was the secondary to obstruction [12]. In addition, it was also presentation of gastric lymphoma, but not of DLBCL. Common chemical analysis in pancreatitis is limited to diagnosis the complications and look for uncommon etiologies.

DLBCL was without a specific presentation, thereby, the diagnosis is often delayed [13]. In previous studies, the incidence of DLBCL was high among male and elderly people aged over 60 years [14-16]. So far, the diagnostic criteria of pancreatic primary lymphoma included: (1) The lesion is confined to the pancreas, and no lesion was found in liver and spleen; (2) There was no imaging performance for swelling of lymph node; (3) The count of white blood cell was normal. The clinical feature of pancreas non-hodgkin’s lymphoma mainly involved abdominal pain and pancreatic mass, thereby the disease easy to be misdiagnosed pancreatic cancer. Pathologic diagnosis was key for distinguishing pancreatic carcinoma and lymphoma [17]. In this case, the patient is presenting typical pancreatitis symptoms such as abdominal pain, elevation of blood amylase, urine amylase. Ultrasound in local hospital showed swollen of pancreas, treat as usual pancreatitis is inefficacy. A computed tomography and nuclear magnetic imaging of epigastric zone was processed in our hospital and showed that multiple space occupy lesions in liver, pancreas, both kidneys, secondary pancreatitis is highly suspected. To screen the primary tumor, gastroscopy revealed a mass in descending duodenum, biopsy was taken from the mass. Diagnosis been confirmed after pathology and immunohistochemistry.

CHOP was a standard treatment for non-Hodgkin’s lymphoma patients. For this standard chemotherapy, pancreatic lymphoma always responded well [18]. Our patient showed acute abdominal pain with higher risk, and treated with high-dose inductive chemotherapy. The follow-up results showed that the size of pancreas, peripancreatic and retroperitoneal lymph nodes were all decreased after first cycle chemotherapy. In addition, the abdominal pain was resolved, the lipase and serum amylase level was decreased to normal level. Thereby, it’s important to include the DLBCL in the different diagnosis of acute pancreatitis patients, and also give the timely and proper treatment.

Most studies researched serum amylase and serum lipase level [2]. The patient in this study was tested several indexes, including serum amylase, urinary amylase, white cell count and hemoglobin before transferred to our hospital. It might be one reason of misdiagnose. In this study, serum amylase, serum lipase, C reaction protein, total cholesterol, triglyceride, high density lipoprotein-cholesterol and low density lipoproteincholesterol were all checked. It might provide more clinical data for diagnose and treatment. Combined with biopsy, gastroscopy and above indexes, the patient get better diagnose and treatment.

Diffuse large B cell lymphoma can be a rate presentation of acute pancreatitis and timely evaluation can be effective in early diagnosis and successful treatment as in our case. In addition, related indexes. Including serum amylase level, serum lipase, C reaction protein and low density lipoproteincholesterol should be closely monitored. However, there are some limitations in this study. Diffuse large B cell lymphoma presenting as acute pancreatitis was fewer, more information for accurate diagnosis and treatment will be collected for this area in the future.