A case of post-vaccination tubercular abscess in thigh of an infant.

We report a rare case of post vaccination tubercular soft tissue abscess on a lateral part of thigh in an immunocompetent infant without underlying source of infection. A soft tissue cold abscess usually results from an underlying bone infection; however, a positive case due to intramuscular hexavalent vaccination was presented in our case.

To determine causal relationship of adverse event following vaccination with specific vaccine is often challenging. Most of the abscess formations at the site of vaccination are pyogenic in nature caused by bacterial pathogen; common causative agents include Staphylococcus aureus, Escherichia coli, Klebsiella pneumonia, Pseudomonas spp. Rarely rapid growing nontuberculous mycobacteria (NTM) and M. bovis are implicated as a cause due to contaminated needles or probable use of tap water, the common reservoir of M. chelonae and M. fortuitum. Mycobacterium tuberculosis causing abscess formation at vaccination site is very rare complication and has been reported by few authors [1-4].

Intramuscular (IM) administration of vaccine contributes up to 21.5%; a significant proportion of post vaccination abscess cases [5]. Most of reported cases are attributed to use of a contaminated needle/ syringe and lack of aseptic measures while administration [6]. Even though IM injections are a minor procedure, needs asepsis and appropriate administration technique to prevent rare but serious complications.

A healthy four months old male child developed swelling and erythema at the site of an injection on anterolateral part of right thigh. The lesion was appeared four days following his third dose of intramuscular Hexavalent vaccine (combination of Diphtheria toxoid-tetanus toxoid-acellular pertusis, inactivated Poliomyelitis, Hepatitis B and H influenza type b vaccines) administered at some private clinic. The previous vaccinations including Hexavalent vaccine first, second dose and BCG at birth were well tolerated without any post-vaccination complications. There was no past history of trauma and/or any disease. The child was thriving well with adequate weight gain.

On clinical examination done one week post vaccination showed erythematous swelling of 2 × 1 cm size, over anterolateral aspect of right thigh with mild to no tenderness. Movement of legs were not restricted. Vital signs remained normal and afebrile. Child showed no toxic features except slight irritability and discomfort. Ultrasound of right thigh showed intramuscular liquefied hematoma. The lesion progressively enlarged over next one and half months to form an abscess (around 40-50 cc) measuring approximately 5.0 × 3.0 × 5.3 cm. Local inguinal lymph nodes were enlarged. No underneath bone involvement noted.

Around same time needle aspiration was done as the lesion did not respond to empirical antibiotic therapy with Intravenous ampicillin-sulbactum for one week followed by oral amoxyclav for another week.

There was no evidence of primary focus of tuberculosis on clinical and radiographic examination. Haematological parameters were normal except mild elevation of lymphocyte count. Immunodeficiency disorders were ruled out by normal haemoglobin; complements and Immunoglobulin profile.

Localised recollection of fluid was started requiring Incision and drainage, 3 wks. after commencement of ATT. Fluid sample was negative for AFB on staining and culture was not done. Antibiotic course was given to cover procedural risk of bacterial infection. Swelling turned into abscess (Figure 1). 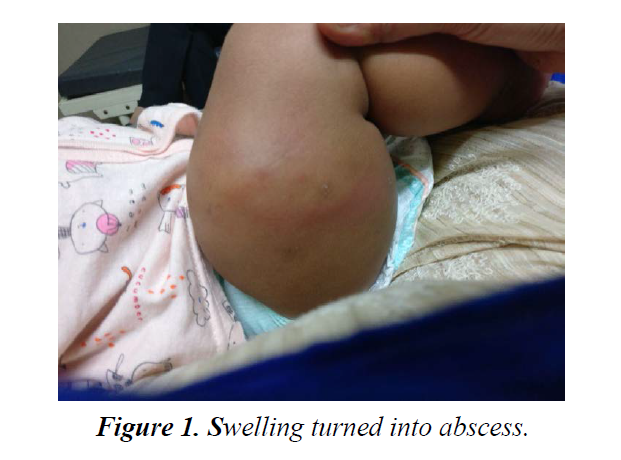 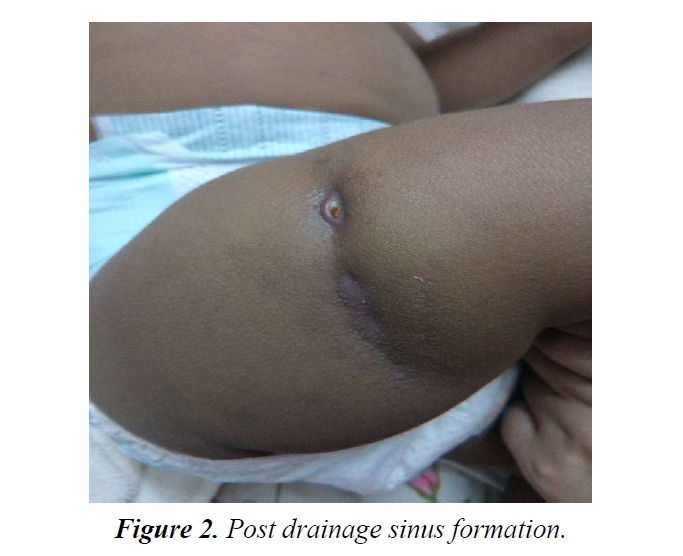 A child tolerated ATT well. Sinus slowly started healing after 4 months of ATT and showed complete healing by 5th month (Figure 3). ATT was given for total period of 6 months and by this time child was completely recovered with no residual lesion. 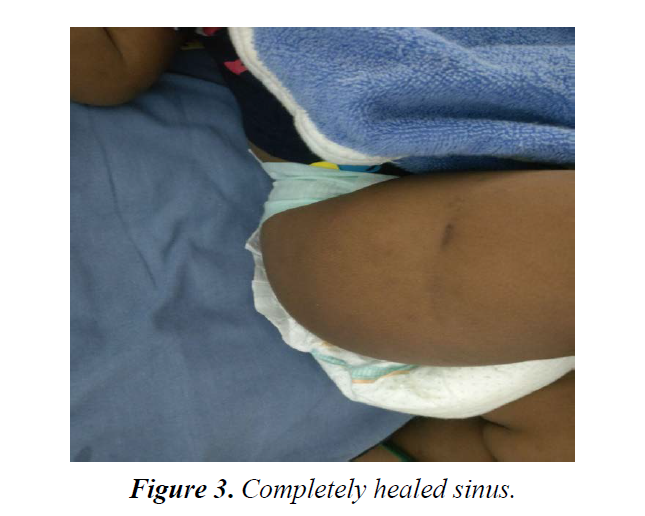 Hexavalent vaccine has shown good efficacy and is one of the safest vaccines available. As first two doses of hexavalent vaccines were well tolerated, vaccine cannot be completely attributed as a cause for complication.

Most of such complications are secondary to direct spread from underlying bone or tissue infection and contaminated vaccine use with improper administration technique. Few authors have suggested rare possibilities such as inadvertent intramuscular injection of the BCG vaccine, direct inoculation of injection site with coughed up tuberculosis bacilli by infected nursing staff, needle introducing tubercle bacilli from skin surface to injured tissue etc. [2,4,7-9].

Possibility of contaminated needle use, lack of aseptic precautions and inadvertent BCG vaccination were ruled by parents who accompanied baby at the time of vaccination.

Thus, we are unable to explain origin of infection and also its association with vaccine administration. Pharmacovigilance of adverse events following immunization are essential with newly introduced vaccines recommended for a routine immunization. A large scale surveillance studies are needed to detect rare and serious adverse events.

To conclude, Tuberculosis abscess in immunocompetent infant is less common and poses diagnostic challenge as it’s not considered in initial differential diagnosis. High degree of clinical suspicion is required for early diagnosis and complete treatment for better outcome.