2-Methoxyestradiol (2ME2) is a natural metabolite of 17-β-estradiol exerting both antiproliferative and antiangiogenic characteristics. Due to limited bioavailability, analogues of 2ME2 were designed, synthesized and evaluated for improved in vitro antiproliferative activity as well as bioavailability. 2-Methoxyestradiol-bis-sulphamate (2-MeOE2bisMATE) is an analogue of 2ME2 which was produced by sulphamoylation of the two hydroxyl groups on carbons 3 and 17. The aim of this in vitro study was to evaluate the influence of 2- MeOE2bisMATE on morphology, apoptosis and autophagy induction in an oesophageal carcinoma (SNO) cell line by means of transmission electron microscopy (TEM) and flow cytometry (cyto-ID and LC3 autophagy detection assays). In 2-MeOE2bisMATE-treated cells, features of both apoptosis and autophagy such as the presence of apoptotic bodies and autophagy vesicles were observed using the transmission electron microscopy. A significant increase in the quantity of autophagy vesicles and LC3 levels were observed in 2- MEOE2bisMATE-treated cells. This in vitro study demonstrates that 2-MeOE2bisMATE induces both apoptosis and autophagy which was revealed by the increase in apoptosis- and autophagy-associated morphology, as well as by an increase in the measure of autophagy vesicles and LC3 levels in SNO cells. From data observed from this study, 2-MeOE2bisMATE is shown to be a potential anticancer agent; further in vitro research is, however, warranted.

During the previous few decades 2-methoxyestradiol (2ME2), the biological metabolite of 17β-estradiol, has been shown to be a potential anticancer drug with the ability to inhibit proliferation and angiogenesis in vitro and in vivo [1,2,3,4,5,6,7]. The antiproliferative activity of 2ME2 was found to be time- and concentrationdependent, as well as estrogen receptor (ER) independent [6,8]. 2ME2 binds to the colchicine binding site on tubulin, causing cells to undergo mitotic arrest which subsequently leads to the induction of cell death [3,9,10]. Although 2ME2 has been shown to have antiproliferative and anti-angiogenic properties, human clinical trials for the treatment of breast cancer, prostate cancer and multiple myeloma have shown that high oral doses of 2ME2 (registered as Panzem® by Entremed, Inc. (Rockville, MD)) are needed per day in order to significantly reduce the growth of certain tumours [11,12,13,14]. 2ME2 has a low bioavailability and it is rapidly inactivated by 17β- hydroxysteroid dehydrogenase type 2 and by conjugation of both 3- and 17-hydroxyl moieties to form glucuronides [15,16,17].

In an attempt to address the problem of low solubility and bioavailability, new nanocrystal dispersion (NCD) formulation of 2ME2 has been developed [18]. Although a higher plasma levels of about 3-4% was observed in the nanoparticulate dispersions when compared to the usual 2ME2 formulations, the bioavailability still remains very low [18].

2-Methoxyestradiol-bis-sulphamate (2-MeOE2bisMATE) is a bis-sulphamoylated derivative of 2ME2, which is currently being researched as a potential anticancer drug [19,20]. Recent in vitro studies from our laboratory and from other researchers, have found that 2-MeOE2bisMATE inhibits cell growth in estrogen receptor negative and positive cells, as well as multiple drug resistant cell lines [21,22,23,24]. 2-MeOE2bisMATE inhibited the growth of human breast adenocarcinoma ER- cell line (MDAMB- 231) with an IC50 of 0.33μM [24]. Suzuki et al. (2003) showed that treatment of MCF-7 cells resistant to doxorubicin and mitoxantrone with 1μM of 2- MeOE2bisMATE inhibited cell proliferation [25].

In view of the fact that the exact mechanism of action of 2-MeOE2bisMATE is still not well defined especially in oesophageal carcinoma cells, this in vitro study was conducted to further contribute to the action mechanism of 2- MeOE2bisMATE in these cells.

Since 2-MeOE2bisMATE is not commercially available, the compound was synthesized by Prof. Vleggaar from the Department of Chemistry (University of Pretoria, Pretoria, South Africa). All required reagents of cell culture analytical grade were purchased from Sigma (St. Louis, United States of America) unless otherwise specified. Cyto-ID autophagy detection kit and the Rabbit polyclonal anti-LC3B conjugated to DayLight 488 were bought supplied by BIOCOM biotech (Pty) Ltd. (Clubview, South Africa).

Cells were maintained in Dulbecco’s Modified Eagle’s Medium (DMEM) supplemented with 10% heatinactivated fetal calf serum (FCS) and 100 U/ml penicillin G, 100 μg/ml streptomycin and 250 μg/l fungizone. Cells were cultured in 25 cm2 tissue culture flasks at 37°C in a humidified atmosphere containing 5% CO2 and left over night for attachment. A stock solution of 2- MeOE2bisMATE with a concentration of 2.0x103M was dissolved in dimethyl sulphoxide (DMSO) and kept at - 20°C. Appropriated controls were included for each experiment. All experiments included control samples in the form of cells propagated in growth medium, cells treated with the same volume of DMSO used to expose cells with 2-MeOE2bisMATE, as well as positive controls for apoptosis (0.1μg/ml actinomycin D) and autophagy (tamoxifen 20μM). A concentration of 0.4μM and an exposure period of 24 hours were selected; since it was observed in our prior study that it is in this range that 2-MeOE2bisMATE significantly decreased cell proliferation of SNO cells [27].

TEM allows imaging of inside cell structures with a resolution power of about 0.1-0.4 nm, therefore this study was conducted in order to study the effects induced by 2-MeOE2bisMATE on SNO cells [28]. SNO cells were seeded at a density of 500 000 cells per 25cm2 flask. After 24 hours of cell attachment, the medium was discarded and the cells were exposed to 2-MeOE2bisMATE, and appropriate controls were included. The experiment was terminated by trypsinizing the cells, fixing them in 2.5% glutaraldhyde in 0.075M phosphate buffer (pH 7.4) and afterwards washing them with 0.075M phosphate buffer. Subsequently, cells were fixed in 0.25% aqueous osmium solution and rinsed with increasing concentrations of ethanol (30%, 50%, 70%, 90%, and 100%) and embedded in Quetol resin. Ultra-thin sections were prepared using a microtome and then they were mounted on a copper grid. Samples were contrasted with 4% uranyl acetate and Reynolds’ lead citrate and viewed with a Multi-purpose Philips 301 TEM (Electron Microscopy Unit, Pretoria, South Africa).

The LC3 antibody detection method was utilized to determine whether 2-MeOE2bisMATE induces autophagy in SNO cells [30]. Exponentially growing SNO cells were seeded at 500 000 cells per 25cm2 flask. After 24 hours of attachment, medium was discarded and cells were exposed to 2-MeOE2bisMATE. Following incubation the cells were trypsinized and washed with cold PBS. Cells were fixed with 0.01% formaldehyde in PBS for 10 minutes, pelleted and were then resuspendend in 200μl PBS. To further fix and permeabilize the cells, 1ml of ice-cold methanol (-20°C) was added to the solution in a dropwise manner. Cells were then pelleted and washed twice with cold PBS. After washing, the cells were pelleted and 0.5ml of the antibody cocktail was added and then incubated for 2 hours at 4°C in the dark. Following 2 hours of incubation, the cells were washed trice with a wash buffer (PBS/0.05% Triton X-100/1%BSA) and then analyzed with CXP software (Beckman Coulter South Africa (Pty) Ltd). Data from 30 000 events was analyzed using Cyflogic 1.2.1 software ((Perttu Terho & Cyflo Ltd).

Autophagy detection analysis (anti-LC3B & cyto-ID) assays were analyzed quantitatively, while TEM was analyzed qualitatively. The ANOVA students’ t-test were used to determine the analytical variation in experimental procedures and biological variations within each experiment. For flow cytometric data no less than 30 000 events were counted for each sample and three independent experiments were conducted. Data produced were analysed using Cyflogic 1.2.1 (Perttu Terho & Cyflo Ltd). 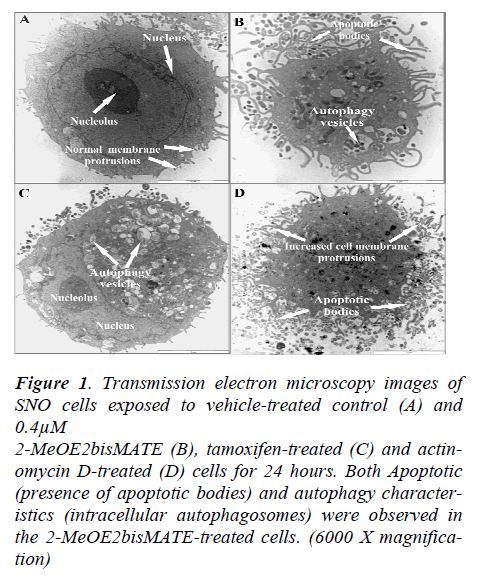 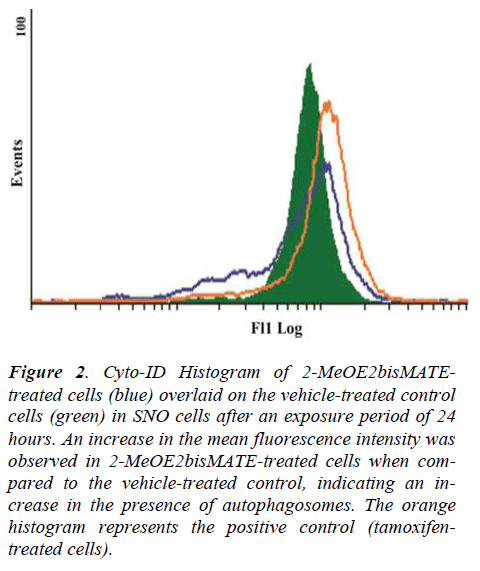 Figure 2. Cyto-ID Histogram of 2-MeOE2bisMATEtreated cells (blue) overlaid on the vehicle-treated control cells (green) in SNO cells after an exposure period of 24 hours. An increase in the mean fluorescence intensity was observed in 2-MeOE2bisMATE-treated cells when compared to the vehicle-treated control, indicating an increase in the presence of autophagosomes. The orange histogram represents the positive control (tamoxifentreated cells).

Tamoxifen was used as a positive control agent known for induction of autophagy.

A conjugated rabbit polyclonal anti-LC3B antibody assay was used to test for autophagy. The exposure of SNO cells to 2-MeOE2bisMATE resulted in an increase in LC3 levels, as seen by the shift to the right on the histogram, when compared to the vehicle-treated control (Figure 3). 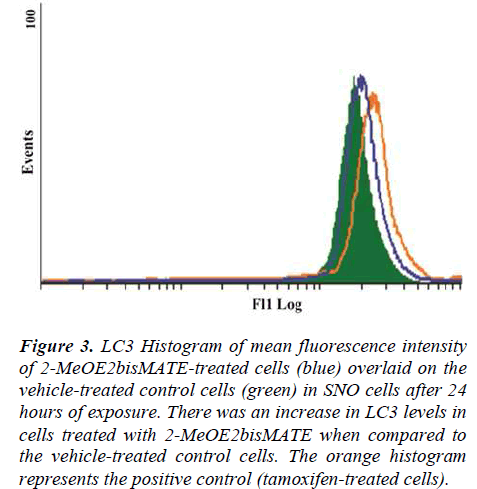 Figure 3. LC3 Histogram of mean fluorescence intensity of 2-MeOE2bisMATE-treated cells (blue) overlaid on the vehicle-treated control cells (green) in SNO cells after 24 hours of exposure. There was an increase in LC3 levels in cells treated with 2-MeOE2bisMATE when compared to the vehicle-treated control cells. The orange histogram represents the positive control (tamoxifen-treated cells).

.Results obtained using TEM as well as our previous morphological studies revealed autophagy was induced by 2- MeOE2bisMATE in SNO cells. Autophagy is a process whereby a cell degrades its intracellular components inside lysosomes [31]. It is one of the cell’s two major pathways through which proteins are degraded and it is the only pathway known for degrading cellular organelles [32-34]. In normal cells, autophagy maintains cellular homeostasis by removing excessive proteins and damaged organelles [32]. Autophagy can be induced by various conditions such as starvation, growth factor withdrawal and stressors [32,35,36]. Generally, autophagy is a mechanism of survival for cells during periods of stress and starvation, but there are times where autophagy can progress to cell death [37].

Lorin et al. (2009) demonstrated that 2ME2 induces both apoptosis and autophagy of ewing sarcoma cells, similarly Azad et al. (2009) demonstrated that treatment of human glioblastoma astrocytoma epithelial-like cell line (U87), human cervical adenocarcinoma cells (HeLa), and transformed human embryonic kidney cells (HEK293) with 2ME2 induced both types of cell deaths [38,39]. In this study the cyto-ID autophagy detection and the conjugated rabbit polyclonal anti-LC3B antibody assays were conducted to confirm our previous results of autophagy induction in SNO cells by 2-MeOE2bisMATE. These assays revealed an increase in the presence of autophagosomes and in the LC3 levels.