Background Jawarish Shahi (JS) is a compound Unani Pharmacopoeial formulation indicated for Khafqan (Palpitation), Nafkhe Shikam (Flatulence) and Waswas (Insanity; false perception and hallucinations). However, JS has not been evaluated for its safety. Therefore, present study was conducted to evaluated long term toxicity / safety of this Unani formulation in India during the year 2016-17. Objective The following study was carried out to study the 180 days repeated dose toxicity of JS in SD rats. Methods Study was carried out on SD rats of both sexes. Animals were divided into various groups (n=15). JS was orally administered at a limit dose of 2000 mg/kg bw/day for 180 days. After completion of 180 days blood samples were collected for haematological and biochemical analysis and animals were sacrificed and organs were harvested for weight determination and histopathological evaluation was carried out. Results Animals in groups treated with JS did not show any abnormal behaviour or clinical signs indicative of systemic toxicity based on functional observation parameters observed throughout study duration. There was no toxicologically significant alteration observed in relative organ weights, haematological and biochemical parameters of control and JS treated rats of either sex. The findings were further corroborated by histopathological studies. Conclusion No toxicologically significant changes were observed with respect to clinical signs of toxicity, body weight, feed intake, haematology, biochemistry profile, gross necropsy and histopathology in JS treated rats as compared to control group. It may be concluded based on above observations that No Observed Adverse Effect Level (NOAEL) of JS in SD rats is >2000 mg/kg bw.

Traditional herbal medicine has been recently gaining recognition among population [1]. The characteristic feature of traditional system of medicine is their holistic approach towards therapy with an emphasis on strengthening the healing ability of one’s body [2]. Despite gaining recognition as relatively safer therapy, adverse effects of herbal products have been reported mainly due to issue of quality. Contamination and adulteration have been reported in many herbal products leading to serious toxicities [3,4]. To achieve clinical success, the traditional medicines need to attain high standards of quality, safety and efficacy. Diverse approaches have been tested to evaluate the toxicity potential of chemicals, drugs including traditional medicines [5-7]. Recently, several metabolomic studies have been conducted to prove the efficacy and safety, explore the underlying mechanisms, and identify the potential biomarkers to understand the mechanism of action of traditional medicines with useful results especially on traditional Chinese medicine [8-10]. Evaluation of toxicity potential in animals is still indispensable step before initiating the clinical trial [11-13]. Strategy of the development of alternative methods should be more directed towards the refinement or reduction of in vivo tests [14].

Jawarish Shahi (JS) is one such traditional Unani formulation. It is a compound Unani pharmacopoeial formulation mentioned in the National Formulary of Unani Medicine, PART-I and other classical text of Unani system of medicine. Jawarish Shahi contains herbs like Halela (Termanalia chebula), Amla (Emblica officinalis), Kishneez (Coriaandrum sativum), Elaichi Khurd, (Elettaria cardamomum), and Bed Mushk (Salix caprea). It is recommended for treatment of Khafqan (Palpitation), NafkheShikam (Flatulence) and Waswas (Insanity; false perception and hallucinations). However, safety studies of JS have not been reported in literature. Therefore, the present study was carried out to evaluate 180 repeated dose toxicity of JS in rats.

Sprague Dawley rats (120 ± 20 g) were used for the study. Rats were obtained from National Institute of Nutrition, Hyderabad, India. The selected females were nulliparous and non-pregnant. Rats were housed in polycarbonate cages in the air conditioned room maintained at the temperature of 22°C ± 3°C and relative humidity of 30-70%, with a 12:12 h light/dark illumination cycle [16]. CPCSEA guidelines of laboratory animal care were followed throughout the experiment [17]. Protocol of the study was approved by the Institutional Animals Ethics Committee vide protocol no. CRIUM/IAEC/2014/02/P02. Animals were provided with standard feed pellets (National Institute of Nutrition, Hyderabad) and water ad libitum, unless stated otherwise. Animals were acclimatized to the laboratory conditions for one week before using them for experiment.

JS used in present study was prepared as per the standard Pharmacopoeial procedure in the GMP certified pharmacy of CRIUM Hyderabad.

Single dose of JS at 2,000 mg/kg bw (as per the Limit dose of ICH) was used for the study [18] which is approximately two times of therapeutically equivalent dose. Present study was conducted as per the limit test guidance of OECD-452 at a single dose of 2000 mg/kg bw per day, primarily by considering the low toxicity potential (considering the long term clinical use of Jawarish Shahi without any serious adverse effect reported so far) as well as absence of any systemic toxicity in a sub-chronic (90-days) toxicity study conducted in our lab (unpublished data) at two dose levels i.e., 1028 and 2000 mg/kg bw per day.

The 180-day repeated dose oral toxicity study was performed according to the OECD test guideline-452 [16]. Male and female Sprague Dawley rats were divided into two groups with 30 animals (15 males+15 females) in each group (Table 1). All the experimental animals were observed for mortality and morbidity twice a day, throughout the study duration. Detailed clinical observations (i.e., functional observation parameters such as behavioural, stereotypy, motor and autonomic signs like salivation, lacrimation, piloerection etc.) were made periodically to detect signs of toxicity, at the same time (1h after vehicle or drug administration). Body weight of the animals was recorded once a week. Average feed intake for both sexes were recorded at weekly interval by weighing the amounts of feed given to a cage group and leftovers on the next day. At the end of the treatment period, the overnight fasted (water provided ad-libitum) rats were anaesthetized with isofluorane inhalation (EZ Anaesthesia-1339), blood samples were collected by retroorbital puncture in the EDTA vacutainers (for haematological) and serum vacutainers (for biochemical and electrolyte analysis). 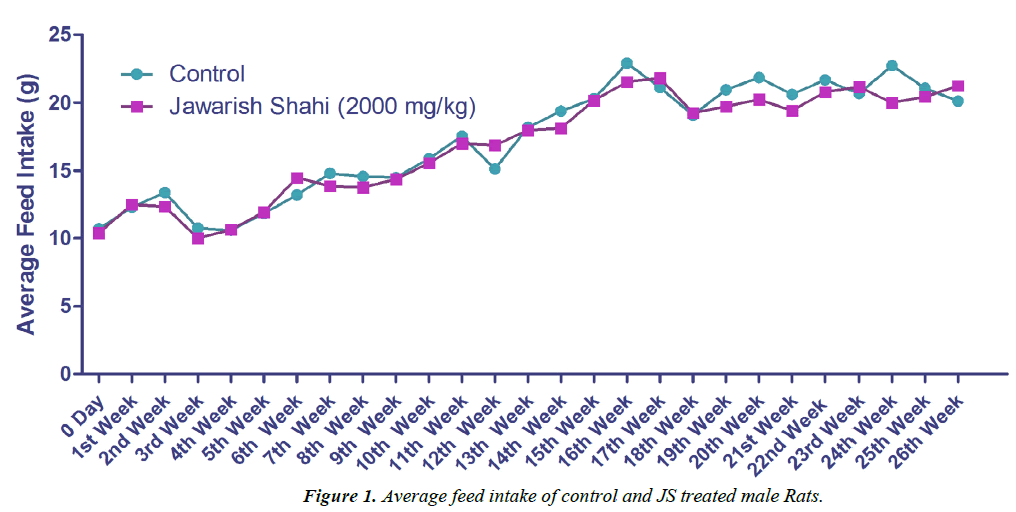 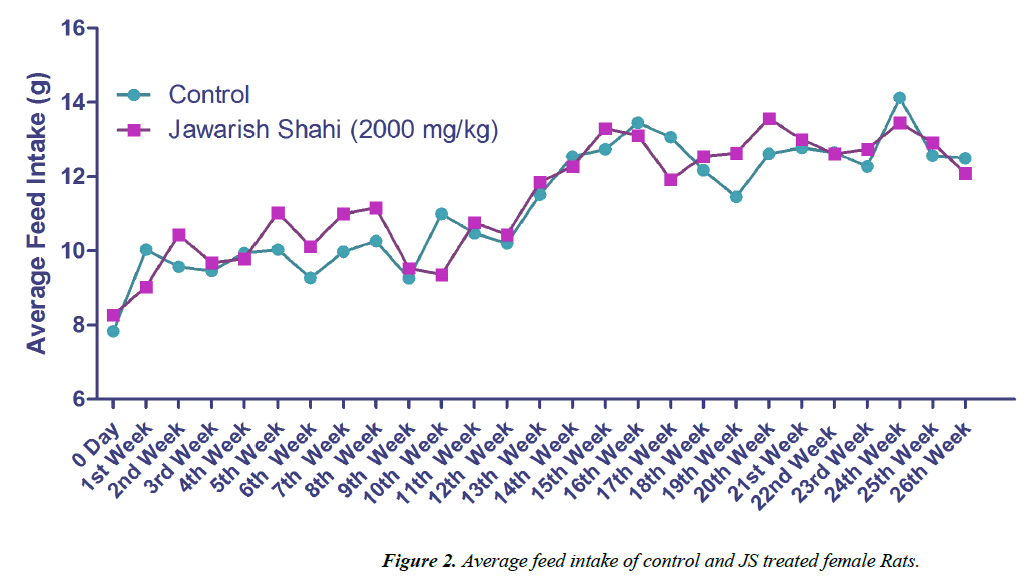 Table 2: Effect of JS on Haematological Parameters in Rats.

Table 3: Effect of JS on Blood Biochemical Parameters in Rats.

Table 4: Effect of JS on serum electrolytes in rats.

The study was carried out to establish safety profile of JS following administration for 180 consecutive days in SD rats. No mortality was observed in any group throughout the study duration of 180 days. Rats in both control and JS treated groups did not show any sign of intoxication during study period. 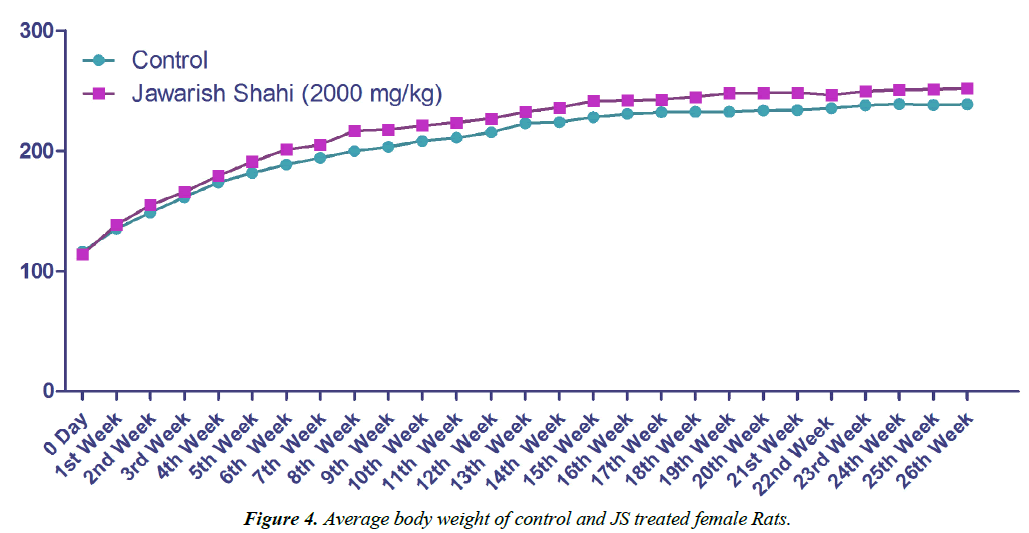 Evaluation of haematological parameters is used to determine the extent of the adverse effect on hematopoietic system. This evaluation is important because changes in the haematological parameters have significant correlation to human toxicity upon translation of preclinical data [20]. Observations of hematological parameters did not reveal any treatment-related alterations in the present study (Table 2). Treatment with JS did not cause alteration in hematological profile (i.e., RBC, WBC, Hb, HCT) as well as platelet count indicating no adverse effect on blood cells. Although lymphocyte count was significantly decreased in JS treated male rats the values remained within normal physiological range and hence do not carry toxicological significance [17].

The liver is the main metabolic organ which undertakes metabolism of drugs and detoxification of many carcinogens and toxins in the body. Drug-induced hepatic toxicity can lead to serious consequence in the form of cholestasis, acute hepatitis, or even cirrhosis. Reactive oxygen species generated by metabolic intermediates of Xenobiotics, can generate reactive oxygen species through CYP450 enzyme families. These can also activate inflammatory cells through NADPH oxidases leading to necrosis [21]. Hepatic toxicity can be measured as altered ALT, AST, ALP, and bilirubin levels [22]. Elevation of ALT and/or AST beyond three times of upper value of normal range accompanied by two fold alteration in total bilirubin level signifies liver damage [23,24]. However, in the present study alteration observed in ALT, AST, Bilirubin levels were marginal and hence may not be considered toxicologically relevant (Table 3).

Albumin synthesis is one of the functions of liver, thus, decreased albumin level has a positive correlation with prognosis of liver disease. Bilirubin occurs in both conjugated (glucuronide) as well as unconjugated form. Balance between conjugate and unconjugated form is a measure of reflects balance between balance between production and hepatobiliary excretion. Higher than normal bilirubin level is observed in haemolysis, altered erythropoiesis as well as in muscular injury. Further, conjugated hyperbilirubinaemia signifies liver disease and biliary obstruction [25]. In the present study, all groups exhibited normal values of albumin, total bilirubin and conjugated bilirubin.

Drug-induced nephrotoxicity is a persistent challenge in clinical medicine with its incidence reported to be as high as 60 percent. The potential of drugs to induce toxicity is generally heightened in the kidney microenvironment. The BUN and Creatinine are screening tests of renal function. BUN and Creatinine are handled by glomerular filtration and also essentially reflect glomerular filtration rate [26]. In the present investigation, renal function markers BUN and creatinine levels were found to be well within the normal range for JS treated rats suggesting that JS did not cause any adverse effect on renal function.

Elevated levels of low density lipoprotein and reduced levels of high density lipoprotein along with corresponding high levels of cholesterol is reported to be associated with higher vascular morbidity and mortality. Similarly, elevated TG levels can also lead to higher vascular risk [27]. In the present study, although, value for total cholesterol was significantly increased in female rats treated with JS, the values remained within physiological range. Further, rise in cholesterol level was not associated with any adverse change in HDL, LDL or VLDL level and therefore, may not warrant further investigation. The serum electrolyte levels of JS treated animals were also within normal physiological range, suggesting that JS did not alter ion homeostasis in rats (Table 4).

Organ weight is a sensitive indicator of drug toxicity, since significant alteration in organ weight between control and drug treated groups. Changes in organ weight often precede morphological changes and hence may be observed even in the absence of latter [28]. Relative organ weight data of JS treated male and female rats at the end of 180 days dosing period did not show any significant difference from that of control (Figure 5a and 5b). 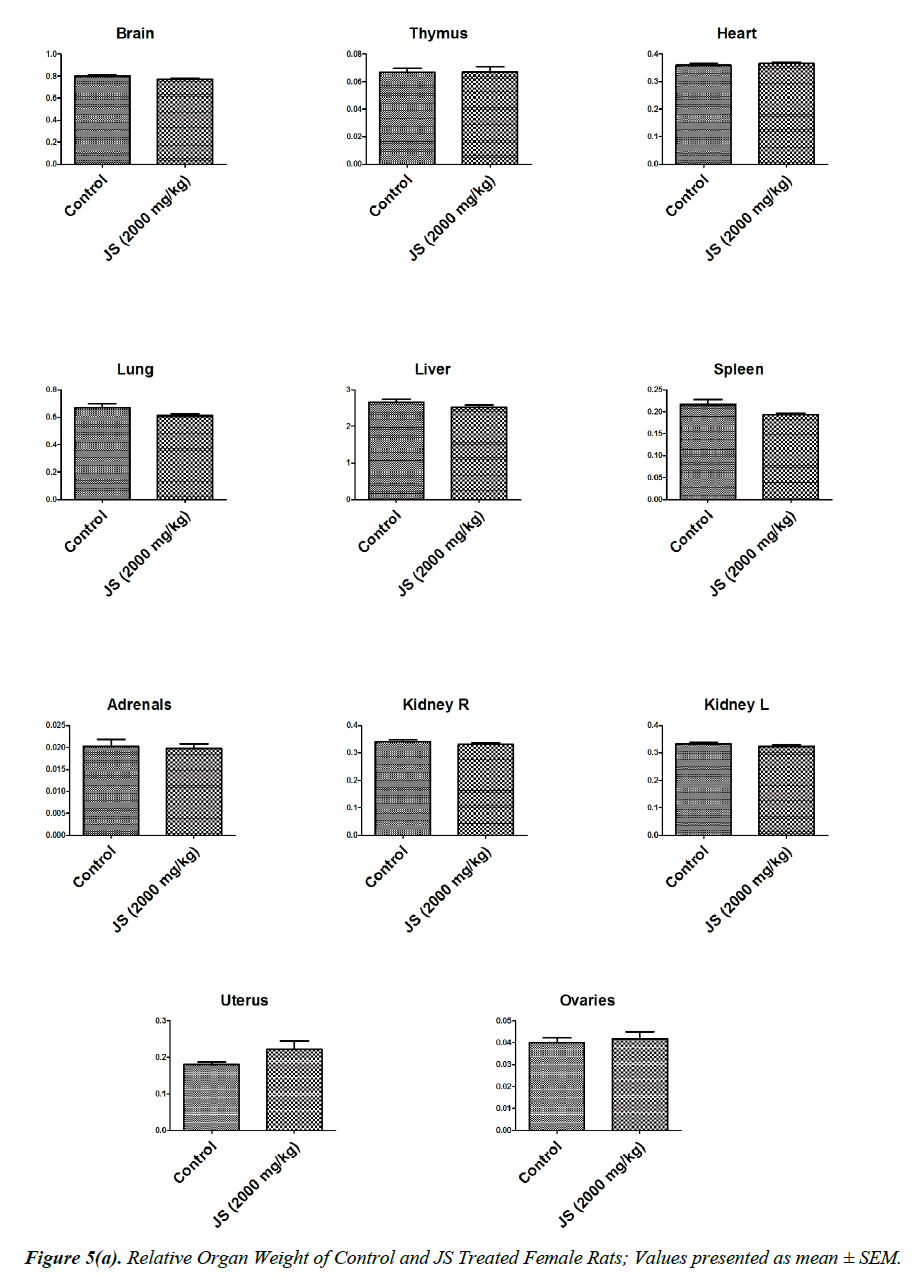 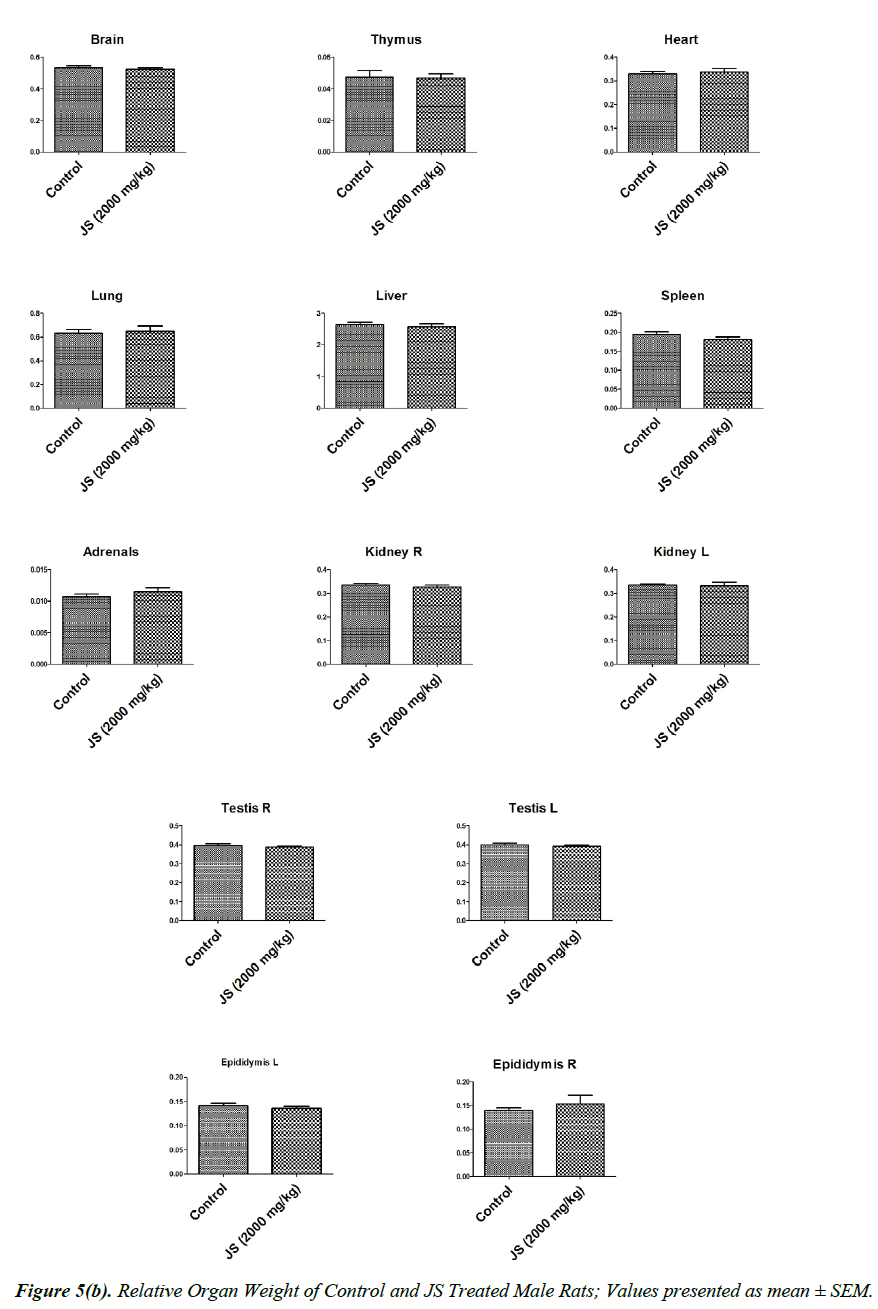 The gross necropsy of all animals was carried out at the end of study followed by histopathological evaluation of hematoxylin and eosin-stained tissue sections [29]. The collected organs including vitals upon histopathological examination were found histologically normal except few changes of histological significance were observed in lungs and livers. In both lungs and livers the various histological changes observed in the experimental groups were also present in the control group and hence may not be attributed to treatment with JS (Figure 6a, 6b and 6c). 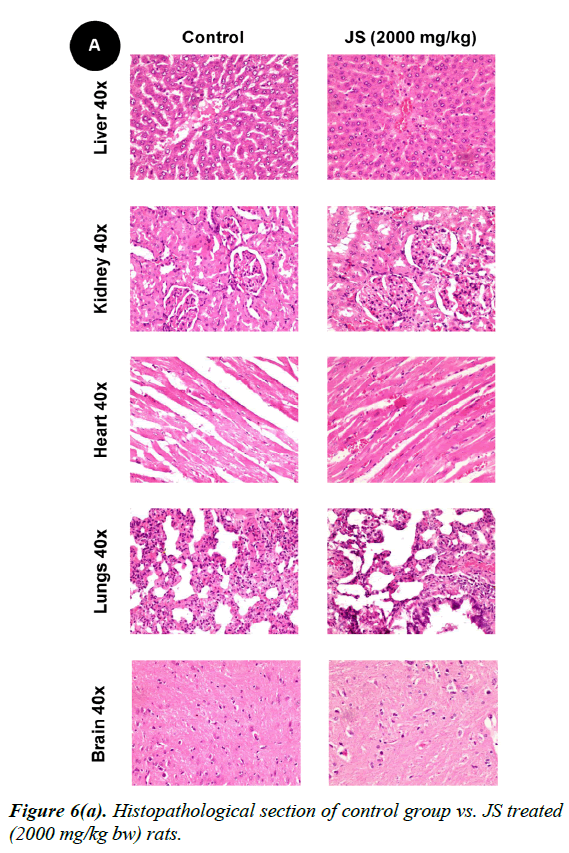 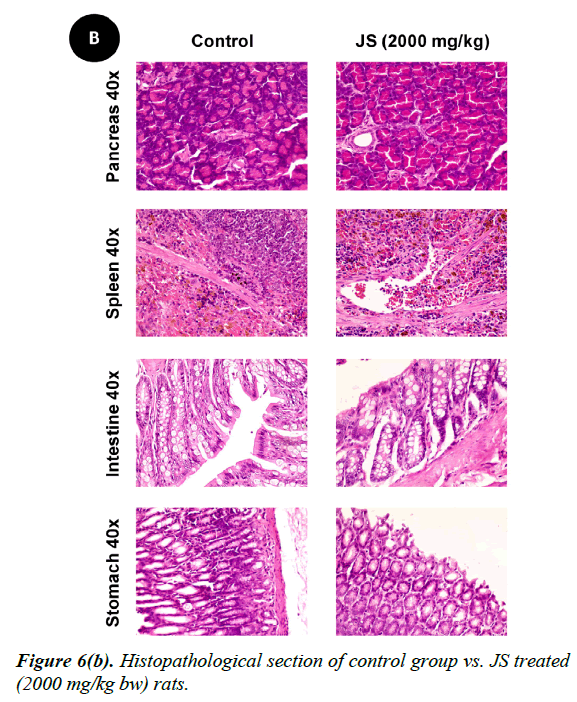 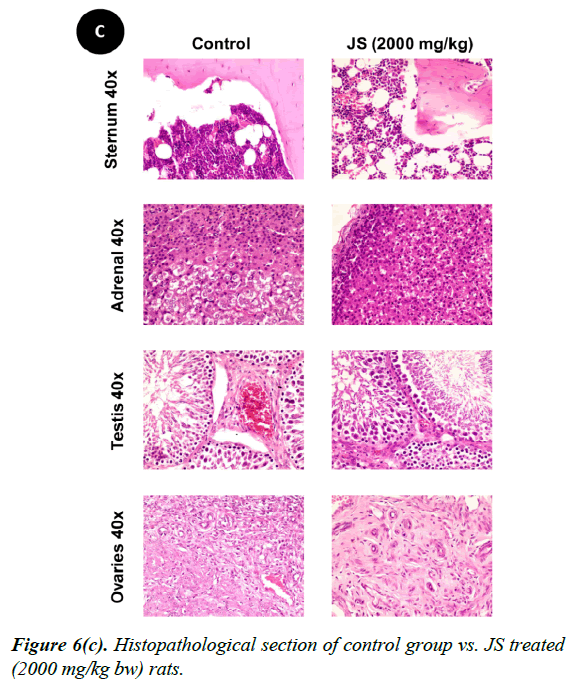 A chronic toxicity study was conducted on a polyherbal Unani formulation Jawarish Shahi in SD rats. Animals treated with JS did not showed any toxicologically significant changes with respect to behavioural signs of toxicity, body weight gain, feed intake, haematology parameters, biochemistry profile, gross necropsy and histopathology compared to control group. Based on the present findings, No Observed Adverse Effect Level (NOAEL) of JS in SD rats is >2000 mg/kg bw.

Support extended by Director General, CCRUM, Ministry of AYUSH, Government of India, New Delhi, in terms of financial resources and infrastructure is greatly acknowledged. Authors are thankful to National Institute of Nutrition for providing technical expertise for histopatholgical evaluation and laboratory services of CRIUM Hyderabad for providing support for biochemistry and haematology of blood samples.