The notion of acute coronary syndrome (ACS) first began in 1772, when William Heberden first described crescendo angina [1] Many decades later, in 1858 Rudolph Virchow proposed that injury to coronary endothelium is possibly due to fat, which might lead to inflammation and secondary plaque formation [2]. Centuries later, coronary artery disease (CAD) is still the global leading cause of mortality [3].

Traditionally, the perception of coronary artery disease is a disease of the elderly. The mean age of ACS was 66 in the expanded Global Registry of Acute Coronary Events (GRACE) [4]. Meanwhile, our Malaysian National Cardiovascular Disease (NCVD) registry demonstrated a younger mean age of 59 [5]. In the Northern part of Kuala Lumpur, the mean age of ACS presenting to Sungai Buloh Hospital was 56 [6]. The National Health and Morbidity Survey illustrated that cardiovascular disease is the leading cause of mortality in Malaysia, contributing to 25.4% of hospital mortalities in 2010 [7].

73% of total deaths in Malaysia are attributed to noncommunicable disease. Most of these deaths are from acute coronary syndrome and strokes. Approximately 35% of deaths occur in those below 60 years of age, which are mainly the working population. The national health and morbidity survey (NHMS) showed a high proportion of Malaysians with undiagnosed non-communicable disease (NCD) risk factors. This leads to late diagnosis, complications, costly in-hospital management and more mortality and morbidity.

This retrospective study was conducted at Sungai Buloh Hospital Malaysia, which is a non-cardiac catheterization centre. The trial was coordinated by the Cardiology Unit of the Medical Faculty of Universiti Teknologi MARA. Using ICD-10 classification, all patients who had unstable angina (UA), non-ST elevation myocardial infarction (NSTEMI) and ST-elevation myocardial infarction (STEMI) were identified. All ward admissions were seen by an attending physician. Relevant information were then extracted and statistically analysed. Mortality outcomes were ascertained from the National Death Registry of Malaysia. The study was approved by all appropriate national regulatory authorities and the ethics committee. All authors vouch for the accuracy and completeness of the data and the analyses. 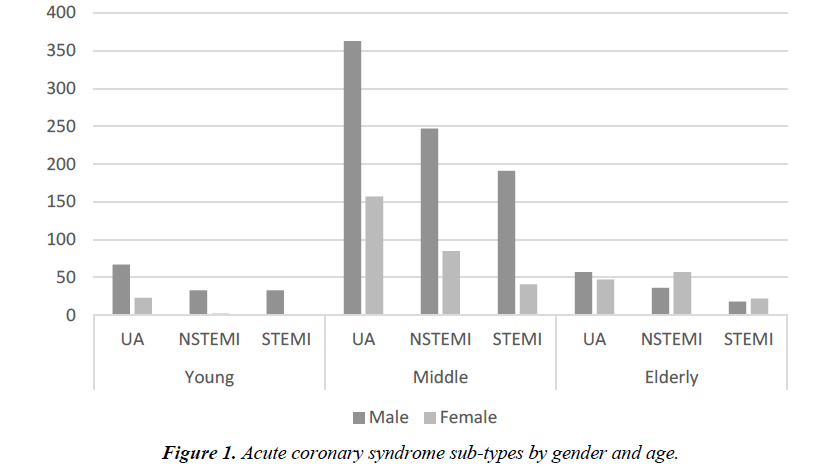 Looking at the differences in biochemical analysis of laboratory results, there is a notable trend among the three cohorts. Estimated glomerular filtration rate shows worsening renal function as age advances, with mean of 63.2 mL/min/1.73 m2 in the elderly, compared to 84.0 mL/ min/1.73 m2 in the young. Conversely, the younger cohort illustrates significant lower high-density lipoprotein (HDL) of 0.9 mmol/L (p=0.02), while having higher total cholesterol (TC) of 4.9 mmol/L (p=0.002) and triglyceride (TG) of 2.2 mmol/L (p=0.042). Additionally, peak cardiac enzymes were more elevated in the young (Table 1).

According to the multinational Global Registry of Acute Coronary Events (GRACE) registry which studied patients in 14 countries excluding Africa and Asia, large differences exist in management practice by hospital type and geographic location despite comparable use of antiplatelet and anticoagulants. Greatest survival at 6 months was associated with timely coronary artery bypass graft (CABG), percutaneous coronary intervention (PCI), use of clopidogrel and statins [10].

In the Malaysian NCVD-ACS registry, fibrinolysis use was relatively high (>70%) and use of invasive procedures were low (13-17%) compared to other registries. 30-day in-hospital mortality was higher amongst the Malay (7%) compared to other ethnic groups (4-6%) and rates from other Asian registries [11-14]. Geography, education towards chest pain awareness, lack of healthcare insurance and government medical infrastructures are several challenges in the local setting. Advantages from optimal acute and post-discharge treatment are supported by other registries, such as the SNAPSHOT ACS study and the Genesis Heart Care Group Registry (GHCGR). Both were able to illustrate the variability in resources and in-hospital major adverse cardiac event (MACE) rates across different healthcare jurisdictions [15,16].

Implementation of post-hospital coaching programmes, such as the coaching patients on achieving cardiovascular health (COACH) programme in Australia has been proven to be effective in improving both short-term and long-term outcomes [18]. Medical treatment cost is a major barrier to patients in most countries in the Asia-Pacific region. In Australia, clopidogrel administered in-hospital is reimbursed and subsidized postdischarge. Despite of that, adherence up to 12 months is only 60-70% [19,20]. In China, less than 40% of patients remain compliant to medications at 12 months post-discharge, mostly due to patient refusal [21]. Improvement of patient education is required regarding acute coronary syndrome, especially in reducing time-to-treatment and improving pharmacological adherence. Possible patient engagement is through community talks, dissemination of knowledge on various multimedia platforms and ultimate importance of prevention and health screenings.

Tobacco smoking prevalence in Malaysia is at 22.8% [22]. It was estimated that nearly five million Malaysians aged 15 years and above smoked. The prevalence of exposure to second-hand smoke at home was 37.1% [23,24]. Previous studied have demonstrated that tobacco smoking produces more atherosclerosis [25]. This is mainly attributed by changed in cholesterol levels, platelet aggregation and damage to endothelium [26]. Exposure to tobacco smoking increases risk of acute coronary syndrome by 25% for a non-smoker compared with the unexposed [27,28].

The paradigm shift of younger patients presenting with acute coronary syndrome is alarming. With the ever increasing burden of non-communicable disease, ACS related mortality and morbidity will only increase and present at a much earlier age. There are multiple barriers that require attention to further improve outcomes in our local setting.