Yisui shengxue granule, a traditional Chinese medicine compound preparation, can up-regulate the expression of GM-CSF and its receptor in mice bone marrow after irradiation

Materials and methods: Male Kun-Ming mice (n=52) were randomized into four groups (n=13): blank, model, positive drug, YSSXG. With the exception of blank group, all mice were irradiated with 60Co-γ rays (3.5 Gy). Two days prior to modeling, 3 g/kg YSSXG was administered intragastrically to mice in YSSXG group, while groups of blank, model and positive drug were administered with distilled water. The next day after modeling, mice in positive drug group were hypodermically injected with 30 μg/kg recombinant human granulocyte colony-stimulating factor; mice in the other groups received the same treatment as that prior to modeling, the duration of each course was 14 d. The contents of granulocytemacrophage colony stimulating factor (GM-CSF) in bone marrow supernatant and blood serum were assessed with radioimmunoassay. The mRNA expressions of GM-CSF and GM-CSF receptor alpha (GM-CSFRα) in bone marrow cells were analyzed by real-time fluorescent quantitative polymerase chain reaction. Protein expression of GM-CSF receptor beta (GM-CSFRβ) in bone marrow cell membranes was assayed via immunocytochemistry.

Discussion: The cell proliferation and differentiation of myeloid hematopoisis regulated by YSSXG were related to promoting the expressions of GM-CSF and GM-CSFR in bone marrow.

Yisui Shengxue Granule (YSSXG) is a traditional Chinese medicine compound preparation, which can be used to treat anemia [1]. Previous studies of this compound have focused on its curative effect on thalassemia and its molecular mechanisms [2-4].

These findings indicate that YSSXG may promote the proliferation and differentiation of myeloid hematopoietic cells.

Some studies have demonstrated that the interaction of Granulocyte-Macrophage Colony Stimulating Factor (GMCSF) and the GM-CSF receptor (GM-CSFR) is crucial for regulating the proliferation and differentiation of myeloid hematopoietic cells [9,10].

In order to explore the molecular mechanisms associated with YSSXG-induced regulation of myeloid hematopoietic cell proliferation and differentiation, this study examined the effects of YSSXG on the expression of GM-CSF and GMCSFR in BM from irradiated mice.

Fifty-two Kun-Ming, clean grade, male mice (weight, 18-22 g) were obtained from Beijing Huafukang Biotechnology Corporation (Certificate of quality No. SCXK (Beijing) 2009-0007). Mice were maintained in conditions of standard temperature, relative humidity, and light/day cycles, with free access to food and water. The experiment began after a 1-week acclimation period. Approval for this experiment was granted by the Experimental Animal Ethics Committee of the Capital Medical University.

In total, 52 mice were randomized into four groups (n=13): blank group, model group, positive drug group, YSSXG group. With the exception of mice in blank group, all mice received whole-body irradiation by 60Co-γ rays (60Co Tele-therapeutic Machine, produced by Nuclear Power Institute Equipment Manufactory, China), with an absorbed dose of 3.5 Gy, at an absorbed dose rate of 1.31 Gy/min. Two days prior to modeling, mice in YSSXG group were administered 3 g/kg YSSXG intragastrically [5-6,8]. Mice in groups of blank, model and positive drug were administered with distilled water (0.1 mL/10 g body weight). The next day after modeling, mice in positive drug group were hypodermically injected with 30 μg/kg (injection volume 10 mL/kg) recombinant human Granulocyte Colony-Stimulating Factor (G-CSF), while mice in the other groups received the same treatment as that prior to modeling; these courses continued for 14 consecutive days [5-8]. On 15th d after modeling, the mice were anesthesized with 10% chloral hydrate. When the mice were in the anesthetic stage, volume of 1mL blood was collected from the orbit. After blood collection, mice were sacrificed by pulling the vertebra.

Blood was placed at room temperature. After the blood coagulated, serum was separated at 2500 r/min for 10 min.

After the mice were sacrificed, two femurs were peeled off each mouse and both ends were excised to expose the BM cavity. A four-gauge sterile syringe needle was utilized to aspirate 2 mL phosphate buffer solution (0.1 M, PH 7.4) for repeated washing. BM cells were then collected into 15 mL centrifuge tubes, and centrifuged at 1000 r/min for 10 min to separate the supernatant.

The contents of GM-CSF in the BM supernatant and blood serum were recorded using an r-911 full automatic radioimmunoassay counter (University of Science and Technology of the China Industrial Company) according to the GM-CSF radioimmunoassay kit’s instructions.

The BM cell suspension was centrifuged at 2500 r/min for 10 min to discard the supernatant and the BM cells were collected in Eppendorf tubes. The mRNA expression of GM-CSF and GM-CSF receptor alpha (GM-CSFRα) in BM cells was analyzed by real-time polymerase chain reaction (PCR).

Total RNA extraction: In order to extract total RNA, 1 mL trizol reagent was added to the BM cells, according to manufacturer’s instructions. The concentration, purity, and integrity of total RNA was measured using a DU-600 ultraviolet spectrophotometer (Beckman, USA) and 1.2% agarose gel electrophoresis.

Single-stranded cDNA synthesis: Total RNA was reversetranscribed into cDNA using a Fermentas K1622 RT kit. Total RNA (1-5 μg) was dissolved in 2 × DEPC-treated water to 11 μL and 0.5 μg/μL oligo (dT), 18 primer 1 μL was then added. The sample was instantaneously centrifuged, heated at 65°C, and degenerated for 5 min. After a rapid cooling on ice, 5 × reaction buffer 4 μL, 20 u/μL RNA enzyme inhibitors 1 μL, 10 mM dNTPs mix 2 μL, and 200 u/μL M-MLV reverse transcriptase 1 μL were added to the sample; the total reaction volume was 20 μL. Reverse transcription was conducted at 42°C for 60 min, followed by the inactivation of the enzyme reverse transcriptase at 70°C for 10 min. The resulting cDNA was then used as a template for real-time PCR amplification immediately or was stored at -40°C for later use.

Primer design and synthesis: Glycer aldehyde phosphate dehydrogenase (GAPDH) was utilized as the reference gene. Gene sequences of GAPDH, GM-CSF, and GM-CSFRα were obtained from Gene Bank, and Primer Express 3.0 software (ABI, USA) was used to design their primers. The primers of GAPDH, GM-CSF, and GM-CSFRα were synthesised by Beijing Saibaisheng Gene Technology Co. Ltd. (Table 1).

Human serum, 5-10 μL, was added to a piece of glass slide and mixed with mice sternum, the BM of which was extruded using medical hemostatic forceps. A piece of cover glass was used to push the BM forward, slowly at a 45°C angle.

Smears were then dried naturally, and placed in an alcohol/ formaldehyde fixative solution (95% alcohol: 40% formaldehyde=9:1) for 1 min, and dried out. The protein expression of GM-CSF receptor beta (GM-CSFRβ) in BM cell membranes was assayed via immunocytochemistry.

The smears were then developed with DAB, counterstained with hematoxylin for 5 min, and washed with running water. The smears were differentiated using 1% hydrochloric acid alcohol (75%) for 30 s, washed with running water for 5 min, and then dehydrated through a grade alcohol series (5 min per grade). Following this, they were cleared with xylene for 15 min, repeated three times, and sealed with neutral gum. The mean density of positive protein in the smears was analyzed using Image-pro Plus 6.0 software (Media Cybernetics, USA).

Radioimmunoassay analysis showed that GM-CSF contents of BM supernatant and blood serum were significantly higher (for 138.4% and 125.5% respectively) in mice from the YSSXG group compared to the model group, the difference was statistically significant (P=0.036, P=0.002, respectively) and of sufficient statistical power (P=0.75, P=0.95, respectively) (Figure 1). 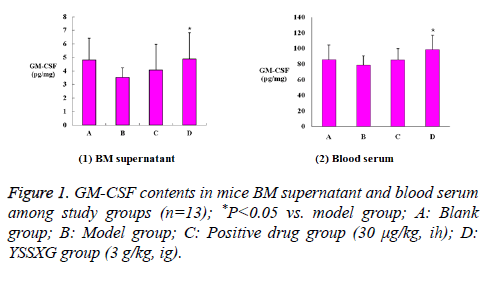 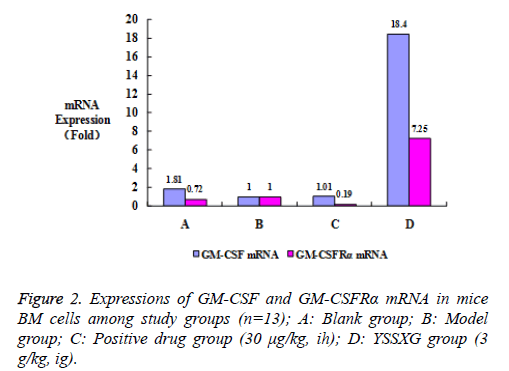 The positive expression of GM-CSFRβ protein was indicated by conspicuous light yellow to brownish-yellow granules under microscopic examination (X200 magnification, Figure 3). Mean density analysis revealed that GM-CSFRβ protein expression in BM cell membranes was substantially upregulated (P=0.042) in the YSSXG group compared to the model group. The statistical power is smaller than 0.8 (P=0.50). The low statistical power may be related to the small sample size (Figure 4). 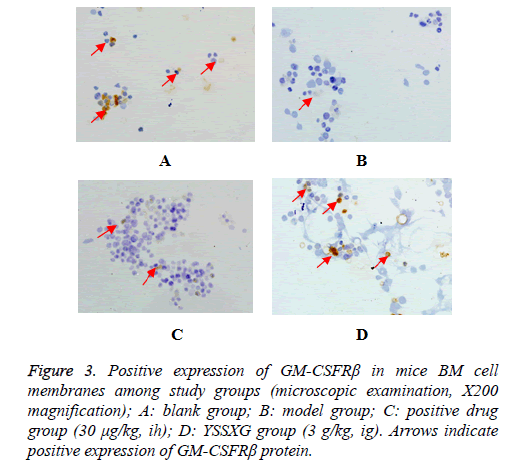 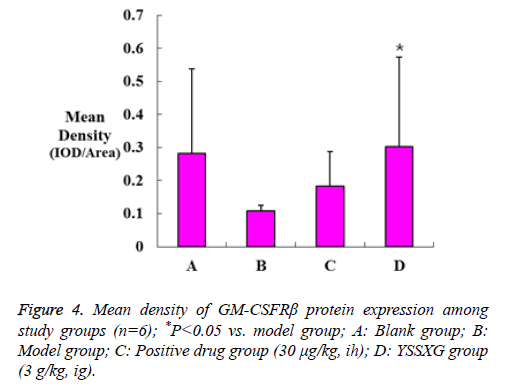 BM is very sensitive to Ionizing Radiation (IR), which not only causes acute myelosuppression, but also induces long-term BM injury [12]. IR-induced acute BM suppression is primarily responsible for the induction of apoptosis in HSCs and Hematopoietic Progenitor Cells (HPCs), and long-term IRinduced BM injury is mainly attributable to the induction of Hematopoietic Stem Cell (HSC) senescence [13]. In recent years, Hematopoietic Growth Factors (HGFs) have been used to improve acute BM suppression. HGFs can promote the recovery of BM hematopoietic function by stimulating the proliferation and differentiation of HPCs [14].

GM-CSF, a member of the HGF family, is produced by macrophages, T cells, mast cells, endothelial cells, fibroblasts, mesothelial cells, and epithelial cells, among others [9,15]. It has broad biological activities, such as the control of hematopoietic cell survival, stimulation of both the proliferation and differentiation of early hemopoietic progenitor cells, and the regulation of the function in mature cells including neutrophils, eosinophils, and macrophages [9,10]. This present study showed that, compared to the model group, the differences of GM-CSF contents in mice BM supernatant and blood serum in the YSSXG group have statistical significance, and GM-CSF mRNA expression in BM cells was up-regulated. This indicates that YSSXG can enhance the expression and secretion of GM-CSF in BM. But the relative quantitative method was used in real-time PCR data analysis in this paper, which method could not accurately quantify the gene expression level, so there will have some limitations.

GM-CSF exerts its biological effects by binding to the GMCSF receptor at the cell surface. GM-CSFR is a transmembrane receptor, which is widely expressed by a variety of cells, such as myeloid progenitor cells, monocytes, neutrophils, eosinophils, basophils, and dendritic cells [9,10]. It is composed of alpha and beta subunits. The alpha subunit is soluble and contains the recognition site for GM-CSF. However, it is unable to mediate signaling alone. The beta subunit exerts its principal effect on signal transduction, mediated by GM-CSF, but it is incapable of binding GM-CSF alone. Therefore, GM-CSF must initially bind to the alpha subunit with low affinity; the beta subunit is then able to bind to the alpha subunit, forming a high-affinity complex [16-19]. The results of this present study revealed that GM-CSFRα mRNA expression in mice BM cells and GM-CSFRβ protein expression in BM cell membranes were both substantially upregulated in the YSSXG group compared to the model group. This indicates that YSSXG can increase the expression of GMCSFR in BM.

After the binding of GM-CSF to GM-CSFR, some of the receptor-associated protein kinases are activated rapidly. This results in the activation of multiple signal transduction pathways, such as the Janus Kinases 2-signal transducers and activators of transcription 5 pathway, the ras-mitogenassociated protein kinase pathway, and the phosphoinositol 3- kinase pathway. Following this, stimulus signals are transmitted to nucleus, regulating relational gene transcription and controlling the proliferation and differentiation of hematopoietic cells [16-18,20]. The findings of this present study suggest that YSSXG may improve radiation-induced BM injury repair by up-regulating the expressions of GM-CSF and GM-CSFR. Whether YSSXG can effectively promote the binding of GM-CSF and GM-CSFR to transmit cell proliferation and differentiation signal still need further research.

The cell proliferation and differentiation of myeloid hematopoisis regulated by YSSXG were related to promoting the expressions of GM-CSF and GM-CSFR in BM. 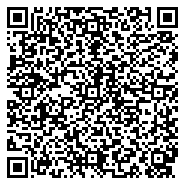