Aims: The present study aims to assess the effect of Xuefu Zhuyu Decoction (XFZYD) in promoting the proliferation, migration and adhesion of endothelial cells, and to investigate the preliminary mechanisms.

Results: The data showed that 1.25% XFZYD-CS had no effect on HUVECs activity; 2.5% XFZYD-CS promoted the proliferation, migration and adhesion of HUVECs; 5% XFZYD-CS enhanced the migration, adhesion and intracellular VEGF expression in HUVECs.

Conclusions: The present study demonstrates that XFZYD induces the proliferation, migration and adhesion of HUVECs through VEGF-VEGFR2 pathway, suggesting that the mechanism by which XFZYD stimulates angiogenesis in vivo may be these actions.

Angiogenesis, the formation of new blood vessels from a preexisting vascular network, occurs in either physiological or pathological conditions [1]. This process is closely regulated by a series of pro- and anti-angiogenic molecules in normal physiology. However, serious consequences may occur when this equilibrium is broken [2], and abnormal angiogenesis participates in tumor development [3]. Stimulation of angiogenesis can be used to accelerate wound healing and to promote the growth of collateral blood vessels in ischemic tissues [4]. Angiogenesis is stimulated by a large number of pro-angiogenic molecules, among which Vascular Endothelial Growth Factor (VEGF) is one of the most important factors in angiogenesis [5]. VEGF exerts its activity in angiogenesis through binding to transmembrane endothelial cells VEGFR2 [6-8]. Binding of VEGF to VEGFR2 leads to intracellular receptor phosphorylation that initiates various intracellular downstream pathways, causing endothelial cell proliferation, migration and adhesion [8-11].

Xuefu Zhuyu Decoction (XFZYD) mentioned in Yilin Gaicuo (Correction on Errors in Medical Classics) is a popular traditional Chinese medicine that is frequently used for the treatment of ischemic diseases. It has been known that XFZYD possesses biological activities that prevent platelet aggregation and arteriosclerosis. It has been reported that XFZYD promotes angiogenesis in Chorioallantoic Membrane (CAM) model [12], facilitates endothelial progenitor cell tube formation and mobilizes bone marrow-derived endothelial progenitor cells for angiogenesis in rats [13]. However, its cellular and molecular mechanisms are even unknown. It is already known that VEGF-VEGFR2 pathway induces the proliferation, migration and adhesion of endothelial cells. Here, we explore cellular and molecular mechanisms on the basis of previous reports [14,15]. In this study, we investigate the effects of XFZYD on endothelial cell proliferation, migration, adhesion, as well as the underlying mechanisms.

The XFZYD-containing serum was prepared as described previously [16]. Twelve 6-week old purebred Sprague-Dawley (SD) rats (Slac Laboratory Animal Co., Shanghai, China) were used in the present study. Half were males and half were females. All rats were in good health and each weighed 150 ± 20 g. The rats were maintained in certificated specific pathogen-free housing facility of the Experimental Animal Center of Ningxia Medical University. The temperature in the chamber was 22-24°C. All animals had 12 h light/dark cycle. All procedures were performed in accordance with institutional guidelines and conformed to the Guide for the Care and Use of Laboratory Animals as published by the National Institutes of Health (USA) and approved by the local Ethics Committee. Rats were randomly distributed into two groups. In the first group, each animal was orally administrated XFZYD at 13 g/kg twice a day for a total of seven doses. Blood was obtained from abdominal aorta 2 h after the last administration, and centrifuged at 4,000 rpm for 30 min. Serum was collected and termed as XFZYD-Containing Serum (XFZYD-CS). In second group, rats were orally administrated normal saline according to the same protocol, and the serum was used as Blank Serum (B-S). Both XFZYD-CS and B-S were inactivated by heating at 56°C for 30 min, filtered through 0.22 μm filter, and stored at -20°C until use.

Human umbilical vein endothelial cells (HUVECs) were obtained from China Center of Type Culture Collections, College of Life Sciences, Wuhan University, Wuhan, China, and grown in M199 medium (Thermo Fisher Scientific, Waltham, MA, USA) containing 5% fetal bovine serum at 37°C in an atmosphere with 5% CO2 as described previously [17]. When reaching confluence, HUVECs were detached using trypsin-EDTA solution. HUVECs were rendered synchronized by incubation for 24 h in serum-free M199 medium. Synchronized HUVECs were harvested and plated in 96-well plates for proliferation assay or 25 cm2 flasks for further assays at a density of 2.5 × 103 cells/well or 2.5 × 105 cells/flask in M199 medium supplemented with 5% fetal bovine serum. After 4 h, the medium was discarded. The cells were exposed to XFZYD-CS or B-S at final concentrations of 1.25%, 2.5% and 5% (w/w) for 48 h.

The effect of XFZYD-CS on HUVECs proliferation was estimated by MTT assay as described previously [17]. MTT (5 mg/ml; Amresco Co., Solon, OH, USA) was added to each well for incubation for 4 h. After MTT solution was replaced by 200 μl DMSO, the plates were shaken for 10 min. The optical density (OD) was assessed at 570 nm (reference wave, 630 nm) using a 96-well microplate reader (SynergyH1, BioTek, Winooski, VT, USA).

The migration of HUVECs was evaluated using Boyden chamber assay as described previously [18]. Boyden chamber (Haimen City Qilin Medical Instrument Factory, Jiangsu, China) was inserted with polycarbonate membrane. HUVECs treated with XFZYD-CS or B-S (2 × 104 cells) were suspended in 100 μl of corresponding culture medium and added to the upper chamber. The lower chamber was loaded with 100 μl corresponding cell culture supernatant. After incubation at 37°C for 1 h, residual cells in the upper side of the membrane were screwed with cotton swabs. Then, the membrane was fixed with 4% neutral formalin for 10 min. Cells that migrated to the lower side of the membrane were stained with haematoxylin. The stained cells were counted in 6 High Power (X400) Fields (HPF). Photographs were taken by an inverted phase contrast microscope (IX70, Olympus Co., Tokyo, Japan).

qRT-PCR was performed as previously described [20]. Total RNA was obtained from HUVECs treated with XFZYD-CS or B-S using Trizol reagent, and the amount and purity of RNA were determined by spectrophotometry. Total RNA (1 μm) was reverse transcribed using Revertaid First Strand cDNA Synthesis Kit (Fermentas, Thermo Fisher Scientific, Waltham, MA, USA) according to the manufacturer’s protocols and the resultant cDNA was amplified by PCR. Primers for VEGF were: 5’-TGG ATC CAT GAA CTT TCT GCT GTC-3’ (sense) and 5’-TCA CCG CCT TGG CTT GTC ACA T-3’ (antisense) (product size 452 bp); primers for VEGFR2 were 5’- GCACGATTCCGTCAAGGG-3’ (sense) and 5’- TTCAAAGGGAGGCGAGCA-3’ (antisense) (product size 383 bp); primers for β-actin were 5’-ATC ATG TTT GGG ACC TTC AAC A-3’ (sense) and 5’-CAT CTC TTG CTC GAA GTC CA-3’ (antisense) (product size 318 bp). PCR was performed in a thermal cycler (Perkin-Elmer, USA) under the following conditions: an initial denaturation at 94°C for 3 min, 35 cycles of denaturation at 94°C for 30 s, annealing at 58°C for 30 s, and extension at 72°C for 45 s, followed by a final extension for 10 min. PCR products were analyzed with electrophoresis in TBE buffer stained with DNA green (Bioteke Biotech Co., Beijing, China) at 5V/cm for 40 min in 2.0% agarose gel. The level of gene expression was assessed by densitometric measurement of the amount of PCR products on scanned agarose gels (Genetech Co., Shanghai, China). The units of expression were calculated as the ratio of the amount of PCR product of studied mRNA to the amount of PCR product of the housekeeping gene β-actin, the amount of which was assumed to be expressed constantly in cells. 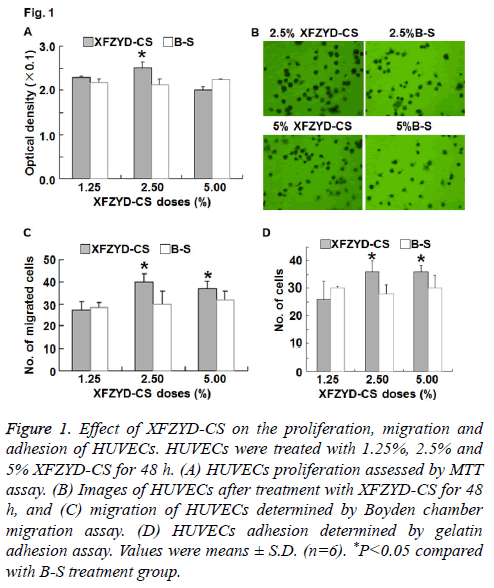 Figure 1: Effect of XFZYD-CS on the proliferation, migration and adhesion of HUVECs. HUVECs were treated with 1.25%, 2.5% and 5% XFZYD-CS for 48 h. (A) HUVECs proliferation assessed by MTT assay. (B) Images of HUVECs after treatment with XFZYD-CS for 48 h, and (C) migration of HUVECs determined by Boyden chamber migration assay. (D) HUVECs adhesion determined by gelatin adhesion assay. Values were means ± S.D. (n=6). *P<0.05 compared with B-S treatment group.

XFZYD facilitates the migration of HUVECs

XFZYD enhances the adhesion of HUVECs 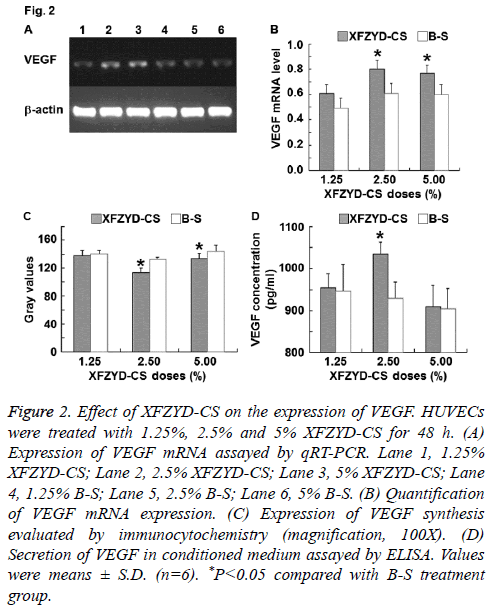 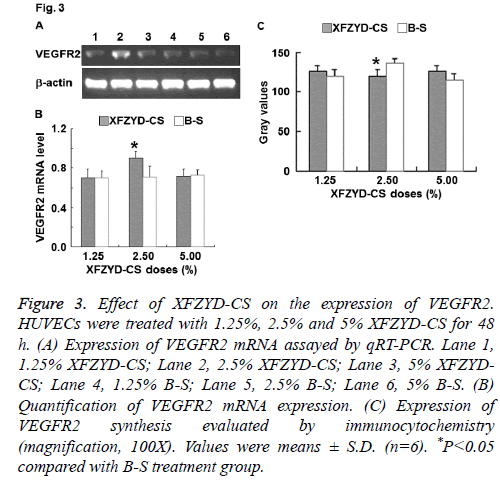 XFZYD has been successfully used for the treatment of ischemia diseases by stimulating angiogenesis [12,13]. However, the cellular and molecular mechanisms underlying these pro-angiogenic effects are unclear. In the present study, we have demonstrated that XFZYD facilitates HUVECs proliferation, migration and adhesion via VEGF-VEGFR2 pathway.

Angiogenesis, the formation of new capillary blood vessels, plays an important role in the development of ischemic diseases [21]. Endothelial cells proliferation, migration and adhesion are key steps in angiogenesis [22]. Here, we have investigated the effects of XFZYD on these activities using MTT assay, Boyden chamber migration assay and gelatin adhesion assay, respectively. The results have shown that 1.25% XFZYD-CS has no effect on these activities, 2.5% XFZYD-CS promotes all these activities, while 5% XFZYDCS only enhances the migration and adhesion of HUVECs. These data suggest that XFZYD induces the proliferation, migration and adhesion of endothelial cells for angiogenesis. It speculated that XFZYD does not non-selectively stimulate angiogenesis, but may primarily maintain vessel growth under physiological or repairing conditions, and have a different activity in atheromatous plaque [14].

Numerous molecules have been reported to take part in the process of angiogenesis. Of note, VEGF-VEGFR2 pathway plays important roles in the proliferation, migration and adhesion of HUVECs. In the present study, 1.25% XFZYD-CS has no effect on VEGF and VEGFR2 expression, 2.5% XFZYD-CS increases the expression of VEGF and VEGFR2, and 5% XFZYD-CS only stimulates intracellular VEGF expression. These results suggest that 2.5% XFZYD-CS induces the proliferation, migration and adhesion of HUVECs by stimulating intracellular VEGF expression and VEGF secretion, and promoting VEGF binding to VEGFR2. In addition, 5% XFZYD-CS enhances migration and adhesion of HUVECs by inducing intracellular VEGF expression. However, 5% XFZYD-CS fails to induce HUVECs proliferation, suggesting that 5% XFZYD-CS does not promote the secretion of VEGF or the expression of VEGFR2. The mechanism to promote angiogenesis is very complexed. It not only includes up-regulating all relevant angiogenic factors, but also includes down-regulating all the relevant inhibitory factors. This phenomenon is also manifested in chemokine superfamily, in which different members have different effects on angiogenesis.

It is reported that XFZYD-CS induces ECV304 cell angiogenesis by causing significant cellular changes at 48 h and genetic changes at as early as 24 h according to microarray analysis [23]. In addition, TGFβ2 and VEGFC are upregulated, CXCL6, CXCL10, CDH5 and EGF are downregulated, and VEGF-VEGFR2 is not altered [23]. This may be due to the difference between cell lines.

Angiogenesis is regulated by a series of pro- and antiangiogenic molecules. The results suggest that XFZYD promotes proliferation, migration and adhesion of endothelial cells by up-regulating VEGF-VEGFR2 pathway. However, it remains to be further investigated whether this pathway is the sole pathway that modulates XFZYD-induced endothelial cell proliferation, migration and adhesion. In conclusion, the present study demonstrates that XFZYD induces the proliferation, migration and adhesion of HUVECs through upregulating VEGF-VEGFR2 pathway. The intriguing findings in vivo provide cellular and molecular basis for understanding the mechanisms of XFZYD in the treatment of ischemic disease. The study also provides a basis for further researches on angiogenesis mechanism.

This work was supported by the Jingzhou Central Hospital of Cardiology, The Second Clinical Medical College, Yangtze University.