What is behind a violent child? Is it a mere accident or a bitter harvest?

Violence represents a great challenge especially to those who are concerned with children’s and adolescents’ behavior. Violent behavior can be encountered in children as young as preschoolers. At any age, violent behavior is an alarming sign that must be taken seriously and dealt with properly, as early as possible, to avoid unwanted and sometimes catastrophic consequences. Collaborative works must be directed to significantly reduce the exposure of children to violence whether at home, school, neighborhood, and or in media to cut the vicious circuit of violence short. Children in any community represent its future; hence, it is wise to integrate sincere efforts to ensure that such future will be healthy, bright, and promising. We must do our best to give our children the chance to see and live in a better world where “goodness, fairness, kindness, and beauty” are prevailing and being rewarded.

Violence is there everywhere; at homes, schools, and neighborhoods. It is widespread in many countries across the globe and we are obliged to follow, wherever we are, either directly or through different types of media. It represents a great challenge especially to those who are concerned with children’s and adolescents’ behavior including parents, school teachers, social workers, pediatricians, child psychologists and psychiatrists, public health professionals and politicians.

Violent behavior can be encountered in children as young as preschoolers but unfortunately it is usually considered by adults as a transient phase through which kids are passing. Such consideration is very risky as violent behavior of children at any age is an alarming sign that must be taken seriously and dealt with properly, as early as possible, to avoid unwanted and sometimes catastrophic consequences [1].

What is meant by Violence?

WHO defines violence as “the intentional use of physical force or power, threatened or actual, against oneself, another person, a group, or a community that either results in or has a high likelihood of resulting in injury, death, psychological harm, maladaptive development, and or deprivation” [2]. It is worthy to mention that violence is better looked at in a wider perspective that includes intentional as well as accidental use of any type of force; physical power, verbal aggression, and or emotional abuse.

What are the Different Possible Roles of a Child in the Vicious Circuit of Violence?

Violence represents a vicious circuit in which “violence usually leads to violence”. Within such a terrifying vicious circuit, the child could be a witness (watching violence at home, school, and neighborhood and all over the world via media), a victim (a target of violence as in cases of child abuse, bullying, homicide, terrorism, etc..) and or a perpetrator (committing violent acts by himself); Figure 1. As a perpetrator, a child or an adolescent may show outrageous temper tantrums, verbal and or physical aggression, frequent fighting, hurting animals or others (threats or actual attempts), fire setting, and or intentional violation of properties [1].

What is Behind a Violent Child?

Is violence a mere accident or a bitter harvest? This is the critical question that must be thoroughly explored in discussing the disturbing issue of violence especially in children. Our behavior and psychological development, whether normal or aberrant, are the outcome of the interplay between hereditary (nature) and environment (nurture) and epigenetics is the phenomenon that explains how the genes interact with the surrounding environmental factors (whether biological or psychosocial) to produce certain phenotype [3]. It involves changes in gene expression without alteration in gene sequence via mechanisms like DNA methylation and histone modification [4]. 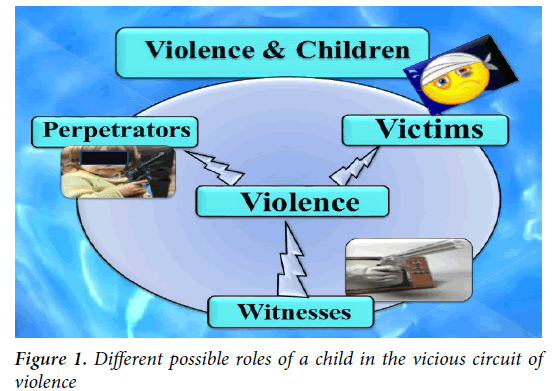 Figure 1. Different possible roles of a child in the vicious circuit of violence.

Any child, who is the conception product of the genetic make-up of his both parents’ (hereditary), lives in interlacing and intersecting social circuits (environment) [3,5]; first his home in which he is in direct contact with his parents, sibs, and other household adults, then his school in which he is greatly influenced by school administration, teachers, workers, and peers, his neighborhood in which he is interacting with adults and counterparts living nearby and lastly, via media, he is affected by the behaviors, attitudes, beliefs, concepts, values and traditions of people living anywhere across the globe (Figure 2).

Accordingly, there are many factors that increase the risk for the development of violent behavior among children and adolescents. Such factors include genetic susceptibility, previous incidents of aggressive behavior, being a victim of child abuse or bullying, drug and or alcohol abuse, availability of firearms in home, stressful family socioeconomic factors (as poverty, severe deprivation, marital discord or breakup, single parenting and parental unemployment), brain damage (e.g. hypoxic or traumatic) and watching violence via different types of media [1]. 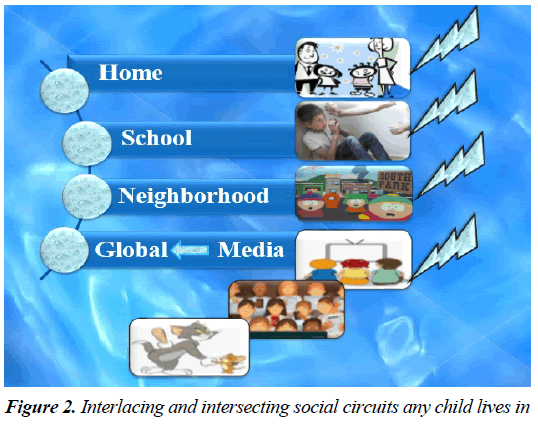 Unfortunately, entertainment nowadays is nothing but propaganda for violence. Manufacturer of guns do not need to advertise as it is done freely all the time by the entertainment industry all over the world as well as the news [6,7]. What do we expect from a toddler that will be left by busy parents in front of different types of screens for long hours daily throughout all his developmental stages until he grows up to be an adolescent and then an adult? What a question that really needs an honest answer from all of us!

To figure out how an innocent human being like a child turns to be a violent creature; it may be useful to define stressors and get familiar with some theories which were proposed to explain the development of a violent behavior including social learning theory, subculture of violence theory, and brain wash (mind control).

What is meant by Life Stressors and Stressful Situations?

A stressful event is any event which represents a threat to our lives and or our health. It involves the actual loss or the threat of a loss of someone or something precious to us and or to our existence, sense of identity and self-respect. In short, stressors are there whenever an individual feels that the demands of a life situation exceed his ability to cope with. Consequently, experiencing violence or being threatened with, represents an extremely stressful and traumatizing life event [8]. Children and adolescents in particular are at a greater susceptibility for the damaging psychological consequences when exposed to violence as they do not usually have the necessary soothing skills in order to tolerate stress [9]. Nevertheless, it is worthy to mention that not all those who are exposed to violence will suffer from its long standing psychological damage for some reason or another [8].

Children learn by observation and modeling. They tend to imitate what they hear, see and or experience. So, when a child is a witness or a victim of violence, it is very likely that he will behave in a violent way especially if the violent figures in his fore-mentioned social circuits (Figure 2) are not paying consequences for their violent behavior or even worse being rewarded. Direct social learning of violence occurs via instructions (as when a mother tells her child to beat back any child who beats him) while indirect social learning occurs by observing role models as in cases of children raised by violent families and or living in a violent neighborhood where violent figures are powerful and get benefits from their unaccepted dangerous behavior [10-12].

Although social learning theory could explain what is behind a violent child in many situations, it ignores the impact of many factors other than social on the development of violence including structural factors (as poor economic status), biological factors (as male gender), individual variations (as intelligence and personality), and increased susceptibility for the development of violent behavior in cases of organic brain damage (as in victims of physical child abuse) [11,13].

Commitment to subcultural norms and values in some groups can lead to violence when these norms and values play a significant role in social control over subculture group members. In such cases, violence may be a means to defend honor and keep respectful and powerful status (social hierarchies) [11,14,15]. Also, subcultural of violence theory is one of the explanations of school bullying phenomenon where abusive bullies are considered cool and popular [16].

Lower socioeconomic standards and masculinity were linked to subculture of violence although this is not always true. Masculinity is linked to anger, violent, aggressive, and dominating behavior as well as competitiveness because testosterone plays a significant role in the arousal of such behaviors in the related brain centers [17].

Brain washing or mind control is a controversial scientific theory that is used by some psychologists to explain the conversions to some new violent radical religious movements but it was rejected by others [18,19]. It entails the introduction of a radical change in thoughts, ideas, and beliefs of an individual by exerting significant forms of pressures as isolation for long periods, deprivation of biological needs (as food, drinks, sleep, and safety), extreme discomfort, pain, and inconsistent style of dealing (alternating kindness and cruelty) [20].

Thought reform and reprogramming (mind control) can also be achieved remotely and unfortunately in a very effective and smooth manner via the use of ads and mass media aiming at modifying or distorting the affect, behavior, perception, cognition, and motivation of a person or groups of individuals across the globe towards certain products, concepts, and or attitudes. It uses different ways of persuasion like “reciprocity, commitment, consistency, social proof, authority, liking, and scarcity” [21].

What Can We Do?

Children who are experiencing any of the discussed risk factors for the development of violent behavior must be referred for careful evaluation by mental health professionals. Such evaluation entails detailed interviews with the child, parents, sibs, teachers, and any other individuals with a direct influence on the child’s behavior. Questionnaires and other instruments are used to gather information about the child’s development and behavior. Documented violent children should be referred to specialized behavior and cognitive therapy aiming at training the child to develop coping mechanisms to tolerate stressful situations [22].

The child, with successful psychological intervention, is expected to learn how to control his anger, express his frustration in an accepted way, take responsibility for his actions, and accept consequences [1]. Any detected family conflicts and or school problems must be adequately addressed. On the other hand, if there are any local community or global issues that are disturbing for the child as wars or terrorism, they should be discussed honestly with the child in a way that he can understand. Parents are always advised to be there for their children, listen to them, encourage them to express their fears, feelings, and insecurities, and try to be as honest as they can in dealing with them and never promise their children what they cannot fulfill [23].

A Message to Take and Never to Forget!

Collaborative works must be directed to significantly reduce the exposure of children to violence whether at home, school, neighborhood, and or in media to cut the vicious circuit of violence short. Children in any community represent its future; hence, it is wise to integrate sincere efforts to ensure that such future will be healthy, bright, and promising. We must do our best to give our children the chance to see and live in a better world where goodness, fairness, kindness, and beauty are prevailing and being rewarded.