Our new method, presented here for the first time, demonstrates the possibility of storing a human periodontal ligament (PDL) in a frozen state over a period of 3 days with the perio-dontal membrane remaining viable, enabling the thawed tooth to heal with a normal perio-dontal ligament. The final temperature, incubation at -5 oC and the intensity of the magnetic field for the freezer were examined. Cells were cryopreserved for 3 days at -150 oC and the number of survived cells were counted by trypan blue stain solution. When -30 oC was used as the prefreezing temperature, the number of survived cells was over 90%. The intensity of the electric current required to generate a magnetic field was 75mA. From the results, pre-serving not only PDL cells but also valuable cells in high order is possible.

Autotransplantation is a common procedure for the treat-ment of a missing extracted tooth socket. It is reliable and has a good outcome for the donor tooth [1] in recent years, transplanted teeth have not been available as donor teeth have already been extracted from most patients. To solve such problems, teeth cryopreservation systems have been developed. There are many clinical reports and animal examinations of tooth cryopresevation with good results obtained [2-4]; however, there is a possibility that side effects such as tooth to bone ankylosis and then root re-sorption may by induced by the auto-transplantation proc-ess, although it is possible that these side effects may be induced by the autotransplantation process [5].

The most serious problem during freezing is cell damage induced by ice crystal formation inside the cells as well as mechanical stresses by extracellular ice formation. To prevent cell damage, there are two approaches to achieve cryopreservation of cells. Vitrification, which freezes cells quickly before ice crystals can form, is an efficient approach used to cryopreserve oocytes and embryos. [6-7] Among the different properties of cryoprotectants, the permeating property is very important because intracellu-lar ice formation is dangerous [8]. When a cell is placed into a hypertonic solution containing a cryoprotectant, it shrinks rapidly in response to the high extracellular osmolality, as diffusion of intracellular water out of the cell is faster than permeation of the cryoprotectant into the cell. After shrinking, the cell starts to regain its volume slowly as the cryoprotectant permeates the cell with water at a fixed osmolality. Thus, permeation of the cell with a cryoprotectant is critical for successful cell cryopreserva-tion [9]. However, vitrification requires a very high con-centration of cryoprotectants that is usually toxic to most cells [10].

Cryopreservation technology has progressed in the food industry in order to maintain food freshness. In this study, we collaborated with ABI Corporation Ltd (Chiba Japan), a manufacturing company of freezers for food preserva-tion. This freezing system is the Cell Alive System (CAS). Under the condition of CAS magnetic field energy, water clusters do not accumulate but remain in smaller groups, thus minimizing restraining the expansion of the water.

We examined the prefreezing temperature for PDL cells, an incubation at -5 °C and the intensity of the magnetic field for the freezer.

Human PDL cells were isolated from human first premo-lars extracted during orthodontic treatment according to a previous reports. The cells were cultured in α-MEM containing 10% FCS, 32 U/ml penicillin G, 250μg/ml ampho-tericin B and 60μg/ml kanamycin at 37 in a humidified atmosphere of 5% CO2.

The 105 cells were put into tube with 1ml preservation media BAMBANKER 2, Lymphotec, Tokyo, Japan). In order to find a suitable condition for freezing PDL cells using a magnetic field freezer, the following factors were examined:

Immediately after placing in flowing tap water at 18-22 °C, the cells were stained by 0.5% trypan blue to assess dead cells.

Viability of the cells

The defrosted cells were cultured in α-MEM containing 10% FCS for 48 h, and the number of proliferating cells was counted. Non-frozen cells were used as control data. 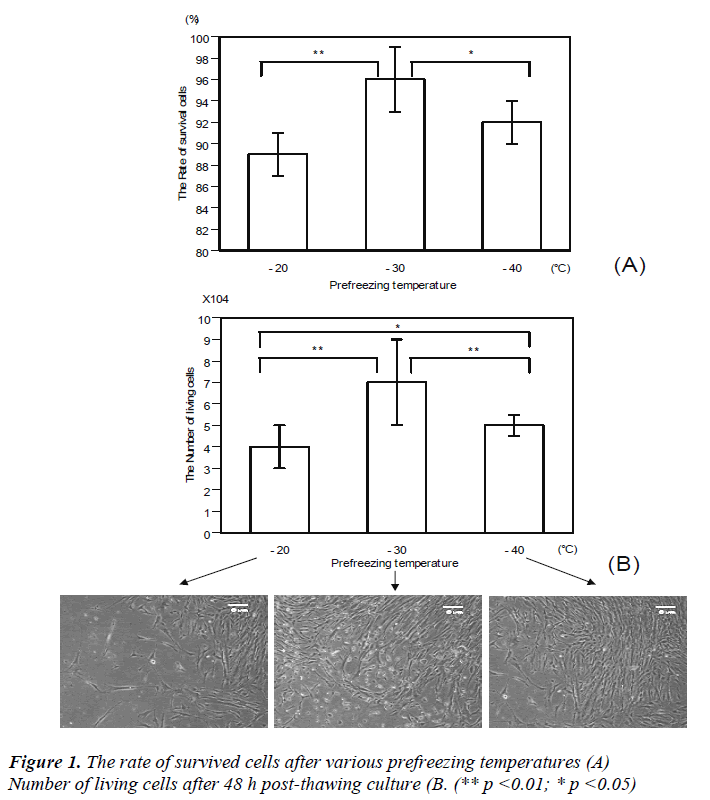 During freezing, various intensities of magnetic fields were examined. Over 90% of cells survived after cryopre-servation with 5, 75 and 150 mA of electric current to generate a magnetic field. The highest number of survival cells after thawing was found in the 75 mA group. There was a significant difference between the 75 and 150 mA groups in the survival rate (75mA vs 150mA=* p<0.05) (Figure 2A). No significant differences were observed in the number of living cells between these groups after 48 h (Figure 2B). 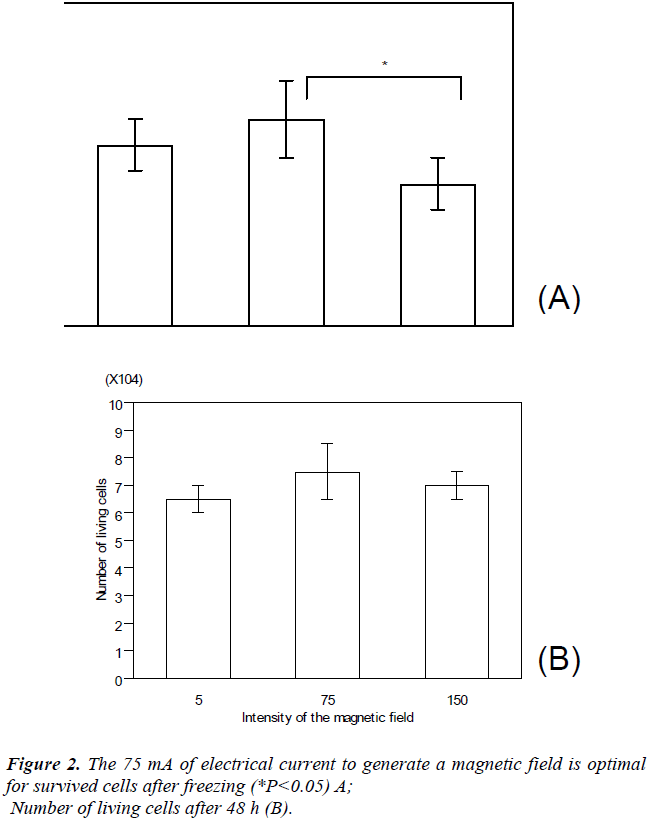 Figure 2: The 75 mA of electrical current to generate a magnetic field is optimal for survived cells after freezing (*P<0.05) A; Number of living cells after 48 h (B).

The cryopreserved tooth by a CAS freezer, the start of proliferation of PDL cells was observed after around 48 h.

Then, the cells of only -30℃ became confluent around by 40 days. However, cells were appeared in the cryopre-served tooth with all the magnetic field.

There are many storage facilities for living tissues and organs such as blood banks, kidney banks, bone marrow banks and so on, which have recently provided successful clinical outcomes. For freezing human embryo cells, slow freezing in a freezer is more efficient than rapid freezing by direct plunging into liquid nitrogen [12]. Freezing ma-ture teeth and tooth germs to sub-zero temperatures without cryoprotection or controlled temperature rates is known to cause necrosis, exfoliation, epithelial down-growth or ankylosis in replanted or autotransplanted teeth [2]; thus, it is preferable to use a freezer to prevent cell death.

In this study, we used a freezer with CAS. During normal freezing, cells were damaged by the intracelluar formation of ice crystals [13]. CAS uses a magnetic field, and slight magnetic field energy can regularly vibrate water mole-cules in cells, to produce uniform ice crystals [14-15]. When the materials are defrosted, the original cell shape is retained.

The results of our study demonstrated that for PDL cells, the desirable prefreezing temperature is -30 °C, the incu-bation period is 15 minutes at -5 °C and magnetic field intensity is 75 mA. The survival rate of cryopreserved cells after immediate thawing reached 90%.

Successful outcome of tooth transplantation is achieved by normal periodontal tissue healing with no progressive root resorption. The success rate of transplantation is in-fluenced by various factors such as PDL condition, surgi-cal technique, skill of physician performing the root canal treatment, and the prevention of infection. We believe that autotransplantation should be the first choice if the patient has a healthy donor tooth because it has many advantages compared with other treatments. However, sometimes patients do not have a suitable donor tooth because it has already been extracted. Thus, an establishment of a tooth bank is needed to expand the use of autotransplantation. Unnecessary wisdom teeth and healthy premolars which are extracted caused by orthodontic treatment will be the target and we plan to start a tooth bank and contribute to making autotransplantation the standard procedure for replacing a missing tooth in the future.

We would like to give our sincere thanks to Dr. T. Oka-moto, Dr. H. Kamata, Dr. H. Kurihara and Dr. K. Tani-moto for their valuable help.