Knee Osteoarthritis (KOA) is a degenerative disease characterized by knee cartilage degradation, reactive sclerosis and hyperplasia of the subchondral bone. Clinically, symptoms of KOA include joint pain, stiffness, swelling and limitation of joint motion. Severe KOA may cause joint deformity and even loss of joint function. Traditionally, KOA is treated with nonsteroidal anti-inflammatory drugs. Dorsal Root Ganglion (DRG) is a primary sensory neuron. On the basis that skin is innervated by spinal nerves L2-4, it was speculated that DRG of spinal nerves L2-4 were associated with pathogenesis of KOA. Studies have confirmed that acupuncture may exert analgesic effects on KOA in clinical practice, but the specific mechanism is still poorly understood. This study was undertaken to investigate potential mechanism underlying analgesic effects of acupuncture on rats with early KOA.

Knee osteoarthritis belongs to the category of “heumatism” of “polioplus” in traditional Chinese medicine. The etiology and pathogenesis of polioplus is descripted in Neijing, indicating that the basic of the disease is liver and kidney deficiency, and its reality is that wind, cold, and wet occurs together. Therefore therapy about reversing the insufficiency and decreasing the wind, cold, and wet showed good curative effect [1].

This study has been approved by the Ethic Committee of The Sixth People’s Hospital, School of Medicine, Shanghai Jiaotong University (2014-10-2J). And international guidelines for animal welfare were followed. A total of 40 male SD rats (specific pathogen free) weighing 250 ± 50 g and aging 3 months were randomly divided into control group, KOA group, WA group and PT group (n=10 per group).

Establishment of KOA model in rats

The KOA model was established by intra-articular injection of 1.6% papain into bilateral knee joint cavities according to a previously report [9] at three time points (1, 4 and 7 days, 0.1 ml per joint). On the basis that super fatigue may cause KOA, rats were allowed to run on a roller for 30 min daily for 2 weeks. Then, stable KOA was observed in rats.

Different treatments were administered in 4 groups: 1) control group: rats were intragastrically injected with normal saline as equal volume as in PT group and fixed on a table without other treatments. 2) KOA group: rats were fixed on a table, but did not receive any treatment; 3) WA group: warming acupuncture was done at bilateral anterior knee acupoints. Localization of anterior knee acupoint was anterior knee of hind limb. Acupuncture of anterior knee acupoint was able to exert analgesic effects and regulate hind limb functions. 4) PT group: meloxicam (7.5 mg/tablet; Shanghai Boehringer Ingelheim Pharmaceutical Co., Ltd. H20020217) was grounded and dissolved in normal saline into a 0.5 mg/ml solution. Rats were intragastrically injected with 3.75 mg/kg meloxicam once a day and also fixed as in WA group. After treatment for 20 days, rats were sacrificed, serum and DRG were collected, and ELISA was performed to detect PGE2 with rat PGE2 ELISA kit (RD company). The whole-cell patch-clamp technique was employed for detection of TTX-R sodium channel current.

Detection of serum PGE2 by ELISA

SPSS version 18.0 was employed for statistical analysis, and data were expressed as means ± standard deviation (x̄ ± s). Comparisons of means among groups were done with Student- Newman-Keuls or least significant difference t. A value of P<0.05 was considered statistically significant.

Comparisons of serum PGE2 in rats

Rats were intraperitoneally anesthetized with 5 mg/ml at 4 mg/100 g body weight, and blood (5-10 ml) was collected into a centrifuge tube, followed by centrifugation at 3000 r/min for 3 min. Serum was harvested for detection of PGE2. Results of normality test and homogeneity of variance test showed that data displayed nearly normal distribution and had homogeneity of variance. Thus, t-test was employed. Results showed that peripheral serum PGE2 was significantly different among groups (P<0.01). Compared to KOA group, serum PGE2 reduced significantly in the other groups (P<0.01), but there was no significant difference between Warming Acupuncture (WA) group and Pharmacotherapy (PT) group (P>0.05). In addition, significant difference in serum PGE2 was also observed between WA group and control group (P<0.01). 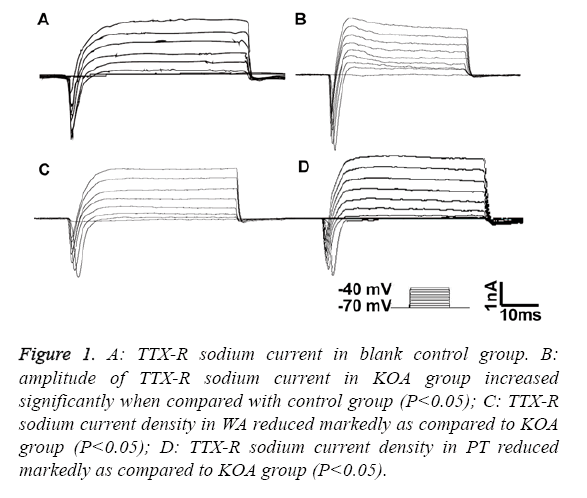 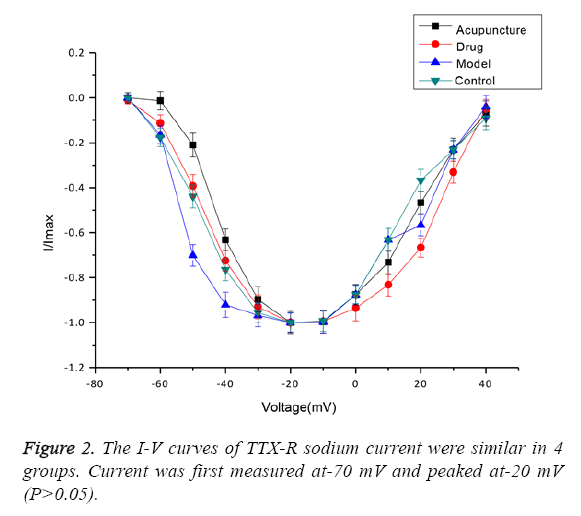 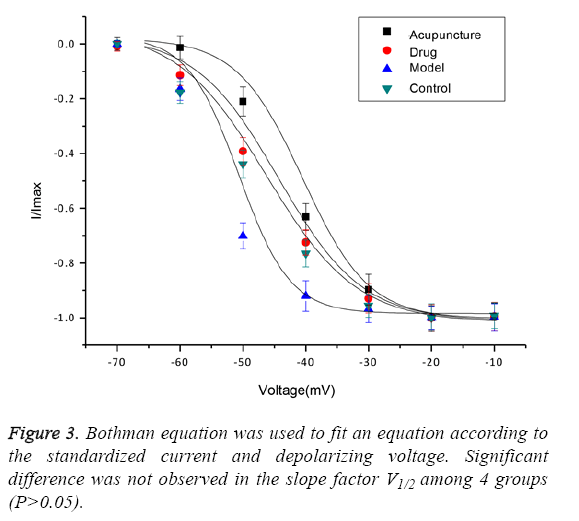 Figure 3: Bothman equation was used to fit an equation according to the standardized current and depolarizing voltage. Significant difference was not observed in the slope factor V1/2 among 4 groups (P>0.05).

Prostaglandins are metabolites produced by arachidonic acid cyclooxygenase and their production undergoes a series of enzyme-mediated catalyses. PGE2 acts via activating a group of G protein-coupled receptors including EP1, EP2, EP3 and EP4 [10]. PGE2 has been found to play an important role in acute inflammation and may act on peripheral circulation system to induce congestion and oedema. In EP knockout mice, results showed prostaglandins including PGE2 may exert both pro-inflammatory and anti-inflammatory effects, which are dependent on the regulation of corresponding genes [11]. PGE2 may not only promote osteogenesis, but stimulate bone absorption. PGE2 at a low concentration induces osteogenesis, but PGE2 at a high concentration may cause bone absorption [12]. After warming acupuncture in rats with KOA, ELISA was performed to detect nitric oxide (NO) and PGE2 in knee synovial fluid and serum, and results showed that NO and PGE2 increased significantly in rats with KOA when compared with control rats; and warming acupuncture could reduce elevated NO and PGE2 in the knee synovial fluid and serum when compared to untreated KOA rats. This suggested that the increase of PGE2 was closely related to pathogenesis of KOA and might be an important participant in pathogenesis and pathology of KOA; and warming acupuncture might exert therapeutic effects [13].

TTX-R sodium ion channel current is mainly produced by NaV1.8 and NaV1.9 [14]. This current is formed due to inward sodium fluxing into cells. TTX-R sodium ion channel current is involved in depolarization activation of action potential and maintenance of cell excitation [15]. In addition, it also plays an important role in peripheral pain transmission [16]. The abnormal TTX-R sodium ion channel current may cause hyperalgesia, and trigger neuropathic and inflammatory pains [17,18]. DRG has both TTX-S and TTX-R sodium ion channel currents which play crucial roles in pathophysiology of different pains. TTX-R is mainly produced in sensory neurons and involved in pain transmission [19,20]. Especially, TTX-R plays important roles in the pathogenesis of chronic inflammatory and neuropathic pains [21]. DRG is a primary neuron in pain transmission and usually does not produce action potential spontaneously. With presence of inflammation, sodium channel is opened, and depolarizing sodium current is produced to form action potential, which causes frequent discharge, reduces threshold of mild pain and delays progression of inflammatory hyperalgesia [22,23]. The reduced threshold of sodium channel activation in neurons may cause frequent formation of action potential, signal transmission increase and cell excitation elevation, which further deteriorate cell swelling and cause cell apoptosis [24-26].

In WA group, TTX-R sodium channel current was still voltage dependent, suggesting that physiological voltage dependence of sodium channel remained unchanged. In the present study, density of TTX-R sodium channel current reduced in both WA group and PT group, but there was no significant difference between them. It is suggested that both warming acupuncture and pharmacotherapy exerted favourable therapeutic effects on KOA. And when reducing the number of open sodium channels, flow in the sodium ions is decreased, depolarization compensation of action potential is reduced, and the action potential cannot be triggered, refractory period of neurons cannot be extended, and signal conduction frequency is slowed. Meanwhile, the no longer decrease of TTX-R sodium channel current activation threshold causes NaV1.8 and NaV1.9 channel activation potential increase, thereby reducing the dorsal root ganglion discharge frequency. Overall TTX-R sodium channel current density is reduced, and neuron discharge frequency is reduced at the same time, which improves the high excitability of dorsal root ganglion neurons [27] and shows protective effect on neurons. Receptors of nociceptive transmission backbone of reflex arc are impeded, thus reducing the stimulation of pain signals in the central nervous system. The corresponding clinical symptoms are expressed as pain relief. However, combination use of warming acupuncture and pharmacotherapy required further studies.