Vitamin D deficiency is implicated in several medical conditions and has several beneficial physiological effects. The adequate daily intake of vitamin D is between 2000-4000 IU. Nowadays, vitamin D deficiency became a phenomenon among people in Taif. Therefore, to what extent vitamin D deficiency is associated with epidemics and immune system efficiency. A total of 101 (59 males) and (42 females) were recruited in this study. Sera were extracted on the first day to estimate vitamin D3, immunoglobulins, cytokines, complement proteins, rheumatoid factor and C-reactive protein as a baseline. Participants were given 4000 IU/day of vitamin D3 orally for twenty days. On the twentieth day, sera were extracted for same parameters evaluation. After twenty days of supplementation serum vitamin D3 levels increased by approximately four folds in most subjects. This increment was accompanied with a significant IgM levels increase (31% in females) and (28% in males) in which P values <0.05 corresponding to baseline, and a slight increase in IgA, C4 and C3. Inversely, serum levels of IgG significantly decreased in female subjects in which p value was 0.05< corresponding to baseline. Moreover, both interleukine-7 and tumour necrosis factor-α levels decreased for about 50% in both female and male participants. In conclusion, twenty days of 4000 IU/day of oral vitamin D3 supplementation can change vitamin D status from deficient to normal levels in individuals that assumed to be healthy. Vitamin D improves both innate and adaptive immunity and can prevent autoimmune reaction, and might serve as anti-inflammatory agent.

Vitamin D is a steroid compound called 1α,25- dihydroxyvitamin D3 [1α,25(OH)2D3] [1]. Vitamin D is a life essential in mammals especially higher animals [1]. This steroid is produced in the skin in most vertebrate animals as a prohormone [2]. Cholesterol is the initial precursor of vitamin D which is converted into 7-dehydrocholesterol in large quantities in the epidermal layer [3]. 7-dehydrocholesterol in turn undergoes photolyzation by ultraviolet rays at 9,10 carbon bond in the B ring to form a pre-vitamin D3 which spontaneously isomerized to Vitamin D3 [3]. There are two major forms of Vitamin D; Vitamin D2 which called ergocalciferol and Vitamin D3 which called cholecalciferol and both are fat soluble compounds [3]. In the other context, regulating blood calcium levels is controlled by parathyroid glands via a mechanism involves vitamin D which means that there is a clear relationship between Parathyroid Hormone (PTH) and blood levels of vitamin D [4]. Many studies over the last three decades have elucidated that vitamin D deficiency is implicated in several medical conditions such as multiple sclerosis, cardiovascular mortality and cancer incidence [5,6]. Some clinical reports demonstrated that vitamin D deficiency is associated with some pathological conditions such as rheumatoid arthritis, cardiovascular disease and inflammation [7-9]. Furthermore, deficiency of vitamin D was found accompanied with autoimmune disorders in Grave’s disease, ankylosing spondylitis, systemic lupus erythematosus, and in rheumatoid arthritis patients [7-10].

Vitamin D has anti-inflammatory and immune-modulating roles and plays other several biological roles such its role in cell proliferation, cellular differentiation and bone metabolism [6-8]. Serum levels of vitamin D have been found linked with cytokine production in both monocytes and macrophages in a pathway involved MAPK phosphatase-1 upregulation [11]. Moreover, vitamin D3 reduces proliferation of monocytes and decreases the production of several growth factors and immune mediators in a study involved human annulus cells [12]. The dietary allowance of vitamin D is 200 IU and that just to prevent the incidence of osteomalacia with the full absence of sunlight exposure [13]. However, more than that dose might be required to prevent more complicated cases such as osteoporosis, hyperparathyroidism, some cancers, osteoarthritis progression, multiple sclerosis, and hypertension [13]. The daily sun light exposure might provide approximately 10000 IU [14-16]. The collected data over the last two decades revealed that the adequate daily intake of vitamin D is between 2000-4000 IU [11,13,17,18]. On the other hand, elevated serum levels of vitamin D are related to hypercalcemia, renal lesions, low serum estrogen levels and sarcoidosis [19-21]. In the kingdom of Saudi Arabia particularly in Taif, vitamin D deficiency became a phenomenon which raised several questions up and whether vitamin D deficiency underlay some common epidemics in Taif or not so, the main purpose of this study is to examine the role of vitamin D in immune system in both female and male individuals.

Participants were divided sexually into female (42 volunteers), male (59 volunteers). All subjects were requested to sign the consent form that designed by Medical Ethics and Research Committee (MERC) and all were aged between 30-44 years old. On the beginning day, blood sera were extracted from participants to evaluate vitamin D levels and for quantitative screening of IgM, IgG, IgA, C3, C4, IL-7, TNF-α, IL-4, CCL2, CRP and RF. Throughout the study all participants had given orally vitamin D3 (4000 IU/day) for twenty days. To assess the status of vitamin D and other biomarkers, participants provided another blood sample at the end of the course.

Blood samples were extracted from each participant in a plain tube. Samples were centrifuged to separate serum at 3200Xg before processing.

Differences in serum levels of TNF-α, IL-7, IL-4 and CCL2 between baseline (vitamin D deficient) and after twenty days of oral supplementation: Serum investigation data for all participants at baseline and after twenty days of oral intake of vitamin D3 shows a striking decrease in TNF-α levels in both female and male groups for about 47% and 44% respectively, and that was statistically significant in male participants in which p value was <0.05. Similar outcomes in interleukin-7 which was decreased for about 51% and 54% as indicated in figure 1b. Inversely, Interleukin-4 was increased for about 100% in female subjects and 175% in males and smaller changes in CCL2 results 47% in females and 52% increase in male participants. 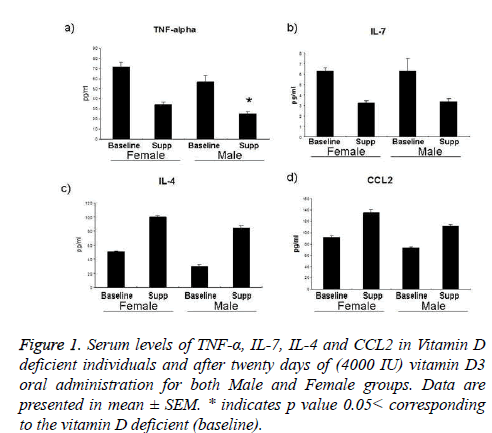 Nowadays, vitamin D deficiency became a phenomenon among population in Taif. The logic questions raised are to what extent lifestyle change can either improve or worsen the health status of individuals. In fact, vitamin D deficiency underlies several medical problems and thus this study became a very important step to ameliorate the public health in Saudi Arabia, Taif and over the world.

As shown in table 1 oral vitamin D3 supplementation reduced serum IgG levels for about 15% and 21.8 % in both male and female subjects respectively, and that was significant in females. In addition, serum IgM levels were significantly increased for about 38.7% and 44.6% in male and female subjects respectively. Serum levels of IgA, C3 and C4 were also increased after twenty days of oral supplementation in both sex groups. Consistent data was published in 1997 by Falkenbach and Seldmeyer where they found that exposure to ultra violet rays reduced serum IgG levels whereas increased serum levels of IgM, IgA and complement proteins [22]. Another study was performed on some chronic lung inflammation cases concluded that serum vitamin D3 levels are inversely associated with serum IgG levels [23].

Interleukin-7 is a lymphopoietic cytokines that required for peripheral lymphocyte homeostasis [24-26]. It is a potent regulator for T cell expansion and chronic inflammation and also plays a vital role in some autoimmune reactions [27-29]. In different context, IL-7 plays an inhibitory role in osteoclastogenesis [30]. Promising results are shown in figure 1b that oral vitamin D3 supplementation reduced serum IL-7 levels for about 50% in both male and female participants. These data might mean that vitamin D enhances immune response via its lymphopoietic role and might play other positive physiological roles in inflammation, osteoclastogenesis and as autoimmune preventer via IL-7 reduction. Similarly, vitamin D3 supplementation reduced TNF-α, a proinflammatory cytokine that is a lymphopoiesis stimulator as well [31-33]. Figure 1a clearly shows that serum TNF-α levels were reduced for about 47% in female subjects and significantly 44% in males after twenty days of vitamin D3 oral supplementation. Anti-inflammatory effect of vitamin D might be supported by data shown in figures 1a and 1d which tells that vitamin D supplementation increased serum interleukin-4 and CCL2 levels to about two folds in both male and female subjects [34-38].

Many studies have been elucidated the physiological importance of vitamin D3. One of such studies has mentioned that vitamin D insufficiency was major finding in patients with Grave’s disease [8]. Similarly, vitamin D deficiency is associated with rheumatoid arthritis, ankylosing spondylitis and systemic lupus erythematosus [7,10]. Moreover, Timms PM and his colleagues found that vitamin D supplementation reduced CRP and metalloproteinase-9 in healthy adults [39]. However, the current study does not show any significant changes in serum levels of both rheumatoid factor and Creactive protein after twenty days of oral supplementation and that might be due to either the very restricted criteria in participant selection or the positive effect of vitamin D via reducing both IL-7 and TNF-α levels and increasing the antiinflammatory cytokines IL-4 and CCL2.

We conclude that twenty days of 4000 IU of oral vitamin D3 supplementation can change vitamin D status from deficient to normal levels in individuals that assumed to be healthy. This elevation in turn, is accompanied with improvement in both innate and adaptive immunity and can prevent the autoimmune reaction via IL-7 reduction. In addition, vitamin D3 might serve as anti-inflammatory agent via reducing serum TNF-α and increasing serum levels of both IL-4 and CCL2. However, there is no change in serum levels of both rheumatoid factor and CRP that might be a consequence of serum cytokines change.

The authors would like to acknowledge and thank the Deans of Scientific Research Affairs in Taif University, Saudi Arabia for financial support of this study (project number 4092-36-1).