Twenty-one patients (14 women and 7 men) ageing 18 to 61 years were included in a prospective study during the last seven years. Upon admission they presented the clinical symptoms of intracranial hypertension: headache, psychical disorders and papillary edema without the signs of neurological location. The main symptom was diffused cephalous of a progressive nature over a period of several days to several months. The eye fundus examinations showed different aspects, from the incipient aspect of papillary contour blur to the manifestation of papillary edema with venous stasis. The imaging diagnosis involved cranio- cerebral CT and/or cranio-cerebral MRI (with and without contrast), which showed the absence of an expansive intracranial process, hydrocephalus and intracranial infection. Cerebral angio-MRI venous phases showed either there was cerebral vascular disease, such as cerebral venous thrombosis, venous sinus thrombosis or stenosis. In some cases for the diagnosis, angio=CT or cerebral Seldinger angiography was performed. The pressure of the CSF was determined by repeated lumbar puncture with manometry (3 to 4 times), performed after the exclusion of endocranial lesions that produce brain edema by CT or cerebral MRI exploration. In all patients, the following tests were performed: complete blood count, chemistry panel, prothrombin time, activated partial thromboplastin time, the composition of the cerebrospinal fluid with the cerebrospinal fluid proteins and the cellularity. The patients were followed for three months to one year after their diagnosis. All procedures were in agreement with the corresponding guidelines of the European Federation of Neurological Societies (EFNS) [8]. For statistical analysis, we used Mann-Whitney’s U test to compare the cerebrospinal fluid pressure values for patients diagnosed with idiopathic intracranial hypertension and the cerebrospinal fluid pressure values for patients diagnosed with vascular intracranial hypertension. A value of P < 0.05 was considered statistically significant. All the patients gave their written informed consent before the start of the study and the hospital ethics committee approved the study protocol.

The patients’ characteristics at admission and the findings are presented in Table 1. Patients were grouped into two categories. Twelve patients (3 men and 9 women of 18 – 51 years old) were diagnosed with idiopathic intracranial hypertension based on the clinical symptomatology and the paraclinical investigation results showed normal CT, or only small ventricles (Figure 1), normal MRI and normal angio- MRI including the venous phase. In addition, the cerebrospinal fluid had a normal composition with normal or reduced cerebrospinal fluid proteins and normal cellularity. The pressureof the cerebrospinal fluid was between 22 and 30 cm H2O. 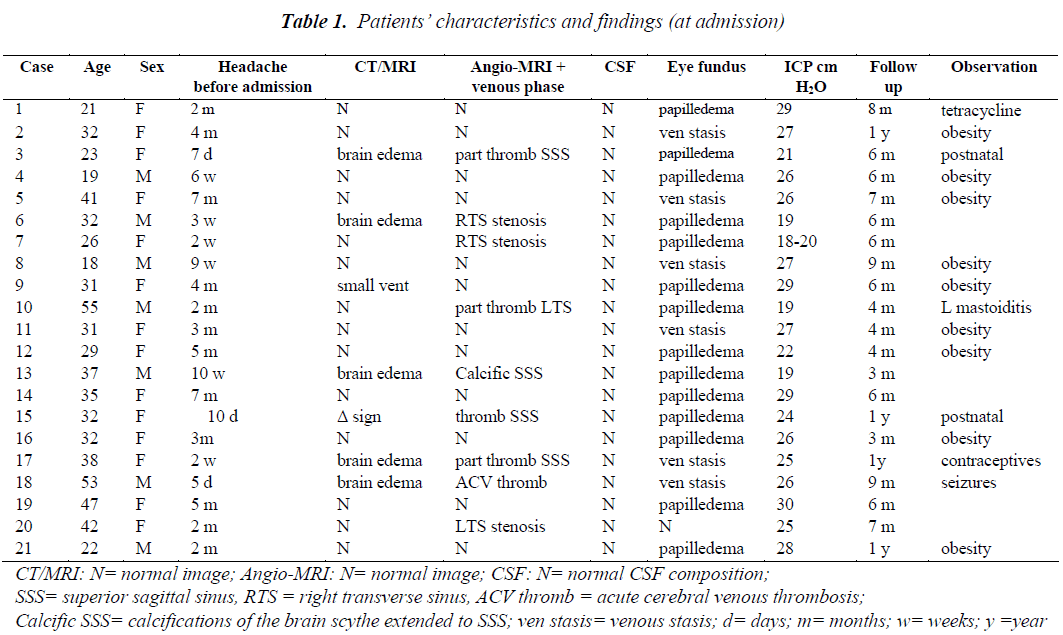 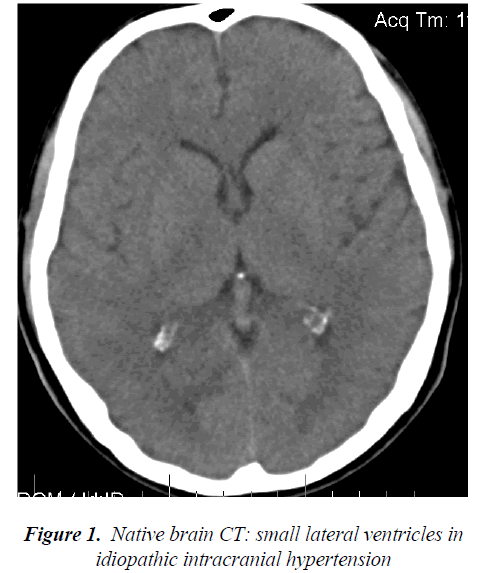 The treatment was individualized for each patient and consisted of the following:

- control of headache with analgesics (e.g., paracetamol and amitriptyline),

- acetazolamide, which reduces cerebrospinal fluid production, with control of the blood electrolyte levels,

- a weight-reduction diet for all patients, especially those who were obese,

- in two cases, only the drainage of cerebrospinal fluid by lumbar puncture was sufficient to control the symptomatology,

- in one patient, progressive visual loss in one eye responded well to oral prednisone.

The treatment during hospitalization spanned between 2 – 4 weeks with clinical improvement, including the resolution of papilledema and the CSF pressure returned to 10 to 12 cm H2O. In addition, the brain MRI was normal. There was no need for surgery to correct the visual function deficit. The patients were observed every 4 weeks after discharge, and follow-ups were conducted from 3 months to 1 year. There were no major complications, and the patients appeared to be stabilized. The visual function of all patients was also normal at the end of the follow-up period.

Nine patients (4 men and 5 women of 23 to 61 years old) were diagnosed with intracranial hypertension caused by intracranial vascular damage, such as acute, sub-acute or chronic thrombosis of the superior sagittal sinus, transverse sinus stenosis or acute brain venous thrombosis. The brain CT (native, contrast and angio-CT) showed brain edema in five cases, and the empty Δ sign in one case showed thrombosis of the superior sagittal sinus (Figure 2, 3). The MRI and angio-MRI with venous phase showed characteristic images of thrombosis or partial thrombosis of the intracranial venous sinus in five cases, of stenosis of the transverse sinus in three cases, and of acute cerebral venous thrombosis in one case (Figure 4, 5, 6). The pressure of the cerebrospinal fluid for each patient was between 19 and 26 cm H2O. 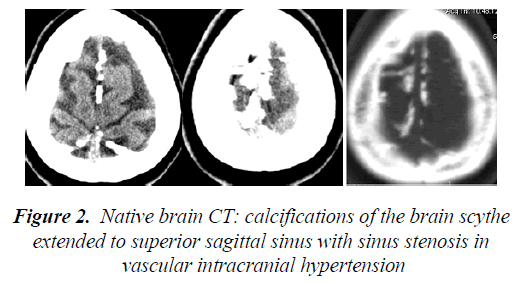 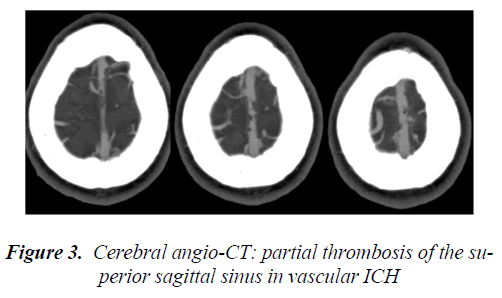 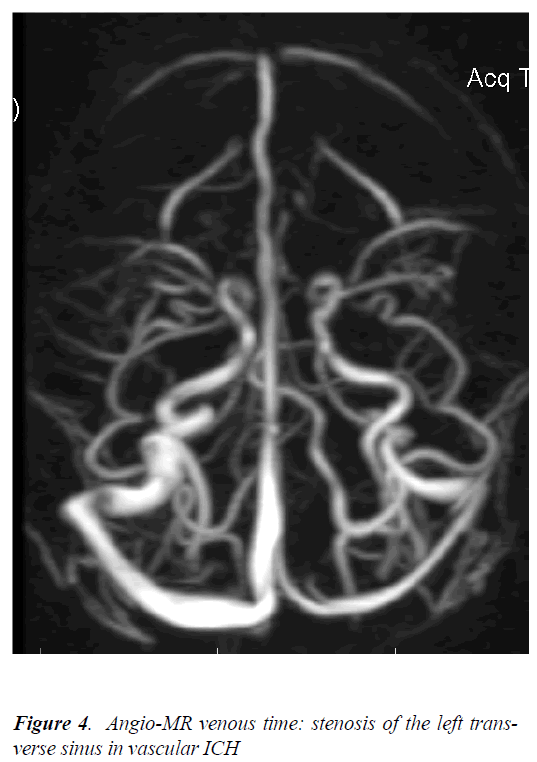 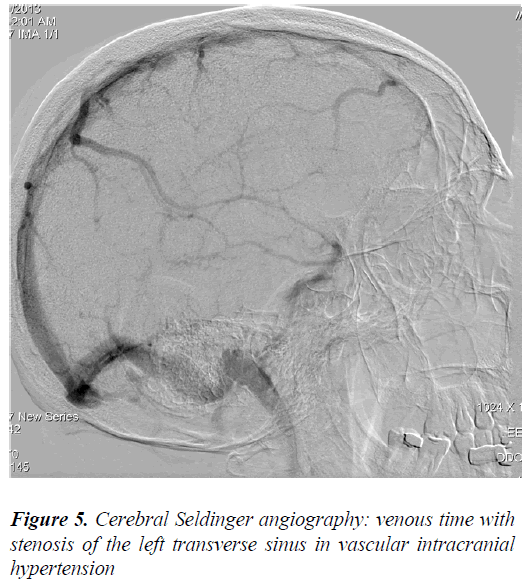 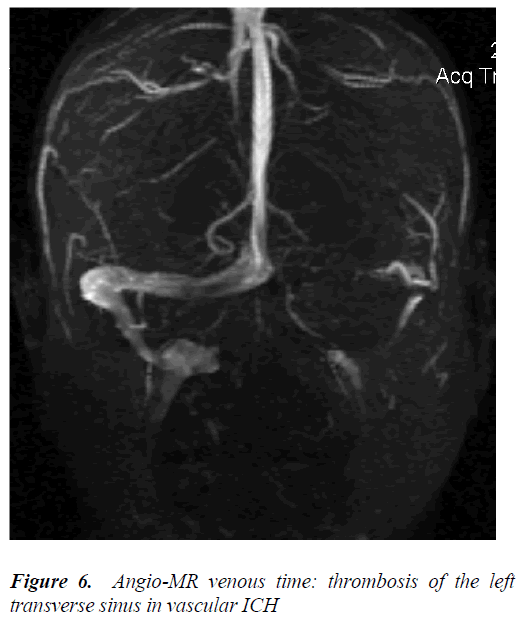 The treatment began immediately and mainly consisted of the following:

- antiepileptic drugs for seizures in the case with acute cerebral venous thrombosis,

- antibiotics in the case with left mastoiditis and partial left transverse sinus thrombosis,

Hospitalization of t he patients lasted for 3 – 5 weeks with Clinical improvement after the therapy, including gradual improvement of the papillary edema. The pressure of the cerebrospinal fluid, which was determined before discharge, was between 7 and 11 cm H2O. The MRI after the treatment and before discharge showed partial recanalization of these dural venous sinuses. The follow-up period was 1 month to 1 year.

The patients included in this study had headache, different stages of papilledema, elevated CSF pressure on lumbar puncture and normal CSF composition. The cerebral CT and MR images did not show a tumor, hydrocephalus or other etiology, and the diagnosis remained pseudotumor cerebri. According to Foley’s classic definition, Dandy’s diagnosis criteria modified by Wall and Friedman and Jacobson’s diagnosis criteria, one of the diagnostic elements is the non-identification of a cause for the intracranial pressure increase [2,7,9-12]. Idiopathic intracranial hypertension partially corresponds to this historical designation of pseudotumor cerebri, and because of the absence of a clear etiology, idiopathic intracranial hypertension is a diagnosis of exclusion [13].

In this study, which included 3 men and 9 women diagnosed with IdICH, the men were young (18,19, and 22 years old) and obese, whereas six women displayed obesity and a young woman of 2-year-old who used oral tetracycline for acne as possible associate factors involved in the development of idiopathic intracranial hypertension. Female sex predominance was evident, and no other factor possibly involved having an etiological relationship with ICH, which is consistent with the data from the literature. The treatment was only symptomatic.

Four men and 5 women, aged between 23 and 61 were diagnosed with vascular ICH, and anamnesis. Imaging findings indicated the cause of the increased intracranial pressure. Two young women presented a clinical syndrome of intracranial hypertension during the postnatal period and were diagnosed with partial thrombosis of the sagittal superior sinus. These two patients displayed good results after the treatment and were followed up for 6 months to one year after their discharge. A 61-year-old man presented with chronic mastoiditis and developed a lateral venous sinus thrombosis on the same side (Figure 6). This patient responded well to antibiotic and anticoagulation therapy.

A 53-year-old man presented with acute intracranial hypertension syndrome of five days duration before admission, and he was diagnosed with acute cerebral venous thrombosis with some characteristics of thrombophlebitis. He also presented with seizures, and the treatment immediately solved the syndrome. He was followed up for nine months with good results. A 47-year-old man had progressive intracranial hypertension syndrome for 10 weeks, and the imaging diagnosis showed calcifications of the brain scythe extending to the superior sagittal sinus, with sinus stenosis (Figure 2) he had only symptomatic therapy. These calcifications obviously occurred over time, with some event triggering the ICH syndrome, which might have been the degree of venous sinus stenosis. The other patients had partial thrombosis of the superior sagittal sinus, and anticoagulation therapy provided good results with partial recanalization of these dural venous sinuses.

Although the symptoms may be similar in these two diseases, the imaging findings, therapy and evolution are different; therefore, the etiology and pathogenesis are different. Vascular ICH has a known etiology, such as cerebral vascular illness (e.g.,venous sinus thrombosis, venous sinus stenosis and cerebral venous thrombosis), whereas idiopathic ICH has no known etiology or has various nonspecific factors, such as associated factors or confounding conditions (e.g., metabolic and endocrine disorders, hypovitaminosis A and medications). The imaging diagnosis for vascular intracranial hypertension showed a cerebral venous sinus thrombosis or stenosis or a cerebral venous thrombosis in vascular ICH and either normal images or small ventricles in idiopathic ICH. The imaging diagnosis of idiopathic intracranial hypertension excludes other diseases with similar symptoms.

Vascular ICH may potentially include other syndromes, such as hypertensive encephalopathy, but this classification requires further study. In hypertensive encephalopathy, there is a dilatation of brain arteries with increased arterial inflow, increased vascular permeability, and disruption of the blood-brain barrier, which leads to brain edema [27,28].