Variation and distribution of qualitative traits of the savannah muturu on free range in the Benue trough of Nigerian.

The study was carried out at two council wards each in Logo and Tarka local government areas of Benue State, Nigeria. The study was designed to investigate qualitative traits variation and distribution within and between populations of the savannah muturu herds on free range under rural farmers. There were coat color variations of solid black, solid brown, dominating black with irregular distribution of white patches, dominating brown with irregular distribution of black and white patches, dominating white with irregular distribution of black patches, coat colors of irregular black and white patches of uneven distributions, restricted color patterns of black and white, brown and white, and white and black. There was wide deviation from reported coat color patterns of the savannah muturu of multiple coloration, ebony, faun, white and black patches of equal dimensions and uniform distribution over the entire body. It was evidenced that the coat color genes of the savannah muturu cattle under rural farmers had undergone divergence due to inbreeding, random sampling, counter selection and genetic drift.

Muturu breed; a variety of the West African short horn is known as the Nigeria short horn. The Nigerian muturu cattle breed is categories into two groups; the forest muturu in the south-west and savanna muturu in the middle belt and Eastern parts of the country [1]. Its relatives, the Liberian dwarf found in Liberia and Bakwiri found at the foot of mount Cameroon in South-West Cameroon. There is no much information about these breeds as they are sometimes classified as almost extinct. Muturu cattle are reared on free range for traditional ceremonies such that ritual restrictions surround their management [1]. The males are often slaughtered for ceremonies or for sales. The breeding potential of the muturu is challenged even under traditional management due to small herd sizes and management conveniences. The muturu cattle can sustain productivity under tsetse-stressed environment on free range without feed supplementation. During the Nigerian civil war, 1967-1970, it was recorded that many muturu cattle were slaughtered to feed the starving human population. They were thus decimated both during and immediately after the civil war [1]. Muturu have an important place in traditional culture and this affects their management and marketing [1].

The trypanotolerant muturu cattle breed is one of the least known cattle breed in West-Africa. Its distribution, morphological characteristics and performance have received little publications [1]. Early reports showed that the muturu were once distributed widely across the West-Africa sub region until the Fulani invasion of 1820 [2]. The muturu were found in all coastal countries and also in the southern part of Upper Votta (Burkina Faso). The muturu originated from the shorthorn hump less (Brachyceros) cattle which appeared in ancient Egypt in the middle of the second millennium and were first recorded in West Africa during the second half of the first millennium. This breed are found in west-Africa coastal regions, heavily infested with tsetse flies and as a result through adaptation and selection have become tolerant to trypanosomosis, resistant to ticks and tick born disease [3].

Morphological characterization of muturu cattle revealed color shades of ebony black, faun, black and white, black with white patches, white with brown or black spots of varying frequencies ranging from 39-90 percent [1-4]. There are two groups of muturu breeds in Nigeria, the savannah muturu which is the larger type and the forest muturu, the dwarf type which appears to have evolved through adaptation to the humid forest environment. Body size is the only distinction between the two strains as they are both called muturu. These breeds often possess unique genetic potential that enable their survival in a diverse range of production environment with intense stresses. The genetic diversity of indigenous livestock breeds provides mitigation to the impacts of climate change and a new growing consumer demands. Breed characteristics studies establishes reliable estimates of gradual morphological divergence and structural variations between breeds populations. Changes in breed characteristics are indicators of genetic resource divergence or dilution. In animal populations managed under rural farmers, changes in breed characteristics could be detrimental as these may either be due to loss of alleles due to random sampling or loss of heterozygosity due to inbreeding. A combination of allelic differentiation through random sampling and genetic drift accelerated by natural selection in small populations could modify or even eliminate known breed characteristics. Known qualitative characteristics may also be affected by genetic dilution through indiscriminate crossbreeding and high rate of inbreeding enhancing allelic frequencies differentiation, genetic divergence and drift [5-10].

The Nigerian muturu cattle breed had received little research attention even though the breed plays significant roles in cultural values and rural communities source of livelihood. The loss of the genetic resources of the savannah muturu will no doubt reduces opportunities to develop rural economics as well as loss of products and services preferred by local people. The value of the savannah muturu cattle breed must therefore, be considered within the broader context of sustaining rural communities and their existing economic foundations.

There is no much research reports on the performance characteristics of the savannah muturu. It is however no doubts that, their populations must have undergone severe pressures from the zebu cattle, climate change impact, modernization and poor economics of production driving force such that their populations must have declined over the years. Farmers counter selection of superior animals for use will also play a significant role in the loss of alleles from the populations. It is important to note the status and trends of animal genetic resource divergence of indigenous animals under rural farmers, because they are the only custodian of the indigenous livestock genetic resources who lacks the capacity to manage these genetic resources for sustainable use. The objectives of this study were to investigate variations in qualitative traits and their distributions between and within populations that characterized the savannah muturu cattle in Nigeria, with a view to highlight current qualitative traits that characterizes existing populations of the Nigerian savannah muturu [11].

This research work was carried out at Ayilamo–Tombo council ward in logo and Tarka local government areas of Benue State. Ayilamo is a rural community located at a boundary between Wukari of Taraba State in Logo Local Government of Benue state. The study also included some selected locations in Tarka local government such as Mbaayogh, Mbakyagh and Mbahar council wards. The community is located at latitude 70 461 21’’ N and longitude 90 71 29’’ E with an altitude of 217 m. It has temperature range of 24°–32°C, and a relative humidity of 65% to 82%, precipitation of 35%-40% [12]. The terrain in the environment is generally very variable with Neutral soil pH (5.5– 8.5) there is natural vegetation of tree cover making up 45%.

Experimental animals and their management

The animals that were used for the research were savannah muturu cattle comprising both sex and ages. The total number of the animals used for the research were 138, comprising of 35 number of males and 103 number of females. Out of the total number of the animals, thirty six (36) were calves, nineteen (19) were breeding bulls, 56 were breeding cows and twenty seven (27) were heifers. There was no castrated bull among all the samples. The populations were drawn from Logo and Tarka local government area of Benue State [13]. The animals were managed under free range with no supplementary feeding, there is no evidence of veterinary care for the animals.

Physical assessment of body coat color of individuals were taken using digital camera and phenotypic identification. One on one discussion and oral interview with the farmers was carried out for obtaining information from farmers. GPS Gadget and camera were used to identify location and for photographing of color patterns respectively.

Parameters that were measured

The data collected from the study were subjected to descriptive statistics. 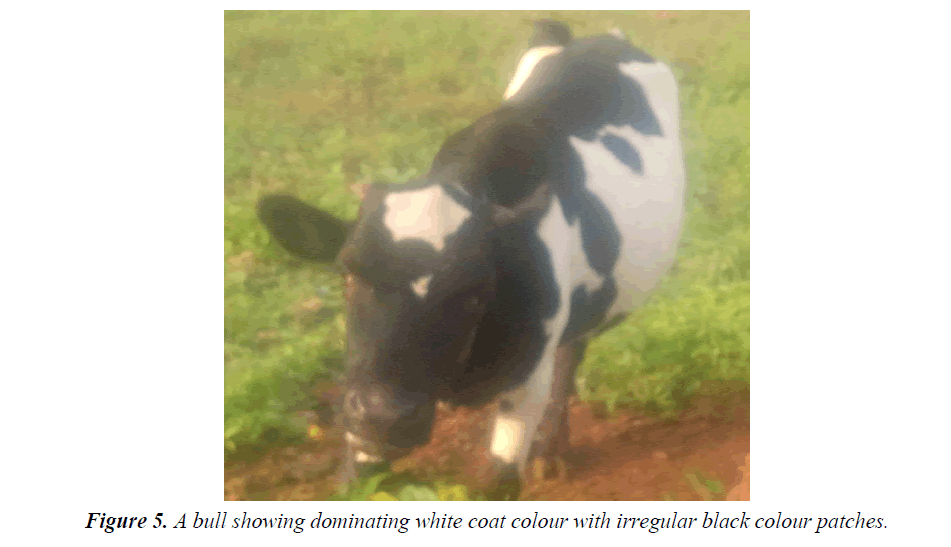 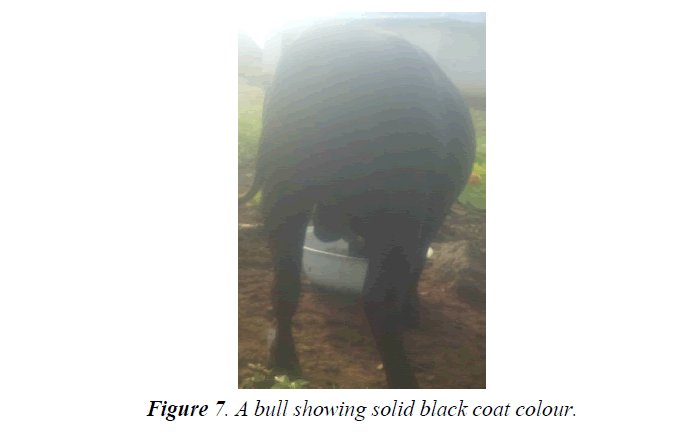 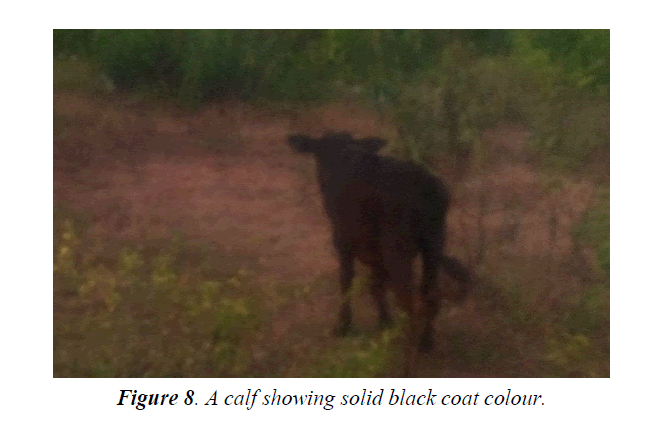 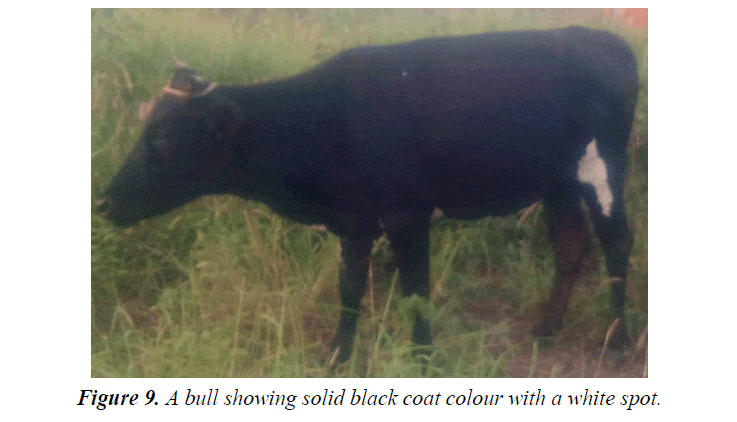 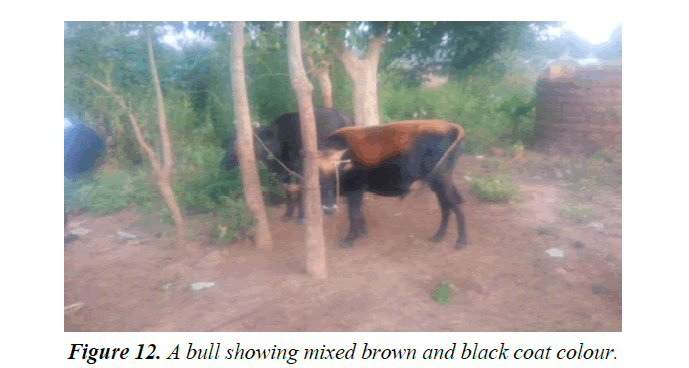 Figure 14: Distribution Coat color of the savanah muturu in Benue state of Nigeria. 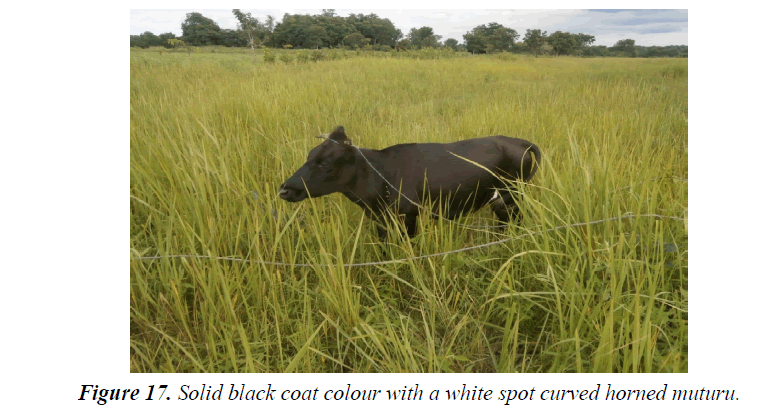 Distribution of horn types of muturu in Kwande local government area of Benue state: Distribution of horn types, (presence, absence, types and orientation) of savannah muturu cattle in Kwande local Government area of Benue state, animals with horns constituted 72.1% , those without horns constituted 27.9%. In the seventy two percent (72.1%) that had horns, about thirty five percent (35.34%) had straight horns (Figures 4,5,8,9,14) while about sixteen percent (16.53%) had curved horns (Figures 3,10,13,14) About one percent (0.72%) animals had cork-screwed horn orientation (Figure 6). None of the animals had spiral horn type [14]. 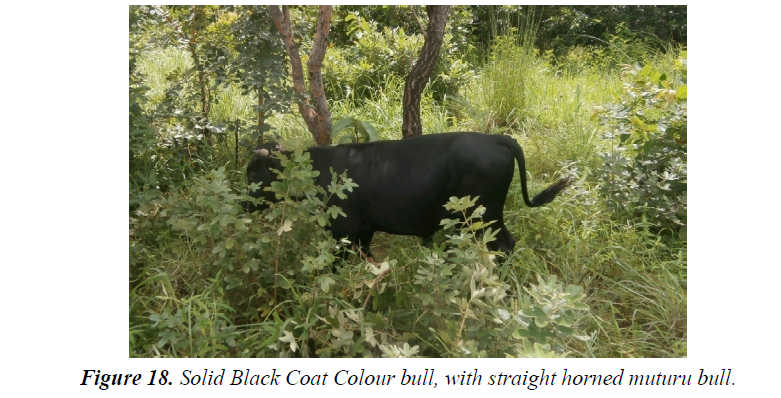 Distribution of qualitative traits of muturu cattle in the studied population

This variation in color patterns of the savannah muturu in this study could be attributed to high rate of inbreeding and uncontrolled crossbreeding with the zebu cattle. The animals with one color dominating other colors with unequal and undefined pattern of distribution over the entire body could be crossbreds with the zebu cattle. Animals with multiple color patterns with near uniform distribution and sizes and those with solid colors could be inbreeds. This is so because, since coat color is a qualitative trait, controlled by a pair or few pairs of genes and are not affected by the environment, the loss of characteristics coat coloration of the savannah muturu would only occur when genes responsible for these colorations are lost. This could only occur through crossbreeding when these genes are mask or through inbreeding when they are lost due to random sampling, allelic drift and natural selection. It is reasonable to infers that the population of the savannah muturu under rural farmers in the Benue trough of Nigeria are highly inbreeds and crossbreeds of the zebu cattle. This is valuable because members of different populations could be used in strategic breeding program design to improve and conserve the genetic resources of the savannah muturu in Nigeria with high selection response. It is also important to note that the coadapted gene complexes of the savannah muturu had not been lost as indicated by their existence and performance under rural farming communities. This result indicated that the genetic resources of the savannah muturu had not been lost over the years. The genetic uniqueness of the breed though diluted is still abounding in herds maintained among rural farmers. Certain qualitative characteristics have been lost or modified due to allelic differentiation through random sampling, drift, genetic divergence, inbreeding and crossbreeding (Figures 20-24). 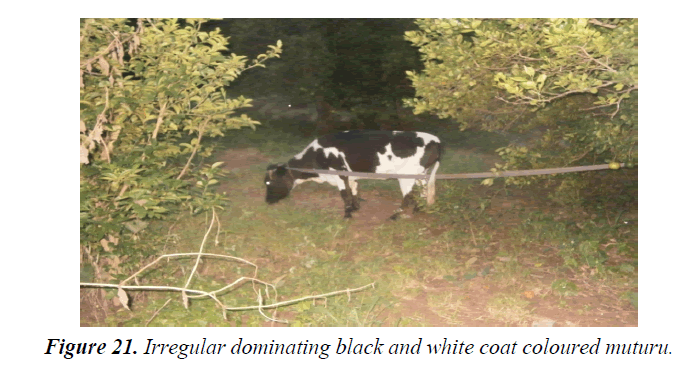 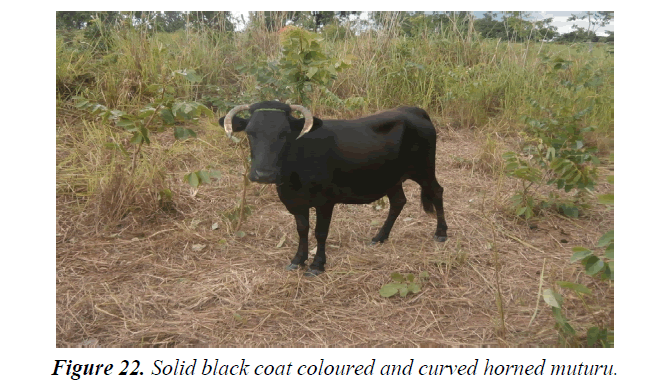 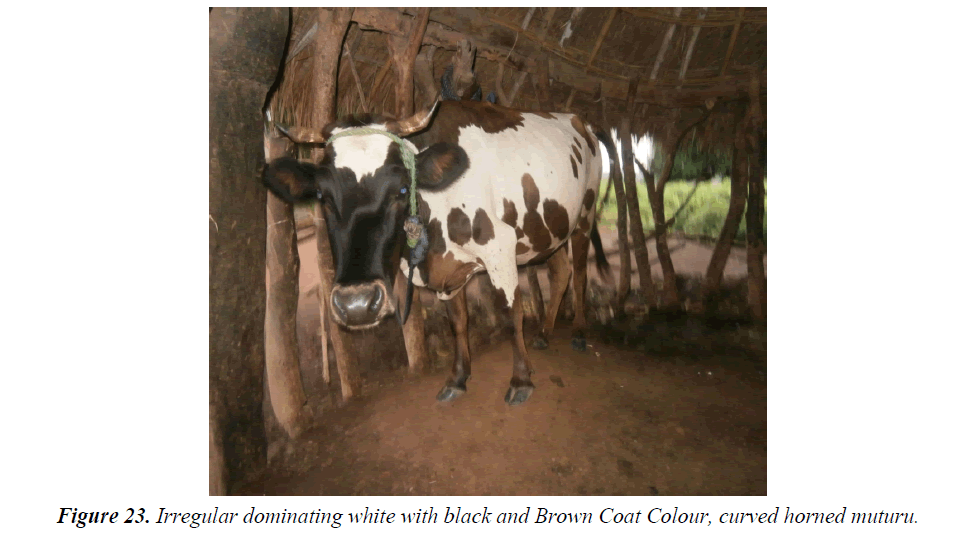 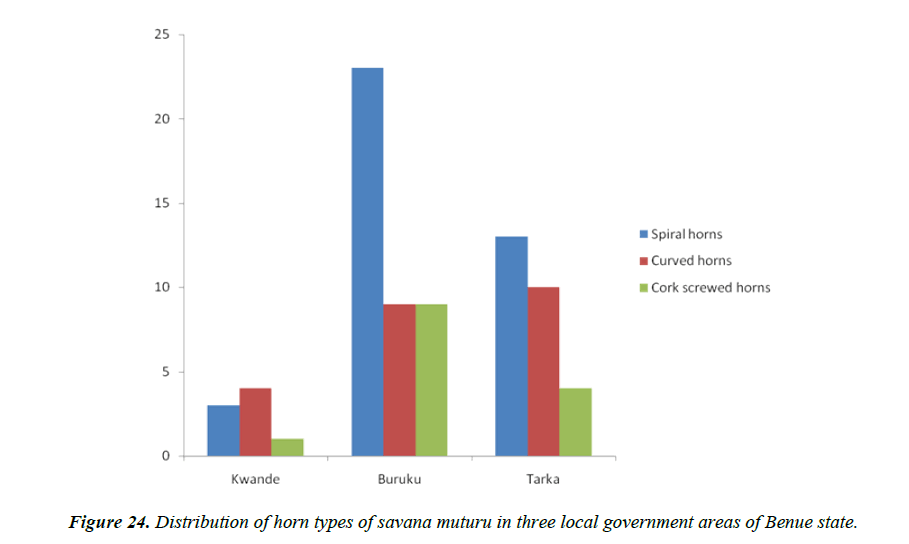 Animals with horns constituted 72.1%, while those without horns constituted 27.9%, 29 out of the animals that had horns, the distribution were straight horns, curved horns and cork - screwed horns. This observation was also reported by Adebambo [1]. This result indicated that the genetic resources of the savannah muturu that influenced horn types still existed among rural herds despite climate change impact and other genetic erosion pressures on the breed over the years. The existence of the genetic resources of the breed enhancing horn profiles in rural muturu herds attest to the maintenance, capacity and potential of the co-adapted gene complexes for current and future adaptation of the breed on free range among rural farmers [15-18].

Following the result of the study, the following conclusions were drown.

1. There was wide variation between reported qualitative and current qualitative traits observed on current populations of the savannah muturu under rural farmers.

2. There was genetic divergence on influence of genes influencing coat colors. These divergence was distributed throughout the rural muturu populations on free range under rural farmers.